Consciousness and Knowledge of Nursing Home Workers About Oral Malodor

Copyright: © 2016 Ishii A, et al. This is an open-access article distributed under the terms of the Creative Commons Attribution License, which permits unrestricted use, distribution, and reproduction in any medium, provided the original author and source are credited.

An increasing number of elderly people in Japan are living in nursing homes. Some of them have strong breath odor, which makes it difficult for the facility workers to perform oral care service.
A questionnaire survey was conducted to examine how often the facility workers experience the residents’ oral malodor. The knowledge and consciousness of workers about oral malodor were also examined. Some workers actually experienced oral malodor of the facility residents and hoped that their breath odor could be reduced. The workers understood the causes of oral malodor, but the importance of saliva flow was not well recognized. On the other hand, more than 80% of workers expressed concern about their own breath odor while providing oral care. Nearly 80% of them want to get more information on oral malodor.
The results of this questionnaire survey showed that oral malodor is an important matter at care facilities for the elderly, and instruction on oral malodor is necessary for facility workers.

Many people today are concerned about their breath odor, and there have been many surveys on this topic within the general population [1]. Yaegaki et al. conducted a questionnaire survey of young women in Japan, examining their behaviors and perceptions of oral malodor [2]; Al-Ansari et al. also examined self-reported halitosis in Kuwaiti patients [3].

An increasing number of elderly people in Japan are living in nursing homes. Workers in those facilities provide oral care to the elderly residents. Some nursing home staff members are known to have stress due to the dementia [4] and violence [5] of their residents. They may also have difficulties in conducting their job because of the strong breath odor of the oral care recipients. The workers may think that the breath odor needs to be reduced. No research efforts, however, have examined the elderly persons’ consciousness of their own oral malodor. We also do not know how much knowledge the workers have about breath odor control. A questionnaire survey was conducted to examine the consciousness of workers at facilities for the elderly. Their knowledge about breath odor was also examined.

The nursing home is located in Oita Prefecture of Japan. The number of residents is 150 and the number of workers is 96. We asked the workers to fill out the anonymous questionnaire sheet. Out of 96 workers, 82 returned complete answer sheets (ratio of valid response is 85.4%). This survey was approved by the facility’s ethics committee and written informed consent was obtained from the workers.

About 68% of workers were females in their twenties to sixties (Figure 1). More than 77% of workers experienced oral malodor from facility residents, but only a limited number of those residents had strong oral malodor (Figure 2). About one third of workers felt stress in coping with the malodor of residents, and they hoped that the oral malodor could be decreased (Figure 3). 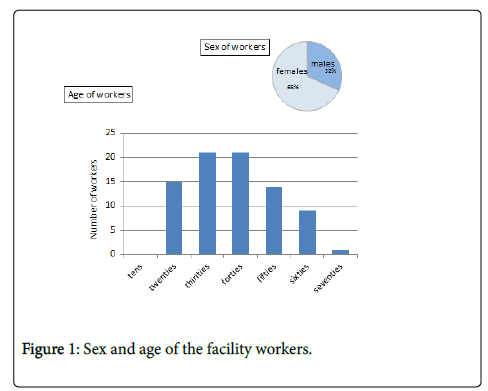 Figure 1: Sex and age of the facility workers. 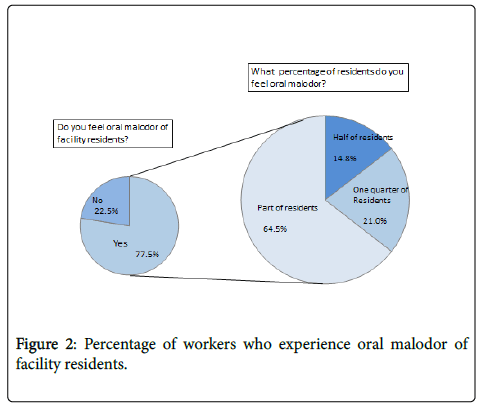 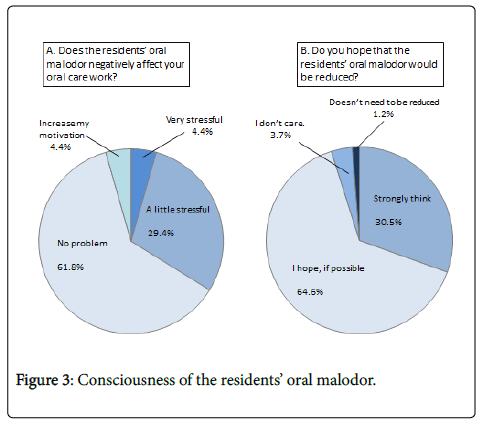 The workers’ knowledge about oral malodor was investigated. The workers knew that dental caries, uncleaned dentures, and periodontitis were major causes of oral malodor (Figure 4). However, stomach diseases were considered more important than dry mouth. Some respondents thought too much saliva flow causes oral malodor. Next, the survey asked respondents for their ideas to reduce oral malodor. They understood that denture cleaning, tongue scraping, and tooth brushing were effective in reducing oral malodor (Figure 5). However, fewer than half of the workers thought that preventing dry mouth—by methods such as massage of saliva glands, drinking tea, and use of oral moisturizer—were effective. 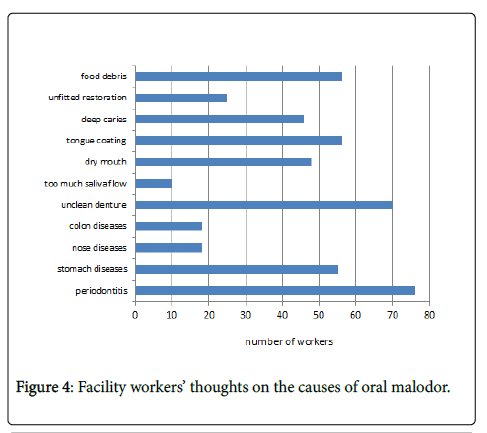 Figure 4: Facility workers’ thoughts on the causes of oral malodor. 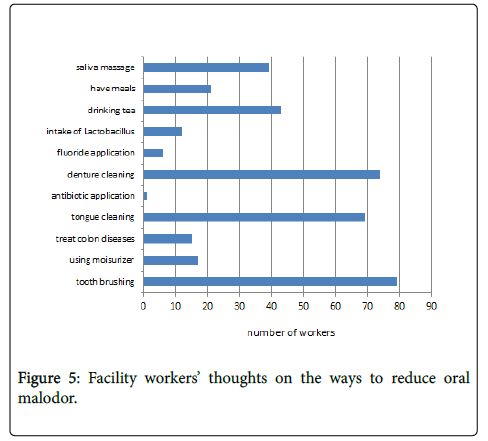 Consciousness of their own oral malodor

More than 80% of workers worried about their own breath odor when they provide oral care to their residents (Figure 6A). Nearly 80% of them want to receive information on oral malodor (Figure 6B). 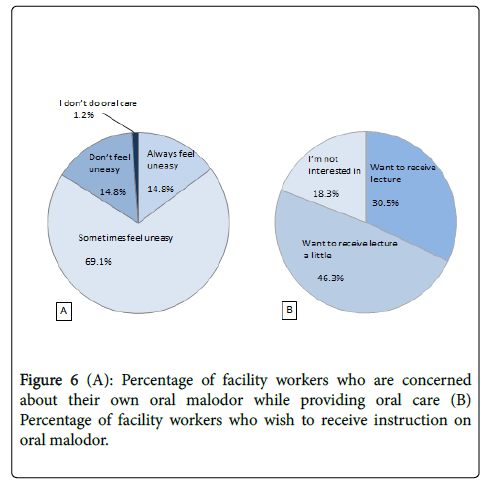 The effectiveness of oral care for preventing pneumonia was reported [6], and the importance of oral care for the elderly is increasing. Oral care is performed very close to the mouth, so the strong breath odor of elderly recipients may annoy oral care workers. Poor oral hygiene, periodontal disease, uncleaned dentures, dry mouth, and deep caries are the main causes of oral malodor [7], and these conditions are getting worse in elderly people. Dry mouth is considered particularly significant in producing oral malodor [8].

Many nursing home workers experienced the oral malodor, but the number of elderly persons who had strong oral malodor was limited. The oral malodor seemed not to be necessarily a common problem among the elderly, and only some elderly persons may have oral problems known to contribute to the condition. In this work, only the workers’ reports were obtained, so we need to measure breath odor and examine the oral conditions of the residents in the future. About one third of workers felt stress due to the residents’ oral malodor, and they hoped that the oral malodor could be decreased. For this purpose, it is necessary to understand the causes of oral malodor. The workers knew that tongue coating, unclean dentures, and periodontitis were major causes of oral malodor. However, they believed that stomach diseases were more important than dry mouth. Moreover, some of them thought too much saliva flow causes oral malodor. Saliva is important in reducing oral bacteria and oral malodor [8], and preventing dry mouth is considered to be effective in reducing breath odor, but the importance of moisturizing the oral cavity was not well recognized by the facility workers.

It is interesting that the workers also worry about their own breath odor in performing oral care service. They consider oral malodor to be annoying whether they are producing it or experiencing it during oral care. The results of this work showed a clear desire among facility workers for more information on oral malodor. It is important to give them the basic knowledge about this embarrassing condition and the ways to reduce it.