A decline in the incidence of infantile hypertrophic pyloric stenosis (IHPS) was recently reported in Sweden, the US, Denmark, Scotland, and Germany. Data to explain this phenomenon, however, are scarce.

Data were extracted from the public report of health (Gesundheitsberichterstattung des Bundes) and population data from federal state governments. We obtained the numbers of IHPS (ICD-10 code 40.0) and live births in each federal state for the period 2000-2008.

Further data were collected from federal state administrative agencies on age of the mother at the birth of their first child and history of migration for all mothers at first birth.

There were significant differences in the regional distribution of both variables and the variability of these factors over time. Average maternal age and the percentage of mothers with a history of migration showed a negative correlation with the regional incidence of infantile hypertrophic pyloric stenosis.

Conclusion: The wide variation in the incidence of infantile hypertrophic pyloric stenosis over time and for different regions is significantly inversely correlated with rising maternal age and the percentage of mothers with a history of migration.

Infantile hypertrophic pyloric stenosis (IHPS) is caused by postnatal progressive hypertrophy of the circular muscle layer of the pyloric muscle with progressive gastric outlet obstruction. Clinical symptoms, including projectile vomiting and failure to thrive, usually appear within the first two months of life [1,2]. Boys are affected significantly more often than girls (4-5:1). The most common treatment is surgical pyloromyotomy [3,4], although conservative treatment is still discussed by some authors [5].

A decline in the incidence of this condition has been reported in Sweden [6], Scotland [7], The US [8], Denmark [9], Germany [10] and several other European regions [11]. The reason for this decrease remains unexplained; therefore, epidemiologically derived hypotheses are valuable.

Based on studies in siblings and the offspring of patients with IHPS, the estimated risk is up to 30-fold higher in siblings of affected children and five times higher in offspring [13]. Preterm delivery is associated with the later onset of clinical symptoms but not with an increased overall risk [12]. Based on the available data, the time at which clinical symptoms first present seems to be related more to post-conceptional than to postnatal age [13].

The use of erythromycin as a contributory factor has been investigated given its known ability to facilitate gastric emptying via its activity as a motilin agonist. Data on maternal use of erythromycin in pregnancy did not yield an increased risk [14], although postnatal use during breast-feeding led to different results. A large Scandinavian study found an odds ratio of 2.3-3.0 in mothers who used erythromycin while breastfeeding [15].

The available data suggest a decline in risk with rising birth rank, with the highest risk being for the first-born. However, birth rank and maternal age are considerably interdependent [13]. For example, in a large study conducted in California, for children born to mothers who were 35 years of age or greater, there was no significant role for birth rank [12].

In this study, data from German regions on maternal age and history of migration (as a surrogate for ethnicity) were analyzed to explain the observed decline in IHPS incidence in the period from 2000-2008 [10].

This study was based on routinely collected population-based data from the German federal reporting system on health. The data are reported and coded based on the International Statistical Classification of Diseases and Related Health Problems, 10th revision (ICD-10). We examined the number of IHPS (Q 40.0) cases and the number of life births (LB) for each federal state in Germany in 2000-2008, grouped by gender. Further data were collected from the regional administration of all German states by direct contact or email contact and extracted from regional statistical records on the average age of mothers at the birth of their first child and history of migration in all mothers at first birth statewide for each year from 2000-2008.

We compared incidence over time using the Wilcoxon-related pairs test. We compared the incidence rate, percentage of mothers with a history of migration and the average maternal age in different states using the Kruskal–Wallis test and the Mann Whitney U Test where appropriate. The correlation was calculated using Spearman’s correlation between IHPS incidence and percentage of mothers with a history of migration and between IHPS incidence and average maternal age at the birth of their first child. Multiple regression analysis was performed with both variables included. We set the significance level to 5%. Statistical analyses were performed in Statistica 10 (StatSoft, Tulsa, OK, USA) and R Studio Vers. 0.98.501 (The R Project, Boston, MA).

From all regional administrative offices, data could be obtained for average maternal age at first birth as demonstrated in Table 2.

The average age increased from 28.89 years in 2000 to 29.73 years (p<0.01). There were significant regional differences, with the lowest average age during the 2000-2008 period being 27.57 years in Mecklenburg-Vorpommern and the highest being 30.53 years in Baden-Württemberg. The range over all regions was remarkably small. Table 4: Spearman correlation for average maternal age, percentage of mothers with a migration history and IHPS incidence in the years 2000-2008

When analyzed over the different regions, the correlation was not as clear, although the relationships between average maternal age and IHPS incidence, as well as that for percentage of mothers with a migration history and IHPS incidence remained significant for the whole of Germany and for select regions within Germany (Table 5).

In multiple regression analysis, there was a significant influence of time, average maternal age in a region, the percentage of mothers with history of migration and IHPS incidence. (b= -0.288, - 0.354, and -0.199, respectively; each p<0.05).

Recently, numerous reports have shown a decline in IHPS incidence in various regions of the world, with dramatic decreases in Denmark and Sweden [6,11,16,17] Epidemiological cues have been used to suggest partial etiological explanations.

In general epidemiological information has to be handled with care especially if there are some severe limitations like in this study:

The data collected is aggregated from federal agencies, therefore no single case perspective can be taken and no additional data is available, like the use of erythromycin, the rate of mothers breastfeeding, the ethnicity of the mothers and socioeconomic factors.

Since the data is collected from various sources the integrity could be compromised by families moving within Germany, biases like under- or overreporting and miscoding.

Treatment is almost always surgical, therefore the risk of underreporting in families who do not seek medical care seems rather small.

In this study and in our previously presented data, we found high variability over different regions and time periods in Germany, and the significant decline in IHPS incidence observed for all of Germany was noted to reflect a decline in nearly all individual regions [10].

The previous hypothesis that IHPS might be correlated with SIDS was based on data presented by Persson et al. They speculated that the parallel decline in SIDS and IHPS incidence could be attributed to the campaign against prone sleeping positions [6].

However, European data have indicated that, after the implementation of these recommendations in various European countries, the incidence of IHPS did not decline as expected; in fact, higher incidence rates were reported in Styria and the Northern Netherlands [11].

Young maternal age appears to be a risk factor based on recent epidemiological data from the European surveillance of congenital anomalies (EUROCAT) [11].

In addition, ethnicity is thought to play an important role in the incidence of IHPS. While in the middle of the 20th century, IHPS was common in western industrial countries, it is almost unheard of in other parts of the world [13].

A potential reason for this finding is the impaired diagnostic ability noted in developing countries (e.g., the absence of an ultrasound) as well as the need to pay closer attention to other causes of infant morbidity and mortality [13], although a lower incidence of IHPS was also found in technically advanced countries such as Taiwan [18]. A study from California found a significant influence even under identical environmental conditions. In the California study, the observed incidence of IHPS was 1.9 per 1000 live births (/1TLB); in Caucasian subgroups, the incidence was 2.4/1TLB; in Hispanic subgroups, the incidence was 1.8/1TLB; in Afro-American subgroups, it was 0.7/1TLB; and in Asian subgroups, it was 0.6/1TLB [12].

We speculated that the variability in the reported incidence data and time trends from different parts of the world might be explained by differences in maternal age as well as ethnic diversity and that these variables could also be important influences on the regional distribution and time trends for IHPS.

Our data support the influence of these variables because even at the aggregate data level, there was a significant correlation. The correlation is more pronounced looking at the regional distribution than when looking at the time trend within regions. 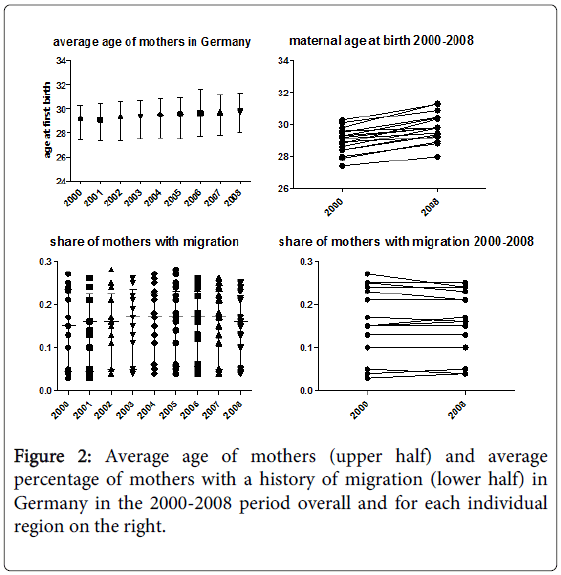 Figure 2: Average age of mothers (upper half) and average percentage of mothers with a history of migration (lower half) in Germany in the 2000-2008 period overall and for each individual region on the right. 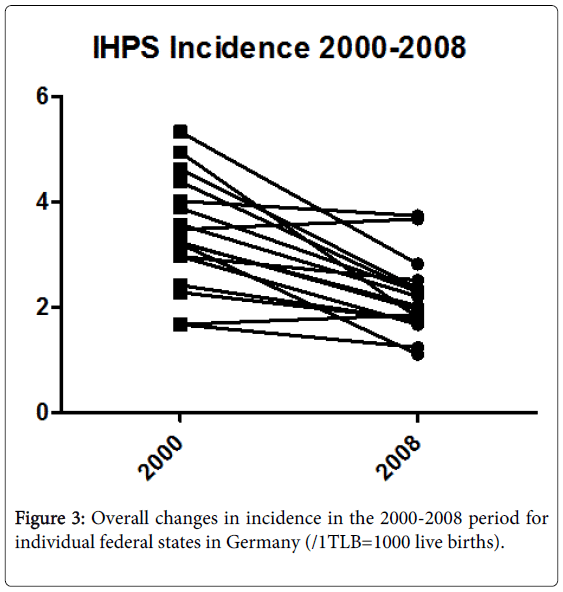 In our nationwide study, it was not possible to obtain information about birth rank on the individual level; therefore, maternal age was used alone.

A history of migration was used as a proxy for ethnicity in our study. Caucasian Europeans suffer from the highest incidence of IHPS when compared to other ethnicities. This finding remains true even when families migrate to a western environment, as shown by Schechter et al in a Californian population [12], and is a stable finding over many generations, as mentioned in many studies from the US comparing white-to-black (2:1) and white-to-Japanese (3-4:1) ratios of the condition in different regions [13].

Therefore, an increasing percentage of mothers with a history of migration and thus different ethnicities could naturally lead to a decrease in IHPS incidence in the population.

While ethnicity has been a factor in other studies and can explain variations in incidence of a disease which is at least partially influenced by genetic factors, unfortunately the mechanism of influence of maternal age and IHPS incidence remains unclear.

We found a 37% decline in IHPS incidence in Germany from 2000 (3.2086/1TLB [Range 1.67-5.33]) to 2008 (2.0175/1TLB [1.74-3.72]), which showed a significant negative relationship between IHPS incidence and the average age of mothers at first birth and the percentage of mothers with a history of migration. This relationship was present across time and regional distribution. In epidemiological data, these important correlations must be addressed and may potentially explain some of the regional differences that have been reported recently.

Copyright: © 2014 de Laffolie J, et al. This is an open-access article distributed under the terms of the Creative Commons Attribution License, which permits unrestricted use, distribution, and reproduction in any medium, provided the original author and source are credited.