Copyright: © 2017 Gupta R. This is an open-access article distributed under the terms of the Creative Commons Attribution License, which permits unrestricted use, distribution, and reproduction in any medium, provided the original author and source are credited

Nanotechnology is a leading scientific technique that offers sensing technologies and miniature devices to diagnose disease accurately and within time. There is wide range of applications of nanotechnology in the field of drug delivery and furthermore, to simplify the oral absorption of proteins and peptides nanocarriers are modified with specific ligands [1]. Nanoparticles are used to deliver RNA and proteins to diagnose the disease as well as to monitor the progression of disease. Pulmonary means of drug delivery is also an efficient route other than nanocarriers. Diabetes mellitus is characterized by increased thirst, excessive weight loss, excessive desire to eat and increased urge for urination thus resulting in abnormal increase in blood glucose level. Depending on the reason for high blood sugar, it can be classified as Type 1, Type 2 or gestational diabetes mellitus. In type 1 diabetes, body fails to produce insulin due to loss of β-cells which is caused by T-cell mediated autoimmune attack. In type 2 diabetes, body becomes insulin-resistant combined with insulin deficiency. Insulin replacement therapy is prescribed for type 1 diabetes patients which includes injections of long-acting insulin at mealtimes. Regulation of meals and exercise is preferred for the initial treatment of type 2 diabetes. Insulin injections and glucose test can be painful and time consuming for diabetic patients. To overcome the drawbacks of injection therapy, several technologies have been developed like continuous glucose monitors and insulin pumps to improve patient compliance [2-4]. Although they have improved blood glucose level till some extent but still they are unable to achieve true euglycaemia as insulin is injected subcutaneously by measuring glucose levels in the interstitial fluid which is time consuming mechanism. There can be risk of patient’s infection and scarring due to implanted sensors and cannulas and also there require frequent replacement and maintenance which can cost to patients. Therefore, there is urgent need to adopt those therapies which are safe and are cost-effective.

Over the last few years, several methods have been proposed for non-invasive monitoring of blood glucose and this can be made possible by nanotechnology. Various types of nanoparticles are currently studied for insulin delivery in diabetes treatment such as,

Polymeric nanoparticles are found to be effective and efficient over traditional oral and intravenous administration methods. These are biodegradable polymers surrounded by nanoporous membrane and are used as carriers of insulin. pH change swell the polymer system resulting in release of insulin. Copolymers like N, N-dimethylaminoethyl methacrylatem, polyanhydrides, polyurethanes, polyacrylic acids and polyacrylamide are being investigated for these applications [5,6].

To overcome the problem of invasive and painful subcutaneous injections, oral insulin administration is considered to be the most convenient method for the treatment of diabetes mellitus. Gastric enzymes are major barrier for insulin when administered orally as they degrade insulin in the stomach. Therefore, it should be enveloped in a matrix in order to get protected from the harsh environment in the stomach. This can be achieved by using combination of calcium phosphate-polyethylene glycol-insulin with casein. In animal study, for oral delivery of insulin polymeric nanoparticles loaded with insulin were used in the form of pellets. N-isopropylacrylamide, polyethylenimine, polymethacrylic acid, poly (isobutylcyanoacrylate), poly (-ε-caprolactone) is some of the polymeric nanoparticles that are being used for oral insulin administration. Microspheres act as both protease inhibitors and permeation enhancers to effectively carry insulin thus proving to be a promising strategy for oral insulin administration. For the treatment of type 2 diabetes, chitosan nanoparticles are considered to be most potential for inhalation delivery system. Insulin is a hydrophilic drug; therefore, it cannot diffuse through intestinal epithelium. Thus, chitosan has been used as the permeation enhancer for the absorption of insulin [2,5]. Encapsulation of insulin in the shell of carboxylated chitosan grafted poly(methylmethacrylated) nanoparticles has improved the efficiency of insulin delivery as reported by Cui et al. [6] (Figure 1). 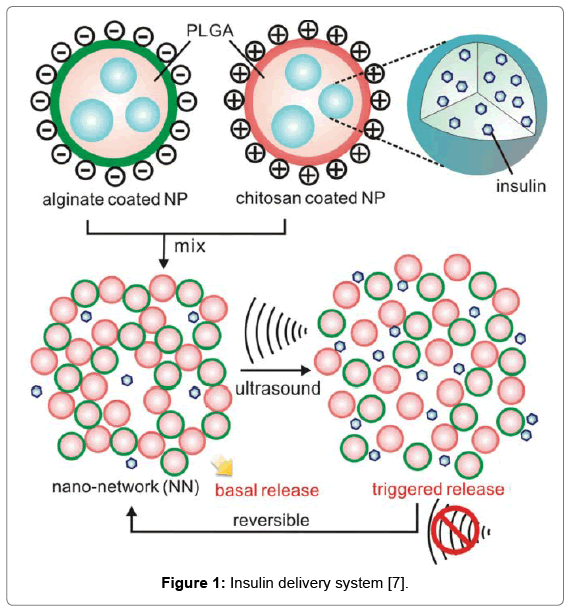 There are different inhaler systems used to deliver inhaled products such as dry powder formulations and solution. Compared to the gastrointestinal tract, it offers the advantages of mild environment such as low enzyme concentrations and neutral pH. The dry powder formulation of insulin can be inhaled into the lungs by encapsulating the insulin within the nanoparticles. This method prevents insulin degradation thus allowing direct delivery of insulin molecules to the bloodstream. It has some limitations such as patients require regular lung function tests thus being an expensive therapy [8].

In the presence of glucose, insulin molecules get oxidize leading to continuous electron transfer and thus microphysiometer (sensor) detects the insulin level. The current in the sensor is directly proportional to the insulin molecules produced by the cells and through this mechanism monitoring of insulin concentration can be done.

Development of artificial pancreas system that comprises of a continuous glucose monitor, glucose meter and an insulin infusion pump for calibrating the monitor could be the permanent solution for diabetic patients. Another approach is the usage of tiny silicon box which contains pancreatic beta cells taken from the animals. This approach have been used to protect transplanted cells from the immune system and allowing sufficient diffusion of glucose, insulin and oxygen and other necessary nutrients [9]. Current research has been going on to deliver insulin experimentally and this has been achieved by the developing “smart” insulin patch. “Smart” because it releases insulin according to the body’s need. It contains more than 100 microneedles packed with insulin and glucose-sensing enzymes (Figure 2). The impact of nanotechnology on medicine is increasing rapidly with each passing day. It is useful in detection of insulin and blood sugar which are also useful in treatment of diabetes. Oral insulin seems to allow several types of encapsulations by bypassing the gastric acidic environment and thus dealing with the problem of daily subcutaneous injections. Nanotechnology has proven beneficial in treating diabetes mellitus by not only improving the catalytic properties of electrodes but also by increasing the available surface area of the sensor-receptor complex. This can revolutionize insulin delivery through enhanced oral formulations and islet encapsulation. Polyethylcyanoacrylate nanospheres have proven to be successful for insulin delivery in streptozotocin-induced (STZ) diabetic rat model. Hopefully, next generation nanoparticle mediated insulin will improve everyday lives of diabetic patients in the foreseeable future.