Copyright: © 2015 Cherif E, et al. This is an open-access article distributed under the terms of the Creative Commons Attribution License, which permits unrestricted use, distribution, and reproduction in any medium, provided the original author and source are credited.

Heavy metal pollution is a growing environmental problem in marine coastal waters; for this reason the monitoring of water pollution needs the availability of test-species able to furnish reliable and cheap results. From this point of view, copepods are important test organisms owing to their wide distribution and for their key-position within the food web. As Centropages ponticus seems to be a promising target-species in ecotoxicology. The present study assesses the toxic effects of cadmium (Cd) on survival and reproductive performance of C. ponticus. A microcosm experiment was carried out for this study. Copepods were exposed to cadmium that ranged in concentration from 0.1 to 200 µg Cd.L-1 and effects were examined after 24 hours. The results show that treatments with cadmium significantly affect survival in copepods at concentration equal or above 0.2 μg.L−1. In order to assess sublethal effects of cadmium on reproduction; the test organisms were exposed to four nominal Cd concentrations 0, 0.2, 0.4, 1 µg.L-1. The results indicated that egg production decreased with the increase of metal concentration. An increase of the Cd concentration reduced the number of hatched nauplii. Thus, survival and reproduction in C. ponticus as a model test species could be effective physiological markers to monitor marine metal pollution.

Coastal and marine ecosystems are usually contaminated with high concentrations of anthropogenically introduced heavy metals [1]. In these environments, heavy metals can cause risks to organism’s survival and general biodiversity because of their toxicity, persistence and bioaccumulation characteristics [2-4] Metals are dangerous because they tend to bioaccumulate. The extent of bioaccumulation of metals is dependent on the total amount, the bioavailability of each metal in the environmental medium and the route of uptake [5]. Most of the evidence derived from laboratory studies indicates that uptake of heavy metals from water is the predominant route of exposure [6]. However, several recent studies have suggested that dietary accumulation may contribute significantly to total body burdens of heavy metals in organisms [7]. Cadmium (Cd) is a biotoxic element and one of the major metals that are ubiquitously distributed in aquatic systems [8]. It’s also a widely used heavy metal in the industry [9,10] in recent years; serious Cd pollution in aquatic systems has become a serious problem [7]. Anthropogenic input is considered to be the main source of Cd contamination in aquatic environments[11] and is known to be toxic to zooplankton [12,13]. This metal can be accumulated by the organisms, so affecting their survival, growth, reproduction and antipredator behavioural [2,14]. Pelagic copepods are the dominant secondary producers of pelagic ecosystems, and play a considerable role in the transfer of energy and organic matter from primary producers to higher trophic levels [15]. The reproduction of pelagic copepods constitutes an important role in the control of fish and shellfish recruitment since eggs and nauplii constitute the main prey of many species of fish and fish larvae fish [16]. Copepods are emergent organisms in ecotoxicology; to date their employment is increasing [17]. For their ubiquitus distribution, small size and for their keyposition in the food web, scientists have been suggesting them as testspecies in ecotoxicology and the obtained results seem to be promising. Few studies exist on the copepod C. ponticus, particularly in the areas of its ecology, geophylogeny, and its behavioural [18-21]. It has a wide geographical distribution along the coast of the Mediterranean [22]. C. ponticus has several advantages as a model test species. Hence, its distinct developmental stages, dimorphic sexes, high fecundity, short life-cycle, and easy to culture permit detailed ecotoxicological studies on the effects of toxicants.

This study was conducted in response to the need for costal and marine species to be used in routine ecotoxicology and toxicological risk assessment. In order to develop the copepod Centropages ponticus as a model species, information on its sensitivity to pollutants is, therefore, highly desirable. Moreover, laboratory studies addressing acute and sublethal effects ofheavy metalson physiological response of copepods are considered important to understand how copepod populations cope with metal pollution and to conclude a holistic risk assessment of metal pollution. Thus, to assess the toxicity of cadmium, we exposed copepods to a range of concentrations in 24-hour static mortality tests. From these results we focused to assess the effect of sublethal exposure on egg production and egg hatching success.

The copepod C. ponticus was collected during low tides from the Bizerte lagoon (37º14’ N, and 9º 56’E) north east of Tunisia (Figure 1) by using plankton net with 200μm mesh (0.57 m mouth diameter). The Bizerte lagoon ecosystem was studied previously to determine the environmental variables controlling the planktonic copepods abundance, diversity and species composition [15,22,23]. The collected samples were immediately transported to the laboratory ofBiodiversity and Functioning of Aquatics Systems (Faculty of Sciences of Bizerte, Tunisia). Copepods identification was based on morphological criteria following consultation of taxonomic keys and species descriptions [24] under a Leica binocular microscope. Animals were then acclimatised to laboratory and test conditions in the temperature controlled room at 18 ± 1ºC for 24-48 h in 500 mL beakers containing seawater with continuous aeration and no additional food. Seawater used for acclimating copepods was collected 20 m offshore from Bizerte Baie, well away from any obvious contaminant inputs and was filtered throw 0.45 μm GF/F glass fiber filter (Whatman). After the acclimation period, only healthy and active ovigerous females that showed normal swimming ability were retained and used as test animals in the bioassay.

Figure 1: Map of the Bizerte Lagoon, North East of Tunisia (37°14’ N, and 9°56’ E), showing the sampling site from where copepods (Centropages ponticus) were collected.

In the bioassays, standard water quality parameters were as follows: salinity 32, dissolved oxygen 3.8 ± 0.2 mg L-1, pH 8.2 ± 0.3 and temperature 18 ± 1ºC. Toxicity tests were carried out according to the protocol Mohammed EH et al. [25], with modifications. Bioassays were performed with adult, ovigerous females of C. ponticus. Exactly 40 mL of filtered seawater (0.45 μm) was added to each glass beakers (5 cm height × 3.5 cm diameter).

Thirty ovigerous females were carefully placed in each of the glass beakers. Cadmium working solutions were then added to yield concentrations ranging from 0.1 to 200 μg Cd.L-1. Experimental concentrations were chosen on the basis of preliminary trials and on data from the literature [13,25-27]. Both control and treatments had three replicates each. The bioassays lasted for 24 hours, because of the shorter time; copepods were not fed during the test period. Dead test organisms were counted and removed at each laps of times. Mortalitywas typically defined as a position on which the animal’s urosome is perpendicular to its prosome [28]. In addition, no moving organisms were observed at the bottom of the recipients under a stereoscopic microscope after careful inspection. Copepods with no movement of appendices after an observation period of 30 seconds were also assumed to be dead.

Experimental conditions were the same as acute toxicity tests. Cd concentrations used in the sublethal toxicity test were 0, 0.2, 0.4, 1 μg.L-1 Cd (as nominal concentrations). Reproductive tests were conducted using a modified protocol described by [22], For each test concentration, 10 females of C. ponticus, bearing an egg sac, were individually transferred to a new three glass beakers per treatment equipped with 200 mm mesh false bottoms. Beakers were filled with 40 mL of 0.45 mm filtered seawater. These females were incubated for 3 days under a 13:11 h light-dark cycle (spring daily cycle). The spawned eggs (SE) were counted after 24, 48 and 72 h under Leica binocular microscope and all of them were gently transferred by micropipette into news glass beakers. The eggs were subsequently incubated for 48 h, after which the numbers of nauplii and unhatched eggs were recorded. The test conditions for egg hatching were the same as fecundity tests, three replicate experiments at each test concentration, including controls. Hatchling success (HS%) for the eggs produced was calculated as the number of nauplii present after 48 h / the number of eggs added at the start of the incubation x 100.

Statistical analyses were conducted using the SPSS version 12.0 statistical software. Differences in egg production rates, hatchling success, and survival among treatments were tested for significance by means of one factor analysis of variance (ANOVA). When differences among groups were significant the Dunnet’s test was employed to compare the control group and each of the experimental groups.

Table 1: Mortality (%) of copepods during exposure to a range concentration of cadmium after 12 and 24 hours of exposure: mean value, standard error and p value. 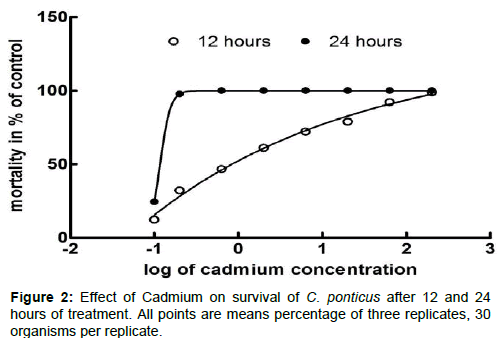 Figure 2: Effect of Cadmium on survival of C. ponticus after 12 and 24 hours of treatment. All points are means percentage of three replicates, 30 organisms per replicate. 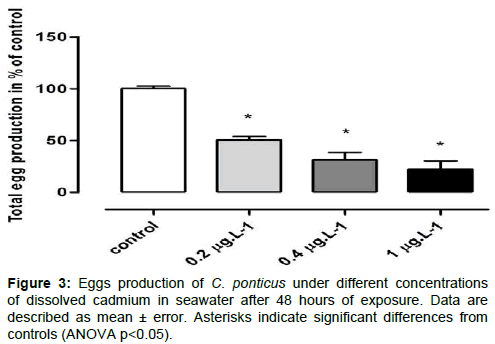 The present study demonstrates that cadmium exposure can have significant and detrimental effects on survival and fecundity of the planktonic copepod Centropages ponticus. The mortality increased significantly as cadmium concentration increased (p<0.05), with a mortality >90% at concentrations equal or above 0.2 μg.L−1 after 24 hours. This is in agreement with others results obtained with the intertidal copepod Tigriopus japonicas. Our results showed that acute exposure to low and sublethal concentrations of cadmium produce a significant reduction in the reproduction rate and egg hatching success (Figures 3 and 4), which support previous studies on the effect of cadmium exposure on fecundity of some planktonic copepods [12]. The measurement of egg production rates and hutching success of adult female copepods has been proposed as an alternative method for estimating pelagic secondary production, since it constitutes a measure of potential population recruitment rate [22,29]. Moreover, egg production is an important aspect of the adult biology of copepods, which integrates a number of metabolic processes and therefore has high ecological relevance [15]. Thus, egg production and hatchling success of copepods has been previously shown to be a very sensitive biological response to several toxicants like heavy metals, crude oil [30-33], pesticides, PAHs and testosterone. In this study, the acute toxicity of cadmium to adult female of C. ponticus was ascertained and the effect was time and dose dependent as ordinary xenobiotiques. Cadmium adversely affects on adult female survivability and fecundity at above 0.2 μg.L−1. This study is the first to examine the effects of cadmium on the planktonic copepods C ponticus to evaluate its potential to serve as an appropriate test species. Thus, survival and reproduction could be effective physiological markers to monitor marine metal pollution.

This study was supported by the bilateral cooperation program between Tunisia and France (Jeunes Equipes AIRD; JEAI - ECOBIZ). Anonymous reviewers are acknowledged for their constructive remarks that resulted in significant improvement of this paper.