Effects of Ultrasound and Sonic Toothbrushes on Oral Hygiene Status

Copyright: © 2016 Takenouchi A, et al. This is an open-access article distributed under the terms of the Creative Commons Attribution License, which permits unrestricted use, distribution, and reproduction in any medium, provided the original author and source are credited.

Objective: To evaluate the effects of ultrasound and sonic toothbrushes on the oral hygiene status of healthy people.

Methods: This study was administered with a randomized, controlled, and double-blind trial. Twenty-nine firstyear dental hygiene students answered a questionnaire on oral hygiene behavior, and they were divided into one of four groups after pre-examination. Each group used an electronic toothbrush with different modes (2 times/day, 3 min) after tooth brushing instruction (TBI) for four weeks; A (control): used with power off; B: used with the sonic mode (sonic wave: 16,000 strokes/min); C: used with the ultrasound mode (ultrasound frequency: 1.6 MHz); D: used with the ultrasound + sonic mode. The plaque index (PlI) and gingival index (GI) were assessed. The unstimulated saliva flow rate was measured (spitting method, 1 min). The Ethical Committee of the Japan Dental Hygienists’ Association approved this study’s protocol (vote number: 2). A Wilcoxon signed-rank test was used.

Conclusion: The use of electronic toothbrushes with ultrasound for four weeks effectively decreased the PlI and increased the unstimulated saliva flow rate. Professional prophylaxis was required to improve gingival status. TBI enabled participants to use electronic toothbrushes more effectively to stimulate the salivary gland and to increase the unstimulated saliva flow rate.

Also, this research did not evaluate the change in saliva flow rate, which has a substantial impact on oral hygiene [6]. One of our hypotheses was that the vibration of electronic toothbrushes was effective in stimulating the saliva gland: if so, electronic toothbrushes, which have vibration regardless of their lack of visibility, act as a kind of saliva gland massage, thereby effectively increasing the saliva flow rate [7]. At the first visit, participants received TBI. This study involved four operators, and they did TBI following the manual that the manufacturer had created. Therefore, we can say that all of the four operators conducted common TBI for every participant. These are the five points in the TBI: (i) every participant used an electronic toothbrush with fluoride dentifrice, (ii) the scrubbing tooth brushing technique was taught, (iii) the mouth was closed during tooth brushing to heighten the effects of ultrasound, (iv) enough buccal mucosa was removed for the toothbrush to reach the cervical areas on molar teeth, (v) participants brushed their teeth using an examined toothbrush two times a day for three minutes.

All examined modes in toothbrushes except manual mode had a vibration alarm system every 45 seconds. Therefore, participants brushed each jaw quadrant for 45 seconds following the alarm. Participants who used an examined toothbrush with power off were given a timer to measure three minutes by themselves.

This study was administered with a randomized, controlled, and double-blind trial. Participants were numbered, and all of the results of this study were treated numerically (Figure 2). 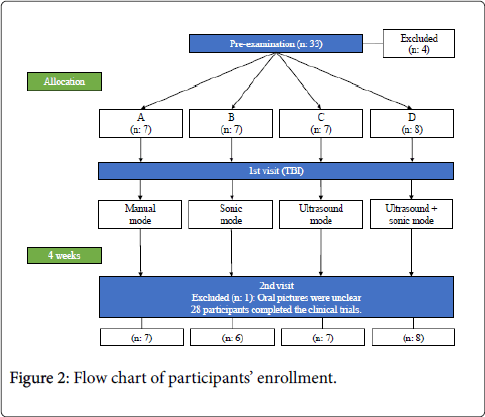 Second, participants received TBI, they were given an examined electronic toothbrush, and they used it with the allocated mode two times a day for three minutes over four weeks. After that, they received an examination.

Participants answered if they had received TBI before this research at pre-examination. Oral pictures were taken, and a masked examiner assessed the Quigley-Hein plaque index (PlI) and Silness and LÓ§e gingival index (GI) viewing the oral pictures and the results of bleeding on probing. The unstimulated saliva flow rate was measured using a spitting method for 1 minute.

A Wilcoxon signed-rank test was used for statistical analysis to compare the intragroup differences between baseline and after four weeks in all measurements by group. Group A and B and group C and D were combined into the “Group without ultrasound” and the “Group with ultrasound,” respectively. After that, the changes in all measurements were compared by ultrasound. The Krusal Wallis test was also used to evaluate intergroup differences after four weeks. JMP version 11 for Windows (Statistical Discovery, From SAS) was used for statistical analysis, and p-values <0.05 were considered to be statistically significant.

Table 1: Averages in the PlI and GI at baseline and after 4 weeks by group.

No significant differences were found in all groups on the GI (Table 1).

First, ultrasound was effective in decreasing the PlI and in increasing the saliva flow rate for four weeks, which was in accordance with modern research that showed that toothbrushes with only ultrasound disrupted Streptococcus mutans chains [9]. Also, the effects of ultrasonically activated water streams on removing plaque were identified in other modern research [10]; that is, imperceptible vibration of ultrasound was effective to remove biofilms on the teeth including noncontact surfaces, to stimulate the saliva gland, and to improve oral hygiene status. Using technology to improve oral hygiene status should be promoted because electronic toothbrushes showed higher benefits than a certain standard for all participants regardless of their tooth brushing technique. More RCT related to ultrasound toothbrushes are required to heighten their credibility and to get more people to use them. In this process, dental professionals could keep learning about ultrasound or ultrasonic, which is used widely in dental treatment—not only in professional prophylaxis but also in root canal treatments [11-13]. Actually, dental hygiene education programs will be changed to reflect a contemporary approach to ultrasonic instrumentation [14].

Second, professional prophylaxis is essential to improve gingival status, though it was not implemented in this research. Hence, this study showed the pure effects of the use of electronic toothbrushes and identified that only self-care was insufficient to improve gingival status because no toothbrushes could remove biofilms in periodontal pockets. Thus, these biofilms should be removed by professional prophylaxis including ultrasonic scaling or debridement utilizing cavitation [15–17] because previous research showed that the quality of self-performed mechanical plaque removal was not sufficiently effective in adults with gingivitis [18]. If professional prophylaxis had been included in this research, gingival status would likely have improved, as previous research has shown [19].

Third, TBI enabled participants to use electronic toothbrushes more effectively to stimulate the saliva gland. Whether or not users could remove enough buccal mucosa for toothbrushes to reach cervical areas was very important. The point was whether or not the saliva gland was exposed to ultrasound. Actually, previous research showed that the learning effect had a higher impact on improvement in oral hygiene [20]. Furthermore, some users may misunderstand how to use ultrasound toothbrushes, for instance, they might just put the head of the toothbrush on the tooth surfaces but not move it, which is completely different from how to use sonic toothbrushes. Users should receive TBI before using any kind of electronic toothbrushes.

The population of this study was healthy youngsters; moreover, they were dental hygiene students. This was one of the limitations in this research. Hence, the results of this study cannot be generalized; however, this study showed the highly possibility that the imperceptible vibration of ultrasound was effective in improving the PlI as well as in stimulating the saliva gland to increase the unstimulated saliva flow rate. Whether or not the same results will be obtained for older people will be identified in our future research.

Electronic toothbrushes with ultrasound were effective to improve oral hygiene of dental hygiene students; however, patients should visit dental clinics and receive TBI before using it to heighten the effects of ultrasound. In doing so, patients will receive professional prophylaxis and improve their gingival status, as well.

The authors thank the dental hygiene students who participated in this study and the Taiyo School of Dental Hygiene students and educators who assisted in this research. Michael Bayne’s (Kurdyla and Association Co.) editing of the manuscript is really appreciated by the authors. This study was conducted with the help of the Ito Co. Examined electronic toothbrushes were supplied by the Ito Co.