Copyright: © 2015 Ibrahim T. This is an open-access article distributed under the terms of the Creative Commons Attribution License, which permits unrestricted use, distribution, and reproduction in any medium, provided the original author and source are credited.

Introduction: Alopecia although reversible, is one of the most distressing side effects of chemotherapy. Preventive measures mainly focus on scalp cooling with variable and unpredictable efficacy reported in the literature. The objective of this work is to test the tolerance and effectiveness of a new silicon based cooling technique in preventing chemotherapy induced alopecia (CIA) after each of six cycles of chemotherapy. Method: This is a one center prospective descriptive study. Included patients were females receiving Taxanes and/or Adriamycin based regimens at the oncology department of Hotel-Dieu de France University Hospital. Cooling was done using the Orbis-Paxman scalp cooling system. Hair loss severity was evaluated using the World Health Organization (WHO) grading system. Failure or success of cooling was defined on the basis of wig or head cover use. Independent factors like age, type of hair, type and dose of chemotherapy, total and post infusion cooling time hemoglobin and creatinine at each course. Results: 81 patients were included. Success ranged between 84.8% and 96% for the repeated cycles. No association was found with the independent factors, except for the dose of chemotherapy in the first course with higher doses of Adriamycin (99 mg v/s 77 mg, p value 0.037) as well as taxanes (140 mg v/s 122 mg, p value 0.035) in patients experiencing failure. Conclusion: Scalp cooling has proved to be a successful and well tolerated prevention method for CIA in breast cancer patients treated by Taxanes and Adriamycin.

Alopecia is one of the most distressing side effects of chemotherapy. Although reversible, it may affect body image in cancer patients and have great influence on treatment acceptance [1-3]. In fact chemotherapy, by acting on rapidly growing cells, affects mainly hair follicles on the scalp which are in majority in the growth phase [4,5]. Patients may also lose their eyebrows and eyelashes [6]. Hair shredding usually occurs one to two weeks after infusion and its’severity depends both on the type and dose of chemotherapy like Taxanes and doxorubicin, two crucial drugs in the treatment of woman with breast cancer [6-12].

Currently, preventive measures mainly focus on scalp cooling [13]. This later was first introduced in the 1970s, and has been used since to reduce and prevent chemotherapy induced alopecia (CIA) [14]. Its’ efficacy in the literature, however, is highly variable and unpredictable which could be due to variations in cooling techniques, hair loss evaluation methods and chemotherapeutic regimens [6,8]. Several other factors have been proposed to influence success of this procedure like cooling type and time, scalp temperature and hepatic function [6,15].

The objective of this work is to test the tolerance and effectiveness of a new silicon based cooling technique in preventing CIA after each of six cycles of Taxanes and/or doxorubicin based chemotherapy.

This is a one center prospective descriptive study. All included patients were females receiving Taxanes and/or Adriamycin based regimens from June- 2013 till June-2014 at the oncology department of Hotel-Dieu de France University Hospital. We excluded patients having cold induced urticaria, cold agglutinin disease, cryoglobulinemia, and post-traumatic cold dystrophy. Cooling was done using the Orbis- Paxman scalp cooling system as written on machine protocol. Hair loss severity was evaluated by trained medical staff three weeks after each course and reported in grades using the World Health Organization (WHO) grading system for alopecia: grade 0 for no hair loss, grade 1 for mild hair loss, grade 2 for pronounced hair loss, and grade 3 for total hair loss [1,16]. Failure or success of cooling was defined on the basis of whether the patient used a wig or head cover. Tolerance at each course was described, and side effects of cooling were graded as following: grade 1-2 for mild or moderate without a need for intervention (stopping or reducing cooling duration); grade 3-4 for severe or very severe with a need for intervention. Independent variables studied were age, type of hair as defined by Van den Hurk et al. (thin Caucasian type v/s thick African type) [3], type of chemotherapy (Taxanes based v/s Adriamycin based v/s Taxanes and Adriamycin based), dose of chemotherapy (in mg), post infusion cooling time (minutes), total duration of cooling (minutes), hemoglobin (g/dl) and creatinine (mmol/l) at each cure.

In total, 81 patients were included in this study. The mean and median age were respectively 50 and 49 years old (standard deviation of 12), with a maximum of 78 years old and a minimum of 19 years old. Breast cancer patients constituted the largest group (75 patients-92.6%) followed by ovarian cancer (4 patients-4.9%) and the last 2 (2.5%) patients had Hodgkin’s lymphoma. As for hair type, subjects were nearly equally divided with 28 (46.7%) having thick hair and 32 (53.3%) had thin hair. Cooling was well tolerated in the majority of patients all along the 6 courses (Table 1) with a small number of patients experiencing adverse events severely enough to affect the cooling procedure (Table 2). Most of patients had no or minimal hair loss (Table 3 and Figure 1) during the repeated cycles, and success rate (defined as no need for a wig or head cover) ranged between 84.8% for the first cycle to more than 90% for the subsequent cycles (Figure 2). We analyzed the association between success rate and independent variables (defined above) for each course. We did not found any association except for the dose of chemotherapy in the first cycle (data only shown for the first cycle in Table 3). In fact patients experiencing failure of cooling had significantly higher doses of Adriamycin (99 mg v/s 77 mg, p value 0.037) as well as Taxanes (140 mg v/s 122 mg, p value 0.035).

Table 2: Type and grade of adverse events due to cooling during each cycle.

Table 3: Summarizes the association between success rate and independent variables: age, hemoglobin/creatinine concentration, type of hair, chemotherapeutic protocol and doses and time of cooling during the first cycle. 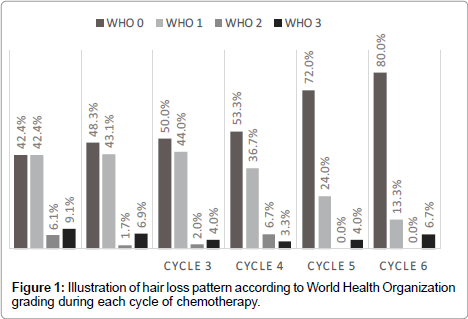 Figure 1: Illustration of hair loss pattern according to World Health Organization grading during each cycle of chemotherapy. 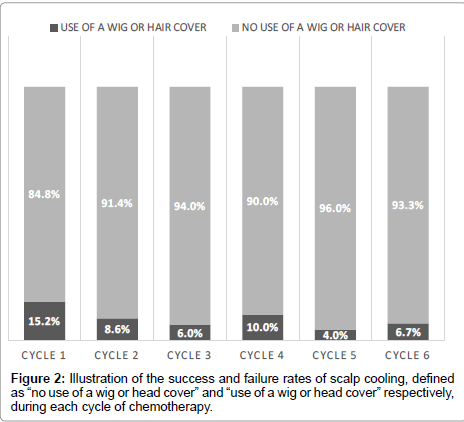 Scalp cooling is based on two principles; first it reduces blood flow to the hair follicles during peak plasma concentrations of the chemotherapeutic agents and second minimizes biochemical activity of cells which makes them less sensitive to chemotherapy [15]. Practically, however, this technique is not frequently offered for cancer patients to prevent of CIA. For example, in February 2008, less than 40% of all Dutch hospitals offered scalp cooling [1]. One of the reasons is the underestimation of the impact of hair loss for patients and their relatives by medical professionals [6]. In fact, CIA could be a reason to refuse chemotherapy or to choose less effective regimens in up to 8% [7,17]. Another reason could be the overestimation of scalp cooling burden on a patient and the lack of knowledge on its’ current effectiveness [6].

In the majority of the published studies tolerance rates were high and side effects were minimal [8,18-22], as in our study where we found that more than 90% of patients tolerated scalp cooling very well (Table 1). Adverse effects were the same signaled in the literature, like headache, cold sensation, nausea and vomiting [15] with less than 5% being grade 3 or 4 as defined in the methodology section above.

Concerning the success of cooling, a recent meta-analysis of 1,098 participants including eight randomized controlled trials and nine controlled clinical trials, has shown that scalp cooling is the most successful method that significantly reduce the risk of CIA (RR = 0.38, 95% CI = 0.32-0.45) [13]. In our study we found a success rate of more than 80% remaining constant all along the subsequent cycles. It is one of the highest in the literature where success rate ranged from 50 and 80 percent [15,23]. This relatively large difference in success rates is mainly due to different type of cooling used in the different studies as well as chemotherapy regimens and variation in defining failure and hair loss severity [1,8].

A review made by Komen et al. [1] defined several factors that could affect success, beginning by the types of chemotherapy, doses of chemotherapy, time of perfusion, time of cooling, type of hair, hemoglobin concentration and the alteration in liver function. This later was not included in our study, but for the other factors we only found an association between success and chemotherapeutic doses. We also found a trend towards less success rate when Taxanes have been used compared to Adriamycin based chemotherapy which was not found to be statistically significant regarding the small sample size. In addition some authors consider scalp temperature to be the most important factor, with the optimal scalp temperature still debated [15].

The high success rate in this study, however, confirms the findings of Komen et al. [6] which focus on the importance of the cooler type, with devices equipped with a thermostat providing constant cooling for longer duration especially when silicon based medium is used.

One of the debated late side effect of cooling is scalp metastasis. Theoretically, tumor cells that have seeded in the scalp might not receive adequate treatment during hypothermia. But this condition have rarely been reported in the literature. A first study published in 1983, 2 subjects out of 7800 breast cancer patient had recurrence in the scalp following cooling [24] whereas a review done by Grevelman et al. on 56 studies found 9 recurrences out of 2500 which were especially hematological neoplasia [8]. On another hand findings of Lemenager et al. (15 years’ experience) [9] and Ridderheim et al. seem to be reassuring (median follow up 9 & 15 months respectively) [21]. Actually it is advised not to use that scalp hypothermia in neoplastic diseases known to metastasize to the scalp like leukemias [15].

Limits of the study

This study is mainly limited by the small sample size. Also a more objective evaluation method of hair loss should be used, like pre and post cooling scalp picture evaluation by a third party.