Copyright: © 2017 Paola M, et al. This is an open-a ccess article distributed under the terms of the Creative Commons Attribution License, which permits unrestricted use, distribution, and reproduction in any medium, provided the original author and source are credited.

Major concerns exist over the several invasive and antibiotic resistant organisms thriving in swine waste waters and that are known to threaten human and animal health. Among them, Salmonella enterica serovar typhimurium deserves special attention since it is the most prevalent antimicrobial resistant serovar in swines, and also frequently related to human infections and outbreaks [1].

Several physicochemical approaches are described to control the proliferation of pathogens, such as exposure to UV irradiation [2,3] use of strong oxidant radicals [2], pH increase [4], and selective membranes [5]. However, most if not all of these approaches are not economically feasible. Therefore, biological anaerobic digestion followed by stabilization ponds are the most common treatment option adopted in swine farming worldwide [3,6,7]. Pathogen elimination can occur under thermophilic conditions, but not under mesophilic conditions that prevail in most digesters [8].

Phycoremediation has been considered as and efficient tertiary treatment method to reduce organic compounds and nutrients from waste waters [9-12]. Some microalgae produce a wide variety of antibacterial substances that can inhibit or kill pathogens [13,14]. These waterborne pathogens may also be sensitive to high oxygen concentrations and increased pH produced by photosynthesis. Nevertheless, to the best of author’s knowledge, the mechanism in which phycoremediation reduce or even eliminate invase antibiotic multiresistant bacteria from swine waste waters has not been fully explored. This study demonstrates whether phycoremediation of swine waste waters could effectively control the proliferation of antibiotic-resistant Salmonella enterica serovar typhimurium. Ancillary objective include the evaluation of a pre-enrichment method for rapid quantification of S. typhimurium from complex environmental samples.

Microalgae was collected from a field scale facultative open pond used as tertiary treatment process downstream from a biodigestor at the Brazilian Agricultural Research Corporation (EMBRAPA) swine waste water facility (Concórdia, SC, Brazil). Scenedesmus spp. was the dominant microalgae in the PBRs as described elsewhere [9,10]. The strain was isolated and deposited in the collection of photosynthetic microorganisms for Agroenergy Research at Embrapa (Brasília, DF, Brazil) under access number Embrapa LBA#31 (IAN193.096).

Salmonella enterica serovar typhimurium was collected from a local river stream (Concórdia, SC, Brazil), characterized as a multi-resistant bacteria [1] and stored at the Embrapa’s microorganism bank collection under accession # 12301.

Samples were analyzed twice a day for pH, temperature (pH– mV, Hanna Instruments, Inc.), dissolved oxygen (DO) (Lutron DO- 5519). Microalgae were quantified by optical density at 570 nm (Hach DR/2000). A satisfactory correlation (r2=0.97) between DW (gravimetric measuremets) and OD570 (mg-DW L-1=536.2 × OD570nm-36.89) was obtained. The specific growth rate μ (day-1) was calculated by fitting the microalgae dry weight obtained from samples within the first 24 hours of microalgae growth to an exponential function of (lnX-lnX0/t), where t was the time between the two measurements, and X and X0 (mg-DW L-1) were concentrations of biomass at t (24 hours) and t0, respectively. pH adjustments in all photobioreactors were performed with either 0.1 M HCl or 0.1 M NaOH.

S. typhimurium inoculum was collected from an overnight culture plate, sub-cultured into nutrient broth (50 ml) and incubated in a shaker (100 rpm, 37°C, 24 h). Density of cell suspension was assessed with McFarland turbidity standard No. 05 (1-2 × 108 CFU mL-1). Samples from PBRs were diluted (100-10-5) in saline media (0.85%) and spread onto Chromogenic XTL4 agar plates (100 μL) to enumerate S. typhimurium colonies. Plates (duplicates from PBRs) were incubated overnight and results were reported as CFU mL-1.

Scenedesmus spp. are known for their environmental ubiquity and predominance in waste stabilization ponds and high-rate algal ponds [17]. In the present study, microalgae growth rates of 96.5 ± 1.7 and 82.3 ± 3.4 mg-DW L-1 d-1 were reached in PBRs with and without pH adjustments, respectively. Specific growth rates (μ) were also calculated during the exponential growth phase of Scenedesmus spp. The mean value of μ in the interval from 0 to 24 h for PBRs with and without pH adjustments were 0.97 and 0.92 day-1, respectively. These values were within the higher growth rates reported for Scenedesmus sp. in swine waste waters [10,17]. The biomass increase measured in both PBRs treatments were very similar (p<0.05), with maximum microalgal concentration of 265 ± 3.9 mg-DW L-1 observed at 72 h (Figure 1). These experimental results are within typical values of maximal biomass production (0.2-1.0 g-DW L-1) reported for Scenedesmus spp. in domestic and swine waste waters from mixotrophic growth [17]. Interestingly, Scenedesmus spp. is a promising microalgal species that can thrive in waste waters with great performance on biomass production and lipid accumulation than other high-lipid-content microalgae [18]. Although not the scope of the present investigation, the obtained Scenedesmus spp. growth performance and biomass production are comparable to other studies focused on microalgal biomass to bioenergy conversion [19,20]. Thus, for a swine waste water treatment plant that uses tertiary phycoremediation treatment to remove pathogens and nutrients, microalgae biomass production could also aid in valuable biofuel products. 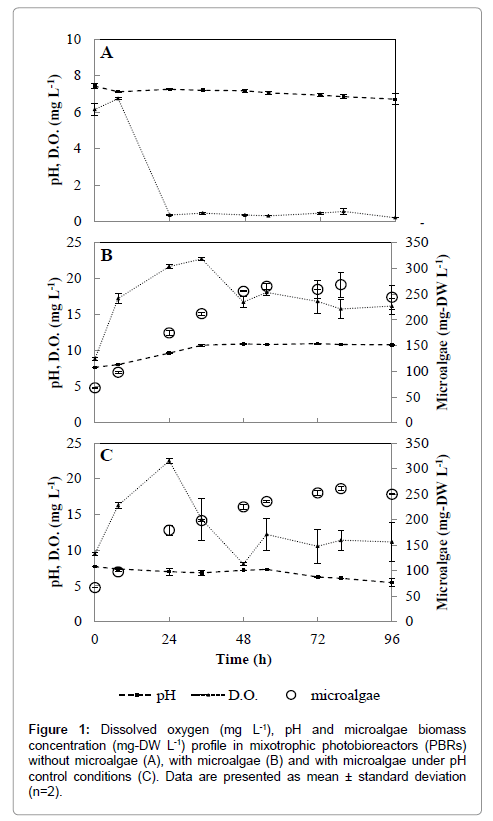 Salmonella spp. are able to thrive in different environments, survive several weeks in dry environments and several months in water, thus proliferation of S. typhimurium in swine waste water digestate was somewhat expected and later confirmed in the biological reactors without microalgae (Figure 2). In these reactors, S. typhimurium increased from 7.8 ± 1.9 × 102 CFU mL-1 (t=0 h) to a maximum of 3.4 ± 0.8 × 104 CFU mL-1 (t=72 h). 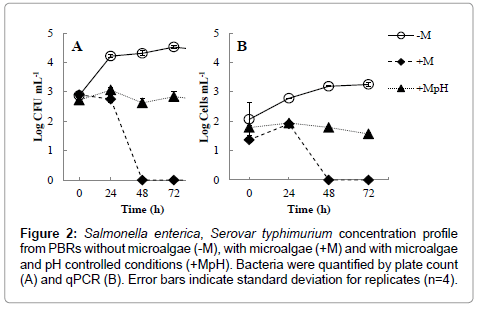 Removal of pathogens from phycoremediation in ponds are usually attributed to a combination of long retention times, UV irradiation, high temperature, increased dissolved oxygen (DO) concentrations and high pH [21]. Among these factors, elevated DO and pH levels, resultant from optimal microalgal photosynthetic activities, have greater effects on pathogen inhibition and inactivation [22]. While it is possible to artificially increase DO and pH by aeration and chemicals addition, respectively, these practices are usually economically unfeasible and can be challenging to dosage at field scale. In this regard, phycoremediation could be alternatively considered as a disinfection step in waste water facility. S. typhimurium was completely removed from PBRs within 48 hours (Figure 2). In pH adjusted PBRs, S. typhimurium concentrations did not vary (p=0.12) throughout the entire experiment time frame and remained constant at 7.5 ± 1.4 × 102 CFU mL-1. Negligible difference in DO (p>0.05) concentrations were observed between PBRs treatments (Figure 1), thus discharging the probability of bacteria elimination by DO. The measured DO concentrations were above solubility levels (i.e., 8.3 mg L-1 at 1 atm and 25°C) (Figure 1). Oxygen saturation is normally found in ponds or photobioreactors due to high microalgae growth rate and associated photosynthetic activities [10,17,21]. The high pH values measured in the PBRs without pH adjustment seemed to play a major role on the inactivation of S. typhimurium during Scenedesmus spp. growth.

The antibacterial properties of microalgae exsudates should not be ruled out [14]. Scenedesmus sp. has been previously shown to act against Gram-positive (e.g., Staphylococcus aureus) and Gram-negative (e.g., Escherichia coli and Pseudomonas aeruginosa), but it was not very effective against Salmonella sp. [14,23]. This fact associated with the lack of S. typhimurium removal from the pH controlled PBRs suggests that microalgae metabolites had insignificant contribution on bacteria removal.

Colony count techniques consider CFU numbers, which can consist of more than one cell count and thus lead to data overestimation [24]. Therefore, to increase accuracy in bacterial concentration, qPCR quantification method was also performed in parallel. The plating method showed significantly higher cell concentrations (between 0.8 to 1.5 log differences) than qPCR (Figure 2). However, no differences (p>0.05) in S. typhimurium growth ratio (X/X0) over time was verified between these two bacterial quantification methods.

Phycoremediation of swine waste water digestate was very effective to produce valuable microalgae biomass and eliminate antibiotic multi-resistant S. typhimurium within 48 h. Pathogen removal was linked to the inhibitory effects of high pH (as high as ≅ 11) as a result of photosynthesis. Quantification of invasive S. typhimurium in environmental complex samples was demonstrated by preenrichment followed by qPCR. Phycoremediation of swine waste waters can be a promising treatment strategy to control the spread of antibiotic resistant bacteria in the environment. This can be particularly appealing when cogitating water reuse in animal farming and the risks associated with public health outbreaks from such practices.

The authors thank Remídio Vizzotto and Luiza Letícia Biesus from Embrapa Swine and Poultry for technical support. Authors thank financial support from Coordination for the Improvement of Higher Level or Education Personnel CAPESEMBRAPA (#001/2011) and the Brazilian Agricultural Research Corporation – EMBRAPA (#02.12.08.004.00.05).