Copyright: © 2016 Parhar NS, et al. This is an open-access article distributed under the terms of the Creative Commons Attribution License, which permits unrestricted use, distribution, and reproduction in any medium, provided the original author and source are credited.

Introduction: Asthma and COPD contribute significantly to morbidity, mortality, and social-economic burden. Integrative Pulmonary Care center (IPCC) is a specialized program that has an integrative approach to respiratory care. Notably, eligible patients may receive a novel plant based therapeutic option (Jeeva®) in addition to standard of care. Jeeva® integrates several nutraceuticals known to have immune-modulatory, anti-inflammatory andantioxidantproperties. Methods: An evaluation of patient records was performed for all asthma/COPD patients enrolled in the IPCC program who had consented to consume Jeeva®. Demographic data, past medical history, and spirometry data (FEV1, FVC, FEV1/FVC, FEV1% predicted, FVC% predicted, FEV1/FVC% predicted) were collected along with a survey-based assessment of quality-of-life. The primary endpoint was the maximum change in FEV1 and FVC pre-bronchodilator after Jeeva® initiation. A paired students’ t-test was utilized to compare the maximum change post- Jeeva® from baseline. Intent-to-treat analysis was performed using the last-observation carried forward methodology. Results: A total of 26 patients were included for analyses. Median duration of Jeeva® consumption was approximately 6 months (range 1–12 months). There was a statistically significant change in FEV1 and FVC from baseline [1.64 ± 0.72 L to 1.80 ± 0.72 L; (p=0.019) and 2.26 ± 0.80L to 2.50 ± 0.74 L (p=0.004) respectively]. Quality-oflife improved statistically significantly and there was a notable decrease in medication burden. Conclusion: Patients receiving Jeeva® as part of the IPCC significantly improved pre-bronchodilator FEV1 and FVC from baseline. A small improvement in quality-of-life and medication burden was evident. Further studies looking at Jeeva® in a randomized, placebo-controlled, clinical-trial is warranted.

Asthma and Chronic Obstructive Pulmonary Disease (COPD) are major causes of morbidity and mortality globally with COPD being the third leading cause of death [1]. More recently, asthma and COPD are being recognized as overlapping conditions aptly termed “asthma– COPD overlap syndrome” (ACOS) [2]. Pharmacologic options for their management often include short and long acting β2-agonists, anticholinergics, inhaled glucocorticoids and Leukotriene modifiers. However, none of the existing medications or regimens has been conclusively shown to modify the long-term decline in lung function [3].

Every year, approximately $30 Billion is spent out-of-pocket by Americans on complementary health approaches. The Integrative Pulmonary Care Center (IPCC) is a private physician’s office program that specializes in the care of patients with respiratory conditions using traditional and integrative approaches to care. In addition to standardof- care, patients can be initiated on a supplement called Jeeva® [4]. Patients are also introduced to yoga based breathing exercises, and given the opportunity to work with an exercise physiologist to help correct any defects in posture that limit breathing.

Jeeva® is a novel plant based therapeutic option that integrates several nutraceuticals known to have immune-modulatory, antiinflammatory, and antioxidant properties [5-21]. It includes Arabinogalactan, Acai berry, concentrated Aloe polysaccharides, Bilberry, Gum Acacia, Star Anise, and Turmeric Root in varying doses and is available in a capsule form [16]. To assess the degree of clinical benefit and impact on quality-of-life, we evaluated patients enrolled in the IPCC program being treated with Jeeva®.

Upon approval from the Institutional Review Board we performed a review of patients enrolled at an IPCC (http:// integrativepulmonarycarecenter.com/) at a private physician’s office in Roseville, California [16]. The primary practitioner specializes in internal medicine and holds board certification with the American board of Alternative and Integrative Medicine. All patients voluntarily signed an informed consent document before participating in the program.

Patients were selected for analysis if they had a diagnosis of COPD and/or asthma, and consumed Jeeva® (1 capsule twice daily) till at least the next follow-up visit (approximately 2-3 months after enrolment). Those under 18 years of age or pregnant were excluded. Patients were only included if they had a baseline and at least 1 follow up visit with spirometry data (FEV1 and FVC measurements). Forced expiratory volume in one second (FEV1), defines the volume of air that can be forced out in one second after taking a deep breath and forced vital capacity (FVC) measures the volume of air forcibly exhaled from the point of maximal inspiration both of which are accepted objective markers of pulmonary function.

Quality-of-life data was collected using the SF-8 survey. Each question was converted to a numerical score with the lowest possible score being 8 and the highest score being 42. It is important to note that a lower score denotes an improvement in quality-of-life.

A paired students’t-test was utilized to compare all endpoints preand post- Jeeva® with a p<0.05 considered significant. For patients with missing data, an intent-to-treat (ITT) analysis was performed using the last-observation carried forward methodology.

Figure 1: Change in FEV1 and FVC (Top and bottom respectively).

Asthma and COPD result in a significant social and economic burden [22]. According to the CDC, asthma accounts for one-quarter of all emergency room visits in the U.S. each year and over 3,000 deaths each year [23]. The estimated total cost for the two conditions was approximately $68 billion in 2008 [24]. Recently, the Centers for Medicare and Medicaid Services (CMS) expanded the Hospital Readmission Reduction Program (HRRP) to include COPD. The burden of illness of these patients is such that the CMS will now penalize hospitals for what they deem as unplanned readmission for COPD [25]. This is driven by the fact that 23% of COPD hospitalizations are subsequently readmitted within 30 days post discharge [26].

Our findings indicated a significant benefit in pulmonary function markers in patients enrolled in the IPCC program. Benefits in spirometry endpoints were in line with data from previous analyses where Jeeva® improved pre-bronchodilator FEV1 and FVC by 264 mL and 314 mL from baseline, respectively [4]. This current analysis builds on previous work as it also shows a small improvement in quality-of-life. There was also a reduction in medication use in 38% of the patients. This is important as frequency of rescue inhaler use is a surrogate marker of exacerbation of disease [27].

The respiratory system undergoes various physiological, immunological, and anatomical changes with age [28]. The estimated rate of decline in FEV1 is 25-30 mL/yr starting at age of 35-40 years and can double to 60 mL/yr after the age of 70 years. FVC generally declines at approximately 22 mL/yr in healthy subjects (20 to 60 years) [29]. Figure 2 depicts the hypothetical decline in FEV1 over time [2]. It is possible that the incorporation of Jeeva® to standard-of-care in patients with asthma or COPD can direct them away from the typical decline in FEV1 (depicted by the dotted line arrow) but this needs further evaluation. 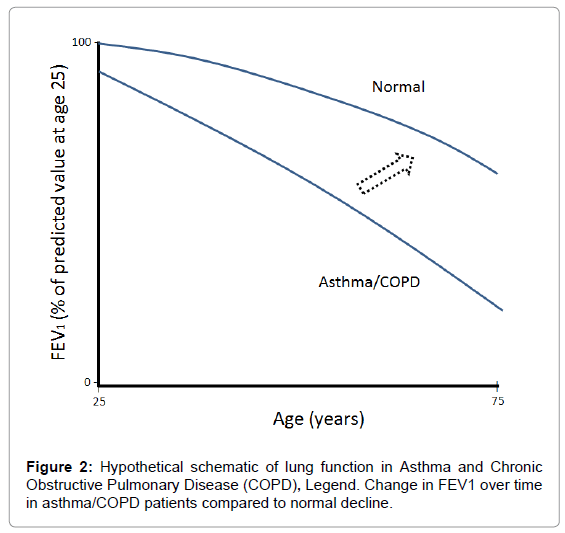 The findings from this report and our previous work together support conducting randomized, double-blinded, placebo-controlled trials with Jeeva®. Other novel, albeit expensive, approaches to optimizing pharmacotherapy include nanoparticle-based drug delivery and innovative inhalers [30,31]. In the future, it would be important to perform cost-effectiveness analyses to assess the ideal integrative approach to minimize the disease burden and optimize quality of life in patients with asthma and COPD.

There are several limitations of note. Primarily, there are innate limitations of a retrospective analysis such as this and it does not infer causality. A lack of placebo arm rules in the possibility of patients simply benefiting from the improved attention received when enrolled in a specialized center such as IPCC. There is compelling data suggesting that a specialized care management model can have a positive outcome on patient health [32]. The compliance rate of yoga breathing was low which could diminish the magnitude of efficacy seen from the IPCC program. However, it strengthens our case for supporting the benefits being primarily driven by Jeeva®. Hospital admissions were not assessed from a review of medical records but from patient recall which is not always accurate. A lack of a control arm and a small sample size pose inherent limitations in data extrapolation and wide applicability.

Patients receiving Jeeva® as part of the IPCC significantly improved pre-bronchodilator FEV1 and FVC from baseline. A small improvement in quality-of-life and medication burden was evident. Further studies looking at Jeeva® in a randomized, placebo-controlled, clinical-trial are warranted.

The authors would like to thank Athena Xides, Pharm.D. and Kunal Shah, Pharm.D. Candidate for their assistance.