Copyright: © 2014 Vijayalakshmi S. This is an open-access article distributed under the terms of the Creative Commons Attribution License, which permits unrestricted use, distribution, and reproduction in any medium, provided the original author and source are credited.

The feeding practices and illness during infancy are of critical importance for the growth and development of children. Though several programmes have been implemented by GOI along with WHO and UNICEF to improve the health status of newborns and infants, child morbidity and mortality rates in rural areas are still higher compared to urban areas in India. Objectives: To study the infant feeding practices, morbidity pattern and care given to infants in a rural area of Puducherry. Methodology: A longitudinal study done in Bahour commune from 1st April 2012 to 31st March 2013. Information regarding background/socio-demographic details, infant feeding practices; and morbidity pattern were recorded in semi-structured questionnaire by house to house visit. Total of 136 infants born during Jan-March 2012 were enrolled. Data were presented as percentages, ratios and Chi-square test was used to find association among variables. p value <0.05 was considered statistically significant. Results: The mean age of study infants during each visit was 3, 8 and 12 months respectively. 64.7% mother’s breastfed their infants within an hour after birth and 72% infants were exclusively breastfed till six months and 5.9% newborns were given prelacteal feed. The incidence of fever, diarrhoea and breathing difficulty were 2.9, 2.9 and 1.8 episodes/ child/ year respectively. On average 93% of mothers continued breastfeeding and gave excess oral fluid during an episode of diarrhoea. Morbidity among children was significantly associated with breastfeeding practices with exclusive breastfed children suffered less in the study area (p<0.05). Conclusions: The overall infant feeding pattern and care given during illness was good among mothers. However, Practices like giving pre-lacteal feed; stopping EBF before six months are still practiced in the study area. Therefore, faulty rearing practices need to be addressed to improve the health status of the infants.

Infants are valuable treasure to the nation. Realizing the importance of child development, United Nations declared 1979 as the International Year of the Child (IYC) [1] and World Health Organisation (WHO) proposed a theme on World health day during 2003 as “Healthy environment for children” and 2005 as “Make every mother and child count” to focus the attention of planners, policy makers, administrators, health and social scientists on various problems faced by children [2].

Optimal infant and young child-feeding (IYCF) practice are crucial for nutritional status, growth, development, health and ultimately [3]. Breast milk is an important source of energy for infants and it provides immunity to fight against illness and reduce mortality. Exclusive breast feeding for six months is an essential component for growth and development of the infant [4]. For children older than six months, breast milk alone is no longer sufficient to meet the nutritional requirement and therefore other foods are needed along with breast milk. Introduction of semi-solid foods after first six months is essential to avoid the malnutrition in early life [5].

Globally seven million children, under five years of age died in 2011 and about one fourth (24%) of deaths occurred in India [3]. Around 86% of neonatal deaths are due to pneumonia, diarrhoea, and preterm births. As per WHO-Child Health Epidemiology Reference Group (CHERG) 2012 estimates, in India the major causes of child mortality in the age group 0–5 years in India are neonatal causes (52%), pneumonia (15%), diarrhoeal disease (11%), measles (3%), injuries (4%) and others (15%) [6].

Several programmes have been implemented by Government of India along with WHO and UNICEF to improve the health status of infants. Many customs are prevalent in India which affects health status of the infants. Understanding of the community and traditional practices of breastfeeding and care given during illness is necessary to implement the effective programme for promotion of new-borns and infant’s health. For the effective child health care delivery, information regarding infant feeding practices and pattern of morbidity is important. This study was done to describe selected newborn and infant feeding practices, morbidity pattern and care given during the episodes of illness in rural area of Puducherry.

The present study was conducted after getting clearance from Institutional Human Ethics Committee. This was a Community based longitudinal study done in the rural area over a period of one year from 1st April 2012 to 31st March 2013. Infants born to mothers during Jan- March 2012 were enrolled for the study through anganwadi registers from Bahour commune during April-June 2012. Total136 newborns were included in the study.

The investigator interviewed the mother in local language using a pre-designed proforma. Each infant-mother was interviewed for about 40 minutes. Mothers were informed through phone prior to each visit to be available in the houses and then house to house visit was done. Information about socio-demographic characteristics, feeding practices, occurrence and management of any childhood illness were collected. General examination was done to all infants (Flow chart 1). 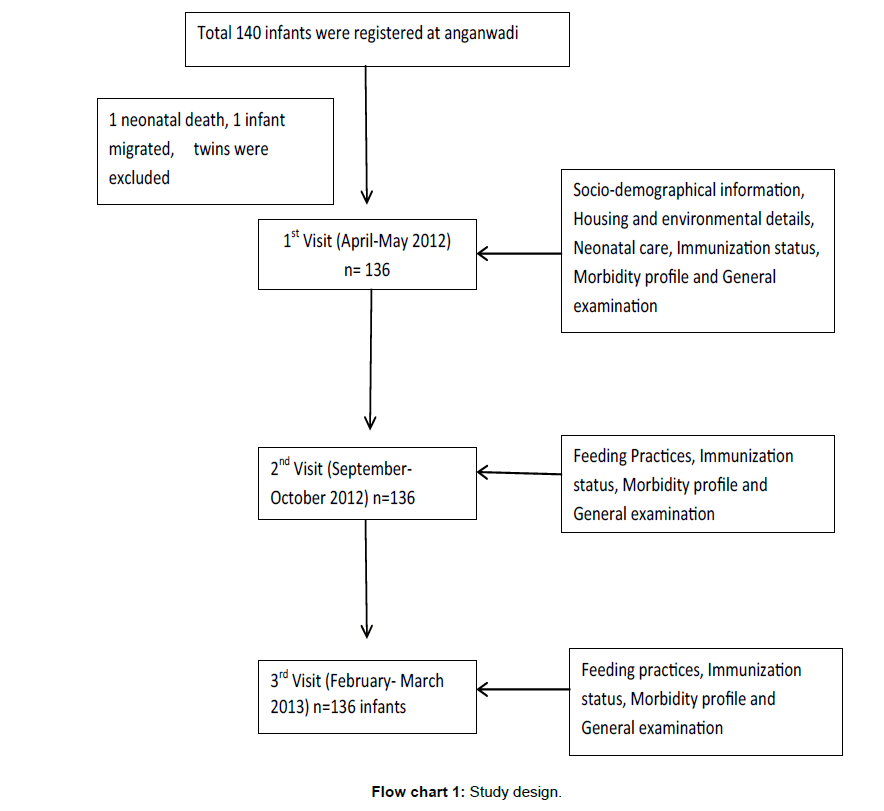 The data was entered and analyzed using Microsoft Excel. Data were presented as percentages and ratios. To find out association between infant care and rearing practices with socio-demographic characteristics and feeding practices, Chi-square test and Fisher’s exact p test were used. p-value <0.05 was considered as statistically significant. 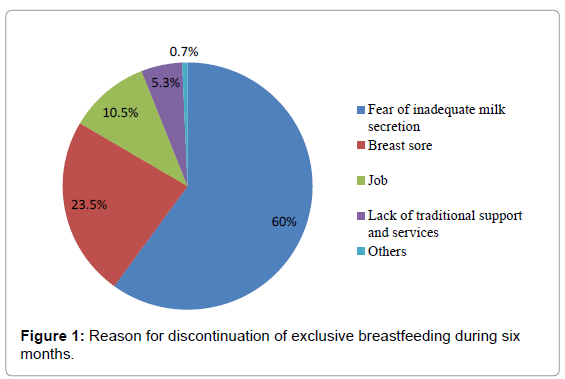 Figure 1: Reason for discontinuation of exclusive breastfeeding during six months.

Regarding nature of complementary feeding, majority (82.3%) of the mothers used animal milk and milk products, 92 (70.6%) used boiled and smashed vegetables and nearly 80 (60%) mothers gave fruits and cereals. Majority (89%) of the mothers continued breastfeeding till the end of one year. Significant difference was observed between male and female infants when continuation of breastfeeding at the end of one year was considered (p=0.03) (Figure 2). 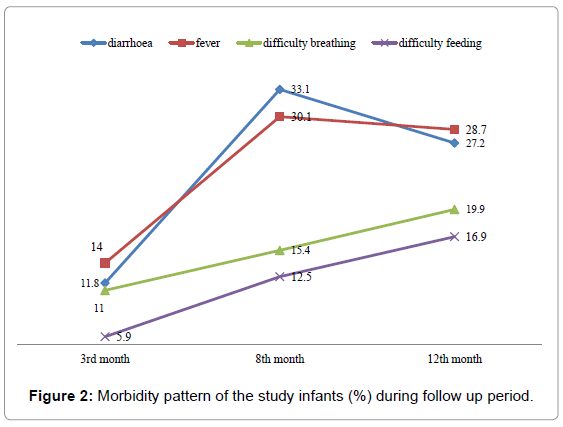 Figure 2: Morbidity pattern of the study infants (%) during follow up period.

Table 2: Morbidity status of study infants during follow up period.

A higher level of morbidity was observed during second visit among study infants followed by morbidity during third and first visit.

Table 3 shows care of sick infants during illness. It was observed that, more than 90% of mothers had given continued feeding with extra oral fluid during the episodes of diarrhoea in all visits. During the study period, total 40 (83.3%) infants were taken to a hospital for difficulty in feeding and 66 (66.7%) children sought consultation during an episode of fever. 52 (82.5%) infants out of 63 were given an antibiotic for difficulty breathing.

Table 3: Care given to sick infants during illness.

Table 4 shows association of feeding practices and morbidity pattern of study infants. Out of eight infants who were given prelacteal feed, seven (87.5%) had diarrhoea during the study period. In the present study, out of 38 infants who did not receive exclusive breastfeeding till six months, 28 (73.7%) had one episode of diarrhoea during the study period, as compared to 34 (34.7%) who received EBF till six months. Significant association were observed between prelacteal feeding (p=0.01), EBF (p<0.001) and infants suffering from at least one episode of diarrhoea.

The present longitudinal study aimed at assessing the infant feeding practices and morbidity pattern in a rural area of Puducherry. This study described the feeding practices, common morbidities and examined their association.

Early initiation of breastfeeding, exclusive breastfeeding for six months and timely introduction of age-appropriate complementary feeding are the key interventions to achieve the Millennium Development Goal 1 and 4, which address child malnutrition and mortality components respectively [7].

Pre-lacteal feeding is almost universal in India; many studies indicate that mothers delay the breastfeeding for several hours to avoid giving colostrum and supplement breastfeeding with other foods or liquids. However, present study observed that percentage of infants who were given prelacteal feed was only 5.9%. Among them 62.5% were given animal’s milk as pre-lacteal feed and 37.5% infants were given honey water. The practice of giving pre-lacteal feed is observed in many countries also. Studies from rural Egypt, South Nepal and Pakistan [8-10] reported that the percentage of newborns that were given pre-lacteal feeds was 44%, 55.6% and 87.6% respectively, which were higher compared to the present study. Studies from other parts of India also reported the practice of giving prelacteal feeds [11-14].

Pre-lacteal feed to a newborn delay the establishment of lactation and also contamination of pre-lacteal food can cause diarrhoea in the newborn [15]. In the present study, association was observed between feeding practices and prevalence of diarrhoea among study infants (p=0.01). Out of eight infants who were given pre-lacteal feed, 87.5% had diarrhoea. It was also observed that, out of 38 infants who were not exclusive breastfeed till six months, 73.7% infants had one episode of diarrhoea during the study period, as compared to 34.7% infants who received EBF till six months. This shows that the exclusively breastfeeding offers the protective effects to the infants in preventing diarrhoea.

Colostrum is a thick, yellow secretion from the breast during initial two to three days after delivery. It is considered as nectar for the newborn. It provides a concentrated source of energy for the newborn which is easily digestible and also offers protection against childhood illnesses [5]. In the present study, 2.2% newborns did not receive colostrum even after two days of birth. Similar observations were reported from two studies conducted in Bangalore [13,14]. However, studies from other regions of India and other countries also showed even higher percentage of mothers discarding colostrum for first two days [10,14,16-18].

IMNCI recommends on-demand breastfeeding or feeding 8 times or beyond to the newborn [22]. In the present study it was observed that, majority of the mothers breastfed their infants on demand (80.1%), similar to the observations made by Joseph et al. [14] in Bangalore (87%) and Bandyopadhayay S K et al. in West Bengal [23].

The major reasons cited by mothers for not breastfeeding their child exclusively till six months were fear of inadequate milk secretion, presence of breast sore, lack of traditional support and time constraints for professional mothers.

One of the important strategies of IMNCI is to reduce the underfive mortality is educating the mother and/or caregiver regarding home-based care of the child during illness and after recovery [22]. The mother and/or care giver should be counselled for signs of severe illness for which the child should be taken immediately to a health worker. NFHS-3 [21] reported 15.1% children less than three years had fever two weeks preceding the survey which was higher than the present study (12%). However, in the present study, 66.7% mothers sought consultation for their infants from hospital during for fever which was lower than DLHS-3 for Puducherry (84.8%) [19].

According to NFHS-3 [21], 24% of all children had diarrhoea in rural area of India which was similar to the present study (24.03%). Studies from other parts of the country also reported prevalence of diarrhoea which ranges from 11% to 35% [27,28]. In the present study, more than 90% of mothers given continued breastfeeding and feeding with excess oral fluid during the episodes of diarrhoea in all visits indicating high awareness regarding home-care management of diarrhoea among mothers and high healthcare coverage in the study area.

EBF (72%) and on-demand feeding 80.1%. Majority (89%) of the mother continued breastfeeding at one year.Mothers adopted home care practices during their infant’s illness. Exclusive breastfeeding till 6 months was less among working mothers as compared to housewives. Faulty feeding practices like discarding the colostrum’s was significantly more among mothers from low socio-economic background.On average 93% of mothers continued breastfeeding and gave the newborn excess oral fluid during an episode of diarrhoea. The infants who were not exclusively breastfeed till six months were more prone for diarrhoea compared with infants who were exclusively breastfed till six months. A higher level of morbidity was observed during second visit among study infants followed by morbidity during third and first visit.