Warthin’s tumor, also known as papillary cystadenoma lymphomatosum or adenolymphoma, is the second most common benign tumor of the salivary glands. It is commonly seen in lower lobe of the parotid gland and affects mainly male in sixth or seventh decades of life. Studies have shown that there is a close association between Warthin’s tumor and cigarette smoking. Preoperative fine needle aspiration cytology (FNAC) of a parotid mass plays a pivotal role in differentiating neoplastic from inflammatory lesion as well as management of patients. We report a case of a 70 year old male chronic smoker who presented with painless swelling in the parotid region bilaterally.

About 80% of parotid tumors are benign neoplasms. Warthin’s tumor is the second most common benign neoplasm of the salivary glands after pleomorphic adenoma, accounting for 5% to 6% of all salivary gland tumors [1]. It is located almost exclusively in the parotid gland and may occur bilaterally or as multiple lesions [2]. Fine-needle aspiration cytology (FNAC) is frequently used to investigate salivary gland lesions preoperatively. It is a rapid, easy to perform, noninvasive, and has minimal complications. The overall accuracy of FNAC in predicting whether a salivary gland mass is benign or malignant ranges from 80% to 100%.Variability in diagnostic accuracy can be ascribed to many factors, including the experience of the cytopathologist and the quality of the FNAC material [3]. Here, we are presenting a case of a 70 year old chronic smoker male patient who presented with bilateral painless swelling in the parotid region.

A 70 year-old male presented with a bilateral painless swelling in the parotid region since past 6 months (Figures 1 and 2). 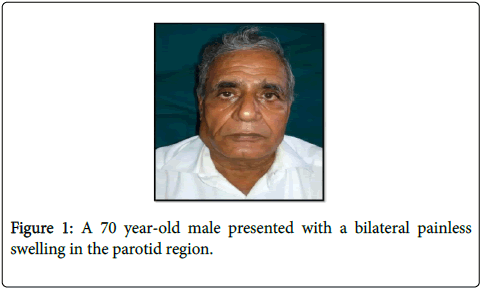 Figure 1: A 70 year-old male presented with a bilateral painless swelling in the parotid region. Figure 2: A 70 year-old male presented with a bilateral painless swelling in the parotid region.

The swelling extended from the angle of the mandible to inferior border of the ear. Swelling on the right side measures 5.5×3.5 cm and 2.0×3.0 cm on the left side and was soft in consistency with defined borders. It gradually increased in size. Personal history revealed smoking habit past 50 years. Patient had undergone a surgery for haemarrhoids 6 months back where he was told about the swelling. There was no pain on palpation and the temperature of the overlying skin is normal. The regional lymph nodes were normal. FNAC was performed under aseptic precautions. The site was prepared using normal saline and betadine and topical local anaesthesia was used. A 10 cc syringe was used for FNAC. Smears prepared were stained with HandE and PAP stains. Cells were oncocytic in nature with abundant pink granular cytoplasm and round uniform nucleus without atypia or abnormal mitosis (Figure 5). Cytological impression of Warthin's tumor was rendered and excision of lump was advised. The patient chose no further treatment and three months after FNAC, the mass remained asymptomatic and essentially unchanged.

Papillary cystadenoma lymphomatosum was first described by Hildebrad in 1895 as a form of congenital cyst of the neck. It is most commonly found in parotid gland, but cases have also been reported in sub maxillary gland [4]. Warthin’s tumor is multicentric in 12-20% of patients and is bilateral in 5-14% [5]. The pathogenesis of Warthin tumor has long been controversial in regard to the origin of both the epithelium and the lymphoid stroma. Hildebrad has ascribed this lesion as a variant of lateral cervical cyst and remnants of branchial pouches [6]. Albrecht and Arzt proposed heterotopic salivary rests in parotid lymph nodes as its origin [7].

Warthin proposed the origin to be heterotopic pharyngeal endoderm [8]. Other theories of histogenesis states the origin to be oncocytes, sebaceous glands, heterotopic lymph node endothelium and thymic anlage [9] Allergro proposed hypersensitivity as the main cause [10]. The role of salivary ductal inclusions in the pathogenesis of Warthin's tumors is uncertain. Smoking may trigger ductal hyperplasia and oncocytic metaplasia in preexisting intraparotid lymph nodes [11]. Although some molecular studies have shown that Warthin's tumor may have a clonal origin [12]. Data from O'Neil demonstrated that a chromosomal translocation of a novel fusion-oncogene is a remarkable feature of some cases of Warthin's tumors which favors that Warthin's tumor is a true clonal and a neoplastic process. However, Nakamura et al. [13] reported that various growth factors and their receptors, extracellular components, and cell adhesion molecules interact and regulate the proliferation and cell attachment of both the epithelial and lymphoid components of this tumor. This supports the theory of an epithelial neoplasm inducing a lymphocytic response in the pathogenesis of Warthin's tumors. Rabia et al. [14] evaluated the role of angiogenesis and lymphangiogenesis in the pathogenesis of Warthin's tumors by quantifying lymphatics and blood vessels immunohistochemically and found that Warthin's tumor is a true neoplastic epithelial proliferation associated with increased angiogenesis and lymphangiogenesis and induces reactive lymph node hyperplasia. Warthin’s tumor affects mainly men in the 6th or 7th decade of life. The case described above is typical of Warthin tumor. The patient’s age, smoking history, lack of symptoms, and delay in presentation are all typical. Most studies have found an average age at diagnosis in the early sixties. Smokers show an increased propensity (8 times more) for Warthin’s tumor. It is hypothesized that retrograde flow of substances (or their excretion) from tobacco smoke into salivary ducts increases the risk for tumor formation [15]. Our case also had history of smoking since past 50 years, and is in co-ordination with Hatch and Shah (2005). They suggested an increased incidence of warthin’s tumor with cigarette smoking.

The tumor is asymptomatic in 90% of patients. Occasionally, patients may note pain, pressure, or rapid growth of the mass. If the mass ruptures, the contents can cause inflammation and acute parotitis. Patients often delay seeking medical care for Warthin tumor. Unique to this tumor is the bilateral presentation, ranging from 5 to 14%. Most bilateral Warthin’s tumor does not occur simultaneously but are metachronous. Most authors have proposed Warthin tumor to be a multicentric or multifocal disease, which explains its bilateral presentation. In the past decade, the incidence of the tumor has doubled. This is not surprising, because the population is aging, and many older patients have a history of smoking. At first, Warthin tumor was seen primarily in white men. It is becoming more prevalent in both African Americans and women. Indeed, the gender ratio now approaches 1:1.1. The increased prevalence in African Americans and women is thought to be caused by increased smoking among these groups [16].

The value of FNAC in diagnosing salivary gland lesions has been widely debated amongst clinicians and cytopathologists. FNAC is major diagnostic tool and is of great relevance in head neck lesions, including major salivary glands as they are easily accessible target sites. In this region FNAC is easy to perform and achieves excellent patient’s compliance, being minimally invasive OPD procedure [17]. Preoperative diagnosis of Warthin’s tumor poses diagnostic dilemma, since cytologically it simulates many other lesions of salivary glands like low-grade mucoepidermoid, acinic cell carcinoma, squamous cell carcinoma, oncocytic carcinoma, oncocytoma, lymphoepithelial cyst etc. The most common mis-interpretation is squamous metaplasia in association with inflammation or degenerated squamous metaplasia which may be misinterpreted as squamous cell carcinoma [18]. A Warthin tumor can be diagnosed by cytology with a high degree of certainty if the diagnostic triad of oncocytes, lymphoid cells, and a ‘‘dirty’’ proteinaceous background are present. This diagnosis is easily made when the smears contain all 3 components; however, in a considerable number of smears, the aspirate contains only 2 or a single component [19].

It is rare for a malignant lesion to be misdiagnosed as Warthin tumor but in studies as many as 26% of Warthin tumors were misdiagnosed as malignant on FNAC. Malignant transformation is very rare and constitutes 0.3% of all Warthin’s tumors FNAC has a good diagnostic accuracy in diagnosing salivary gland lesions. Optimal treatment of Warthin tumor remains somewhat controversial. According to Batsakis, who has written extensively about Warthin tumor, they are “generally regarded as among the most innocuous of salivary gland tumors.” Malignant transformation is very rare and constitutes only 0.3% of all Warthin tumors [20]. Despite this, Yoo et al. recommend superficial parotidectomy but recognize that either local excision or simple observation would be appropriate in selected cases. Their preference is based in part on a recurrence rate of 1.8% after local excision. These may not have represented true recurrences, however, because patients often have multiple Warthin tumors [21].

Warthin's tumour is found almost exclusively in the parotid gland. It is the second most common salivary gland neoplasm, and exhibits male predilection and a strong association with smoking. FNA (fine needle aspiration) has good overall accuracy for diagnosing salivary gland neoplasms. FNAC of a parotid swelling is very useful in distinguishing neoplastic from inflammatory lesions, thus helping further surgical management of the patient. However, extreme care and recognition of limitations of cytology are needed in diagnosing Warthin’s tumor. A better understanding of this tumor could help family physicians maintain a broader initial differential diagnosis.

Copyright: ©2015 Garg D, et al. This is an open-access article distributed under the terms of the Creative Commons Attribution License, which permits unrestricted use, distribution, and reproduction in any medium, provided the original author and source are credited.