Copyright: © 2017 Legesse D, et al. This is an open-access article distributed under the terms of the Creative Commons Attribution License, which permits unrestricted use, distribution, and reproduction in any medium, provided the original author and source are credited.

Background: Food borne diseases are common in developing countries including Ethiopia because of the prevailing poor food handling and sanitation Practices. Food handlers play an important role in ensuring food safety throughout the chain of production, processing, storage and preparation.

Methods: A facility based cross sectional study was employed on 383 food handlers who work in selected 42 public food Service establishments. Data was collected from each food handler’s by direct interviewing and observation of their personal hygiene. Binary logistic regression and multivariable logistic regression analysis was conducted. The strength of the association was measured by Adjusted odds ratio with 95% confidence level, and pvalue <0.05 will be considered statistically significant.

Food can be subjected to contamination with toxic substances and pathogenic organisms during production, transportation, preparation, storage and service. The consumption of contaminated food that contains sufficient quantities of pathogenic organisms and toxic substances will result in food borne disease. The causes of food borne diseases are lack of knowledge in part of food handlers and negligence in safe food handling. It is estimated that in developing countries up to 70% of cases of diarrheal disease may be caused by contaminated food. Food prepared in large quantity is liable to contamination and to the rise of food borne diseases if the strictest principles of hygiene are not maintained [2].

Unsafe food has a human health problem since history was first recorded and many food safety problems encountered are not new. Although governments all over the world are doing their best to improve the safety of the food supply, the occurrence of food-borne disease remains a significant health issue in both developed and developing countries [3].

Thousands of millions of people fall ill as a result of eating unsafe food and in the prevalence of food borne disease many die due to less knowledge and practice on the part of food handlers. Food contamination in developing countries is caused by many factors including traditional food processing methods, inappropriate handling of food, holding temperatures, and poor personal hygiene of food handlers, the safety of food handlers is therefore one of the most important health and safety issues facing most developing countries since it leads to both public health and social Problems [4].

Food safety continues to be a public health problem worldwide because food borne illnesses are widespread. Food borne and waterborne diarrheal diseases together kill about 2.2 million people each year. Outbreak of food borne illnesses have been cited as being responsible for 5000 and 500 deaths each year, respectively in the USA, England and Wales. Reports from other parts of Europe and North America also depict quite a similar trend [5].

Food handlers play an important role in ensuring food safety throughout the chain of production, processing, storage and preparation. This study is aimed to assess the pattern of socio demographic distribution and to determine practice of food handler’s food handling practice. In addition Arba Minch town is visited by different tourists and money food establishment’s area.

The study was conducted in Arba Minch town Public Food Service Establishments. Gamo Gofa Zone is one of the Zones in SNNPR located 505 km to South of Addis Ababa and 275 Km away from the Regional capital of Hawassa. It has 15 woreda and 2 town administrations. The town has 86 higher levels and 55 lower level Public Food Service Establishments. The health facility distribution in the town is 1 general hospital, 2 Health centers and 11 health posts.

Since the study design is cross sectional analytic study the sample size is determined for prevalence based on the following assumption was taken into consideration desired precision (d)=5%, 95% confidence level and proportion of 71.4% prevalence of good practice food handling practice towards food sanitation [9,10].

The sample by taking 10% none response rate the final sample size is 345.

The sample size for factors by adding 10% none response rate it become 387. The final sample size was determined by comparing all possible result from the two option for data collection is taken from second objectives to get maximum sample size 387.

Data was collected from each food handler’s direct interviewing. Pre-tested structured questionnaire adapted from different literature was used to collect socio demographic and others variables. First the questioners was prepared in English and translated to Amharic and pre tested on 5% food handler’s out of the study area in shell town before actual data collection and correction and modification was done based on the gap identified during interview. Six diploma Nurses was recruited as data collectors and supervised by 3 public health professional. Two days training was given on the aim of the research, content of the questionnaire, and how to conduct interview for data collectors and supervisors to increase their performance in field activities. The Collected data was being checked every day by supervisors and principal investigator for its completeness and consistency. Data collection was conducted from December 1 to 20 for consecutive 20 days.

Data was coded and entered in to Epi info Version 3.5.1 and exported to SPSS version 20 for analysis. Descriptive Frequencies was calculated to describe socio demographic characteristics of the study population. Bivariate logistic regression analysis was conducted to assess the crude association between dependent and independent variables. Finally Variables which shows association in bivariate logistic regression analysis and have P-value less than 0.25 was entered in to multivariate logistic regression model, to identify significant factors associated with outcome. Finally significant factors was identified based with 95% Confidence level which is not include none value and P-value less than 0.05.

The proposal will be submitted to the Research ethics committee (REC) of Addis continental institute of public health. Ethical clearance will be obtained from Addis continental institute of public health. Permission letter will be obtained from Arba Minch town trade and industry office. Verbal informed consent from each study participant will be obtained after clear explanation about the purpose of the study. All the study participants will be reassured that they would be anonymous. Names or any personal identifiers will not record. Respondents will be clearly told about the study and the variety of information needed from them. They will be given the chance to ask anything about the study and made free to refuse or stop the interview at any moment they want.

Socio demographic characteristics of the respondents 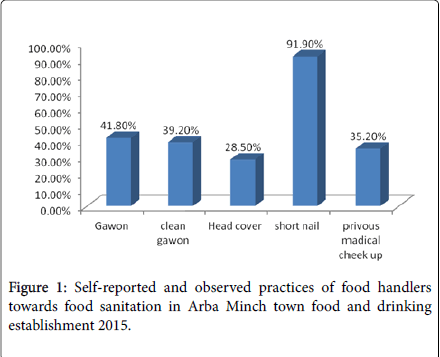 After conducting univariate analysis to cheek data completeness and missing value of the data. The variables first analyzed by binary logistic regressions with 95% confidence level.

The current study showed that there was poor practice of food handling in the majority of the handlers. From all the interviewed respondents 32.6% food handlers had good practice and 67.40% had poor practice towards food sanitation. This finding is relatively lower than study conducted in Southeast Asian (54.7%), 71.4 Ethiopia, in Alexandria University (72%) and higher than study done in Bangkok (15.2%). This variation in prevalence of food handler practice is due to difference in study setting, study population. For example a study conducted in Alexandria utilizes women working in Alexandria University and related socio demographic difference. The probable reasons for the differences might be due to difference in socio demographic, environmental factors difference and years of study and countries development difference.

Food handlers who were in age groups 29-34 and ≥ 35 years 3.457 (1.63, 7.35) and 3.454 (1.78, 6.69) more likely have good practice on food handling as compared to their counter parts, this is supported by study done in different setting [8,9]. This is might be food handlers who have long service years develop or acquire better experience on food handling practice due to repeated exposure of the work as compared to those who work for short duration in food establishment.

Food handlers who attend food training in the past time 10.27 (2.34, 14.78) were more likely have good practice towards food sanitations. The result is supported by study conducted in Italy, Bankok, Gana, Gondar [9,12,13]. This is due to the fact that when food handlers were properly trained they can take the necessary precautions to avoid malpractice in food handling. Therefore food handlers should attend proper training in the basic principle of food safety and rules of personal hygiene in order to improve their practices in food handling. Previous training on food hygiene influenced the likelihood of medical examination among food establishments.

The current study reveals that relatively low good practice of food handling practice was observed. Relatively low practice was observed in wearing clean gown and head cover, shorting of finger nails and medical screening (medical cheek up). Lack of solid waste management facility, dish washing facility and pipe (running) water in kitchen area were the identified gap in Arba Minch food establishments. Food hander whose age greater than 29-34 and ≥ 35 years, having supervisor, medical cheek up and training on food sanitation in the past were the identified significant factors associated with food handlers practice. Continuous sanitary inspection should be performed regularly on food handler’s general personal hygiene practice and on environmental sanitation of food establishment Giving training, medical screening and cheek up is mandatory for food handlers to improve their practice in food sanitation. Recruiting supportive supervisor for their facility should be considered for better and improved sanitation practice of food handlers. Maintaining and establishing solid west disposal and running water in kitchen area to improve the overall sanitation of food establishments is recommended.

We would like to thank Arba Minch University and our deepest gratitude goes to data collectors, Arba Minch town trade and truism office for their cooperation during this research activity.

Eskezyiaw Agedew, Desta Haftu and Marlign Tilahun: Involved in the write up of methodology of proposal and research work. All authors approved the manuscript.