Fraction of Fatal Accidents Attributable to Alcohol in Russia

Copyright: © 2015 Razvodovsky YE. This is an open-access article distributed under the terms of the Creative Commons Attribution License, which permits unrestricted use, distribution and reproduction in any medium, provided the original author and source are credited.

Accidents and injuries are among the leading cause of death and disability in many countries [1]. Alcohol is the major risk factor for fatal accidents and injuries, contributing to approximately one third of all deaths [2-4]. A causal link between alcohol and injuries has been established from both individual and population level studies [1,5-8]. A systematic review of emergency department studies, published between 1995 and 2005, revealed that injured patients were more likely to be positive for BAC (blood alcohol concentration) at the time they were admitted and to report drinking within six hours prior to the injury event compared with those who were not reporting with injuries [1]. Of all alcohol-attributable deaths globally, WHO indentify 12% as being a result of intentional injuries and 29.6% being a result of unintentional injuries [9]. There is a dose-response relationship between alcohol and injury, with risk increasing with an increasing amount of alcohol consumed [4]. Alcohol-related accidents and injuries are more closely related to pattern of drinking than to the overall volume consumed [5,10-13].

Accidents and violence have been indentified as the largest contributors to alcohol-related excess deaths in Russia [14-16]. Accumulated research evidence also suggests that the combination of high overall level of alcohol consumption with the binge drinking pattern of strong spirits (vodka) is responsible for Russian’s high and sharply fluctuating accident death rates [17-20]. A large retrospective case-control study in three Russian industrial cities found doseresponse association between alcohol consumption and mortality from accidents: drinking of three or more bottles of vodka per week was strongly associated with accidents deaths both among men (RR= 6.07; CI: 5.27-6.98) and women (RR= 8.56; CI: 7.0110.45) [21]. In present study we will test the hypothesis of the close aggregate level link between alcohol and accident mortality in Russia using data on overall alcohol consumption and sex-specific accident mortality rate between 1970 and 2010.

The data on sex-specific accident mortality rate per 1000.000 of residents combining several categories of death (Table 1) were taken from the Russian vital statistics registration system. The Rosstat's cause of death classification has undergone several changes in recent decades. Until 1988 the cause of death classification was based upon the Soviet nomenclature which had a limited number of causes of death in comparison with the International Classification of Diseases (ICD) system. From 1989-1998 Rosstat used a coding scheme that was based on ICD-9. From 1999 a new coding system based on ICD-10 was introduced. The Russian coding system is claimed to be compatible with ICD-9 and ICD-10 [22,23].

We used autoregressive integrated moving average techniques (ARIMA), that has been suggested by Box and Jenkins [25], to estimate the relationships between the annual per capita alcohol consumption and accident mortality time series in Russia. Since the bevariate correlations between two raw time-series are usually spurious due to common trends [26], these trends are removed by means of a differencing procedure. This procedure reduces substantially the risk of spurious correlations. The process of removing the confounding variations is referred to as “prewhitening”.

The effect of alcohol consumption on accident mortality rate will be expressed in terms of alcohol-attributable fraction (AAF), which is interpreted as the proportion of accident deaths that is attributable to alcohol. AAF can be calculated from the estimates obtained in ARIMA models according to formula: AAF=1-exp(-bX), where X is alcohol consumption per capita and b is the estimated effect parameter [27]. To examine the relation between changes in the alcohol consumption and accident mortality across the study period a time-series analysis was performed using the statistical package "Statistica". 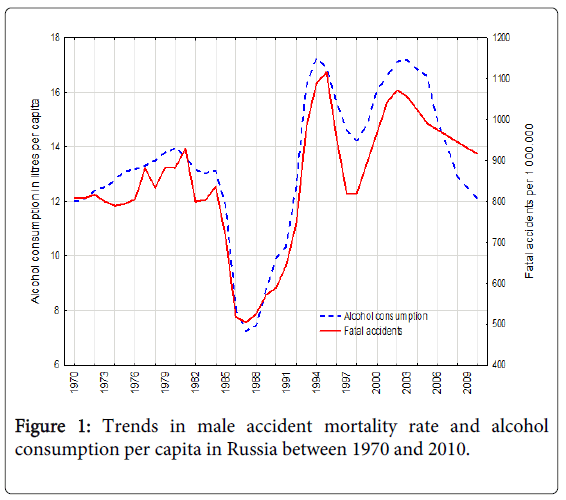 Figure 1: Trends in male accident mortality rate and alcohol consumption per capita in Russia between 1970 and 2010. 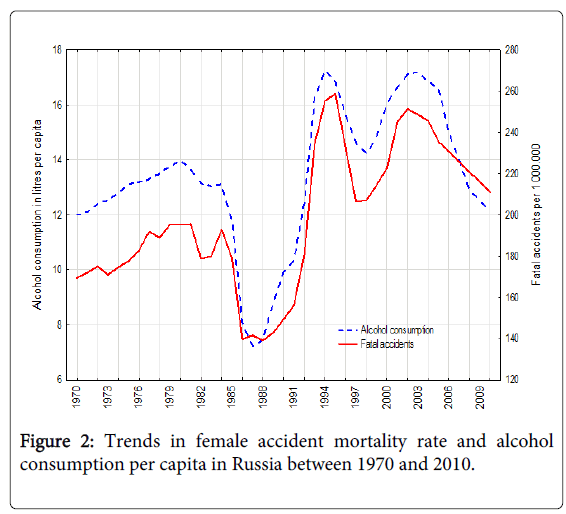 Figure 2: Trends in female accident mortality rate and alcohol consumption per capita in Russia between 1970 and 2010.

The graphical evidence suggests that the temporal pattern of Russian accident mortality for males and females fits closely with changes in alcohol consumption per capita (Figures 1 and 2). There were sharp trends in the time series data across the study period. These systematic variation was well accounted for by the application of firstorder differencing and the specification of a first order moving average parameter. All of the final univariate models meet the diagnostic criterion (i.e., none of the autocorrelation functions are significant at the 0.05 level). After prewhitening the cross-correlations between alcohol consumption and accident mortality time series were inspected. There was a statistically significant cross-correlation between per capita alcohol consumption and accident mortality for males and females at lag zero.

The specification of the bivariate ARIMA model and outcome of the analyses are presented in Table 2. According to the results, total alcohol consumption is a statistically significant associated with both male and female accident mortality rates, implying that a 1-litre increase in per capita alcohol consumption is associated with an increase in male mortality of 7.3% and female mortality of 6.4%. Table 2 also shows the relative proportion of alcohol-attributable deaths to all accident deaths by gender. The results of the analysis suggest that 62.4 % of all male deaths and 56.4% female accident deaths in Russia could be attributed to alcohol.

The outcome of the time-series analysis suggests a positive and statistically significant relationship between accident mortality rate and population drinking in Russia. Therefore, the contemporaneous association between the two variables may support the point that binge drinking is an important determinant of accident mortality in Russia. In an international comparison, Russia stood out with an alcohol effect that was larger than what had previously been estimated for the Western Europe [7].

In agreement with previous studies, we have found the gender differences in the association between per capita alcohol consumption and accident mortality rate, which mean that the impact of changes in per capita alcohol consumption appear to be larger on male accident mortality [7]. The harmful drinking might be responsible for the gender differences in alcohol attributable deaths. The population surveys from Russia show consistently higher rates of binge drinking among men than women. Indeed, the results of study carried out in Archangelsk suggest that 61.9% of male and 25.7% of female industrial workers had a consumption pattern that was hazardous according to the AUDIT definition [28].

It is likely that a combination of factors such as what is consumed and how it is consumed underlies the high accident mortality rate recorded in Russia [23]. Elucidating the phenomenon of high accident mortality rate in Russia, however, does little to understand the reasons for it dramatic fluctuations across time. Most commentators agree that the affordability and availability of vodka is one of the most important predictor of the dramatic fluctuations in accident mortality in Russia during the last decades [16,29]. One of the intriguing phenomenons in this context is the substantial decline in accident mortality rate between 1980 and 1983. In the early 1980s the new Soviet leader Andropov realized that the mass drunkenness is the major threat for soviet system and saw a great opportunity to increase the labor productivity in a sobriety up of the nation. He took a number of steps in this direction using police methods to strengthen labor discipline and to fight against drunkenness in the workplace [16]. During this campaign, workers found not at work were picked up by the police with the idea that fear would impose iron discipline in the country. It seems plausible that this policy resulted in a decline of both alcohol consumption per capita and accident mortality rates. Similarly, the sharp decline in the accident mortality rate in the mid-1980s corresponds with the Gorbachev’s anti-alcohol campaigns, which significantly reduced vodka consumption by limiting its availability. In particular, in August 1985 the price of vodka raised by 25%, while in August 1986, there was a further increase in the price of vodka [16].

The dramatic increase in the accident mortality rate in the early 1990s corresponds to the dissolution of the Soviet Union and the profound socioeconomic changes occurring during the transitional period to post-communism. Treisman argue that the increase in heavy drinking of vodka in the early 1990s, which explains much of the rise in mortality, resulted largely from an increase in the affordability of vodka [30]. With price liberalization in 1992, vodka became much more affordable because of a dramatic drop in its relative price. The increase of vodka consumption in this period was also due to increase of its availability following the abolishment of the state alcohol monopoly in January 1992 [16]. In the period from 1995 the real vodka price recovered somewhat until 1998, after which point the trend turned down again [16]. After 1998, alcohol poisoning deaths increased as well.

Since 2002, Russia has experienced steep decline in the accident mortality rate and downward trend in the population drinking. A coincidence in the accident mortality and alcohol consumption trends allows us to hypothesize that the reduction in the accident mortality rate during the last years might be attributed to the implementation of the alcohol policy reforms in 2001-2006, which increased government control over the alcohol market [31]. The policies included strict regulations requiring of alcohol products, which resulted in a decline in a distributors and increased consumer prices. Making vodka less affordable through differential taxation was an essential element of the Russian alcohol policy [32,33].

The findings in this analysis are subject to several limitations as a number of factors may have affected the results. This principally applies to the quality of the data used. An earlier study of violent mortality data from the Soviet period concluded that they were not deliberately falsified [22]. Nevertheless, a rising rate of “injury death of undetermined intent” in the post-Soviet period may indicate declining quality in accident mortality statistics [34].

The author would like to thank the anonymous reviewers for their valuable comments and suggestions on an earlier version of this paper.