Copyright: © 2016 Adil SO, et al. This is an open-access article distributed under the terms of the Creative Commons Attribution License, which permits unrestricted use, distribution, and reproduction in any medium, provided the original author and source are credited.

Health is a basic necessity from which no living life can be desisted as the growth of any country’s population is hugely affected by its health system and policies. According to World Health Organization (WHO), universal coverage of healthcare has a direct impact on health of its population. The goal of universal health coverage is basically to provide health services to all people without disposing them to financial obstacles particularly those who are paying for it [1].

Medical health insurance can be regarded as an integrated component of social health insurance which covers universal health coverage through possible organizational mechanisms. It basically stipulates healthcare for identification of diseases and for provision of health services primarily on basis of equity [2,3].

In low and middle income countries like Pakistan, high levels of out-of-pocket expenditure (O.O.P) is the foremost and an important issue that needs to be addressed [4,5]. Considering the fact, easy access to affordable health insurance is an essential need and utmost requirement in these countries.

Ample number of research studies have emphasized to view health insurance coverage as a distinguished need [7-9]. In this regard, the role of care managers which includes health specialist, trained healthcare staff, and nurses can function effectively in fostering the need of healthcare reforms particularly in developing countries. A project conducted by Ciccone et al. has reported significant findings which states that resilient partnership between care managers and empowering patients can have positive impact on the health of patients [10]. The findings can be utilized to develop and implement stringent policies and reforms needed to make health insurance coverage accessible to everyone. The effective role of care managers in this regard is of added value.

Access to health services is one concept but access to universal health coverage stands against barriers related to poor understanding of health systems and lack of interest particularly in developing countries of the world. However, implementing health insurance reforms in developing countries is still a development issue. Designing and implementing health insurance reforms on basis of evidence-based practice requires a definitive health system framework which can allow universal health coverage to function within the health system by using approaches that can raise revenues so as to enable purchase of healthcare services. Considering this fact, it can also be assumed that by fostering implementation of such health insurance functions can contribute towards covering and reducing the healthcare cost as well as coverage of right health services to right people on basis of equity and justice. Although, there are numerous frameworks and healthcare models available but are linked to economic growth, decisive policy making accompanied with an increase in government spending on healthcare in the country [9,11,12].

An online survey was conducted from July 2015 to September 2015 and 700 individuals with a minimum of 14 years of education were contacted via emails and messages on social media. Participation was completely voluntary and anonymous. Google spread sheet was used to gather all the information. All information collected was kept confidential. However, the information collected was regarding the health insurance coverage, reasons for not availing health insurance, monthly health expenditure, problems incurred in getting treatment from the doctor in last 12 months and about hindrance in getting medicine in last 12 months. Statistical package for social sciences (SPSS) version-20 was used for statistical analysis. Logistic regression model was used to determine the relationship of health insurance coverage with different variables. All variables with a p-value of less than 0.15 from univariate models were included in multivariate logistic regression so as to determine the most related factor with health insurance coverage among the survey participants.

The overall response rate was approximately 14.14%. Baseline characteristics of the participants are shown in Table 1. 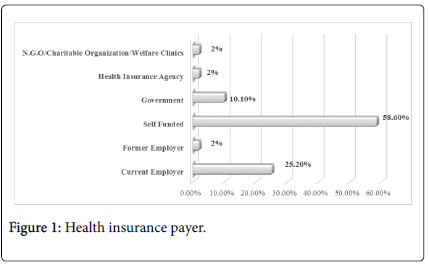 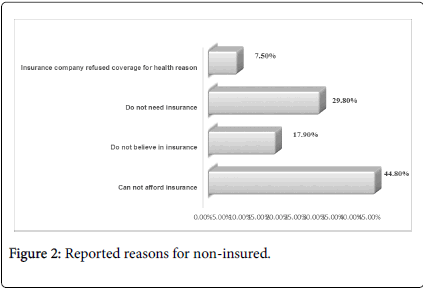 The results of our survey have revealed that majority of the study participants had noteworthy difficulty and hindrance in terms of availing and access to health insurance coverage. Among the total survey respondents, only a quarter were found to have health insurance. Considering the response rate of the participants, the results findings can be regarded as an underestimation of actual utilization of healthcare services among these educated citizens of Karachi.

According to the findings of this survey, health insurance coverage was predominantly found higher among men as compared to females which is in concordance to other research studies conducted earlier [13-15]. Although, in the developed part of the world, where health plans, healthcare act and reforms prevail, the gender rating regarding health insurance is also still debatable. It is however; stated that women tend to cost slightly more than men to get insured essentially which is attributable to expenses of maternity i.e. childbirth and care [16].

It is therefore important to design and implement health insurance on basis of evidence-based practice. Moreover, interventions and policies along with a definite political will are also needed in order to plan and design medical health insurance system principally for the people living in low and middle income countries [21,22].

The present survey showed significant financial obstacles in getting health coverage among individuals with no health insurance. It can be concluded that there is a dire need of efforts along with a convincing political will regarding affordable access of health insurance coverage to all people particularly in developing countries like Pakistan.