Copyright: © 2016 Mañez AN, et al. This is an open-access article distributed under the terms of the Creative Commons Attribution License, which permits unrestricted use, distribution, and reproduction in any medium, provided the original author and source are credited.

Vaccination is the public health technique that has saved most lives. In our environment we had fallen in a stabilization and even regression in the campaigns of vaccination. A health management intervention is carried out with the involvement of the managers of the Management of integrated care of Albacete for the improvement of the coverage of vaccination against influenza and pneumococcus. This involvement has led to better coordination with primary health care staff and patient awareness that vaccination has increased over previous campaigns.

Vaccination is a sanitary technique that is applied to the healthy population susceptible to disease, with the purpose of cutting the transmission of the infection and eliminating the susceptibility to the disease, also called active immunization. During the twentieth century vaccination has been one of the measures with the greatest impact on public health, since its administration has managed to reduce the burden of disease and mortality from infectious diseases in childhood [1,2].

Some vaccinations given in childhood do not induce lasting immunity for life, so if programs are not reinforced with doses after the years, vaccinated people become susceptible again and therefore at risk of becoming ill [3].

The need to be vaccinated does not end when you become an adult. Vaccines are not just for children. No matter how old we are, we all need vaccines to protect against serious and sometimes fatal diseases. The protection of the vaccines you received as a child may disappear over time, which could put you at risk for new and different diseases. It is therefore of great importance to extend vaccination policies or recommendations to these population groups in order to complement child vaccination programs and strengthen their impact on infection control [4,5].

In general terms, all adults with incomplete or unvaccinated vaccination in childhood should complete the vaccine scheme correctly. For some diseases, vaccination correction has no age limit, such as tetanus and diphtheria, for others, vaccination is recommended when the person has not passed the disease and is not immunized, as with measles and rubella. The timing also contains the indications of memory doses if the immunity is lost over time. Finally, given that older people have poorer immune system responses, making them vulnerable, the schedule also includes new vaccination recommendations from the age of 60 years [6].

In addition, certain people with chronic pathologies, or who are in a peculiar situation or who perform a certain work, constitute the socalled risk groups for immune-preventable diseases, against which it is recommended to be vaccinated, these people have a greater risk of suffering. This disease has complications and transmits to more vulnerable people [7].

Annual influenza vaccines are very important especially in people over 65 years and chronic patients and at risk because in these groups infection by influenza virus causes serious complications that can even lead to death.

Despite these benefits, influenza vaccination coverage is often low, while the World Health Organization (WHO) recommends coverage of more than 75% in a recently published article. It refers to a "Suspension to Autonomies in Flu Vaccination" since none Reached the recommended figures: La Rioja 66.5%, Basque Country 60.19%. Castilla León 66.10%, Navarra 60.02% Castiilla the spot 60% above and Ceuta 28.91% Melilla 38.13% and Baleares 45.90% below, our CLM Community is about 62% [5,6].

Another recommended vaccine for people over 65 years of age and people with immunosuppression is the pneumothorax that is put free of charge in our region and prevents pneumococcal (ENI) Invasive Disease that produces 60% Pneumonias, 34% sepsis and 5% meningitis with very serious consequences. Therefore it is recommended to vaccinate the risk groups to improve the prognosis of the patients and it is necessary to increase the vaccination coverage in all the groups in order to reduce the mortality by ENI. Therefore the goal is to increase vaccination coverage in adults for influenza and pneumococcus.

In 2012 there is a relaxation in the campaigns of vaccination against influenza and pneumococcus with stabilization and even drops of coverings. In the national press is published "Suspended in Population vaccinated (Ministry of Health of Spain: National Network of Epidemiological Surveillance) Optimal figures WHO 75%.

• In principle, it is necessary to involve the primary care professionals (doctors and nurses). For this, an awareness campaign is initiated on the importance of vaccination to groups at risk. Meetings are held with doctors and nurses, both in groups and separately.

• At meetings with medical coordinators and nursing, emphasis is placed on the importance of vaccination

• Meetings are held with the primary care teams.

• And it includes the increase of influenza and pneumococcus vaccination coverage as an important objective of the management contract of the primary care team in order to obtain economic incentives.

• During the campaigns, periodic information is provided on the coverage achieved and comparing the equipment to each other.

• At the end of each year the management contract of each center is analyzed and economic incentives are paid according to the objectives achieved.

In the vaccine campaigns of 2013 and 2014, all primary care teams in the Albacete Integrated Management Unit increased their influenza vaccine coverage significantly, 65% and 72%, respectively. Even in the health care staff as a risk group the sensitization led to high coverage (Table 1).

Table 1: Vaccination of health personnel of the integrated management of Albacete compared to the rest of managements.

More than 50% of the primary care teams managed to reach the goals of the Ministry of Health (Figure 1). Regarding pneumococcal vaccination, primary health care was given to vaccinate all persons who were or had reached the age of 65, obtaining high coverage (Table 2). 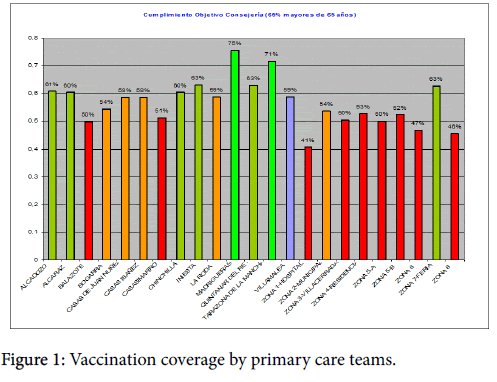 The involvement of managers of Integrated Management of Albacete in improving the coverage of influenza and pneumococcal vaccination increased coverage of these [8]. This involvement has led to better coordination with primary health care staff and patient awareness that vaccination has increased over previous campaigns.

This project was based on a baseline condition in which vaccination coverage against influenza and pneumococcus had been stabilized and even reduced by the neglect of both patients and responsible health professionals [9]. A responsible commission is created to stimulate and increase the coverage, is formed by members of the management and the medical and nursing coordinators of the primary care teams in the area.

Vaccinations have succeeded in reducing the burden of disease and mortality from infectious diseases. Primary care is the natural area of prevention and health promotion, so from here we must promote vaccination. The coordination of management teams and primary care professionals improve vaccine coverage.