Influence of Bile Salts as Excipients in Ranitidine, Aminophylline and Phenobarbital Tablets on Dissolution Rate

Copyright: © 2017 Pocuca M, et al. This is an open-access article distributed under the terms of the Creative Commons Attribution License, which permits unrestricted use, distribution, and reproduction in any medium, provided the original author and source are credited.

Aim: The aim of this study is to investigate the influence of bile salts, sodium cholate, sodium 12-ketocholate and sodium dehydrocholate, as excipients in ranitidine, aminophylline and phenobarbital tablets on dissolution rate.

Results: Dissolution rate is increased significantly in all investigational groups comparing to the control group in all three drug substances.

Discussion: Presented results are very favourable and encouraging in case of dissolution enhancing and should be further investigated, especially in drug substances that are classified in class II and IV as per Biopharmaceutical Classification System (BCS) classification.

Bile acids are amphyphilic molecules with two functionally different molecular surfaces, convex of steroid core that is hydrophobic and concave that is hydrophilic. This coexistence of non-polar and polar surfaces influences their physico-chemical properties [1-4] such as formation of self-association micelles that have significant role in the physiology of the metabolism of fats, absorption of liposoluble vitamins and hydrophobic drugs. Beside their physiological role, micellar solutions of bile acids can solubilizate poorly soluble organic substances [5]. Furthermore, bile acids have a promoting effect in the transport of some polar drugs [6]. It has also been shown that the glycosylated derivates of bile acids facilitate transport of insulin and calcitonin through cell membrane [7]. On the other hand, it has been observed that hydrophobic cationic drugs enter the interaction with bile acid salts [8]. Cholic acid keto derivates prolonged the analgesic effect of lidocaine [9]. Pharmacological studies on promotory action of keto derivates of cholic acids, first of all of 12-monoketocholic acid indicates that keto derivatives of bile acids are of growing interest from a biomedical point of view [10-13]. Bile acids have also been studied as permeability enhancers of other biological membrane such as skin, cornea and the blood-brain barrier [14]. In pharmacological studies bile acids keto derivates are of special interest as introduction of keto group in bile acid molecule leads to Critical Micellar Concentration (CMC) increase which results in decrease in membrane-toxic effect associated with bile acids [15].

Ranitidine hydrochloride is highly soluble in water (24.7 mg/mL) pH of water solution is 4.5-6 [16,17]. It is an acidic salt of a weak base ranitidine and has two pKa values, 2.7 (side chain) and 8.2 (dimethylamine). Per oral absorption is variable, biological availability after per oral dose of 150 mg is 50% (in the range from 40 to 88%), volume of distribution is 1.4 L/kg and elimination half time is 2.5 to 3 hrs. Ranitidine has an unpredictable dose-response ratio i.e., doses of 75, 100 and 150 mg lead to the inhibition of hydrochloride acid overnight in the following percentage: 95, 96 and 92% [16,18]. According to Biopharmaceutical Classification System (BCS) ranitidine belongs to a class III i.e., high solubility-low permeability drugs [19,20].

Aminophylline, theophylline ethylenediamine, is highly soluble in water (one g dissolves in 25 mL of water to give a clear solution), pH of water solution is alkaline. It is a weak base, pKa value is 5.0 [21,22]. Absorption from gastrointestinal tract after per oral or rectal administration is incomplete, slow and variable. Approximately 79% is converted into theophylline. Upon per oral administration of non-coated tablets peak concentration in plasma is reached in 2 hrs. Mean volume of distribution is 0.5 L/kg. Elimination kinetics is highly variable, half-life of elimination is 7-9 hrs in adults, non-smokers, 4-5 hrs in adults, smokers, 3-5 hrs in children and 20-30 hrs in premature babies [23]. According to BCS theophylline belong to a class I i.e., high solubility-high permeability drugs [24].

Phenobarbital is hardly soluble in water (1.11 mg/mL), pH of saturated water solution is 5 [25]. It is a weak acid, pKa is 7.6 [26]. Approximately 80% of per oral dose is absorbed and is distributed in all tissues and central nervous system, peak concentration is reached after 16-18 hrs i.e., phenobarbital has a slow onset of therapeutic effect. Volume of distribution is 0.7 to 1 L/kg. Plasma life halftime is 50-120 hrs in adults and in children 40-70 hrs [26-28]. According to BCS phenobarbital also belongs to a class I [24].

Bile acids and their salts are a special group of biological surfactants and were therefore investigated in this study as excipients in tablets. The aim of this study was to investigate effectiveness of bile salts as excipients used instead of an equimolar concentration of a commonly used excipient magnesium stearate. Due to their physico-chemical properties, it was expected that they would act as surfactants (ionic) and as lubricants.

Cholic acid (Sigma, New Zealand, 98%) was used as the starting compound for the synthesis of its keto derivatives. 3α,7α- dihydroxy-12-keto-5β-cholanoic acid (12-monoketocholic acid) and 3,7,12-triketo-5β-cholanoic acid (3,7,12-triketo-cholic acid or dehydrocholic acid)were prepared according to the procedures published earlier [29,30]. Investigated bile acids were transformed to sodium salts by the known procedure [31].

Table 1: Substances used for preparation of tablets containing ranitidine hydrochloride as active compound (expressed in mg/tablet). *One of the four substances in each of the four groups.

Table 2: Substances used for preparation of tablets containing aminophylline as active compound (expressed in mg/tablet). *One of the four substances in each of the four groups.

Table 3: Substances used for preparation of tablets containing phenobarbital as active compound (expressed in mg/tablet). *One of the four substances in each of the four groups.

All chemicals used for a preparation of solutions were pro analysi (p.a.) degree of purity.

For all dissolution testing that were performed, solution of potassium dihydrogen phosphate (0.05 M, pH 4.5) was used. Phosphoric acid (85%) and sodium hydroxide (6 M) were used for pH adjustment.

For a preparation of mobile phase for HPLC analysis, methanol, 0.1 M ammonium chloride and deionised water were used.

Ranitidine hydrochloride samples obtained from dissolution were analysed for ranitidine hydrochloride concentrations at 314 nm. The mobile phase was a mixture of ammonium chloride (0.1 M) and methanol (15:85 v/v), injection volume 10 μl. The flow rate was 1.5 ml/ min. Under these conditions, the retention time for ranitidine was 1.18 min. For calibration curve concentration range was 0.01-0.1 mg/ml, R=0.9980 [36].

Aminophylline samples obtained from dissolution were analysed for aminophylline concentrations at 273 nm. The mobile phase was a mixture of methanol and water (45:55 v/v), injection volume 10 μl. The flow rate was 2 ml/min. Under these conditions, the retention time for aminophylline was 1.24 min. For calibration curve concentration range was 0.01-0.2 mg/ml, R=0.9946 [37].

Phenobarbital samples obtained from dissolution were analysed for phenobarbital concentrations at 235 nm. The mobile phase was a mixture of methanol and water (50:50 v/v), injection volume 10 μl. The flow rate was 1.2 ml/min. Under these conditions, the retention time for phenobarbital was 3.80 min. For calibration curve concentration range was 0.005-0.1 mg/ml, R=0.9999 [38].

Results for dissolution testing are presented for ranitidine in Table 4 and Graph 1; aminophylline in Table 5 and Graph 2 and for phenobarbital in Table 6 and Graph 3. Graph 1: Dissolution test: % of dissolved ranitidine. Dissolution rate is increased in all three investigational groups in comparison to the control group and significant increase is seen at 10 and 20 min. There is no significant difference between investigational groups. The highest increase is shown in case of dehydrocholic, then 12-monoketocholic and then cholic salt. 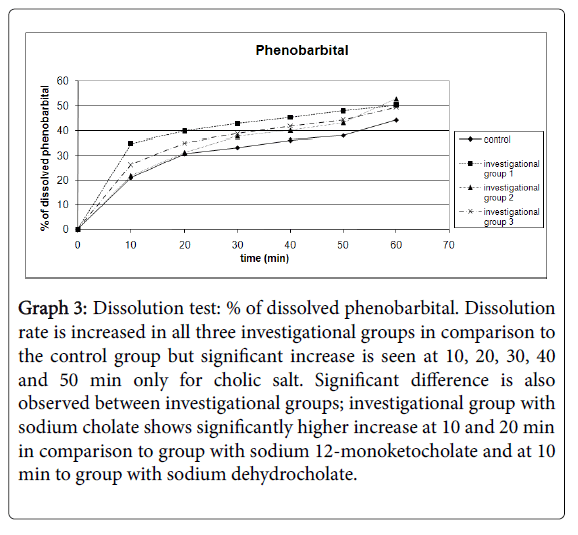 The results are very favourable and encouraging in case of dissolution enhancing. It has been demonstrated that dissolution rate is increased significantly for all three substances even though they differ in their physico-chemical properties: ranitidine hydrochloride is an acid salt, aminophylline is a weak base and phenobarbital is a weak acid. All of three investigational cholic salts have demonstrated positive effect on dissolution rate increase.

Ranitidine and aminophylline are both highly water-soluble, so the final dissolved concentration is approximately equal for all four groups and significant increase in dissolution rate is observed in the first 30 min only. In contrast, for phenobarbital that is poorly water-soluble, final dissolved concentration in all three investigational groups is higher than in the control group. Important observation is that bile salts have increased dissolution rate at low pH similar to gastric environment. BCS is an experimental model, centrally embracing permeability and solubility, with qualifications related to pH and dissolution. The objective of the BCS is to predict in vivo pharmacokinetic performance of drug products from measurements of permeability and solubility. A drug substance is considered highly soluble when the highest dose strength is soluble in 250 ml or less of aqueous media over a pH range of 1-7.5 at 37°C. A drug substance is considered to be highly permeable when the extent of absorption in humans is determined to be ≥90% of an administered dose based on a mass balance determination or in comparison to an intravenous reference dose [39]. According to BCS, substances that are classified in class II (low solubility-high permeability) and IV (low solubility-low permeability) have low solubility. Drugs whose rate of absorption is much faster than the dissolution rate are said to be dissolution limited because the rate of entry of the drug into the blood is limited by the dissolution process rather than the absorption process. Such drugs are of great interest in the pharmaceutical industry because the rate of dissolution is amenable to control by means of the formulation. In the case of dissolution-limited drugs there may be a relationship between the absorption in human subjects (in vivo) and the dissolution under laboratory conditions (in vitro). Therefore, observed property of bile acid salts to increase dissolution rate should be further investigated especially in dissolution limited drugs.

Bile acid salts are very promising excipients. This study confirmed their role as surfactants and lubricants.

This research was supported by Ministry of Education and Science, Republic of Serbia project no. III 41012.