Introduction: Bariatric procedures are widely spreading nowadays, laparoscopic sleeve gastrectomy is one of the most commonly performed Bariatric operations, post-operative bleeding is being a serious and a common event of this operation.
Materials and methods: A retrospective analysis was performed for 80 out of 1500 patients, who underwent laparoscopic sleeve gastrectomy (LSG) in the period between March 2015 and August 2017. The rate of hemorrhagic complications was 5.3%, the mean age was 38.5 (± 8.718349), and the mean BMI was 40 (± 3.780856)
Results: Source of bleeding was mostly intra-abdominal of which 95% of 76 patients, while intra-luminal bleeding represented only 5% of 4 patients. While in the intra-abdominal bleeding, 54 were there which had bleeding from the staple line, in 8 cases the bleeding was from the omentum, while 4 bled from the gastro-pancreatic adhesions, 4 bled from short gastric vessels, and in 6 patients the bleeding was from the trocar entry site.
Conclusion: Early re-laparoscopy after post-LSG bleeding is diagnostic and therapeutic, and decreases both morbidity and mortality of patients.

Postsurgical complications after sleeve gastrectomy can be divided into early and delayed. Hemorrhage is considered to be one of the most common early complications after sleeve gastrectomy [1]. Possible causes include lengthy staple line and the change in intra-gastric pressure. Another important risk factor for increased postoperative bleeding is preoperative low molecular weight heparins used for prevention of venous thromboembolism [2-4]. Chronic bleeding in LSG however is very uncommon and related to ulcers that may develop within the remnant stomach. Incidence of hemorrhage post LSG has been reported in 1.1–8.7% of cases [5]. Postoperative bleeding can be classified based on bleeding site into intra-luminal bleeding (ILB) into the gastrointestinal tract or intra-abdominal bleeding (IAB) into the abdominal cavity [6-8].Intraluminal bleeding from the staple line usually presents with an upper gastrointestinal bleed as hematemesis or later on melena stools, in addition to tachycardia and hypotension. Management of intraluminal bleeding was conservative [9]. Intra-abdominal hemorrhage presents in the abdominal cavity and early indication of intra-abdominal bleeding will be through the abdominal drain [10]. Intra-abdominal bleeding usually presents with a serial drop in serum hemoglobin levels and/or signs of tachycardia or hypotension. Common sources for intra-abdominal bleeding include the gastric staple line, spleen, liver or abdominal wall at the sites of trocar entry [9,11]. An increased risk of hematoma developing and abscess formation is found as a result. Early bleeding through drains or NG tube is called a sentinel bleed and it usually can occur within hours of surgery [12-15].

This is a retrospective analysis of 1500 morbidly obese patients who were collected from General Surgery Department at Ain Shams university hospitals (El-Demerdash hospital) [16].The patients underwent laparoscopic sleeve gastrectomy (LSG) in the period between march 2015 till August 2017. An aggregate of 80 patients out of the 1500 presented by post LSG bleeding within the first 6 hours. According to the clinical presentation , bleeding was classified into 2 groups: Group I: Intra-abdominal: this comprised 76 patients out of the 80. They presented with tachycardia (>100 b/m), hypotension (<90/60 mmHg), increase in the drainage volume (>100 cc/hr), and abdominal pain [17,18]. While 6 out of the 38 patients bled from the trocar insertion site. Group II: Intra-luminal bleeding: 4 patients out of the 80 patients presented with hematemesis and melena in addition to tachycardia and hypotension.

In these cases we initiated fluid resuscitation, performed laboratory tests (CBC and coagulation profile) and also pelvi-abdominal ultrasound examination if feasible [19]. Patients with poor response to fluid resuscitation were returned to operating room (OR) for urgent Re-laparoscopy to identify the source of bleeding.

Whereas 36 patients underwent urgent Re-laparoscopy to identify the source of bleeding. Diagnostic laparoscopy is considered to be an excellent option to allow direct visualization and to identify the bleeding source [8]. It also allows evacuation of the hematoma and a thorough washout to prevent formation of an abscess (Figure 1). After insertion of ports, thorough and meticulous exploration was done after evacuation of the hematoma. Intra-operative packing to help control bleeding and allow hemostasis. Packing can be done with inserting gauze to help to identify the bleeding source [20,21]. Suction and irrigation can also help us to identify the source of bleeding and allow for the application of a clip, cauterizing the bleeding points, or application of under-running sutures (Figure 2). Table 1: Independent variables according to gender.

This table shows that most of the patient were females as they represented 62.5%, while the male patients only 37.5% (Table 2).

Table 2: Independent Variables according to age and BMI. 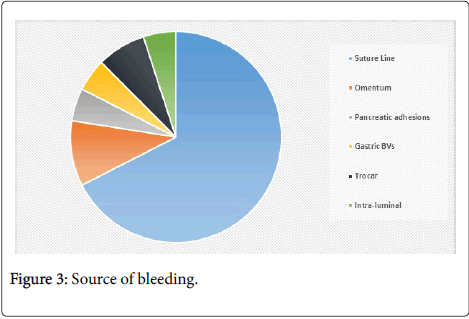 • 54 cases bled from the suture line.

• 6 patients had bleeding from the trocar site bleeding (to exclude other sources of bleeding).

• Bleeding from omentum was managed by cauterization and clipping of bleeding points and ligation of right gastro-epiploic vessels below the pylorus.

• Bleeding from gastro-pancreatic adhesions was managed by ligation and clipping of the bleeders.

• Bleeding from short gastric (upper polar) vessels was managed by ligation and clipping of the vessels.

• Bleeding from port site: 4 patients were managed conservatively by compression (using Elasto-plast) and 2 patient needed relaparoscopy to exclude other causes of bleeding, and the bleeding was controlled by widening of port site and cauterizing the bleeder (Figures 4 and 5). Patients usually bled from staple line, and they were managed conservatively using:

• Follow-up of hemoglobin and hematocrite.

Post-operative bleeding is certainly the most common and early complication. Usually it occurs during the first or second postoperative day. It was found that the most common and major early complication is certainly the post-operative bleeding, which can occur in up to 16% of patients, with reported average of 3.6% [22]. We found that our early intervention has decreased the hospital stay, decreased the risk of infection, decreased risk of blood transfusion, and speeded up the patient recovery and normal lifestyle comeback.

The age range was between 24-55 years with mean 41.2, this was agreed by Michael who found the same mean age. Our results also found that the female gender was more than the male gender, and that mean BMI>41 kg/m2 where it was 47.3 kg/m2.

In our study 80 patients out of the 1500 presented by post LSG acute bleeding within the first 6 hours. It was found that the postsurgical complications after sleeve gastrectomy can be divided into acute and chronic [23]. It was found that acute or early post-operative bleeding usually occur within 12-48 hours after surgical procedure [1]. It was showed that late and chronic bleeding will usually present more than 42 days after the procedure [9,17].

Early re-laparoscopy after post-LSG bleeding is diagnostic and therapeutic, and decreases both morbidity and mortality of patients.

No any type of conflict of interest or financial support.

An approval from all participants in the study was obtained.

Copyright: © 2017 Sabry K, et al. This is an open-access article distributed under the terms of the Creative Commons Attribution License, which permits unrestricted use, distribution, and reproduction in any medium, provided the original author and source are credited.