4Specialist in oral and maxillofacial surgery, Hospital of the Restoration, Recife, Brazil

5Associated teacher of Oral and Maxillofacial Surgery and Traumatology, Faculty of Dentistry of Pernambuco, Brazil

Copyright: © 2013 Queiroz IV, et al. This is an open-access article distributed under the terms of the Creative Commons Attribution License, which permits unrestricted use, distribution, and reproduction in any medium, provided the original author and source are credited.

Because of its intrinsic characteristics consistent with neoplasms, the odontogenic keratocyst has joined the group of benign odontogenic tumors in 2005 and renamed keratocystic odontogenic tumor (KOT). The main characteristics of this pathology include: aggressive behavior, autonomous growth, high recurrence rate and, sometimes, silent clinical manifestation of lesions to large size. These peculiarities, combined with their frequency, delay diagnosis, prognosis and limited treatment difficult. This study aims to present a case of atypical KOT emphasizing its solvability without surgical intervention or invasive procedures, and comparing its clinical, radiological and histopathological characteristics and therapeutic alternatives to those described in the literature. The most common treatment for KOT is enucleation followed by curettage, but its friable nature, associated with a fibrous connective tissue with thin, hinders its complete removal. In large lesions, it has been chosen by marsupialization followed by enucleation. The advantages of this technique are the thickness of the capsule, the reduction in lesion size and, therefore, easy and complete removal lower recurrence rate. Due to the characteristics of this injury, it deserves special attention, since successful treatment depends on accurate diagnosis, an appropriate surgical procedure and an appropriate and periodic radiographic preservation, in order to prevent the appearance of new lesions in the area.

The Keratocystic Odontogenic Tumor (KOT) has been recognized as a tumor by the World Health Organization (WHO) in 2005 because of its aggressive behavior, autonomous growth and potential for recurrence [1-21]. Radiographically, the KOT is a radiolucent lesion, with well-defined margins, usually unilocular, but when it expands over a greater area, it can be multilocular [1,3-5,8-11,14,16-18,20-23]. Occurs in people of various ages, predominantly between the second and third decades of life, and men are more affected than women [3,5,8,11,13-17,24]. Has a marked tendency to involve the posterior region and the ascending mandibular ramus, usually associated to an impacted tooth [3-6,9-11,14,16,17,20,22,25,26]. Compared to other odontogenic tumors, its prevalence is approximately 35.8%, second only to ameloblas¬toma, with 43.3% [27]. It is defined as an intraosseous benign tumor that derives from remnants of the dental lamina [1,6,16,17]. Such characteristics, associated to its frequency, lead to delayed diagnosis, limit prognosis and make it difficult to treat the disease [27].

Effective treatment depends on precise diagnosis, the selection of the most surgical procedure and appropriate preservation [28]. The most commonly used procedure is enucleation followed by curettage [3,4,6,7,10-12,24,27,29]. However, due to its friable nature, complete removal of the tumor is difficult [3,13,18,20,22,24,27]. In order to reduce recurrence rates, more aggressive treatments can be recommended, such as peripheral ostectomy, cryotherapy, Carnoy’s solution and, sometimes, segmental resection of the mandible [1,3,4,6,10,20-22,26,29-31]. In case of large cystic lesions, marsupialization followed by enucleation has been the preferred option [1,6,12,15,20-22,27,31].

The present study is aimed to present and discuss a KOT located in the region of the right mandible (angle, ramus, body) and recommending the use of marsupialization as the best nonsurgical management of the tumor, besides demonstrating its clinical evolution without recurrences up to the present moment.

A 27-year old female student, with increased skin pigmentation, was admitted in the oral and maxillofacial surgery service of Hospital da Restauracao, with a history of slight increase in the volume in the region of the right mandibular angle, asymptomatic, with an evolution of approximately 18 months.

No flogistic sign or alteration was detected at oral examination that might explain the condition. Cervical lymphadenopathy was not observed in physical examination. A panoramic radiograph was taken (Figure 1) of the patient’s maxillary arches where a well-defined radiolucent image was detected, with regular margins, measuring approximately 5 centimeters in its largest diameter, extending over the ramus, angle and body of the right mandible until the distal root of the element 46. 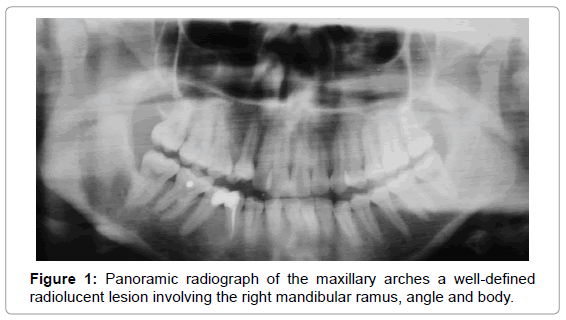 Figure 1: Title of the figure

Given the clinical and radiographic characteristics, the diagnostic hypothesis of keratocystic odontogenic tumor was suggested. However, some cystic lesions such as ameloblastoma, central giant cell lesion, aneurysmal bone cyst, as well as other radiolucent lesions cannot be discarded.

The patient was subjected to aspiration and incisional biopsy and concomitant marsupialization, with installation of the device of intraoral decompression under local anesthesia, in an outpatient setting. The patient was advised to perform periodic irrigation of the oral cavity with 0.9% saline wash twice a day during the treatment.

The histological sections reveal fragments of cystic capsule covered by odontogenic epithelium characterized by few layers, granulocytosis and overlying layers of ortho-keratin. Bleeding exudate was also reported. Based on the clinical and radiographic findings, and after histopathological confirmation, the definite diagnosis of KOT was established.

The follow-up was performed 7 days, 14 days , 30 days, 3 months, 6 months, 1 year, 2 years and 3 years after treatment, and the medical team expected the lesion size to be reduced, to make it possible to perform a less aggressive definite surgical procedure, and, thus, to preserve the involved structures as much as possible. However, in the referred follow-up period, a slightly radiolucent image (Figure 2) was recorded in the region of the right mandibular body, angle and ramus, resembling a bone. So, it has been assumed that lesion had receded completely, and there was no need for any other surgical procedure. Therefore, preservation and radiographic monitoring has been selected to provide early detection of possible recurrences.

The Keratocystic Odontogenic Tumor can be defined as an intraosseous benign tumor that due to its specific histopathological aspects requires special considerations [7,10,13,14,18,22,28].

Histologically, one of the most remarkable characteristics of the KOT is the high proliferative capacity of the epithelium, particularly in the suprabasal layer, which can be one of the possible explanations for its aggressive behavior and the potential for recurrence [3,7,9,20,21,27,29]. The growth pattern of the KOT is different from that of odontogenic cysts, since odontogenic cyst growth is related to the difference between the osmotic and hydrostatic pressure, whereas the KOT associates the pressure difference to the intense proliferation that is not dependent on its epithelial cells [2,30,32].

The present case was consistent with the pertinent literature and the only difference concerned the prevalence gender. In view of the clinical and radiographic characteristics observed, KOT was the main diagnostic hypothesis. However, other possibilities cannot be discarded. In the case of an isolated lesion (Figure 1) without the association of a tooth, the differential diagnosis could include traumatic bone cyst, lateral periodontal cyst, central giant cell lesion and non-odontogenic lesions such as intraosseous vascular, benign bone tumors and plasmacytomas [1,9,14,21]. Biopsy was performed, as recommended, and the clinical and radiographic diagnosis of KOT was confirmed.

In order to reduce the size of the lesion and preserve the involved structures, many authors recommend marsupialization [19,22,24,25,32]. This technique is routinely used prior to more radical surgical interventions. Described for the first time by Partsch, in 1892, marsupialization consists in making a drainage incision of approximately 1 cm, suturing the cut edges of the remaining wall to adjacent mucosa and performs daily irrigations. The procedure leads to decrease in lesion size and metaplasia of epithelial tumor in the oral mucosa. In protocols, the treatment is done alone or it’s completed with enucleation [2,12,18,24,29,31,32].

Treatment of KOT remains controversial and it can be conservative or aggressive [3,5,6,31]. To decrease the rate of recurrence, authors advocate radical resection and bone grafting for very large lesions. However, this kind of treatment is more aggressive and crippling, it has higher postoperative morbidity and increased risk of complications such as infection and neurovascular injury, besides causing aesthetics and functional damages that, especially among young patients, could give the patient a poor quality of life [3,6]. Most authors have shown the successful treatment of large KOTs using the technique of marsupialization. The benefits of this protocol is minimal surgical morbidity, preservation of bone and teeth associated with the lesion and important neighboring structures are less vulnerable to damage [3,5,6,31].

Patient cooperation and professional follow-up are essential for the success of the referred procedure, which may have the advantages of no need to reduce the length of cannula, the reduction in lesion size, which makes it easier to promote complete tumor removal with a lower recurrence rate. However, it presents some advantages such as the need for two interventions and the maintenance of the cannula, as well as regular irrigation of the area for several months [12,13,22,24,29,31].

In a study conducted by Pogrel and Jordan in 2004 [30], 10 cases of KOT were treated exclusively with marsupialization. The lesion was completely resolved, clinically and radiographically, in all patients, within a period of 7 to 19 months. The histology of the material obtained after marsupialization showed a normal epithelium. Vertical displacement and occlusion of the teeth involved by this cystic lesion may occur. Also according to these authors, KOT response to marsupialization seems to be more predictable and faster than that of other odontogenic lesions.

In the present case, exclusive marsupialization was the definite treatment, and complete resolution was obtained after a strict 3-year follow-up period, without the need for a more radical intervention. Despite the reported recurrence rate, there was no recurrence sign in the present case.

The KOT has some peculiarities such as the friable nature of the capsule and the epithelium, high proliferative activity, aggressive behavior and high recurrence rates. Therefore, it deserves special attention, once early and precise diagnosis is the basis for the success of any therapy.

As for the treatment, marsupialization must be performed in case of large cystic lesions, in order to reduce tumor volume and recurrence rates. However, patient adherence to periodic radiographic follow-up is essential to therapeutic success.