On the Physical Sense of and#948;13C Values of Carbonate and Organic Matter of Sedimentary Rocks | OMICS International

Copyright: © 2017 Ivlev AA. This is an open-access article distributed under the terms of the Creative Commons Attribution License, which permits unrestricted use, distribution, and reproduction in any medium, provided the original author and source are credited.

Carbon isotope composition (δ13Ð¡) of carbonates and organic matter in sedimentary rocks is the most commonly used parameter in geological, paleontological, paleoclimatic and other studies of the history of the Earth. The difference of them ε=(δ13Corg.matter - δ13Ccarb) has the meaning of 13C discrimination in photosynthesis in the past [1], but only in the cases where samples of organic matter and carbonates are coeval and taken from the same facies. Often in organic matter studies the changes its carbon isotope composition are interpreted as if they were the results of 13C isotope discrimination in the past photosynthesis [2,3]. It should be emphasized that we focus on the global photosynthesis that has many features typical to ordinary photosynthesizing organisms [1].

All photosynthesizing protobionts prior to photorespiration appearance had the only function – to assimilate carbon dioxide. This function was followed by carbon isotope effect resulting in 12C enrichment of biomass. That is why the organic carbon of the ancient sedimentary rocks was unusually “light” [4]. In the course of photosynthesis evolution with the accumulation of O2 in the atmosphere photorespiration has appeared and photosynthesis began to include both processes. They were accompanied with carbon isotope fractionation having opposite signs. Such organisms belong to C-3 type and were dominant until Miocene when a decrease of CO2 concentration in the ‘atmosphere – hydrosphere” system led to emergence of organisms of C-4 type with different pathway of CO2 assimilation [5], which was followed by different carbon isotope effect.

Let’s examine the factors influencing δ13C isotope discrimination in photosynthesis to understand how Δ13C discrimination varied in the past and what’s the sense has the difference of carbon isotope composition of carbonates and organic carbon.

Figure 1 illustrates the way how CO2/O2 concentration ratio affects the carbon isotope composition of biomass of C-3 organisms. Carbon dioxide enters the cell and fixed by RuBP acceptor is involved into Calvin cycle. The fixation is followed by carbon isotope effect resulting in 12C enrichment of the assimilated carbon. Then a part of this pool is used to provide glycolate cycle, where photorespiration occurs. In glycine dehydrogenase reaction of the cycle a part of the carbon flow is subjected to oxidative decarboxylation and is evolved from the cell. The other part of the carbon flow is used for photo respiratory pool creation. Carbon isotope effect arising in the above reaction results in 13C enrichment of the pool. Thus, carbon assimilatory pool is enriched in 12C and carbon of photo respiratory pool is enriched in 13C. Both make the total biomass. The contribution of each pool to biomass determines its carbon isotope composition and depends on CO2/O2 concentration ratio in the environment. 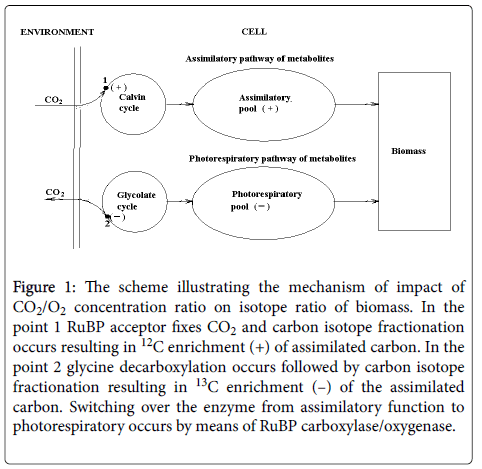 Figure 1: The scheme illustrating the mechanism of impact of CO2/O2 concentration ratio on isotope ratio of biomass. In the point 1 RuBP acceptor fixes CO2 and carbon isotope fractionation occurs resulting in 12C enrichment (+) of assimilated carbon. In the point 2 glycine decarboxylation occurs followed by carbon isotope fractionation resulting in 13C enrichment (–) of the assimilated carbon. Switching over the enzyme from assimilatory function to photorespiratory occurs by means of RuBP carboxylase/oxygenase.

In the accordance with the suggested oscillatory mechanism of photosynthesis [6], the alternation of assimilation and photorespiration is controlled by the switching of enzyme RuBP carboxylase/oxygenase from carboxylase to oxygenase function and back depending on the CO2/O2 ratio in the cell. The latter, in turn, depends on the ratio in the environment. Thus, carbon isotope composition of total biomass is a function of CO2/O2 ratio. We believe that oscillatory mechanism of photosynthesis is typical to photosynthesis of C-3 type organisms at present and in the past.

Now we can explain what the facial isotopic differences are, and how they arise. There are two possible causes for their existence. The first is the differences inherited from “living matter”. They are approximately 20% and mainly determined be the ratio of carboxylase and oxygenase phases. The second is the result of incomplete oxidation of the “living matter” in sediment. The thing is that “living matter” consists of different fraction having different isotope composition. Isotope heterogeneity is a result of intracellular carbon isotope fractionation. Because of different resistance of the fraction to oxidation their ratio changes what leads to the change in carbon isotope composition of organic matter.

Lipids is the most enriched in 12C fraction of biomass, while protein-carbohydrate fraction at 6% “heavier”. Moreover lipids are more stable fraction than others. It is evident that post-burial oxidative transformation will bring about 12C enrichment of organic matter but it can hardly give any essential shift to the facial differences, as the scale of influence of the photosynthesis conditions is much more than intracellular heterogeneity.

It allows me concluding that natural facial carbon isotopic differences are mainly reflect photosynthesis conditions, which is transmitted from “living matter” through post-burial transformations to organic matter. The photosynthesis conditions on the Earth are under the control of the environmental parameter, such as water salinity, illumination, temperature, water availability, etc., that affect the time of carboxylase and oxygenase phases. Different locations on the Earth characterized by a variety of environmental factors make a set of facial setting different in carbon isotope composition of sedimentary organic matter.

Note, that the highest CO2/O2 concentration ratio raised at the beginning of the cycle, when “atmosphere – hydrosphere” system is filled with Ð¡Ðž2, derived in oxidation of sedimentary organic matter in subduction zone, whereas the lowest CO2/O2 ratio was achieved by the end of the cycle [8]. In the course of Orogenic cycle the CO2/O2 ratio decreases, i.e. O2 concentration increases, causing strengthening of photorespiration and the corresponding 13C enrichment of sedimentary organic matter. Note, that average O2 concentration grows up from cycle to cycle the until the ecological compensation point will be achieved.

In conclusion it should be relate to the following question, how to distinguish facial isotopic differences from temporal, namely from the differences associated with Orogenic cycles and following after them climatic oscillations.

The isotopic differences related to Orogenic cycles and climatic oscillations are characterized by abrupt changes of isotopic and many other non-isotopic characteristics associated with the transitions from one cycle to another (the transition from glacial period in the end of the cycle to “greenhouse” period at the beginning of the next cycle [8]). Besides, the changes of most characteristics are synchronous and correlate with each other. For facial isotopic differences smooth variations in transition from one location to another are typical.

The facial isotopic differences are observed within a given location and smoothly vary from one location to another. They exist constantly varying with changing external conditions.

The isotopic differences related to Orogenic cycles are manifested all over the planet; they are particularly sharp in the transitions between the cycles. Climatic oscillations are manifested in the limits of the region where they appear.