Background and aims: In recent years the number of patients with inflammatory bowel diseases such as Crohn’s disease and ulcerative colitis has been on the rise. Neutrophils are thought to be first cells to colonize disease-state colon tissue. Neutrophil elastase (NE) and cathepsin-G (Cat-G) are major secretory products from activated neutrophils and a major contributor to tissue destruction in inflammatory diseases. We predicted that inhibiting neutrophils and their proteases would improve ulcerative colitis.
Methods: Acute colitis was induced in mice by oral administration of 2% DSS for 7 days. In the first experiment, an inhibitor of Gr-1, a key neutrophil protein, was administered. In the second, the respective antagonists for NE and Cat-G, proteinases secreted by neutrophils, were administered, and the conditions of DSS-induced colitis were evaluated for improvement. Blood samples were collected and analyzed for levels of cytokines.
Results: The survival rate and pathology were improved in the Gr-1 inhibition experiments. In addition, administration of inhibitors of NE and Cat-G also resulted in clinical improvement. However, elevation of TNF-α, a key cytokine, was not suppressed in either experiment.
Conclusion: The proteolytic environment of neutrophils is associated with colonic inflammation. Disruption of the neutrophil proteases NE and Cat-G might therefore be a strategy for treatment of colitis regardless of TNF-α suppression.

Crohn’s disease (CD) and ulcerative colitis (UC) are the major forms of chronic inflammatory bowel disease (IBD) involving chronic intestinal inflammation. IBD is caused by the interplay of many factors including genetic susceptibility, the external environment, infectious agents, the commensal enteric flora and immune system dysfunction [1,2]. While recent studies have focused mainly on lymphocytes or antigen-presenting cells such as dendritic cells, little is known about the pathogenic role of neutrophils in UC. Neutrophils are not only important in acute inflammatory reactions by early recruitment, but might also be initiators of a second wave of mononuclear cells which are drawn to tissues by neutrophils’ granule proteins [3]. Neutrophil granule components including antimicrobial polypeptides (e.g. LL-37, azurocidin, and human neutrophil peptide) and proteases (e.g. neutrophil elastase [NE], cathepsin G [Cat-G], matrix metalloproteinases-9 [MMP9], and proteinase-3) enhance the immune response [3]. Following migration to inflammatory tissues, neutrophils undergo a burst of transcriptional activity that results in the release of inflammatory cytokines (e.g. tumor necrosis factor-α [TNF-α], interleukin [IL]-1a and b) and chemokines (e.g. monocyte chemotactic protein-1, IL- 8) [3]. We have already shown that inhibition of MMP9 can prevent TNF-α release in mice [4]. Morohoshi et al. showed that an NE-specific inhibitor ameliorated progression of a UC murine model [5]. In addition, NE activated MMP9 in an in vivo model of acute lung injury [6]. N-terminal cleavage of the human neutrophil chemoattractant IL-8 by NE, Cat-G and proteinase-3 releases truncated forms of these chemokines having higher chemotactic activity than the full-length molecules [7]. Thus, these proteolytic environments not only damage inflammatory tissues, but also release pro-inflammatory cytokines and chemokines known to promote the influx of mononuclear cells. Clinically, the efficacy of granulocyte adsorption apheresis therapy to remove granular leukocytes secreted by neutrophils has been reported in active UC patients. Granulocyteadsorptive apheresis therapy induces remission stage, especially in patients with steroid-refractory and steroid-dependent moderate-tosevere UC [8]. Therapeutic drugs for ulcerative colitis have shown remarkable progress in recent years. One of the remarkable new drugs inside is infliximab, which is TNF-α depressant drug. TNF-α is mainly produced by macrophages and T cells. Although anti-TNF-α agents have significantly increased the treatment options for patients with refractory IBD, TNF-α antibody therapy is only effective for 76% of patients [9,10]. In the present study, we focused on inflammatory proteinases secreted by neutrophils rather than macrophages and Tcell- related cytokines. We show that pharmacological inhibition of neutrophils and their proteases prevents progression of IBD in an experimental model of colitis.

C57BL/6 mice were purchased from SLC, Shizuoka, Japan. The mice were housed under specific pathogen-free conditions. Animal studies were approved by the Animal Review Board of Juntendo University (Tokyo, JAPAN).

Colon sections were stained with H&E. Histological scoring was performed as described by Cooper et al. [11].

Neutrophils, macrophages and T cells are associated with DSS-induced enterocolitis

Using a DSS-induced colitis model, we first examined whether neutrophils accumulate in the colon tissues. Induction of neutrophils was found in inflammatory intestinal epithelia compared to the control group (Figure 1A). Similar to neutrophils, we found that T-cells and macrophages were associated with inflammation (Figure 1A). Gr-1 Ab was used to assess the depletion of neutrophils. Inhibition of the Gr-1 Ab group improved the survival rate by inhibiting neutrophils in the UC model mice (Figure 1B). Colon sections of mice given Gr-1 inhibitor showed less severe mucosal damage, loss of goblet cells, and inflammatory cell infiltration as evaluated by histological score (Figure 1C). Gr-1 cells in bone marrow were destroyed by Gr-1 Ab (Figure 1D). These data suggest that neutrophils are important inflammatory cells and therapeutic targets during colon inflammation. NE and Cat-G are representative proteinases engaged in inflammation. In addition to its protease activity contributing to tissue destruction, it has been reported that NE enhances the migration and adhesion of neutrophils [5]. ONO-5046 has already been clinically used for the treatment of acute respiratory distress syndrome, and no serious adverse effects have been reported. Similarly, Kuwana et al. showed that anti-cathepsin-G antibodies were detected in 40.6% of patients with active UC, and that their prevalence was significantly higher in patients with severe colitis [12]. We investigated whether NE and Cat-G play important roles in DSS-induced colitis by pharmacological inhibition. Elastase inhibition by ONO-5046 treatment protected against DSS-induced colitis-associated lethality and prevented shortening of the colon (Figures 2A and 2B). The shortening of colon length reflects the extent of colon damage of acute DSS-induced colitis. The UC model mice administered ONO showed reduced histological inflammation (Figure 2C). Repeated administration of the Cat-G inhibitor attenuated the severity of DSSinduced colitis, as reflected in survival, colon length and pathological score (Figures 3A-3C). We next examined a typical IBD-associated cytokine in DSSinduced colitis. The pro-inflammatory cytokine TNF-α has been recognized to play a central role in mediating this immune response. However, increase of serum TNF-α was not disrupted by administration of NE and Cat-G inhibitors (Figure 4A and 4B). These data indicate that neutrophil serine proteases are not related to TNF-α suppression. 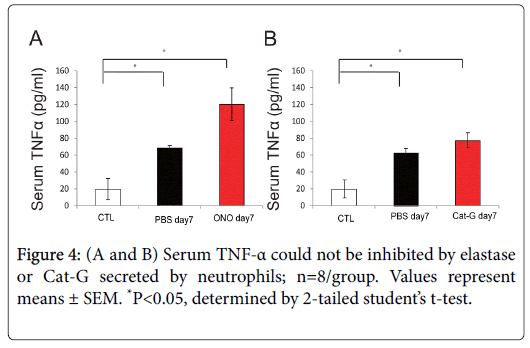 Figure 4: (A and B) Serum TNF-α could not be inhibited by elastase or Cat-G secreted by neutrophils; n=8/group. Values represent means ± SEM. *P<0.05, determined by 2-tailed student’s t-test.

In this study, we provide functional evidence that neutrophil-related protease inhibition prevented progression of DSS-induced colitis, independent of TNF-α. Our findings are summarized in Figure 5. Figure 5: Neutrophils, macrophages and T cells are associated with enterocolitis induced by DSS. The major inflammatory cytokine TNF-α is mainly produced by macrophages and T cells. Neutrophils are involved in the clinical condition of the ulcerative colitis model. Although clinical symptoms are improved with the administration of neutrophil inhibitor and inhibitors of its proteinases, elevated TNF-α was not suppressed in any of these trials.

Neutrophils are the first cells to arrive at sites of inflammation, and Hall et al. found that from as early as 1 day post-DSS administration the number of neutrophils was significantly increased in morphometry analysis [13]. Neutrophils release their serine proteases to the extracellular environment where they can then do the following: 1) proteolytically modify chemokine activity by releasing CXCchemokine ligand (CXCL) 2; 2) activate and inactivate cytokines CXCL8 and Monocyte chemotactic protein-1; 3) activate specific receptors such as myeloid differentiation primary-response gene 88 and clear translocation of nuclear factor-κB; and 4) potentially participate in neutrophil migration by cleaving adhesion molecules. Neutrophil serine proteases have been shown to interact with several cell-surface adhesion molecules such as intercellular adhesion molecule 1, vascular cell-adhesion molecule 1 and epithelial-cadherin [14].

As far as the NE inhibitor, ONO-5046, it is a selective inhibitor of neutrophil elastase developed and marketed for acute lung injury. In the pathogenesis of acute lung injury, hypercytokinemia can develop, in which neutrophils are activated to accumulate in the lungs and release NE. The NE injures pulmonary vascular endothelial cells and alveolar epithelial cells, causing increased pulmonary vascular permeability. ONO-5046 improves acute lung injury by selectively inhibiting NE [15]. Moreover, we confirmed that ONO-5046 overcame the role of MMP9, but NE was not present on the upstream protease of MMP9 (data not shown). However, as Morohoshi et al. have shown, ONO-5046 might actually have the potential to be a new therapeutic approach for patients with active UC [5].

On the other hand, Cat-G also induced the conversion of proMMP-1 to active MMP-1 in photoaging in hairless mice [16]. Another Cat-G inhibitor was shown to reduce neutrophil influx into sites of inflammation and counteract asthma pathophysiology [17]. We likewise demonstrated that a Cat-G inhibitor ameliorated the DSSinduced inflammation. In addition, NE- and Cat-G-deficient mice showed a decreased response in a rheumatoid arthritis model. This defect was accompanied by a decrease in local production of TNF-α and IL-1β [18]. It is generally accepted that the mTNF-α/sTNF-α ratio is regulated mainly through shedding of cytokines from the cell surface by activated ADAM17. Other proteases present at inflammatory sites, such as Cat-G and NE, may also contribute to TNF-α shedding [19]. Though TNF-α of our colitis model could not be regulated by inhibition of Cat-G and NE, This phenomenon is considered to depend on the particular disease.

In actual clinical trials, while mild cases of IBD may respond to aminosalicylates for induction and maintenance of remission, for management of severe IBD the current situation is far from satisfactory, especially in cases of steroid-dependent or steroidrefractory IBD, or in patients who are intolerant to corticosteroids. The widespread use of anti-TNF-α agents has changed the treatment paradigm in the management of patients with IBD [20]. These therapies are associated with a higher rate of induction of remission, but agents usually reserved for more severe disease have been known to fail in approximately 40% of patients [9,10]. Thus, new target therapy is required such as anti-integrin therapy or inhibition of proinflammatory cytokines such as IL13, IL-17, and IL12/23p40 [9,21,22] in humans but also, for instance, plasmin inhibitor, MMP inhibitor, cannabinoids and palmitoylethanolamide in mice [4,23,24]. In conclusion, our data suggest that serine proteases are activated during colitis progression. This proteolytic environment controls cell infiltration into colonic tissues, but not the production and secretion of the proinflammatory cytokine TNF-α. Our findings suggest that the targeting of NE and Cat-G is an attractive therapeutic candidate for TNF-α Abs-refractory IBD.

This work was supported in part by grants from the Japan Society for the Promotion of Science (Wakate B grant no. 16K19956 and 15H06603).

Copyright: © 2018 Ro H, et al. This is an open-access article distributed under the terms of the Creative Commons Attribution License, which permits unrestricted use, distribution, and reproduction in any medium, provided the original author and source are credited.