Phenomena of Street Children Life in Juba, the Capital of South Sudan, a Problem Attributed to Long Civil War in Sudan

Copyright: © 2015 poni-Gore R, et al. This is an open-access article distributed under the terms of the Creative Commons Attribution License, which permits unrestricted use, distribution, and reproduction in any medium, provided the original author and source are credited.

Introduction: In the recent years Juba the capital of South Sudan has been experiencing the problem of street children, a problem attributed to long civil war in the Sudan, current economic crisis and the current political conflict which started on 15th December 2013. According to UNICEF(Sweitzland 1983), a street child is “ Any girl or boy who has not reached adulthood for whom the street has become her or his habitual abode or source of livelihood and who is inadequately protected ,supervised or directed by irresponsible adult.”
Methodology: The study took place in Juba city in the five major markets namely, Konyo konyo, Juba, Jebel, Custom and Munuki. It targeted children within the age of 6-17 years of age. The study was done by cross sectional design. The methods of data collection were questionnaires and interviews. The sample size was 120 and the data was analyzed by Excel program. Results: The findings were 55% were within the age of 10-14, 70% were boys,41.7% had both parents alive, 40% hadfamilies comprising of 6-10 members, 38.3% do minor business, 55.8% come from urban area, 54.2% sleep at home , 28.3% earn living by selling wares, 37.5% obtained food by buying, 30.8% used their money on family expense, 40% of them were School drop outs, 23.3% sniff glue, 59.2% go to the public hospital for treatment, 56.7% do not have knowledge about HIV/AIDS, 30% of the street children felt that the public do not like them, 43.3% of the street children said their life on the street was tough,44.2% of the street children were responsible for themselves and47.5% of the street children were on the street in search for employment.
Limitations: The study was faced with limitations such as consent.
Conclusion: Majority of the street children are male within the age of 10-14 years and originally from urban areas, with extended families of low socio-economic status. The highest percentages of the children go to the street for employment purpose, followed by parental loss, child abuse, strict regulations at home and commitment of offence. They survive by engaging in works such as selling wares, shoe shining, collecting rubbish, collecting empty battles for re-use by local beverage makers, washing cars, and others beg or steal, They face a lot of problems such as drop out from school, drugs abuse, feeding themselves by left over from restaurants and some sleep hungry, they experience inhuman treatment such as torture, rape and arrest by police. The government in collaboration with NGOs should create employment opportunities to the people, establish enough rehabilitation and correction centres, schools and health centres, campaign for the rights of street children rights, commemorate ‘Street children’s Day’(January 31st ) and empower street children by providing outreach education, training, food and health services.

Juba City the Capital of south Sudan is experiencing the problem of street children, attributed to the long civil war in Sudan as a result of political, religious, social, economic problems. The war started in 1983 and ended with the signing of the Comprehensive Peace Agreement (CPA) in 2005 [1-4], in which about two million lives were lost as a result of war, famine, and diseases caused by the conflict and four million people were displaced, emerged families with single or no parents, and children were left in the street

The phenomenon of street children has been documented as far back as 1848 [5]. Orphaned and abandoned children have been a source of misery from earliest times. The typical age of a street child varies from place to place. In developing countries children as young as eight live completely on their own. In developed countries, street children are usually over the age of twelve. There are cultural differences to this phenomenon. The proportion of girls among street children is reported to be less than 30% in developing countries and about 50% in many developed countries. Most studies show a predominance of the male sex within the population [6-9]. The most common claim for finding fewer girls in the streets has been that they are taken off the streets to become prostitutes [9-11]. A more plausible reason for the gender difference is that because girls are needed in the household, they never get to the streets. Many street children come from femaleheaded homes in which boys are socialized into leaving home much earlier than western middle-class sensibilities deem appropriate and in which girls are encouraged to stay home far longer than is typical in the developed world [12].

Another factor-one less considered and more subtle-is the dynamics that go on between stepfathers and male stepchildren. This is a common situation and might At this point, it can be said that street children are of both genders although they are far more likely to be male in the developing world [13-15].

Justification and objective: To collect and gather information about the street children in Juba/South Sudan and enable the policy makers and well-wishers to set a strategy aimed at promoting and protecting the Child rights [15-17].

Selection of sample and sample size

Initially observational study was done by conducting field visits, to areas that are crowded by the street children and mapped out. The study targeted 120 children form street, who randomly selected from five market areas, about 20 children from each market [18,19]. The street children were interviewed, and they referred their friends for interview

The data collectors were deployed in the areas identified as gathering side of street children. The major instrument for investigation used in this research is interview using questionnaires [20-22].

The information obtain is coded and analyzed, through a computer excel program and statistical package for social scientist 8.0(spss8.0) [23-26] for frequency distribution, cross- tabulation and other factors analyzed.

All the respondents were informed about the purpose of the study and their verbal consent was obtained. They were assured that the interview was anonymous.

From the data we gathered from the street children through questionnaire and interview, the following results were obtained. Some of the emotions that street children desire and their withdrawl symptoms from substance abuse are depicted in the Tables 1.1 and 1.2 respectively.

Table 1.1: Some affects that street children may desire.

In Figure 1, the majority, 66 (55%) were under the age of 10-14 years followed by 34 (28.3%) under the age of 15-17 years and finally 20 (16.7%) under the age of 6-9 years. The high percentage of that age group indicates that these children can cope up with the street life, while the declining number with increase in the age could be due to their involvement in profitable economic activities which make them self-reliance and live in their own homes as shown in Table 2.1. 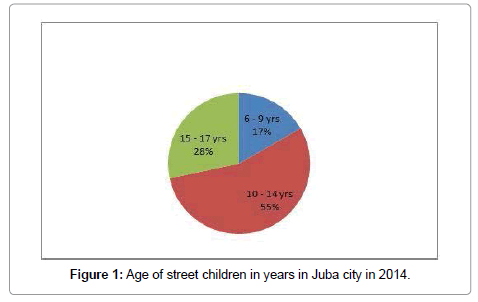 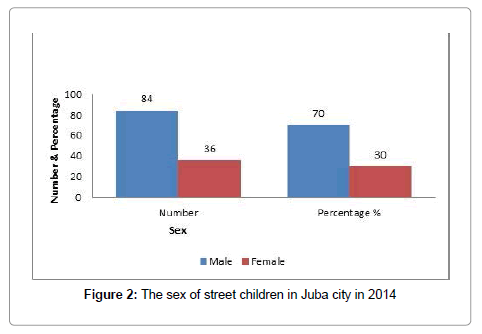 Figure 2: The sex of street children in Juba city in 2014

This low percentage of the street girls is due to their preference to endure difficulties of life at home than on the street, because they are much more vulnerable to rape, and other forms of assault and exploitation compared to the boys. Secondly, as they grow up most of them leave the street and get involved in prostitution or early marriage and profitable work.

Table 2.3: Parental status of street children in Juba city in 2014. 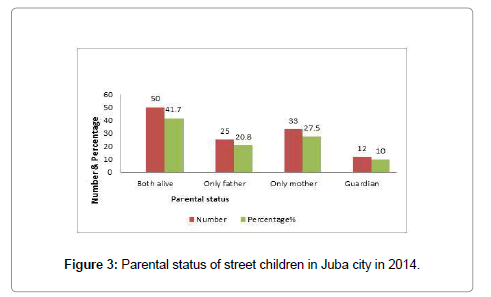 Figure 3: Parental status of street children in Juba city in 2014. 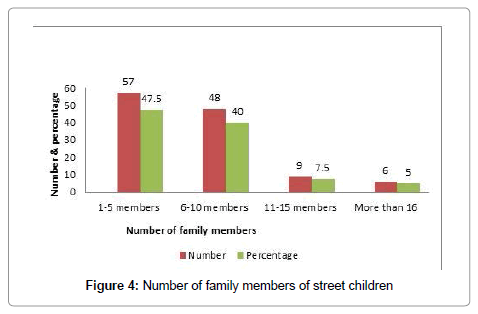 Table 2.5: Work done by parents of the street children. 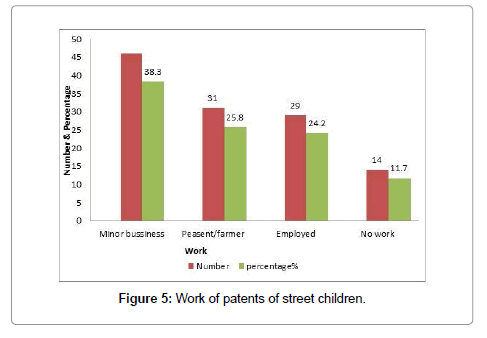 Table 2.6: The areas where the street children come from. 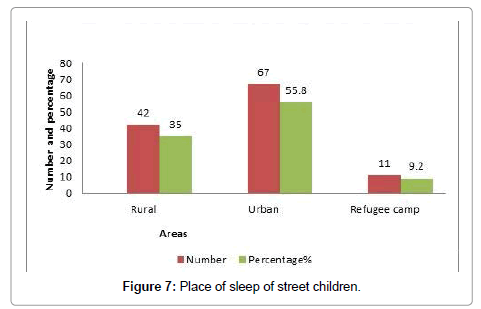 The economic activities of the street children

Table 2.8: Ways of the street children earning their living. 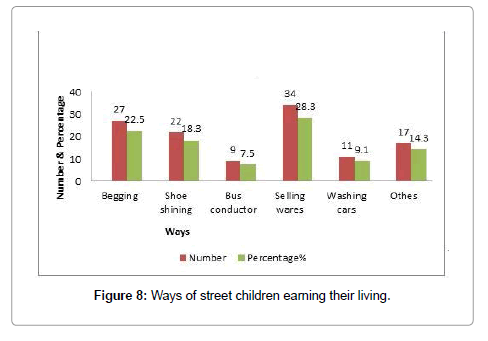 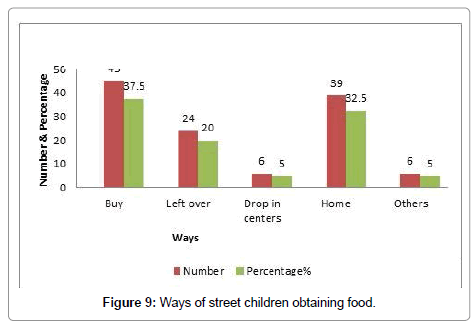 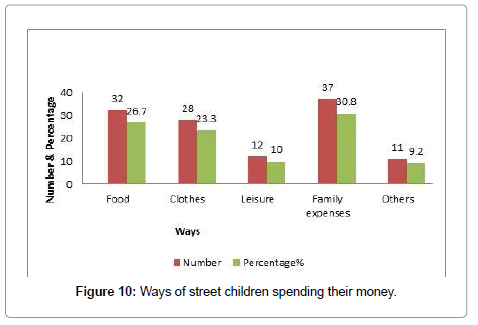 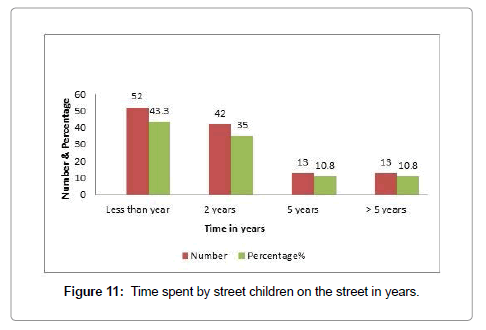 Figure 11: Time spent by street children on the street in years. 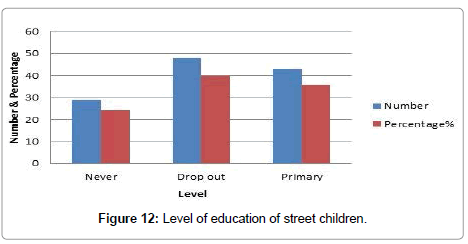 The above Figure 13 shows that 6(5%) of the street children take alcohol, 7(5.8%) smoke cigarattes, 28(23.3%) sniff glue, 5(4.2%) abuse other drugs while 61(50.7%) do not abuse drugs. a good percentage (49.3%) do abuse substances, as a way of forgetting their miseries, easing their pain, finding pleasure on the street and giving them braveness to engage in risky economic activities like stealing clearly mentioned in Table 2.13. Glue sniffing is most common because it is affordable for them. 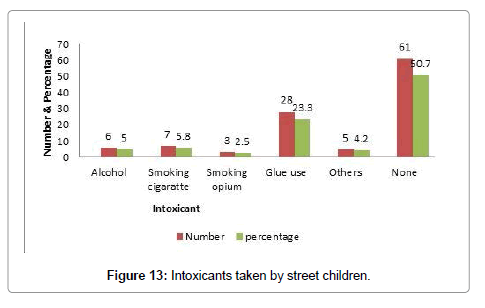 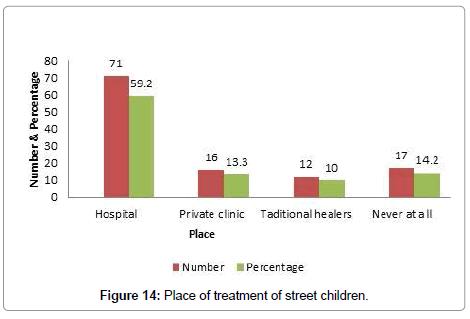 The Figure 15 and Table 2.15 indicates that 52(43.3%) of the street children have knowledge about HIV/AIDS prevention while 68(56.7%) do not have. Most street children are ignorant about health issues. They don’t know how to prevent HIV/AIDS. This can be explained by the fact that most of them are uneducated and nobody reaches them with such information as they are generally neglected. Therefore street children are prone to all sorts of diseases. 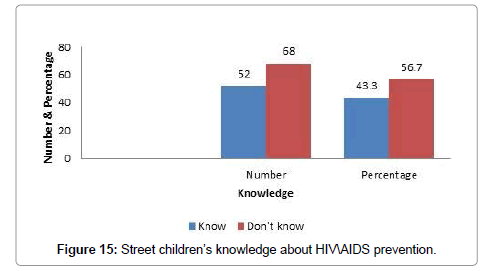 Day to day life on the street 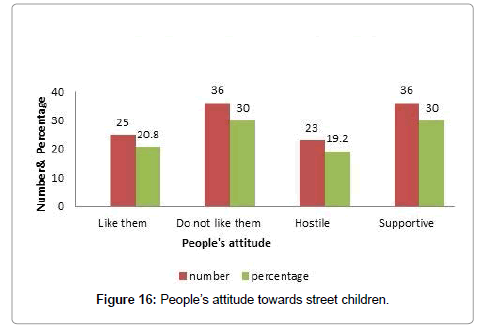 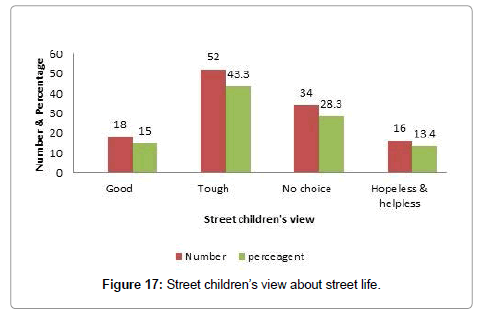 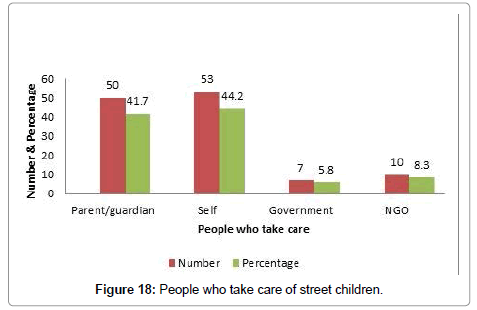 Table 2.19: Reasons for children being on the street. 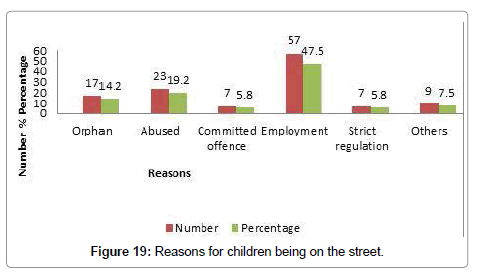 Figure 19: Reasons for children being on the street.

Majority of the street children are male within the age of 10-14 years and originally from urban areas, with extended families of low socio-economic status.

The highest percentages of the children go to the street for employment purpose, followed by parental loss, child abuse, strict regulations at home and commitment of offence. They survive by engaging in works such as selling wares, shoe shining, collecting rubbish, collecting empty battles for re-use by local beverage makers, washing cars, and others beg or steal, They face a lot of problems such as drop out from school, drugs abuse, feeding themselves by left over from restaurants and some sleep hungry, they experience inhuman treatment such as torture, rape and arrest by police. 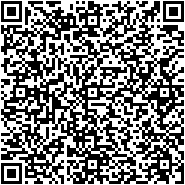