Copyright: © 2016 Ahmed LI, et al. This is an open-access article distributed under the terms of the Creative Commons Attribution License, which permits unrestricted use, distribution, and reproduction in any medium, provided the original author and source are credited.

Background: Temporomandibular disorders (TMDs) are a group of conditions affecting the temporomandibular joint (TMJ), the muscles of mastication and/or associated structures. TMD is a multi-factorial disorder, commonly associated with dental, medical and mental conditions. The aim of the study was to determine the prevalence of TMD symptoms among university students. Materials and

Results: Clicking was found to be the most prevalent symptom followed by tenderness, whereas limitation and deviation of the temporomandibular joint (TMJ) was the least prevalent. Students that live with their families and those who live under stressful conditions were more affected by temporomandibular disorder (TMD).

Conclusion: The prevalence of TMD among Sudanese university students was high, clicking was found to be the most common symptom. The results are frightening and require further more comprehensive studies to recognize the risk factors associated with TMD in order to ascertain procedures for anticipation and treatment.

Temporomandibular disorders (TMDs) are a group of conditions affecting the temporomandibular joint (TMJ), the muscles of mastication and/or associated structures [1]. The temporomandibular joint connects the mandible to the temporal bone. It can be felt by placing the finger just in front of the ear and open the mouth, as joints are mobile, the jaw can move smoothly up and down and side to side, facilitate the individual to talk, chew and yawn. Muscles attached to and surrounding the jaw joint controls its position and movement [2].

Disorders of the jaw joint and chewing may be a functional pain characterizes of; discomfort or pain in the muscles that control jaw function, Internal derangement of the joint which involves a displaced disc, dislocated jaw, or injury to the condyle. Arthritis refers to a group of degenerative/inflammatory joint disorders that can affect the temporomandibular joint [2].

TMD is a multi-factorial disorder, commonly associated with dental, medical and mental conditions such as posture, parafunctional habits, restorations, orth odontic treatment, emotional stress, trauma, and anatomy of the disk, path-physiology of the muscles, genetic and psychosocial factors (especially stress), in addition to age, and gender. It is not clear whether these factors are considered predispos ing or just concurrent factors [3].

In physical examination for temporomandibular disorders, measurement and recording of mandibular movements should be completed for opening, and lateral protrusive movements [4]. The quality and symmetry of jaw movement should be noted and diagrammed. TMD can affect any patient regardless of age including children, [5] or gender with varying signs and symptoms due to the variation of symptoms the diagnosis may be difficult [1,6].

The association between TMD and psychosocial factors (e.g. stress) has also been widely reported. Numer ous studies suggest that psychosocial factors, including stress, depression and anxiety, play some role in the pre disposition, initiation, and progression of TMD and in the responses of TMD patients to treatment, [7,8] other study reported that the prevalence of TMD-related symptoms was higher (approximately 17%-18%) among the working population than the general population (5%-12%), and concluded that this difference was attributable to psychological aggravation resulting from duties in the work-place, changes in the work environment, inter-per sonal relations, and an achievement oriented climate [9].

To our knowledge no such study available among Sudanese population. Therefore, the present study aimed to examine the prevalence of temporomandibular dysfunction in healthy university students not received or on active orthodontic treatment and to develop a Sudanese reference material to be used for comparison with other studies. Furthermore the intension was to investigate if there association between TMD and other contributing variables.

The sample size of the students was calculated according to the formula below:

p= proportion in target population estimated to have a particular characteristic (0.5)

d= degree of accuracy or the accepted margin of error (0.05)

Therefore the sample size will be:

The target population was increased to 500 in order to increase reliability and accuracy of the results. An equal number of males and females were selected to allow thorough and ample comparison since the ratio of females to males in the university is high. A list of the attending university students was obtained for each faculty year and students were randomly selected. This study only took into account Sudanese male or female students, agreed to participate in the study. It excluded the students who refused to participate and students who were absent on the day of examination. The study aims was explained to the university students and informed that this research was confidential.

A sample of 500 (251 male and 249 female) university students was carried out on this cross-sectional study, the age of the students range between 17-25 years old. The questionnaire was composed and distributed to the selected students. The completed questionnaire contained the following items regarding the different symptoms of TMD, and the possible risk factors:

•Do you hear joint sounds?

•Do you have limitation in mouth opening?

•Do you have pain in or about the ears?

•Have you ever had joint locking? If yes, how many times?

•Do you have pain on chewing?

•Have you ever had trauma to head and neck area? If yes, how many times?

•Do you have stress, or under stressful conditions?

•Do you have arthralgia in other joints in your body?

•Do you live with your family?

Students were asked to check items that were most relevant to their conditions. Each questionnaire filled completely by one student then the students undergo clinical examination according to World Health Organization criteria (the examination included TMJ symptoms) was done without any force; clicking, deviation, limitation and tenderness in addition the students asked about the risks factors associated TMD symptom; trauma, stressful, pain in other joint and living with family.

The research administered by face-to-face interviews, information such as age, gender, social habits and level of awareness were recorded.

Data was analyzed using SPSS version17 and presented in a form of frequencies and percentages. The final results were grouped in a form of figure and tables. For all statistical tests a P-value of less than 0.05 was considered to be significant.

When the participants were asked a number of dichotomous questions (YES/NO) question, their answers came as shown on Table 1 below.

Table 2 revealed that the prevalence of TMD symptoms among the examined students was 77.8%. The most common symptom was clicking 169(43.5%) followed by joint tenderness 123(31.6%) as shown in Table 3.

Application of statistical tests of association, chi square (x^2) among some of the variables handled, the following associations are obtained. 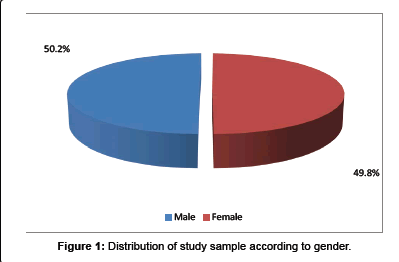 Figure 1:Distribution of study sample according to gender.

Table 1: Distribution of the factors associated with TMD symptom in the sample.

Table 2: Distribution of the TMD symptom on clinical examination.

Table 3: Distribution of TMD symptoms among the university students

The main objective of this study is to determine the prevalence of TMD, as indicated by the symptoms among a number of 500 university students. Males and females were almost equal in number.

Studies carried by Soukaina and Bora demonstrated that pain in or about the ears was the most common symptom. Concerning genders a significant difference was observed, female showed a higher prevalence of TMD than male in the present study. The same results had been reported by Anamari among 2396 Brazilian students [10], and Tecco among 1134 subjects divided into two groups’ children and adolescents [10-13]. In the present study clicking was found to be the most common symptom in the clinical examination followed by tenderness, whereas deviation and limitation were the least common symptoms. Similar results had been obtained among 407 Lebanese and Italian students [14], in addition to the studies done by Okeson and Louis, Woman [15,16].

The current results revealed that trauma had no significance effect on developing TMD among the investigated students, which disagreed with study done by Kronn to show the incidence of TMJ dysfunction in patients who have suffered a cervical whiplash injury following a traffic accident [17] and study carried out in Jordon by Soukaina [11].

This variation in the results may be partially attributed to the Sudanese behavior and customer where Sudanese family express much care for their youngsters and that’s why students live under stressful conditions and experience TMD.

In this study health science students are more likely to be affected by TMD than non- health science students. Which was in accordance with the study performed in Jordon by Soukaina, students in the health and science collages has a significantly higher risk of developing TMD [11]. An explanation for that health science student’s experience more study load and more work to do which let the students under greater stress and anxiety which in accordance to the results achieved by Conti, Speculand and Filho [18-20] when the etiology of TMD and the relation of stressful conditions with TMD were evaluated. Or it can be attributed to the fact that the medical students have great knowledge and awareness about the TMD.

The results of the subjective finding of this study concerning pain in or about the ear and joint locking were found to be more common in males than females, which in accordance to the results reported among Jordan population Soukaina [11]. In addition trauma to the head or neck areas was found to be significantly related to hear joint sounds and joint locking. Students that experienced pain in other joints in their body were more affected by joint locking. Moreover, students who live with their families were more exaggerated by heard joint sounds. This finding can was confirmed that students who live with their families are more frequent affected by TMD.

Table 5: Distribution of TMD symptoms among health and non-health students.

Table 6: Distribution of factors associated with TMD symptom among the students.

TMD is of high prevalence among Sudanese university students, clicking was found to be the most common symptom, followed by tenderness whereas limitation and deviation had the least prevalence. Medical students were more affected by TMD symptoms, due to the effect of stress and anxiety. A student who lives with their families was more affected by TMD, which signify the role of Sudanese culture and traditions in developing TMD.

A part from what has been achieved from this study, the researcher recommended further studies with a larger sample size to be conducted due to the significance of TMD and their high prevalence rates and intermittent TMJ examination should be acquire to students undergoing stress to avert potential TMD.