The Aspergillus niger was tested for its ability to produce invertase on natural agricultural residues. Orange peel was selected as substrate due to its high peak enzyme activity, the maximum invertase activity was obtained in preliminary studies by incubating flasks containing orange peel as substrate supplemented with sucrose (1.0% w/v), yeast extract (1% w/v), and 4 ml of A. niger conidial suspension for 96 hours at 30°C.

Invertase [β-fructofuranosidases (EC.3.2.1.26)] is an enzyme that is widely distributed among the biosphere. It is broadly used in the food and beverage industry to produce candies, chocolates, lactic acid and glycerol etc. [1]. Invertase is produced by different strains of microorganisms, Saccharomyces cerevisiae commonly called Baker’s yeast is the primary strain used for the production of Invertase commercially. They are found in wild growing on the skin of grapes, oranges and other fruits. Though plants like pineapple (Ananas comosus), oat (Avena sativa), pea (Pisum sativum), can also be used, but in common microorganisms like A. niger, S. cerevisiae, Candida utilis, are considered ideal for their study [2,3].

The present study carried out with the objective to utilize the fruit peel waste to convert commercially valuable products. Beside their pollution and hazardous aspects, in many cases, food processing wastes might have potential for recycling raw materials or for conversion into useful product of higher. When compared to submerged fermentation, the production of Enzymes by solid state fermentation have potential advantages i.e., simplicity in operation, high productivity fermentation, less favorable for growth contaminants and concentrated product formation [4,5].

The microorganism Aspergillus niger MTCC 282 was produced from Microbial Type Culture Collection and Gene Bank (MTCC), Chandigarh, India. The production of Invertase enzyme requires the preparation of inoculum scraped and washed from the slant culture with 10 ml sterile water; and 2 ml of the inoculum was added to each 250 ml flasks containing production medium. The medium used for the production of enzyme under solid-state fermentation composed of (gm/L): Sucrose 25, yeast extract 10, KH2PO4-4.38, (NH4)2SO4-8.76, CaCl2·2H2O 0.088, MgSO4·7H2O - 0.88, pH - 5.0.

Locally available fruit substrates were collected such as orange peel, pomegranate peel, pineapple peel washed, shade dried, grinded and stored in the polyethylene bags at room temperature. They were autoclaved at 15 lbs for 20 minutes before use [4].

Substrate (peels of orange/pomegranate/pineapple) was collected and dried. 5 g of substrate powder was taken in 250 ml erlenmeyer flask and mixed with water to a solid liquid ratio of 5:4 (w/v). The thoroughly mixed substrate was autoclaved for 20 min at 121°C, 15 lb and cooled to room temperature. Under aseptic conditions, the sterilized solid state medium was inoculated with 2 ml (23 × 106 cfu/ml) spore inoculum. The contents were mixed thoroughly and the flaks were placed in an incubator at 32°C for 24 h intervals [4]. All the sets were prepared in duplicate.

After fermentation, the 250 ml conical flask containing the fermented solid (5 g) was added with the extractant (0.1% Tween 80) in 1:5 w/v ratio, mixed thoroughly on a rotary shaker (150 rev/ min) for 30 min and filtered. After extracting twice the extracts were pooled, centrifuged at 4°C for 20 min at 10,000 rev/min and the clear supernatant was used as crude enzyme for assay and purification studies.

DNS method for assay procedure (Miller): DNS method tests for the presence of free carbonyl group (C=O), the so-called reducing sugars. This involves the oxidation of the aldehyde functional group present in glucose [6]. Simultaneously, 3,5-dinitrosalicylic acid (DNS) gets reduced to 3-amino,5-nitrosalicylic acid under alkaline conditions. Reduced sugar (glucose) concentrations were determined at a wavelength of 540 nm by using a UV spectrophotometer and a preconstructed calibration curve.

Procedure: All reagents making up the DNS reagent were mixed and dissolved in distilled water. 1.0 ml of sample (samples/standard NAG solutions/blank) was added to 1.0 ml of substrate and incubated at 35°C for 1 hour. 1.0 ml of NaOH was added and boiled for 5 minutes to stop enzyme reaction. Mixture was then centrifuged at 4000 rpm for 5 minutes. 1.0 ml of supernatant was added to 1.0 ml of DNS reagent and boiled for 5 minutes until red brown color appear. The solution was cooled to room temperature under running tap water. Absorbance of the solution was determined at 540 nm using spectrophotometer. The enzyme activity was quantified according to DNS standard curve [2,6].

Both the physico-chemical (i.e., incubation time, incubation temperature, inoculum age, initial pH) and nutritional (i.e., addition of carbon sources, nitrogen sources) parameters are known to influence the production of microbial metabolites during a fermentation process. They were optimized by the conventional method of optimizing one independent parameter at a time, while fixing all others at a certain value [7]. The parameter optimized in one experiment was maintained in the subsequent experiments. The same production medium used in secondary screening was used for optimization studies. In all the experiments the flasks were inoculated with 2 ml of inoculum prepared from the slant cultures [8]. 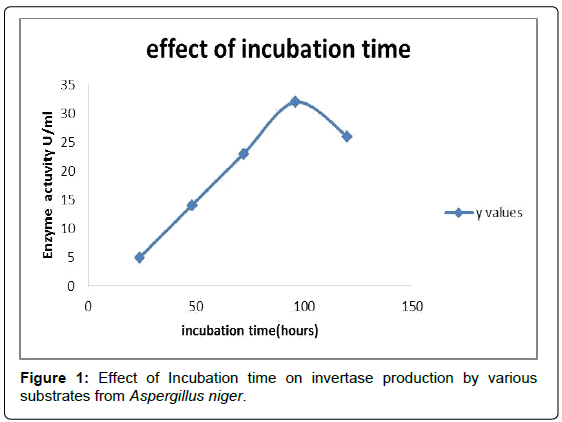 Table 1: Effect of Carbon and Nitrogen sources on Invertase production by Aspergillus niger. 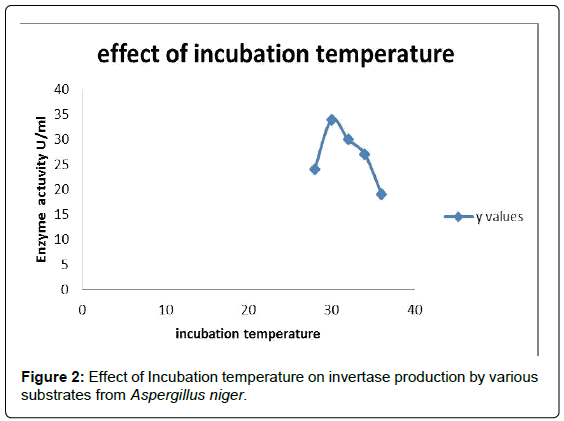 To determine the effect of inoculum volume on invertase production, 50 ml of the production medium inoculated with 1 ml, 2 ml, 3 ml, 4 ml and 5 ml inoculum prepared from 5 day old culture and incubated at 30°C. The strain has shown maximum enzyme production 43 U/ml when the volume of the medium was 3 ml (Figure 3 and Table 2). 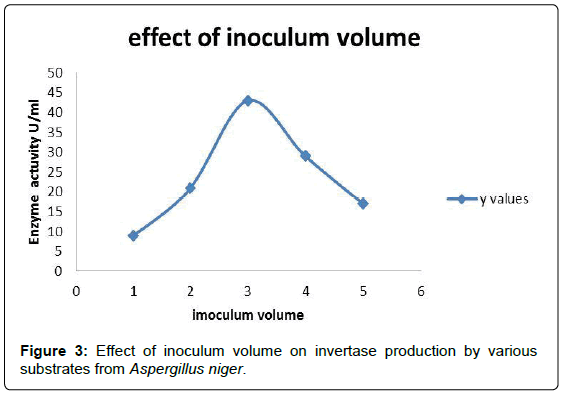 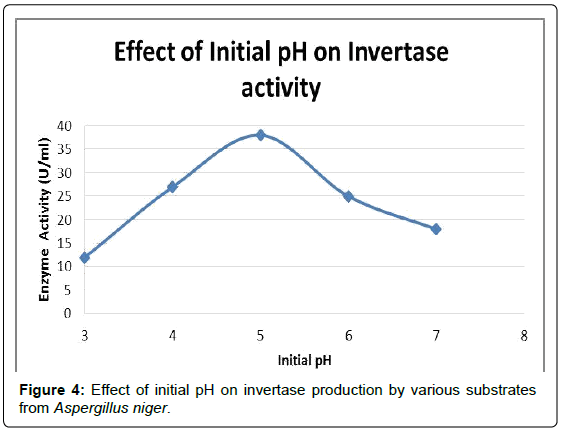 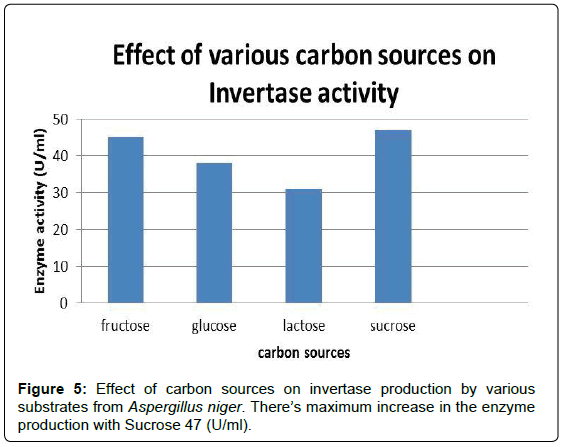 To determine the effect of nitrogen source on Invertase production, different nitrogen sources such as Peptone, Urea, Yeast and Malt were added at a concentration of 1% w/v to the production medium (pH- 5) containing sucrose as the carbon source instead of glucose and inoculated with 4% inoculum from a 5 day old culture [13]. The flasks were incubated at 30°C for 96 hours and subsequently evaluated for Invertase activity. The strain has shown maximum enzyme production when Yeast was used as the nitrogen source (Figures 6 and 7; Table 2). 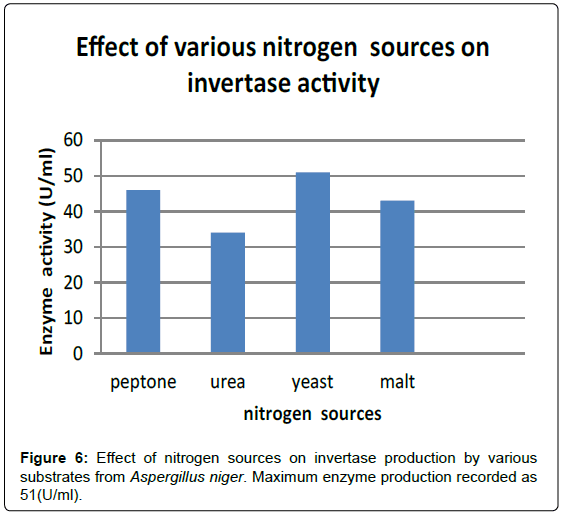 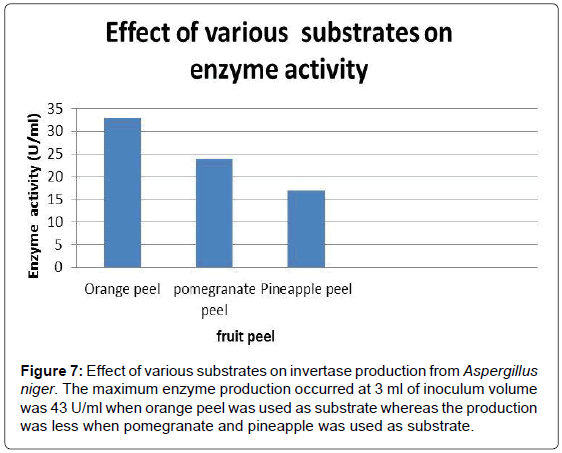 The authors would like to convey thanks to the Department of Chemical Engineering, Andhra University (A), Visakhapatnam, for providing the laboratory facilities. The authors wish to express gratitude to Coworkers and Friends for their support and encouragement through the duration of the research work.

Copyright: © 2016 Raju AI-CH, et al. This is an open-access article distributed under the terms of the Creative Commons Attribution License, which permits unrestricted use, distribution, and reproduction in any medium, provided the original author and source are credited.