The dramatic increase in use of psychoactive medications in recent years has reached far and wide into many different spheres of American life. In the military, for example, a recent report on the prescribing of psychoactive medication noted that, “nearly 8 percent of active duty Army troops are on sedatives, and another 6 percent are on antidepressants, figures that are up eightfold since 2005” (Heyes, 2012). In civilian life, as well, this trend is even stronger; Figure 1, taken from Pratt, Brody, and Gu (2011), shows that nearly 11% of Americans aged 12 and over take antidepressants (a number, the authors note, which is up nearly 400% since the early 1990’s). 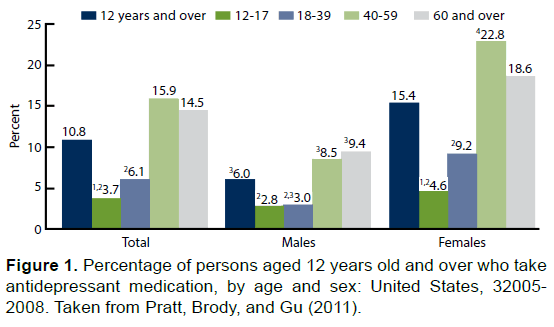 Many side effects of psychoactive medications are still being discovered. Importantly, recent research has identified a causal relationship between psychoactive medication and heat injury as a result of certain unintended side effects. Page, Hajat, Kovats, and Howard (2012) found that antipsychotic medications were associated with a 7% increase in relative risk per 1°C increase in temperature. Similarly, Kudoh, Takase & Takazawa (2003) investigated temperature regulation during anesthesia and postoperative shivering in depression patients taking antidepressant drugs. Results indicated that intraoperative core hypothermia was difficult to accomplish in patients taking antidepressants. The group with increased incidence of shivering exhibited alterations in central thermoregulation attributable to antidepressant drug use resulting in serotonergic receptor down-regulation. These findings, taken together, support the notion that individuals taking certain psychoactive medications are at a substantially higher level of risk for heat injury when exposed to higher temperatures.

This dangerous susceptibility becomes further evident when certain specific mechanisms of these medications are examined. Anti-depressants exert a plethora of physiological effects, including: affecting the hypothalamic-set temperature, impeding the function of thermoreceptors, impeding heat-production, impairing the efficacy of the cholinergic system (and thus sweat production), and impeding cutaneous vasodilatation.

Stollberger, Lutz, and Finsterer (2009) note that, specifically in SSRIs (Selective Serotonin Reuptake Inhibitors), another prominent side effect is the reduction of serum sodium and, in turn, the reduction of thirst. This could lead to accelerated dehydration during an extreme heat event.

Another class of antidepressants-tricyclics – causes subjects to experience disproportionate intolerance to heat increases, which Epstein, Albukrek, Kalmovitc, Moran, & Shapiro, (1997) postulate is to be due to their blocking effect on reuptake of norepinephrine and serotonin.

Overall, these many effects amount to a substantial obstruction to the body’s ability to self-regulate in extreme temperature situations.

This collection of scientific findings bears significantly on the health risks of emergency workers, whose activities can very often be physically strenuous, causing heightened internal bodily temperatures. All this can also be easily exacerbated by extreme environmental temperatures, such as heavy protective equipment in summertime heat, proximity to fires, etc. Firefighters are, of course, a prime example of the at-risk population of emergency workers, in that their duties can include carrying patients out of fire areas, wearing heavy uniforms in hot conditions, etcetera. Indeed, a 2008 report by the University of Illinois Fire Service Institute noted that, “heat stress may be a common causal factor in both heart attacks and slips, trips and falls [in firefighters]” (Smith, Horn, Goldstein, & Petruzzello, 2008). However, the same risks hold true in the context of many other emergency workers (e.g. EMTs, paramedics, police, etc.) who may similarly wear heavy uniforms or be obliged to engage in comparably strenuous rescue-related activities.

The heat-related side effects of the psychoactive medications here discussed very urgently enjoin us to caution. Extreme heat situations pose a substantially heightened risk of injury to those taking antidepressants (and other medications), and emergency workers might be seen as an especially at-risk population due to the nature of their professional activities.