Copyright: © 2016 Bandameedi R. This is an open-access article distributed under the terms of the Creative Commons Attribution License, which permits unrestricted use, distribution, and reproduction in any medium, provided the original author and source are credited.

In Uganda in the year 1947, Zika virus was identified from a febrile sentinel rhesus monkey and from a group of Aedes africanus mosquitoes which are frequently found in Zika forest (in Uganda) which was noted at the time of investigation of yellow fever [1]. In east Africa 1952 Zika virus was firstly detected in humans by using neutralizing antibody testing in sera. Zika virus was initially identified in the population of Uganda people [1-4]. This Zika virus is caused by RNA flavivirus closely related to that of dengue infected to human by Aedes aegyptis and Aedes albopictus mosquitoes. Most of the infections caused by Zika virus are asymptomatic, symptomatic infections are caused by a self limiting febrile illness of 4-7 days accompanied by various symptoms.

Due to the arrangement of surface proteins the Zika virus was found to be icosahedral in symmetry. It has a single stranded RNA genome consists of 10794 nucleotides encoded with 3419 amino acids [5-7]. It has two flanking coding regions which are cleared in to capsid, the precursor of the membrane (prM), envelope (E) and seven nonstructural proteins (NS). Nucleocapsid is enveloped by a host derived lipid bilayer containing E and M proteins. Zika virus closely resembles like spondweni virus, ilheus, rocio and japan encephalitis [8,9]. Initially viruses gets replicated in dendritic cells at the site of inoculation and then spread to the lymphnodes and next to blood stream [10]. Zika was mostly found in cellular cytoplasm and Zika virus antigens found in infected cell nuclei [11]. On the early days of illness onset the virus has been detected in human blood and after 11 days of onset the viral nucleic acid has been detected [12]. After 9 days of experimental inoculation virus was isolated from the serum of a monkey. At higher temperature above 60°C virus gets destroyed and also killed by using potassium permanganate, ether and was neutralised effectively with 10% ether [13].

The virus enters the host cell by attaching itself to the host cell receptors. This is brought about by the envelope proteins of the virus which induce endocytosis in the virion [14]. Upon the fusion of the virus membrane with the endosomal membrane of the host, the ssRNA is released into the host cell. The ssRNA gets translated to a polyprotein and then differentiates into structural and non-structural proteins. The viral factors responsible for the replication of the viral genome carry forward their task and these factors along with the endoplasmic reticulum of the host form dsRNA. The genome is then assembled in the ER of the host cell and then to the Golgi complex [14]. From here, they exit into the intracellular space and continue to infect other host cells (Figure 1). 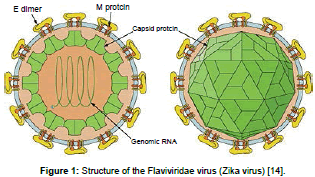 So far specific medication or antiviral treatment is not available. But WHO recommends supportive treatment which includes rest, use of analgesics but strictly NSIAD’S not recommended due to chance of Heammorhage where Zika virus also associated with Chikungunya and dengue. By using antipyretics and antihistamines to control Pruritis related with the Maculo-Papular rash, drinking fluids recommended to restore fluid lost from dehydration (Figure 2) [18]. 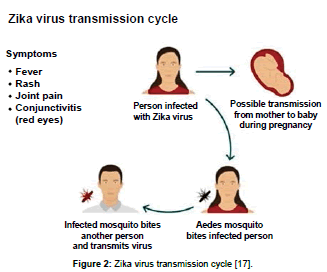 • Histopathologic examination of the umbilical cord and placenta.

• Testing of cord serum for Zika and dengue virus IgM and neutralizing antibodies [20].

• Convalescent serum (2-3 weeks later) and acute serum taken with 5 days of symptoms onset) are needed to take. These two samples are important in giving false (+ve) test due to cross reactions which are similar to the viruses of dengue.

• Cross reation with related flaviviruses (e.g.: Yellow fever or dengue is common with antibody testing and thus it became difficult to differentiate Zika virus from other viral infections.

• Zika virus RT-PCR testing can be performed on amniotic fluid. Presently it is unknown how sensitive this test for congenital infection [21,22].

• Also, it is unknown if a positive result is predictive of a subsequent foetal abnormality, and if so, what proportion of infants born after infection will have abnormalities.

• Amniocentesis is associated with an overall 0.1% risk of pregnancy loss when performed at less than 24 weeks of gestation [23]. 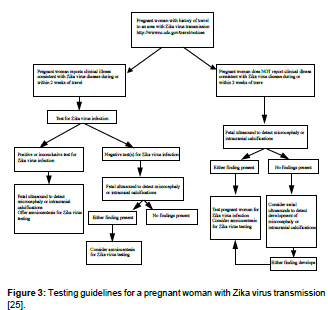 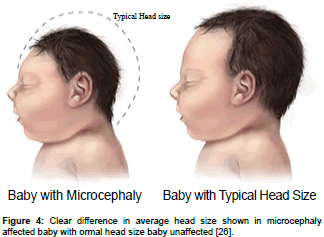 The Health Authorities Investigated and Reported the Following Suspected Cases

• In ultrasonic investigations, foetus head circumference of more than two standard deviations (SD), premature before gestational age, with or without CNS defects in ultrasonographic findings in intrauterine infections has been noticed [27].

• Foetuses with ultrasonographic head circumference of more than two standard deviations (SD) below the mean for gestational age, with or without further CNS malformations.

• Miscarriages in gestational female, without other causes has identified in exanthema.

• Live newborns of <37 weeks gestational age (preterm delivery) and a head circumference <3rd percentile according to the Fenton growth chart, by sex [28].

The laboratory confirmation of the west spreading harmful “Zika virus” in embryonal amniotic fluid, placenta or tissues of embryo i.e., foetal tissues. From different states of US there is anincrement in number of cases of Zika virus in newborns, which is symptomized by partly severe congenital malformation has been published recently.

After the outbreaks of Zika, an increase of neurological cases was noticed in the Northeast of Brazil since April 2015. In the state of Pernambuco, seven patients presented positive results for Zika by PCR-TR and viral isolation, of which six in serum samples and one in liquor. In these cases, four were diagnosed with Guillain-Barré syndrome, two with acute disseminated encephalomyelitis (ADEM) and one with meningoencephalitis. Seventy other cases are under investigation aiming the detailing of this outbreak. The demonstration of the first confirmed cases of Zika with neurological disorders alerts to a potential and serious public health problem which can reach countries with the circulation of Zika virus. In Brazil, the outbreaks of Zika were limited to the Northeast, but as the transmitter mosquito is present in the whole country, the epidemic tends to reach other highly populated states, with a potential risk of neurological figures associated to an important morbidity and mortality rate.

• Besides the microcephaly, image exams presented some common characteristics such as: Periventricular and cortical microcalcifications, vernix cerebellar hypoplasia and in some cases lisencephaly compatible with the pattern of congenital infections.

• Diseases associated to TORCH (toxoplasmosis, rubella, cytomegalovirus, syphilis, HIV, parvovirus B19, etc.) because of the transmission pattern, are not associated with large outbreaks.

• The investigation in prenatal and perinatal were negative for TORCH infections.

• Most of the mothers (70%) reported compatible features of Zika disease in the first trimester of pregnancy, the period in which the Zika V outbreak occurred in the region.

• Zika has a greater neurotropism than other arboviruses.

Other arboviruses such as dengue, endemic and epidemic in the region, are not associated to congenital malformations or chikungunya that although being associated with perinatal disease, there is no evidence of malformations. Other anomalies besides microcephaly started being identified, such as osteomuscular malformations, visual and auditory alterations. These may be related to the moment in which the infection occurred, which reinforces the need to extend the investigation and characterize a new ‘syndrome associated to congenital infection by Zika’ or simply ‘congenital Zika’, as it happens with other congenital infections that present defined patterns. The demonstration that Zika virus can lead to microcephaly brings new concepts and risks related to congenital infections, which did not exist until now. This is possible due to the etiologic agent of these congenital malformations being transmitted by the mosquitoes, a vector without prospect of elimination at medium and short term in most of the countries where Aedes circulates. This will lead to insecurity for women in the fertile period, who wish to become pregnant and eventually will lead to changes even in the family planning guidance and individual prevention measurements (the use of mosquito repellent, appropriate clothing, screens at home).

Recent cases reported the evidence regarding the link between Zika virus infection during pregnancy and congenital nervous system malformations. Basic clinical assessment and many Para clinical tests which are included under national protocols were established. They are very important to ensure antenatal care for pregnant women and evaluation of outcomes of neuronal developments that are associated with congenital malformation in infants. This effective health team include neuro paediatrician genecists, rehabilitations and psychologists.

The presence of Zika virus in the blood are seen during the first week of illness. This is called viremic phase. In order to prevent the further infection the patient should be avoided the bites of mosquitoes, use insect repellents and long sleeve clothes for covering body parts.

Prevention and Control Measures by National Health Authorities Should Include

• Propagation of virus infected mosquitoes to be prevented and human contact with such vectors should be avoided. Destroy the vector growth to strengthen the environmental management.

• Wherever necessary following control measures such as physical, biological and chemical methods.

• Adulticide treatment has been suggested in case of dengue, chikungunya, Zika virus in order to eliminate infected adult mosquitoes and interrupt the transmission.

• It is exceptional and is only effective when executed by adequately trained personnel to intensively interrupt transmission and to consolidate the elimination of vector larval breeding sites.

• By considering the susceptibility of mosquito populations select the appropriate insecticide by verifying the product label and formula [30].

• As per the instructions indicated on the product label there should be proper usage. The long lasting effective protection is provided by lemon eucalyptus oil.

Proliferating pathogenic viruses always presents newer challenges to health for the human. Each and every time there is an emergence of new viral disease. When we feel that we have found a treatment for defeating the viruses such as TB polio. Recent outbreak of Zika virus with more pathogenic flavivirus infections raised many health concerns, where we need to further evaluate specific screening and diagnostic tests along with further revealing of molecular and epidemiological work to rectify current global health issues. The short-term actions must be directed to combating the vector and aiming to reduce the vector density. At medium and long term, work should be done to develop antiviral therapies in face of the occurrence of exposure in pregnant women, with particular efforts being directed towards the development of a vaccine.