Outbreak of Neuro-Chikungunya in Northeastern Brazil

1Department of Post-Graduation in Neuropsychiatry and Behavioral Sciences, Federal University of Pernambuco, Brazil

Copyright: © 2016 Martins HAL, et al. This is an open-access article distributed under the terms of the Creative Commons Attribution License, which permits unrestricted use, distribution, and reproduction in any medium, provided the original author and source are credited.

Chikungunya virus, an alphavirus often associated with large epidemic outbreaks, has a serious social impact. The main symptoms are fever, rash and arthralgia, but recently neurologic complications have been described as an important cause of morbidity. During a large outbreak in at least five towns in poor states of the Brazilian northeast over recent months, 22 patients with chikungunya confirmed by serologic tests who presented some degree of neurologic involvement were assessed in our department. Changes in consciousness were present in almost half of the patients and epileptic seizures and persecutory delusions were present in three and four patients, respectively. As in Brazil there are insufficient serologic tests for patients with a clinical picture of neuro-chikungunya, this is probably a very underdiagnosed disease. The outcomes of the neurologic symptoms were good in all patients of the current series, in contrast with the permanent sequelae reported by other authors.

Chikungunya virus (CHIKV) is an alphavirus found worldwide [1] with recent outbreaks in Asia, Europe, and islands in the Indian Ocean [2,3]. It is an emerging disease in Brazil with a very large outbreak reported in the northeast of the country. CHIKV is transmitted by the bite of the aedes genus of mosquitoes [3] however; there is no reliable data about the prevalence of the insect in this region. Of all the alpha viruses, CHIKV is definitely the most important human pathogen in terms of mortality and morbidity [2].

CHIKV characteristically manifests as fever, rash and arthralgia [3-6] and should always be considered in the differential diagnosis in sudden onset febrile polyarthralgia [7]. The word chikungunya means, “become twisted” in the Kimakonde language, an ethnic group in southeastern Tanzania and Northern Mozambique. CHIKV fever shares some clinical signs with dengue such as fever, headache, myalgia and skin rash and can be misdiagnosed in areas where dengue is common. The most important difference is that dengue can cause bleeding and CHIKV causes much more intense arthralgia.

There has recently been a large increase in reports of neurologic complications in infected people [5,8-13]. A very broad range of neurologic manifestations have been reported in CHIKV patients including seizures, speech disorders, motor dysfunction, sensorial disorders and altered mental status [5]. Although relatively uncommon, fatal outcomes related to neurologic disease have been reported [14].

Herein we describe a series of patients with CHIKV presenting neurologic manifestations during a very large outbreak in the northeastern region of Brazil. There are no previous reports of neurochikungunya in South America.

This study consisted of a series of 22 patients with neurochikungunya fever, including 10 men, with ages ranging from 29-84 years and a mean age of 59 ± 20 years. The patients were evaluated between January 2016 and March 2016 in a private clinic in Surubim, a small town located in northeastern Brazilian. Patients with suspicion of CHIKV after a physical evaluation in a primary healthcare clinic, who within seven days suffered neurological symptoms, were referred to our service. No patient had a previous history of neurological disease.

All the patients had clinical signs of CHIKV including sudden onset of fever >38.5°C accompanied by incapacitating joint pain. All the patients were assessed at least twice a week, during three months by the same neurologist. The neurological examination consisted of assessing the patient’s level of consciousness, mental status, cranial nerves, muscle strength, balance, gait, reflexes and sensitivity.

The diagnosis was confirmed by serologic test with results positive for IgM antibodies (Figure 1). The cut-off point was an absorbance value of 1.3. The cut-off was taken as the mean absorbance value of the cut-off control determinations. The result is positive when the value is 10% higher than the cut-off point for the reaction and negative for values that are 10% lower. The enzyme-linked immunosorbent assay (ELISA) technique used a CHIKV microplate (IgM), sample diluent, stop solution, washing solution (20x conc.), lyophilized CHIKV antigen solution, streptavidin conjugate, tetramethyl benzidine substrate solution, CHIKV IgM positive control, CHIKV IgM negative control and CHIKV IgM cut-off control. 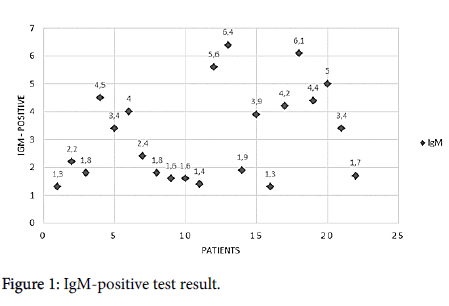 Cerebrospinal fluid (CSF) tests were not performed due to financial restrictions. This research was approved by the Ethics Committee of the University of Pernambuco and all patients gave their written consent to participate in the study.

Table 1 shows that the majority of the symptoms were found in over 50-year-old patients. Symptoms such as fever and arthralgia were highly prevalent. Changes in consciousness were present in almost half of the patients. Three patients had generalized epileptic seizures and four patients had persecutory delusions, one of whom, presented suicidal behavior. One patient presented symptoms of severe transverse myelitis with muscle weakness and changes in sensitivity of the lower extremities along with sphincter dysfunction.

Neurologic complications of CHIKV infection are not so common, but in recent years, some cases have been reported, particularly in large outbreaks in Asia [1]. Emerging arbovirus infections are expanding to new geographic regions. In Brazil, the species of mosquito Aedes aegypti is endemic making a huge Chikungunya outbreak quite possible.

The pathogenesis of neuro-chikungunya is not well understood [1,3,5]. Many Patients in this series presented with altered levels of consciousness. These patients were confused about their spatial and temporal orientation and suffered anterograde amnesia. Some of them, presented persecutory delusions and suicidal behavior that were well controlled with risperidone (2 mg b.i.d.). It seems that encephalitis is the most common form of neuro-chikungunya [1]. In India, similar symptoms were described in hospitalized CHIKV fever patients [15,16].

Generally, in the context of neuro-chikungunya, epileptic seizures come with other neurologic symptoms, but three of our patients presented isolated generalized crises without evidence of a focal onset that remitted completely after taking valproate acid.

One patient presented transverse myelitis. Only eight days after the initial symptoms of fever and arthralgia, he could not move the lower extremities and presented with sensitivity only as far as the thoracic region (about T10). He took oral corticosteroids for two months with complete remission of the symptoms. Bank et al. [7] reported on a patient with myeloradiculopathy that appeared four days after the initial symptoms of CHIKV infection; this patient responded to corticosteroids similar to our patient. It is possible that a direct attack of the central nervous system by the virus occurred in these cases, because some neurological manifestations were present in the viremic stage of infection.

Two patients had diffuse and continuous headaches, lasting at least four days that probably were related to the acute phase of the disease with central nervous system invasion; this was not confirmed by the CSF test. It is possibly that CHIKV causes changes in the circadian rhythm as four patients in this report had severe insomnia. To our knowledge, this possibility has not been reported previously.

All patients of the current series had satisfactory evolutions within two months in relation to the neurologic symptoms, in contrast with the permanent severe neurologic sequelae and even death that have been reported by other authors [10,17,18]. The possibility of a less virulent strain should be considered as no study has investigated the CHIKV lineage in northeastern Brazil. In addition, the prognosis was probably good because patients had prompt diagnoses and appropriate supportive care.

However, many patients continued with severe joint pain that, in general, provoked persistent impairment, as was described in another study [19]. In another series, age >60 years was a significant risk factor for more severe manifestations of the disease [1,20,21]; in this study, almost all patients were in their 60s or 70s. CHIKV must be considered in the differential diagnosis of a large range of neurologic syndromes in endemic regions.

Epidemic CHIKV occurs in cycles of seven to eight years after a silent period [22], which is of great concern in Brazil, as the social and environmental conditions, in particular the northeastern region, are favorable for regular re-emergence of CHIKV outbreaks. Moreover, CHIKV infection may be responsible for severe clinical presentations, even in patients with unremarkable medical histories [23,24].