Hepatitis C infection among Hemodialysis (HD) patients is a recognized global problem. The incidence and prevalence of HCV in dialysis patients vary widely among geographical regions in the Kingdom of Saudi Arabia (KSA). However, the HCV incidence has marked decline in all regions within KSA. But it is noted that the risk of occasional nosocomial transmission remains. We intend to apply the Seemingly Unrelated Regression (SUR) models to develop a scientific strategy to estimate the future burden of HCV in dialysis units. These predictions may provide baseline information for disease management intervention and cost control. The model based predictions show that the decline in the HCV incidence which started in 2004 is projected to potentially reach zero by the year 2014.

Infection with the hepatitis C virus (HCV) is the leading cause of chronic liver disease worldwide. With an estimated prevalence of 3% in the world population (around 170 million infected individuals), HCV heavily burdens public health [1]. An estimated 2-3% of the world’s population is living with hepatitis C virus (HCV) infection, and each year, >350000 die of HCV-related conditions, including cirrhosis and liver cancer. The epidemiology and burden of HCV infection varies throughout the world, with country-specific prevalence ranging from <1% to >10%. In contrast to the United States and other developed countries, HCV transmission in developing countries frequently results from exposure to infected blood in healthcare and community settings [1]. The World Health Organization (WHO) releases global estimates on the prevalence and burden of HCV infection [2].

Several studies documented that HCV infection is more common in dialysis patients than in healthy populations. The best data regarding prevalence among dialysis patients were provided by Dialysis Outcomes and Practice Patterns Study (DOPPS), which was a prospective, observational study that reported the prevalence of HCV among adult hemodialysis patients randomly selected from 308 representative dialysis facilities in France, Germany, Italy, Japan, Spain, the United Kingdom, and the United States [2]. The overall prevalence was 13.5% (compared with global prevalence in the general population of approximately 3%).

Several reports have documented the progressive increase in the prevalence of HCV among dialysis patients, in both Western and developing countries. A study in Syria reported that the overall prevalence of anti-HCV among HD patients was 48.9%; 24.4% in one center (Al-Mouassat Hospital) and 88.6% in the other (Kidney Hospital). It is interesting to see that there was a significant correlation between prevalence of anti-HCV and duration of HD. The prevalence was 36.7% for patients on HD for <3 years and 65% in patients on HD for >3 years (p < 0.05) [3].

Megmar et al. [4] reported that the HCV infection has declined in regions where the screening for anti-HCV in blood banks and hemodialysis-specific infection control measures were adopted. In Brazil, these measures were implemented in 1993 and 1996, respectively. Analysis of risk factors showed that length of time on hemodialysis, blood transfusion before screening for anti-HCV and treatment in multiple units were statistically associated with anti-HCV (p < 0.05) [5]. Studies by Espinosa et al. [6] and Natov et al. [7] showed a significant decline of hepatitis C infection in hemodialysis patients of Central Brazil, ratifying the importance of public health strategies for control and prevention of hepatitis C in the hemodialysis units. In addition, HCV infected hemodialysis patients have an increased risk of death when compared with those not infected [8].

Another study was conducted in Libya whose aim was to investigate the incidence and prevalence of HBV and HCV infection in the HD population, as well as risk factors for infection. All adult patients receiving maintenance HD (n = 2382) in Libyan dialysis centers (n = 39) were studied between May 2009 and October 2010. Patients who were seronegative for HBV and HCV (n = 1160) were followed up for 1 year to detect seroconversions. The prevalence of HBV ± HCV infection varied widely between HD centers from 0% to 75.9%. Wide variation in rates of newly acquired infections was observed between dialysis centers [9]. It is clear then that patients on maintenance HD in Libya have a high incidence and prevalence of HCV infection. The factors associated with HBV and HCV infection are highly suggestive of nosocomial transmission within HD units.

This paper has two objectives. Firstly; focusing on data from the Kingdom of Saudi Arabia, we quantify the regional and temporal variability in both the number of patients on hemodialysis (HD), and predict the number of HCV cases among them. Secondly; we use statistical prediction models to explore the pattern of increase (decrease) in the number of patients needing dialysis, and use these predictions to estimate the future count of HCV among HD patients. We summarize the results by constructing an-overall confidence limits on the perceived population prevalence, and focus on the regional variation in the prevalence of HCV among HD patients in Saudi Arabia. We develop a Seemingly Unrelated Regression (SUR) models to investigate regional and temporal variation in the prevalence of HCV among Saudi HD patients.

From the above studies we conclude that the main risk factors implicated for HCV infection among HD patients are:

The number of blood transfusions

The risk of seroconversion increases with time on dialysis. The interval since beginning dialysis has been reported to be significantly longer among anti-HCV-positive patients, compared with anti-HCVnegative patients, and the risk of HCV infection increases considerably after a decade of hemodialysis [10].

The prevalence of HCV infection in dialysis patients is quite variable. Several studies have been conducted in Saudi dialysis units. The data presented in (Table 1) support this claim. Summarizing the data we find that the prevalence is between 30% and 80%. This table is adapted from [14] and the references therein [15-32].

Data from the studies presented in Table 1, displayed in Figure 1, may be used to construct and overall 95% confidence interval on the HCV prevalence in dialysis units. This is given as (0.308, 0.810). This interval overlaps with the worldwide interval prevalence as reported in [10] (Figure 1). 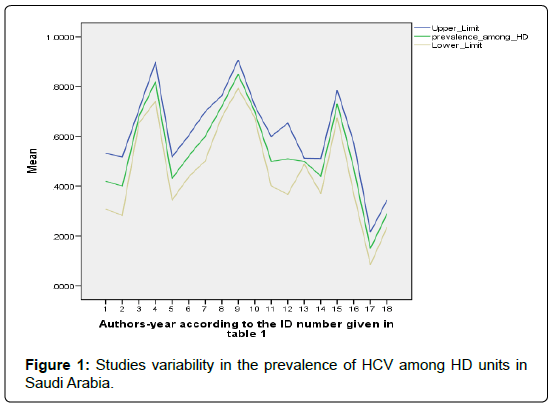 Figure 1: Studies variability in the prevalence of HCV among HD units in Saudi Arabia.

The Saudi data for the regional distribution of HCV among dialysis patients was obtained from the prospectively collected data by the Saudi Center for Organ Transplant that is reported yearly as SCOT annual report [32]. The database divides the transplant centers into five regions; central region (Riyadh & Qassim), western region (Jeddah and Makkah), eastern region (Dammam and Al-Khobar), northern region, and southern region. The number of HD patients and the count of HCV infected among them were reported for each region for the years 1999- 2011. These data will be used to train our prediction model, while data for the years 2012, 2013, and 2014 will be used for model validation. Figure 2 depicts the regional distribution of the HCV in dialysis patients over the period 1999-2011. 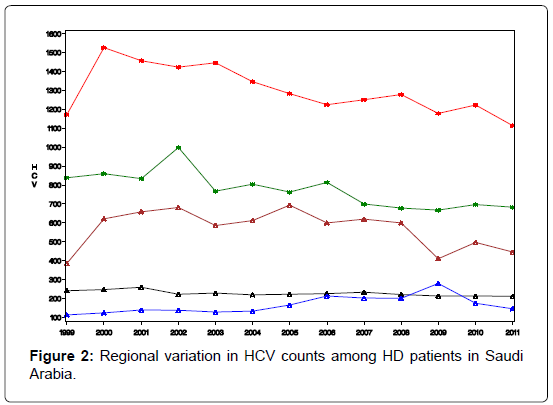 As can be seen from the above set-up the two equations appear unrelated, and we might be tempted to estimate the regression parameters independently, but in fact they are not. For this reason the system is referred to as a system of Seemingly Unrelated Regression (SUR) models. Of course, if the two equations actually are un-related, then we should estimate them separately. But it may be the case that there is a relation between the equations, brought forward by correlation between the two error terms. If the two error terms are correlated, then we can gain a more efficient estimator by estimating the two equations jointly, as was shown by Zellner [33]. If ∈1 is correlated with ∈2, then knowledge of ∈2 can help us predict the value of ∈1 efficiently. The estimation of these models is achieved quite easily using the Procedure “SYSLIN”, implemented in the SAS program [34].

The Northern region is obtained when all the X’s are set to zero. The regression equations from the SUR are given as:

We produced predictions based on models (10) and (2) in Table 2. We use the concordance correlation coefficient introduced by Lin [35] as a measure of agreements between two sets of measurements, to assess the goodness of fit (GOF) of the prediction model. High agreement between the observed and the model based predicted counts would be an indicative of the reproducibility of the model. The measure of agreement is given by:

Predicting the burden of HCV among dialysis patients: Ratio prediction

Alternative to the predictions models of counts, we may be interested in predicting the percentage of HCV patients among the dialysis patients. Figure 3 shows that the rate of decline of this ratio # HCV/# HD across the 5 regions is almost the same (Figures 3-5). 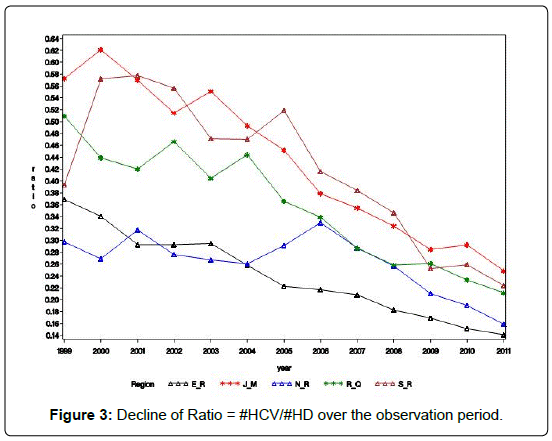 Figure 3: Decline of Ratio = #HCV/#HD over the observation period. Figure 4: Predicted counts of HCV and HD using the SUR models, depicting the increase in HD and the decline in the HCV counts. 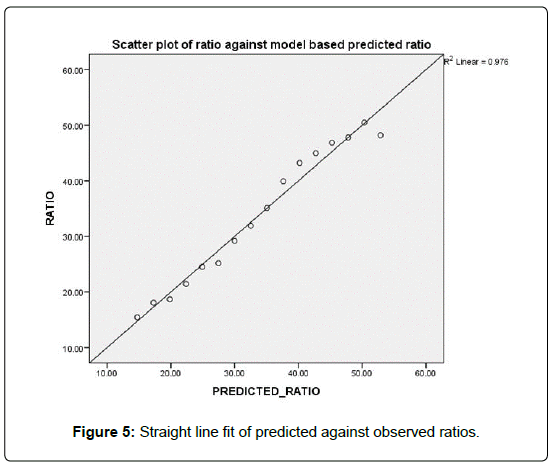 Figure 5 shows that the linear relationship between the predicted ratio and the observed ratios. The concordance correlation ρc = 0.988 indicating the excellent goodness of fit of the model to the data, and its high predictability. In Figure 6 we show the models based decline in the predictions of the future ratios. 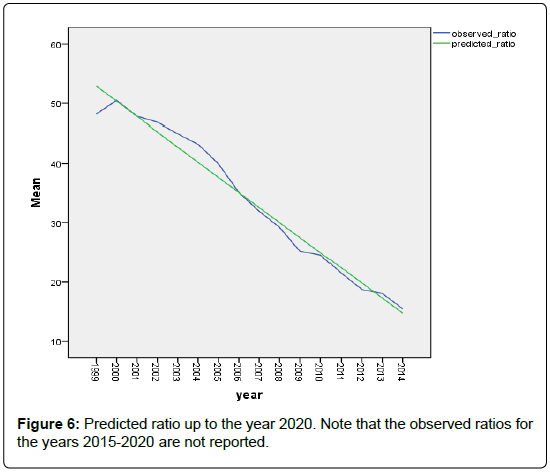 We have documented the significant variation in the rate of HCV in dialysis units among the regions in Saudi Arabia. We noted also that, starting from the year 2004, there has been a steady decline in this incidence in all regions. This decline coincides with the worldwide trend, and is attributed to the improved infection control practices, screening for blood products, and the strict adherence to universal hygiene precautions. Assuming that the infection control practices in Saudi Arabia will remain in place, we predict, based on the regression models introduced here, that the prevalence of HCV in dialysis units would be near zero by the year 2019.

There are two limitations to our study; firstly potential risk factors such as gender, age, and HBV or HIV infections were not investigated. Secondly; our study is ecological meaning that the analyses used retrospective information from a national surveillance system of registration. Therefore, we should cautiously interpret the results, and one should not be tempted to extend these findings to risk prediction at the individual subject level.

The Authors declare that there is no conflict of interest regarding the publication of this article.

Copyright: © 2016 Shoukri M, et al. This is an open-access article distributed under the terms of the Creative Commons Attribution License, which permits unrestricted use, distribution, and reproduction in any medium, provided the original author and source are credited.