Copyright: © 2016, Wang J, et al. This is an open-access article distributed under the terms of the Creative Commons Attribution License, which permits unrestricted use, distribution, and reproduction in any medium, provided the original author and source are credited.

Recently, microcantilever-based technologies are playing more and more important roles in early diagnosis of cancer due to their high sensitivity, fast response, low cost, small reagent consumption, portability, real-time, labelfree detection, and so on. However, in conventional cantilever sensors working on mass-loading principle, the change of stiffness coefficient k is neglected. This results in distinct error for mass detection. Some researchers tried a local immobilization method to eliminate the undesired effect of k. But the change of k in this method still brings unexpected error. An accurate theoretical model is needed to take the effect of k change into account in the local immobilization approach. A micro-cavity was designed in the free end of the cantilever for local antibody immobilization in our work, thus the adsorption-induced variation of k can be dramatically reduced compared to that caused by adsorption of the whole lever. In addition, an analytical model has been established to eliminate the effect of adsorption-induced lever stiffness change and has been applied to precise mass detection of cancer biomarker AFP, the detected AFP antigen mass (7.6 pg/ml) is close to the calculated one (5.5 pg/ml), two orders of magnitude better than the value by the fully antibody-immobilized cantilever sensor. These approaches will promote clinical application of the cantilever sensors in early diagnosis of cancer.

Generally, cantilevers have two working modes, static mode and dynamic mode. In dynamic mode, the lever stiffness k was neglected, thus the resonance frequency shift only depended on the variation of mass m. However, the detection error was substantial due to the adsorption-induced surface stress [6]. Some research groups have found the ineligible difference between the theoretical and measured values. For example, Jeong et al. reported that the theoretical frequency shift was 2 Hz calculated by mass loading of C-reactive protein, while the measured result was 184 Hz, Amit et al. [7] found that the measured frequency shift was 132 kHz, 5 times larger than the calculated 24 kHz. The experimental results indicated that the change of lever stiffness k played an important role in the frequency shift due to adsorption of biomolecules on the cantilever [8].

We have reported a novel local reaction cavity structure in our previous cantilever arrays [11]. The local reaction at the free end of the lever can effectively minimize the impact on lever stiffness k. In order to increase the reaction area, the pillar arrays were fabricated. Moreover, we have established an analytical model to reduce the effect of k change on mass detection accuracy. Our model integrates the adsorption-induced surface stress and Young’s modulus, and consequently includes the impacts of k change and m change. The local reaction structure and the accurate theoretical model help to dramatically improve the accuracy in liver cancer biomarker detection with microcantilever biosensors.

Fabrication and functionalization of the cantilever

The microcantilever arrays were fabricated with MEMS technologies, and then functionalized with antibody. The details were given in published paper [11]. Cantilever arrays with five levers are designed to jointly detect multi-biomarkers. One of them served as reference lever, which was designed to remove the influence of environment noise and non-specific adsorption. The others were used to specifically react with the biomarkers. Furthermore, the novel local micro-cavity structures were designed to obtain local reaction in the tip of the lever. To increase the reaction areas of antigen, the pillar arrays were fabricated.

The mechanical properties of the cantilevers were characterized by laser Doppler vibration system. The quality factors (Q) of the cantilever are 587 in air and 49434 in vacuum, good enough for achieving high sensitivity.

To verify the performance of the fabricated cantilever-based mass sensor, a 5.5 pg/mL AFP antigen solution is prepared and detected with two different sensors. The first sensor, named as fully immobilized lever, has the antibody immobilized on full cantilever surface. And the second sensor, named as locally immobilized lever, has the antibody locally printed in the micro-cavity. The frequency shift is 830 Hz, about two orders of magnitude larger than the theoretical one 6 Hz corresponding to 5.5 pg/mL. This deviation could mainly be attributed to the lever k variation caused by the AFP adsorption on the whole cantilever.

The effect of the k variation on the frequency shift is greatly decreased by locally immobilizing the AFP antibody. Using the mentioned analytical model to further reduce the deviation from k change caused by the multilayer organic and adorption-induced surface stress, the experimental frequency shift was modified to 8.4 Hz, corresponding to AFP antigen mass of 7.6 pg/mL, close to 5.5 pg/mL. 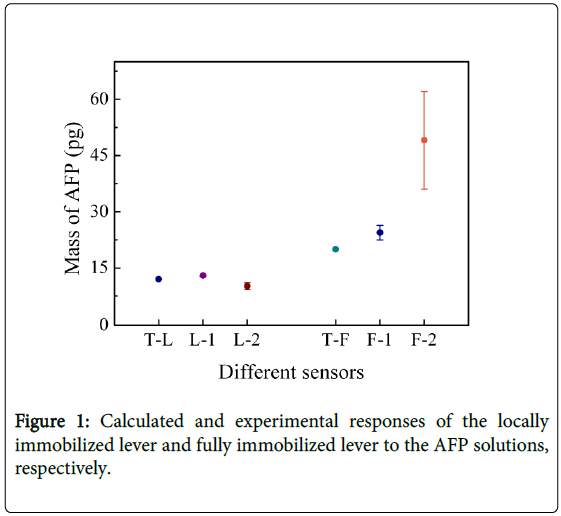 Various concentrations of 0-50 pg/ml AFP antigen solutions were prepared and detected by the locally immobilized anti-AFP cantilevers [21]. Figure 2 depicts the measured frequency shift of locally immobilized anti-AFP levers to the various concentrations of antigen AFP, and a linear regression was obtained with a relative uncertainty less than 5%. Furthermore, the result of the sensor response to 0 pg/ml anti-AFP is nearly 0, indicating that the binding between AFP antigens to antibodies was specific. 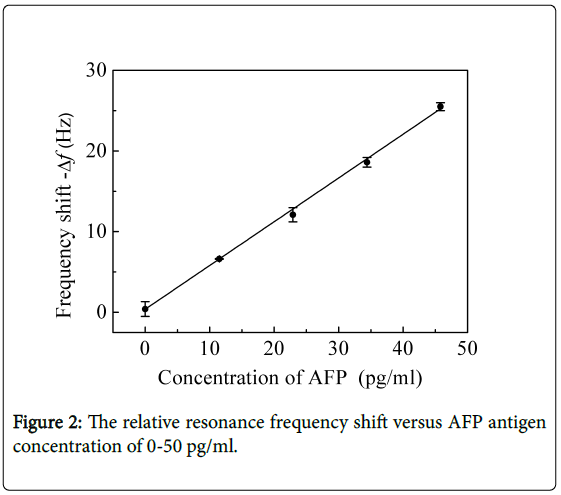 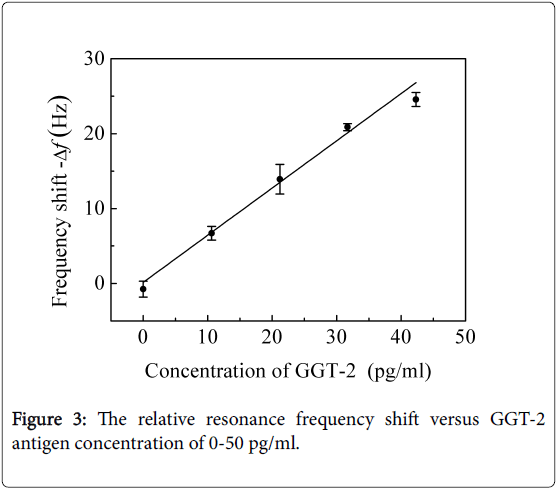 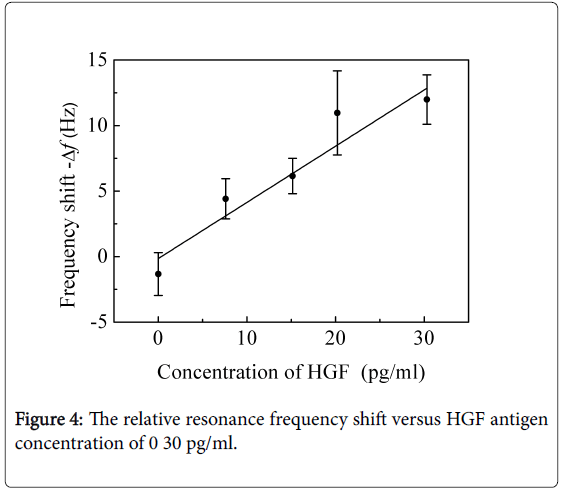 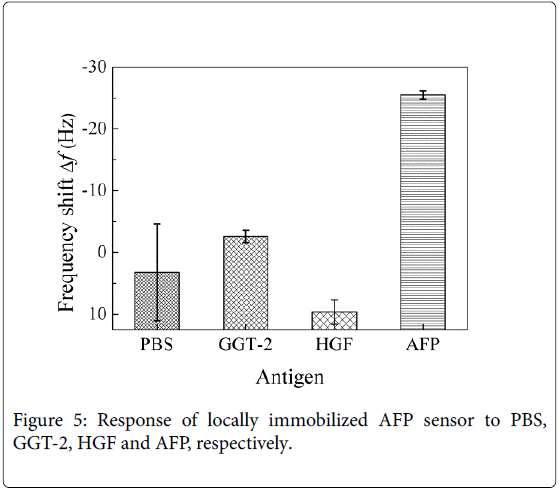 The cantilever arrays locally immobilized with anti-AFP was utilized to detect PBS, AFP, HGF, and GGT-2, respectively. Figure 2 shows the response of sensor to the different antigens, AFP, HGF, and GGT-2. It indicates that the reaction of antigen and antibody was specific, and the cross reaction between HGF, GGT-2, and AFP was slight.