In a previous study, we observed that female gender, a permanent job and being in the warmer months of the year were risk factors for self-injury behaviour with a death intent (Zeppegno et al., 2015). Some recent reviews found the following key variables associated with the repetition of suicide attempts: unemployment, unmarried status, diagnosis of mental disorders, suicidal ideation, stressful life events, family history of suicidal behavior (Mendez-Bustos et al., 2013); being a victim of sexual abuse, poor global functioning, having a psychiatric disorder, being on psychiatric treatment, depression, anxiety, and alcohol abuse or dependence (Beghi, Rosenbaum, Cerri & Cornaggia, 2013). Moreover, correlations were found for other variables including Caucasian ethnicity, having a criminal record, having any mood disorders, bad family environment, and impulsivity. For completed suicide, the strongest predictors were older age, suicide ideation, and history of suicide attempt (Beghi, Rosenbaum, Cerri & Cornaggia, 2013).

According to these premises and considering that Piedmont and particularly its North-Eastern areas are at high-risk for suicide (Torre et al., 1999; Torre et al., 2001; Zeppegno et al., 2005), we assessed features such as socio-demographic characteristics, assessment of suicide intent and suicidal behaviors and the outcome of psychiatric consultation, including type of acute intervention delivered to the patient and psychiatric admission rates, in subjects referring for a suicide attempt to the Emergency Room (ER) of the second largest Hospital in Piedmont.

Our aim was to compare the characteristics (socio-demographic, psychopathological and clinical) of patients with and without suicide reattempt (SRs versus single suicide attempters, SSAs), and to briefly discuss our findings in the light of the existing literature. It is widely acknowledged that attempted suicide is a strong risk factor for subsequent suicidal behaviors, but for SRs no clear guidelines exist for interventions effective in reducing subsequent repetition of suicide (Bertolote et al., 2010; Bilén et al., 2014). Hence it is essential to outline a SRs “profile” in order to develop prevention strategies (Wasserman et al., 2012). Actually, a recent review of tertiary prevention for suicide attempters underscored that the rationale behind most approaches still needs to be clarified, and that several methodological flaws still exist in many studies (Daigle et al., 2011; Hvid et al., 2011), which researchers should try to overcome.

During the study period (1st March 2008-31st December 2014), we included patients aged > 16 years, referred to the ER of the AOU Maggiore della Carità Hospital in Novara for an index suicide attempt, who underwent a psychiatric assessment in such setting. Patients who referred to the ER for other clinical reasons and patients with previous positive anamnesis for suicide attempts were excluded from the current analysis. The assessment of patients was performed by experienced psychiatrists with a clinical interview, including the assessment of suicidal intent: the chosen method to attempted suicide, isolation, precaution against discover, final acts in anticipation of death, suicide note, communication of intent before attempt suicide, seriousness of attempt, purpose of attempt and premeditation. The careful assessment of suicide intent through the interview allowed the clinical distinction between suicide attempts with an actual intent to die and those self-harming attempts performed on an impulsive basis. For each patient, a data sheet was filled in by the psychiatrist, in order to gather socio-demographic features, psychopathological data and psychiatric history, present clinical issues, type of acute intervention delivered to the patient and psychiatric admission rates. Psychiatric diagnosis was made in accordance with DSM-IV TR (American Psychiatric Association, 2000). Those subjects with repeated admissions to the ER for subsequent suicide attempts during the study period were classified as SRs.

We performed a descriptive analysis of the sample, reporting frequencies and percentages for categorical variables and using the chi-square test to assess any differences in the distribution of socio- demographic and clinical variables. All the statistical analyses were performed using STATA software MP11.

Table 1. Description of the sample according the suicide behavior

Axis I and Axis II diagnoses are described in Tables 2 and 3, respectively. 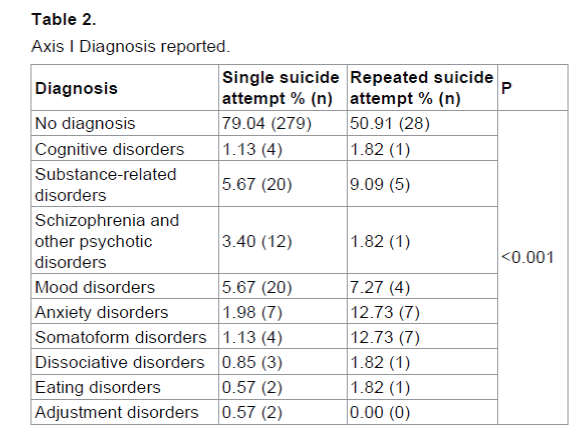 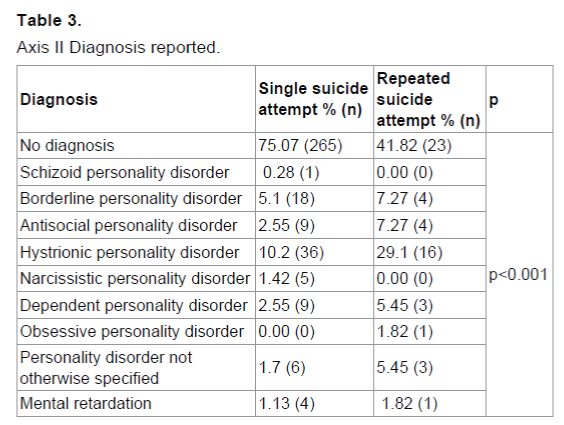 The comparison of SRs vs SSAs yielded the following significant results: SRs were significantly more common in female patients (p = 0.022), of Italian nationality (p = 0.000), single, as far as marital status is concerned (p=0.047). From a clinical point of view, patients with SRs were more likely than SSAs to have a history of psychiatric disorders (p=0.000), and to have already received a psychiatric diagnosis (p = 0.000). SRs more frequently had a history of previous admissions to the psychiatry ward (p = 0.000), and were more likely to be currently treated by psychiatric services (p=0.000) and taking psychotropic drugs (p = 0.000).

The outcome of the psychiatric consultation showed differences as well between the two groups of SSAs and SRs (p = 0.000); admission to the psychiatric ward was more common in SSAs, while discharge (on behalf of the clinician, after temporary clinical observation, or self-discharge), referral to outpatient or day hospital services were more common in SRs.

Overall, our results are consistent with the existing literature, anyway differences in the operational criteria to define SRs should be underscored. We considered as SRs those subjects with repeated admissions to the ER for subsequent suicide attempts during the study period. Of course this entails a limitation: we have only a 1-year follow-up for patients included in the study in the year 2014, and not 2-year follow-up data, considering that, as already underscored, most SRs happen within the first 1-2 years after the first, “index”, attempt (Scoliers, Portzky, van Heeringen & Audenaert, 2009). Another limitation is that we classified as SRs those patients who presented more than once to the ER for a suicide attempt, but data about repeated attempts which did not lead to the ER may have been underestimated or hidden by patients. We should underscore that intent to die of SA was defined according to clinical criteria and that no structured measure of suicide intent (for instance, the Suicide Intent Scale) was used in the ER setting. Although this may represent a limitation, nonetheless we should be aware that in clinical ER settings clinicians are often compelled to work without the possibility to use scales and clinical interviews (which are likely used afterwards, for instance if the patient is referred to the Psychiatry Ward. Moreover we can not exclude that SSAs went to other ERs or acute care settings for subsequent suicide attempts.

In our sample, as far as Axis I diagnosis is concerned, substance related disorders, anxiety disorders and somatoform disorders emerge as correlates of SRs, consistently with other studies (Mannin et al., 2012; Johnsson Fridell, Ojehagen & Träskman-Bendz, 1996). Anyway, we failed to find the correlation between SRs and depression described by Beghi and co-workers (2013). Regarding Axis II diagnosis, a higher frequency of histrionic, antisocial, dependent, and not otherwise specified personality disorder was found in SRs than in SSAs, as suggested by the literature (Johnsson Fridell et al., 1996).

Repetition of suicide attempts has relevant implications as far as the care of attempters is concerned, but regrettably current data fail to give actual and consistent predictors of repetition. The importance of studying the population of SRs lies in the fact that this may represent a distinct clinical population with specific needs as far as prevention and treatment interventions are concerned (Mendez-Bustos et al., 2013). For instance, our data suggest that the clinician-rated actual intent to die may be higher in SSAs than in SRs, and that the latter may be more likely to perform attempts on an impulsive basis.