Copyright: © 2014 Abduljabbar F, et al. This is an open-access article distributed under the terms of the Creative Commons Attribution License, which permits unrestricted use, distribution, and reproduction in any medium, provided the original author and source are credited.

Mineral trioxide aggregate (MTA) is a material that has been used in several clinical applications, such as apical barriers in teeth with immature apices, repair of root perforations, root-end filling, pulp capping, and pulpotomy. The aim of this clinical report was to describe successful revascularization procedure of an immature maxillary first premolar with apical periodontitis in a 10-year-old female patient. After preparing an access cavity, the tooth was isolated using a rubber dam and accessed. The canals was gently debrided using 5% sodium hypochlorite (NaOCl). And then MTA was packed into the canals. X-ray photographic examination showed the dentin bridge after the revascularization procedure. Thickening of the canal wall and complete apical closure were confirmed one year after the treatment. In this case, MTA showed clinical and radiographic success at revascularization treatment in immature permanent tooth. The successful outcome of this case suggests that MTA is reliable and effective for endodontic treatment in the dentistry.

Traditionally teeth with open apex are treated with calcium hydroxide apexification, which aimed at sealing the apex only without changing in the root canal wall [1]. The obturation after treatment results in a tooth that is liable to a fracture other than a tooth with a fully developed root. Mineral Trioxide Aggregate (MTA) has also been used to provide an artificial barrier. But it also has a limitation of non-reinforcement of root canal system. Recently, revascularization is a regenerative treatment and an alternative approach to treat necrotic teeth [2]. Various explanations have been given to clarify why apexogenesis/maturogenesis can occur in these non-vital immature permanent teeth. Unlike calcium hydroxide apexification, the advantage of revascularization is that it allows root maturation to continue by generating vital tissue [3]. Regenerative endodontic procedures are biologically based procedures designed to restore function to a damaged and nonfunctioning pulp by stimulation of existing stem and progenitor cells present in the root canal [4-6]. If the root canal of a necrotic infected tooth is effectively disinfected, regeneration should occur in the presence of a suitable scaffold [7]. The blood clot in the apical part of the canal can act as a scaffold and might also contain growth and differentiation factors, which might be crucial for successful proliferation and differentiation of stem cells [2,8,9].

A medically free 10-year-old female was referred from the dental emergency department (ER) of King Abdulaziz Medical City with slight swelling and pain related to a carious upper right first premolar. Upon clinical examination in the first appointment there was a sinus tract related to that carious tooth, thermal testing gave negative response, and electric pulp testing was also negative. Radiographically, the tooth appeared to have an open apex with apical radiolucency (Figure 1, 2, 3). No root fracture was detected. After administration of local anesthesia1.8 ml 2% lidocaine with epinephrine 1:100000 and rubber dam was placed for isolation, an access cavity was made and followed with pulpectomy. A trimix of antibiotics included metronidazole, ciprofloxacin, and minocycline was applied into the canals. The tooth was restored with Cavit as a temporary filling after application of cotton pellet. After 21 days the patient came for the second appointment, the tooth was asymptotic and the sinus tract disappeared. The root canal was irrigated with 5.25% Sodium Hypochloride and the blood was induced with #40 k-file (Figure 4). MTA was placed over the blood clot formed and a moistened cotton pellet was applied over the MTA; Cavit was placed as a temporary restoration (Figure 5). The third visit was after one week, the MTA was already set and composite was applied as a final build up restoration (Figure 6, 7). The patient shows up for follow up after one year at King Abdulaziz Medical City. The tooth was examined. There was no mobility, no pain and no sinus tract (Figure 8). Follow-up radiographs showed an elongation and thickening of dentinal walls. There was also apparently root end closure. The periapical radiolucency was also not present. Figure 4: A Radiograph revealing #20 k-file extending for the intentional bleeding. 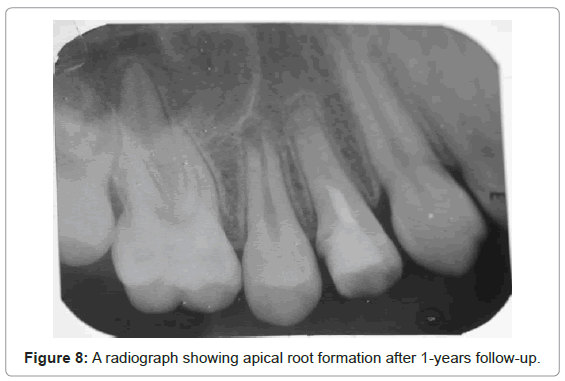 A healthy pulp is one of the most required factors for achieving a successful treatment of vital pulp therapy [10, 11]. A major challenge faced by most of the dentists is the treatment of thin, fragile open-apex canals in non-vital teeth. The duration between starting the treatment and traumatic exposure of the pulp is a mandatory factor during taking the medical history and clinical investigations. Otherwise, increasing that duration will lead to bacterial contamination and necrosis of the pulp. In the present case, many studies have shown successful end results with MTA in human teeth [12, 13]. The upper right premolar in this case report also clarified successful outcomes without any intervention for routine endodontic therapy. Many complications appear in necrotic pulp if left without any dental intervention to reduce number of bacterial contamination and avoid any infection. These complications might appear as tooth discoloration, facial swelling, pain or even fracture of remaining part of the tooth and, thus extraction of tooth might be the best solution at that time to avoid further systemic complications [14]. The routine endodontic treatment used for the treatment of necrotic open apex teeth has been calcium hydroxide apexification. Evidence based dentistry (EBD) show many disadvantage from using the calcium hydroxide during apexification pulp therapy such as bacterial contamination due to microleakage and longtime of the procedures [5,15-17]. Apical barrier of MTA and gutta-percha filling is currently the dentist’s choice and it has several advantages over calcium hydroxide induced apexification and the treatment can be completed in a single visit. However, it does not strengthen the dentinal walls. Revascularization has been used as an alternative treatment. If the endodontist apply all strategies of revascularization under high standard of infection control, regeneration have to appear as in this case report [7]. One of the mandatory three factors to start any regenerative medical therapy is the present of scaffold and here, the endodontist could use the blood clot as a natural scaffold that contain a lot of natural growth factors which are used as to differentiate the stem cells to desirable human cells [2,8,18]. EBD reveal that mixture of ciprofloxacin, metronidazole, and minocycline is considered as trimix antibiotic, which is significant against bacterial contamination [19,20]. In this fiction, the canal was irrigated and decontaminated with 5.25% NaOCl and filled with the trimix intra-canal antibiotic to disinfect the canals, and then Cavit acted as temporary dressing. After 5 weeks, the central incisor was asymptomatic. Here, we must consider the restoration between visits to prevent any salivary leakage and avoid any contamination [21]. From previous, we didn’t use final restoration as we use it in case of apexogenesis, which is recommended in many clinical studies [3,22,23]. In this case report, it appears the final outcomes of regeneration therapy. Apical closure without any apical radiolucency showed in the radiographs. In addition, root length and thickness was increased normally [24].

This result shows that the final result was saving the tooth and a successful outcome and healing without any further symptoms.

With the increasing clinical evidence, revascularization or regenerative technique may become a standard procedure for treating immature necrotic teeth. However, various treatment methods were used in many revascularization case reports, so further clinical trials are required to standardize a treatment modality. 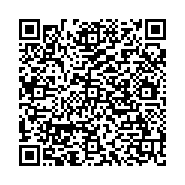