Copyright: © 2016 McGregor TB, et al. This is an open-access article distributed under the terms of the Creative Commons Attribution License, which permits unrestricted use, distribution, and reproduction in any medium, provided the original author and source are credited.

Laparoscopic donor nephrectomy (LDN) has been the preferred method of kidney donation since the technique was first introduced in 1995 [1]. The laparoscopic approach offered many benefits over open donor nephrectomy (ODN) including shorter length of stay, less post-op pain, quicker return to work, and similar donor and allograft outcomes long-term [2,3]. The decreased morbidity and improved cosmetics offered by the laparoscopic approach also attracted more donors and improved live kidney donation rates [4,5].

Left sided laparoscopic kidney donation has always been more preferable compared to right sided donation. The main reason for this has been the significantly greater length offered by the left renal vein compared to the short right renal vein. The longer length of the left vein facilitates an easier venous anastomosis in the recipient potentially decreasing recipient operative time and venous anastomotic complication rates, such as venous thrombosis [6,7]. Due to these concerns and despite many centers continuing to offer right sided LDN, significant reticence still exists regarding its use. For this reason we sought out to review our initial three year experience at laparoscopic donor nephrectomy to compare differences in left versus right sided approaches in terms of technical difficulty, donor outcomes and complications and allograft function.

We reviewed the clinic and operative reports on 72 consecutive LDN cases performed at our institution between May 2011 and July 2014. Of these 72 cases we identified 56 as left sided laparoscopic donor nephrectomy (LLDN) and 16 as right sided laparoscopic donor nephrectomy (RLDN). All patients underwent similar preoperative workup including assessment by both the surgical and medical transplant teams and abdominal imaging with CT-angiography to assess renal and vascular anatomy. We then compared these two groups regarding several peri-operative parameters, including: pre and postop renal function, intra-operative complications, postoperative complications, hospital stay, recipient operative time and complications and allograft outcome.

All donor procedures were performed by a pure laparoscopic technique with no hand-assist. All left sided donors utilized a threeport approach whereas right-sided donors required an extra 5 mm port for liver retraction Figure 1. Vascular control was performed using an endovascular stapler for both the artery and the vein regardless of the side. Kidneys were removed through a mini-Pfannenstiel incision regardless of the side of the kidney. Post-operative pathways were standardized and consisted of early mobilization and diet progression and pain control by patient controlled analgesia for 24 hours followed by conversion to oral analgesics. 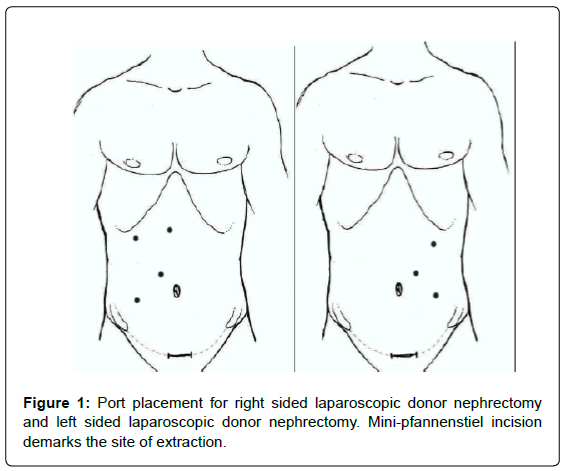 Our analysis included 72 consecutive LDN cases including 56 LLDN and 16 RLDN patients. Patient demographics are summarized in Table 1. There was no statistical difference in donor gender, age or BMI between LLND and RLDN groups. Reasons for selecting the right kidney for donation were: multiple left renal arteries (13 patients), calcification present at the take off of the right renal artery (1 patient) thereby leaving the healthier kidney with the donor, right kidney was smaller (1 patient) more suitable for a pediatric recipient and leaving the larger kidney for the donor, and an AML was present in the right kidney (1 patient) which was resected ex-vivo prior to transplantation. There was no significant difference in donor intraoperative and perioperative parameters including estimated blood loss (EBL), warm ischemic time (WIT) or length of stay in hospital (LOS), as summarized in Table 2. Mean donor EBL was 59.96 ± 11.45 ml for LLDN and 46.13 ± 14.95 ml for RLDN patients. Mean donor WIT was 2 minutes for both LLDN and RLDN patients. Mean donor LOS was 2.21 ± 0.08 days for LLDN and 2.13 ± 0.17 for RLDN patients. Donor postoperative complications included testicular pain (3 LLDN), nausea (1 LLDN), DVT/PE (1 LLDN), wound infection (1 LLDN, 1 RLDN), pneumothorax repaired laparoscopically (1 LLDN) and splenic laceration repaired laparoscopically (2 LLDN). All complications were Clavien-Dindo grade 1 or 2 (Table 3). There was no significant difference in complication rates between LLDN and RRDN patients (p=0.67). Donor creatinine at 6 weeks post-operatively was 111.70 ± 2.95 μmol/L for LLDN and 97.56 ± 4.64 μmol/L for RLDN patients and was significantly different (p=0.02), although clinically insignificant. 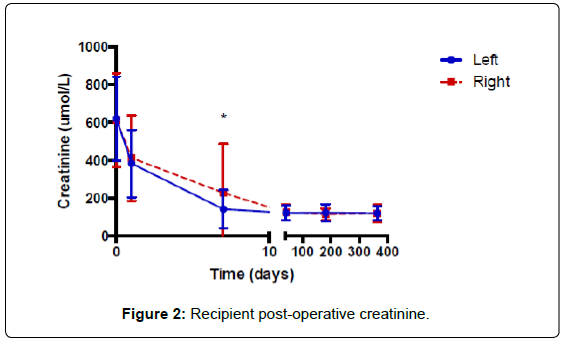 As the disparity between supply and demand for renal allografts continues to grow, the need to maximize the living donor pool is imperative. This translates into the importance of utilizing right-sided donors when anatomy or conditions contradict left sided donation. However, some centers still have reservations to procurement of rightsided kidneys laparoscopically, thus depriving right-sided donors of the benefits of laparoscopy (if done by open technique) or preventing that donor from contributing to the kidney pool (if the donor is turned down). Despite the perceived technical difficulties of RLDN our results show that RLDN appears to be as safe and efficacious as the historically favored LLDN approach; this is in keeping with reports in the literature that show similar results [4,6-7].

In our review we demonstrate that intra-operative and postoperative outcomes are similar regardless of the side of laparoscopic kidney retrieval. There were no significant differences in donor surgery parameters including similar EBL and WIT.

The post-operative outcomes were also similar, including no difference in the LOS and renal function at 6 weeks post-op for both right and left sided donors. Overall there were no major complications in either donor group and no significant difference in the complication rate between LLDN and RLDN.

Early on in the laparoscopic donor nephrectomy era, several groups reported higher complication rates and worse outcomes for kidneys retrieved from the right side. Specifically, reports of complications regarding the short right renal vein and vascular anastomosis were cited. In more recent series, including our own reported here, we did not notice any difference in complication rates or outcomes for kidneys retrieved from either side. Perhaps this change represents an improvement in the laparoscopic technique with time, and improvements in the laparoscopic instrumentation and technology. For example, improved energy sources and also stapling devices likely allow for easier dissection and management of the short right renal vein as it branches off the vena cava [8].

In our series the RLDN cohort all consist of a pure-laparoscopic technique while other series in the literature utilize a combination of pure-laparoscopic and hand-assisted. Although arguments have been made that hand-assist facilitates an easier right renal and caval dissection [9], we did not notice any hindrances utilizing a purelaparoscopic technique. Also, despite the extra port needed to perform the RLDN we did not notice any difference in peri-operative morbidity between the two groups.

In regards to the recipient outcomes, our series shows no difference in peri-operative parameters for the recipient, complication rate, and renal function outcomes. Specifically, recipients of kidneys harvested from the right side did not see more venous or vascular complications related to the short renal vein. Again, this is similar to other reports in the literature.

This study has inherent limitations, including its retrospective nature and the fact that it represents a single surgeon’s experience from a single center. However, the ability to perform a randomized controlled trial to look at left vs. right sided donors will never happen, and we feel this retrospective case series represents a real-life glance at the use of right sided kidney donors in an era were there still are some centers throughout North America with reluctance to perform right sided donors laparoscopically.

It is now clear that the gold standard for kidney donation utilizes a minimally invasive technique. Despite previous reservations in regards to the laparoscopic approach for right-sided kidneys, our series adds to the growing literature in support of the safety and efficacy of rightsided laparoscopic kidney donation.