Copyright: © 2016 Gorham-Rowan M, et al. This is an open-access article distributed under the terms of the Creative Commons Attribution License, which permits unrestricted use, distribution, and reproduction in any medium, provided the original author and source are credited.

Objective: To determine the effect of a vocal loading task on vocal function before and after 24 hours of thickened liquid use.

Methods: Seven healthy adults, ages 19 to 52 years of age, were recruited as participants. Baseline data regarding daily food/liquid intake and urine specific gravity levels (USG) as a marker of hydration were obtained. Participants then completed a vocal loading task, which consisted of 3 × 10 repetitions of a sustained vowel task at 65 dB to 75 dB SPL. Voice recordings and subjective ratings of vocal fatigue and muscle soreness were obtained prior to and following the vocal loading task for both the pre-thickened liquid and post-thickened liquid experimental session. The voice samples were analyzed for changes in fundamental frequency, loudness, and perturbation measures.

Conclusion: The objective and subjective changes reported by the participants’ post-vocal loading are consistent with prior reports concerning normal adaptive responses to greater vocal demands and increased muscular effort. A brief period of thickened liquids does not appear to affect vocal function.

Thickened liquids are the most frequently used compensatory interventions for individuals with dysphagia to reduce or eliminate their risk of aspiration [1-3]. Because of the increase in viscosity, thickened liquids travel through the oropharynx at a slower rate, which is thought to contribute to greater control of the liquid bolus and provides increased time to trigger the pharyngeal swallow. Improved control of the bolus provides additional time to complete the processes needed to close and protect the airway and reduces the possibility that liquid will enter the airway [1,4]. However, limited evidence is available to support the concept that the consumption of thickened liquids results in positive health outcomes with regards to pneumonia [5]. The available data suggest that thickened liquids may be beneficial for some individuals but not others. Logemann et al. [6] reported that while the use of thickened liquids reduced or eliminated aspiration in some patients with dementia, there were still a large percentage of patients for whom thickened liquids were ineffective. Rather, higher liquid viscosity was associated with an increased incidence of adverse outcomes, including a greater risk of aspiration pneumonia, longer hospital stays, and mortality [3]. Several reports have demonstrated that individuals who are placed on thickened liquid diets fail to meet minimum fluid intake requirements and thus are at risk for dehydration [7-9]. Patients often report that they don’t like the thickened liquids; they refuse to drink them which mean that they reduce their overall fluid intake [10]. Other possible factors to the reduction in fluid intake include the beverage preferences of the patient and incorrect preparation of thickened liquids [1,7,11].

The increased risk of dehydration has numerous implications for rehabilitative function, including that of voice production. Specifically, hydration status has been associated with alterations in phonation threshold pressure (PTP), which refers to the minimum lung pressure needed to initiate and sustain vocal fold vibration and may be used as a physiological measure of phonatory effort [12,13]. A number of studies have suggested that systemic dehydration increases vocal fold viscosity, which contributes to an increase in PTP and phonatory effort [13-15]. In contrast, hydration may lower PTP and improve phonatory function as shown in speakers following a vocally fatiguing task and in individuals with nodules and polyps [16,17].

Approval from the Valdosta State University Institutional Review Board was obtained prior to enrollment of participants in the study. Four female and three male speakers, 19 to 52 years of age, volunteered to complete the study. Participants were required to exhibit a normal voice quality, have no history of voice disorders, and be free from cold or allergy symptoms on the day of testing. Given that the protocol for the study included pre-experimental fasting sessions, physical exercise, and a potential change in liquid/food intake [18], precautions were taken to insure that the volunteers were healthy enough to participate in the study. Precautionary measures included establishing exclusionary criteria such as history of fainting, a history of high blood pressure, diabetes, hypoglycemia, cardiac disease, kidney or urinary tract problems, and/or a history of seizure disorder.

Each participant was also asked to provide a urine sample upon arriving for the experiment; this sample was used to measure urine specific gravity (USG) using a clinical refractometer (Atago, USA, Inc., Bellevue, WA). Measurement of urine specific gravity is frequently completed in research studies concerning the effects of hydration on athletic performance, and is considered to be a practical, noninvasive, and reliable parameter of hydration [19]. According to Casa et al. [20], the National Athletic Trainer’s Association recommends a urine specific gravity level of 1.020 g/ml prior to initiating exercise. This level was used as a benchmark of adequate hydration in the current study.

Acoustic recordings: Each participant’s voice was recorded prior to and immediately following the experimental voice tasks. Prior to the initial recordings, the participants completed a series of warm-up exercises that included five trials each of humming, glissando, and lip trills. Specific tasks that were recorded for subsequent analysis included sustained production of the vowel /a/ and reading of the first two sentences of the rainbow passage. Three trials of each task were obtained at a comfortable pitch and loudness level. All recordings were completed in a sound treated booth and were digitized directly into a desktop computer using the Computerized Speech Lab (Model 4500, KayPENTAX). A constant mouth-to-microphone distance of 6 cm was maintained using an ATM AudioTechnica omnidirectional headset cardioid condenser microphone. The pre-voice and post-voice recordings of the sustained vowels were analyzed for fundamental frequency (F0), vowel relative loudness level (RLL-V), and noise-to-harmonic ratio (NHR) using the MultiDimensional Voice Program software. The pre-voice and post-voice recordings of the rainbow passage were analyzed for speaking fundamental frequency (SFF), speaking relative loudness level (RLL-S), cepstral peak prominence (CPP), and the ratio of low spectral energy to high spectral energy (L/H ratio) using the Analysis of Dysphonia and Speech in Voice software.

Subjective ratings of vocal fatigue/muscle soreness: Participants were asked to rate the perceived level of vocal fatigue and muscle soreness prior to and following the vocal loading task using a 100 mm visual analog scale. These ratings were completed prior to the initiation of the thickened liquid protocol and repeated at the final recordings session.

Vocal loading task: After the initial recordings were obtained, participants were asked to sustain the vowel /a/ three times at a comfortable loudness for as long as possible. The average of three trials was determined in order to obtain the experimental phonation time (EPT) Seventy-five percent duration of EPT was calculated to determine the length of phonation for the experimental vocal endurance task [21], which was adapted from a vocal exercise described by LaGorio and colleagues [22]. The task consisted of 3 sets of 10 repetitions of the sustained vowel /a/ at 75% duration of EPT; all repetitions were completed at a loudness level of 65-75 dB SPL. Loudness levels were monitored continuously throughout the task using a hand-held sound pressure level meter (CEM DT-805) at a distance of 30 cm. Participants were given 5 seconds rest between each repetition, with 30 seconds rest between each set of 10 repetitions. Following completion of the third set of 10 repetitions, the participants’ voices were rerecorded in the manner previously described. The order of the recorded voice samples (/a/ vs. the rainbow passage) was counterbalanced across participants and between recordings.

Data analysis: A series of repeated measures ANOVAs were used to analyze changes in the acoustic and cepstral parameters pre-thickened liquids vs. post-thickened liquids as well as pre-vocal loading vs. post-vocal loading. Examination of changes in subjective ratings of vocal fatigue and muscular soreness were also completed using a repeated measure ANOVA. All analyses were completed using SPSS 16.0.

Demographic and physiological data are presented in Table 1. Six of the participants exhibited an increase in USG following the 24 hour period of thickened liquid intake, thus indicating a decrease in hydration [20].

Table 3: Mean and standard deviation (SD) data for the acoustic and cepstral data obtained from the Rainbow Passage pre-vocal loading and post-vocal loading according to thickened liquid intake. 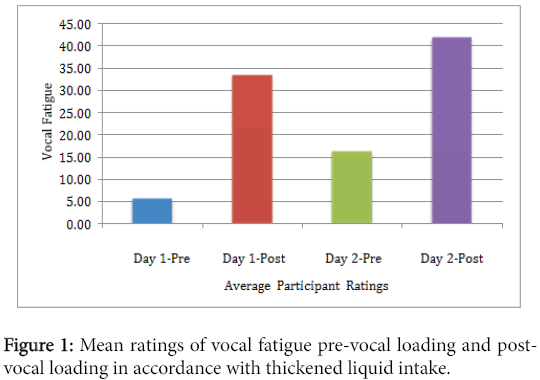 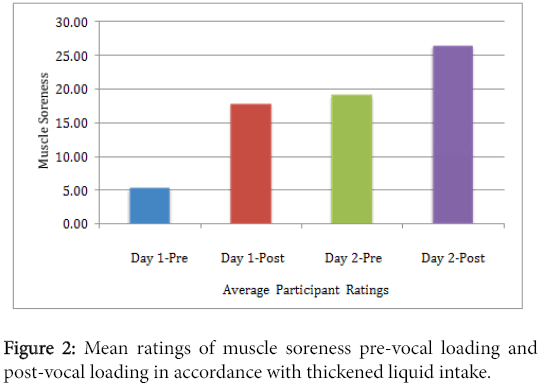 The objective of the current study was to determine if the use of thickened liquid affected vocal function. The results revealed an increase in RLL-V post-vocal loading, a change that is consistent with prior reports [23-25]. The increase in loudness following a vocal loading task represents greater vocal fold adduction as a compensatory response to the demands of the vocal loading task and is considered to be a normal adaptive response [23,24,26].

There was a significant increase in perceived vocal fatigue and muscular soreness post-vocal loading. The increase in fatigue may be expected, given the demands of the vocal loading task. The increase in muscular soreness is associated with a novel form of exercise [27] and has been previously reported in studies involving simulated vocal loading using neuromuscular electrical stimulation [28-30] of interest are the comments provided by the participants upon completion of the study. Five of the seven participants reported having one or more of the following symptoms: dry throat, sore throat, headache, increased difficulty when swallowing, slow/sluggish voice, scratchy voice, raspy voice, painful talking, dry lips, and reduced talking. These symptoms may be attributed to a reduction in fluid intake, as four of the participants reported drinking less fluid during the thickened liquid period. These findings coincide with prior reports of a decrease in fluid intake among dysphagic patients placed on a thickened liquid diet [8-10].

These data support the participants’ ratings of increased vocal effort and soreness after the thickened liquid period both prior to and following the vocal loading task. Systemic dehydration of the body, as well as superficial dehydration of the vocal tract, such as may occur through oral breathing or conditions of low humidity, contributes to increases in perceived vocal effort [14,34,35]. This increase in perceived vocal effort is likely related to an increase in PTP [34]. As previously discussed, reduced hydration contributes to an increase in vocal fold viscosity, thus decreasing mobility and increasing the muscular effort required to phonate [13].

The results of the current study did not demonstrate any significant effect of thickened liquid use on vocal function. These findings should be interpreted with caution, given the limitations of the study. One of the primary limitations was the small sample size used in the study. The inclusion of only seven participants is not large enough to be used for generalization. In addition, the participants in this study were all normal, healthy volunteers. The extent to which the use of thickened liquids may affect vocal function in patients with dysphonia and/or patients with dysphagia is not known. Sivasankar and Fisher [34] demonstrated that superficial dehydration of the vocal tract in dysphonic speakers was associated with greater increases in phonatory threshold pressure in comparison to non-dysphonic speakers. They suggested that this pattern was due to a reduced ability of the dysphonic speakers to compensate for the negative effects of dehydration. It is likely that individuals with a compromised laryngeal system may exhibit more significant vocal reactions to reduced fluid intake associated with thickened liquid use.