Copyright: © 2016 Al-Kazwini AT, et al. This is an open-access article distributed under the terms of the Creative Commons Attribution License, which permits unrestricted use, distribution, and reproduction in any medium, provided the original author and source are credited.

People living and working in buildings constructed from natural materials such as sandstone, concrete, calcite, gypsum, marble and granite are exposed to a surplus of background radiation from naturally occurring radioactive materials. The above materials contain naturally occurring radioactive elements such as potassium, radium, uranium, thorium and their progeny, which enhance the contribution to the ambient background radiation levels, consequently increasing the health risk. The unstable and hazardous radionuclides contribute remarkably to the level of background radiation in houses, schools and many other national institute buildings.
Radiation levels at various locations were measured on the main campus of the German Jordanian University (GJU), in the area of Mushaqar, South Amman, Jordan. Thermal Lithium Dosimeters (TLD) were placed in 22 offices in different buildings. Subsequently, the radiation doses from the TLDs were estimated, then, the weekly averages and annual doses were calculated. The results indicated that the total background radiation levels ranged between 2 mSv/year to 10.58 mSv/year with an average of 4.62 mSv/year. This average is higher than the background radiation averages for the city of Amman, the Royal Scientific Society (RSS) buildings and the worldwide average dose of 2.4 mSv/year for a human being (ICRP 1990). Furthermore, radiation levels at GJU were higher in the ground floor offices, which is consistent with natural background radiation behaviour in a multi-storey building.

The external exposure to ionizing radiation to the public during the course of work offers a vital estimation of the risks to health. Exposure to low levels of ionizing radiation for a long period may lead to tissue reaction, mutation and/or increasing the threat of malignancy. Naturally occurring radioactive elements like radium, uranium, potassium and thorium are found in natural building materials such as soil, sandstone, concrete, calcite, gypsum, marble and granite, all contribute to the increase in background radiation levels. This increase either comes directly from the above elements or their decay to the radioactive radon gas. Together with; soil, rocks and water basin under the buildings which are also expected sources of radon gas. Thus, the ambient radiation levels vary from place to place depending on location and height, as well as, type, amount and the source of the materials used [1-3].

The uranium and thorium in building materials utilized in Jordan are mainly associated with phosphate minerals and sandstone rocks. The uranium concentration ranges from 40 ppm to 250 ppm. However, the U and Th also occur in acidic granitic rocks and reach up to 400 ppm and 75 ppm, respectively; while Paleozoic sandstone rocks in the southern part of Jordan contain 400-460 ppm U3O8 and 30-370 ppm ThO2 [4].

Besides the naturally occurring radioactive materials the environment has been contaminated with manmade radionuclides used in health and industry or as a result of the aftermath of nuclear disasters such as, Hiroshima and Nagasaki (1945), Sellafield (1957), three MileIsland (1979), Chernobyl (1986) and Fukushima (2011). Historically, other significant factors of background contribution have been global over ground nuclear testing from 1948 until it was banned in 1963. However, it seems that the impact of the above factors has been minimal on Jordanian territory [5,6]. Traditionally most buildings in Jordan are constructed from sandstone rocks, concrete, limestone, granite and marble [7], most of these materials contain naturally occurring and manmade radionuclides such as, K (40), Th (232), U (238) and Cs (137) and their progeny. These radionuclides can be considered as a potential health hazarded as external sources of exposure [8,9].

This study focuses on measuring the background radiation in offices in the German Jordanian University (GJU) main campus in Mushaqarsouth Amman-Jordan. However, and for comparison, similar measurements were conducted at the Royal Scientific Society (RSS) premises in Al-Jubaiha area located in the northern part of Amman city.

The TLD’s in GJU were fixed in 22 offices in buildings A, B, C, D and E at the university premises. Buildings A, B and C are constructed of a variety of natural building materials such as; concrete, sandstone, limestone, granite and marble. They are modern multi-floor, centrally air-conditioned buildings, while buildings D and E are prefabricated, air-conditioned, ground level (GL) structures made mainly of concrete with gypsum partitions.

Each office was monitored using one TLD placed on a wooden desk, except office number 10 where two TLDs were installed; one on a granite sill (10 W) and the other on a wooden desk (10 C).

The TLD’s in RSS were placed in four different offices (Room 1-4). These rooms were located at ground level in a building constructed of concrete with natural ventilation.

All the TLDs at both sites were fixed at a height of 100 to 140 cm above the floor and were left for 4 weeks in order to collect the background radiation before dose readings were calculated.

In order to measure the radiation doses from the TLDs, a Harshaw 4500 Manual TLD Reader (Thermo Scientific, USA) was used and connected with PC and Nitrogen generator. The nitrogen generator was used in order to generate temperatures up to 300° C at 6 bar pressure. The TLD reader has 3 lenses to provide heat to the TLD crystals. The reading procedure starts with checking the nitrogen supply, closing the curtains and turning lights off to avoid any background light noise, then the TLD was placed inside the reader and the doses were read using special software (WinRems, Saint-Gobain Crystals and Detectors, Germany) [10]. The results were divided by four to give the average reading per week then multiplied by 52 to give an average exposure of the total background radiation per year:

Table 1 shows the measured background radiation levels in the surveyed GJU offices, the data indicates the variation in the readings amongst all floors. The results illustrate that the annual background radiation readings across the GJU campus vary significantly from 2.00 to 10.58 mSv, the readings vary within the same building. However, it has been found that most of the highest readings came from offices located on the ground and the first floor; whereas, in the upper floors the readings were significantly lower.

Table 1: The Background radiation at different locations at GJU campus. 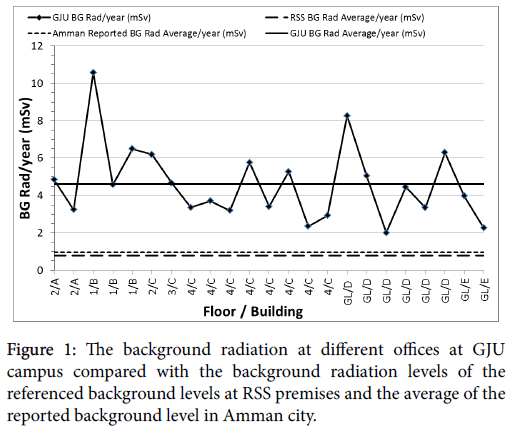 Even in certain locations in GJU, such as office number 3 on the first floor of building B(1/B) the reading is more than ten times higher than both averages (RSS and Amman city).

These differences in readings of background radiation levels can be attributed to the variation in the geological location and in the used construction material between the GJU buildings and the RSS building. Also continuously depending on air-conditioning in the modern building compared to naturally ventilated buildings results in higher background radiation levels. GJU buildings and RSS buildings are located above two different basins, the Dead Sea groundwater basin and the Al-Zarka groundwater basin, respectively [Water Authority of Jordan (WAJ) open files]; the Dead Sea basin is rich with radon gas [3,9,14] reported that the mean radon levels in Amman and Madaba have values of 39.52 ± 13.17 and 92.64 ± 41.79 Bq/m3, respectively, which are comparable to 1.97 ± 0.65 and 4.63 ± 2 mSv/year [13].

The high background radiation levels found in GJU buildings can be attributed to underground radon sources, building materials and lack of building ventilation [14].

Therefore, the background radiation in the Jordanian dwelling vary from one site to another depending upon the building materials used, type of building, ventilation and over which basin in Jordan they are located.

Further investigation is required for the purpose of assessing the health risks management [15] of the dwellers of GJU offices, there is a need for regular and periodic monitoring of the background ionizing radiation levels.

In order to minimize accumulation of ionizing radiation inside the buildings the GJU buildings should be naturally ventilated on a daily basis.