The Story of a Missing Tooth: A Case Report

Copyright: © 2014 Mehrotra V, et al. This is an open-access article distributed under the terms of the Creative Commons Attribution License, which permits unrestricted use, distribution, and reproduction in any medium, provided the original author and source are credited.

The displacement of an impacted third molar, either a root fragment, the crown, or the entire tooth is a complication that rarely occurs during exodontia. Although the complication is well known, reported cases in the dental literature are sparse. We report here an unusual accidental displacement of a mandibular third molar crown into the parapharyngeal space in an adult male patient. As a result if a complication does occur during third molar extraction such in our case, dentists should immediately refer the patient to an oral and maxillofacial surgeon and should not try to remove the displaced root without proper assurance. This is imperative for being able to evaluate the condition of the tooth preoperatively, select adequate instruments and technique, and take good care during extraction and prevent the risk of hemorrhage, neurologic injury, and further displacement of the tooth. Localization with images and proper surgical methods are the keys to retrieving the displaced fragment successfully. In combination with clinical examination, conventional and advanced radiographic techniques were utilized in order to locate the crown for retrieval surgery. This report not only describes the location, but also the surgical removal of an accidentally displaced mandibular third molar displaced in the parapharayngeal space, two weeks after first attempt of extraction.

Third molars tend to erupt relatively late and slowly, and disturbances associated with their eruption and position, for example pericoronitis and impaction, often arise in the second and third decades of life. These disturbances and their prevention are the major reasons for early removal of third molars [1]. Of the complications associated with third molar extraction, the most commonly mentioned have been dysesthesia, alveolar osteitis, infection, hemorrhage, fracture of the mandible, and damage to the adjacent teeth [2]. Accidental displacement of impacted third molars, a root fragment, the crown or the entire tooth, is a complication that occasionally occurs during exodontia. When the molar moves to the maxillary sinus the problem is not as serious as when it gets into the pterygomandibular or infratemporal spaces [1]. Although the complication is well known, reported cases in the dental literature are sparse. Mandibular third molars that are being removed may be displaced through the linguo-cortical plate and into the submandibular, sublingual or parapharyngeal spaces [3-6]. The main predisposing factor is the presence of a thinned or perforated lingual alveolar plate in association with mandibular third molars [7,8]. In addition, excessive or uncontrolled force, and improper manipulation and inadequate clinical and radiographic examination are important factors that can lead to tooth displacement [9]. A review of the published data revealed little information on the incidence, cause, and management of displaced tooth and root fragments [2]. The purpose of this article is to report a case of the displacement of the lower third molar into the parapharyngeal space during surgical removal.

A 37-year-old male patient reported to the Department of Oral Medicine and Radiology on 20th august 2013 with a chief complaint of reduced mouth opening and slight swelling on the right side of face. Patient’s history revealed, surgical removal of the impacted left mandibular third molar under local anaesthesia in a local private dental clinic 2 weeks before. The extraction process was problematic and required approximately 2 hours. During extraction, the tooth broke and fragments were removed. However, the tooth crown had disappeared. Considering the intraoral periapical radiograph taken immediately after surgery, it was believed that the crown had been removed with the roots. On examination patient had limited mouth opening, measuring about 26 mm (Figure 1) with mild swelling on the right side of face. On intra oral examination blanching was seen in relation to the buccal mucosa, hard and soft palate (Figure 1), and fibrotic bands were palpable all along the buccal mucosa and over the soft palate. A provisional diagnosis of oral submucous fibrosis was given and the patient was subjected to radiographic investigations to rule out if any fragment of the impacted mandibular third molar was left behind following the surgical extraction which the patient has undergone 2 weeks before. A panoramic radiograph showed the presence of fractured crown in the pertygomandibular region (Figure 2). Frontal and axial computer tomographic (CT) scan were obtained to determine the exact location of fractured crown in mediolateral and anteroposterior directions which showed that the fractured crown was located at anterior border of lateral pharyngeal space underlying the right tonsillar region (Figure 3 and Figure 4). Figure 1: Blanching in relation to the buccal mucosa and soft palate, and reduced mouth opening. Figure 2: Panoramic radiograph showing the third molar displaced. Note that this radiograph neither allow to plan the surgery nor to locate the exact position of the tooth. 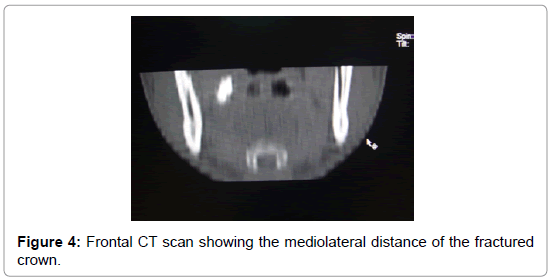 Removal of the tooth under local anesthesia via the lingual approach was preferred. The incision was made on the alveolar crest between the anterior edge of the ramus and lingual gum of the second molar. After reflection of the mucoperiosteal flap, the lateral pharyngeal space is reached with blunt dissection. In this area the tooth was determined at the horizontal position and removed carefully. The wound was closed with 3/0 silk suture material. The surgery was conducted in Department of Oral Maxillofacial Surgery and took approximately half an hour. The patient was discharged on the same day. Postoperatively an antibiotic (Capsule Amoxicillin 500mg thrice a day for 5days), non-steroidal antiinflammatory agent (Tablet Diclofenac sodium 75 mg twice a day for 5days), oral rinse (Chlorhexidine gluconate 0.12% twice daily for 1week, to be swished for 1minute), along with topical steroid (Triamcinolone acetonide to be applied topically 4-5times a day for 10 days over the buccal mucosa, soft palate regions) along with an antioxidant (capsule Antioxid once daily for 2 weeks) were administered. The antioxidants protects by physically separating the free oxygen radicals from the susceptible molecules. Providing molecules that effectively compete with the oxygen and thus rapidly repair the damage caused by the free radicals. On the 7th postoperative day it was seen that the swelling and trismus had improved and the mouth opening was 35 mm. No complications occurred postoperatively after 1month of follow up.

The incidence of complications associated with surgical removal of the third molar has been moderate (around 10%). However, trained experienced surgeons have had a lower incidence of complication than general dentists [10]. Fenestration of alveolar bone, a poor selection of surgical methods, and incorrect use of an instrument could be some factors resulting in accidental displacement of a tooth into the anatomic spaces. Uncontrolled force during the use of elevators has been reported as the most usual cause of these complications [2,10]. The displacement of non-erupted molars is repeatedly referred to in the literature, and surgical procedures for their retrieval may be very complex, especially if the molar gets into the pterygomandibular space or the infratemporal fossa when the complexity of the surgery required is often underestimated by the patient and not infrequently by dental specialists [1]. According to previous literature, it has been suggested to postpone surgery for several weeks in order to allow fibrosis to occur and stabilize the tooth in a firm position [3]. However, delayed intervention may increase the risk of infection and result in a foreign body reaction or tooth migration [11,12]. In the present case, surgical retrieval was decided because of the patient’s complaints resulting from an earlier complication. Besides, early surgical retrieval prevented the development of a possible serious infection. The clinician who made an unsuccessful attempt to extract the mandibular third molar could only remove root fragments. We speculate that the crown was pushed through the para pharyngeal space by the elevator at the time of tooth fracture. Although an intraoral periapical radiograph had been taken tooth crown was out of the imaged area. It is our belief that radiographic examination of all the tooth fragments to determine complete removal before closing the surgical site is of paramount importance. For this specific purpose, direct digital intraoral and panoramic systems may be utilized with the advantage of instant image acquisition at the time of surgery Panoramic radiography and lateral skull radiography were inadequate to obtain the exact location of the crown fragment. CT was utilized in terms of locating the crown, assessing the adjacent structures and guiding the surgical procedure. We suggest, tomographic images be obtained before retrieval surgery of displaced teeth or teeth fragments. Patients must undergo adequate and careful radiographic examination before and after removal of mandibular third molars. Clinicians should consider the possibility of displacement of a tooth or tooth fragment during mandibular third molar surgery and all persistent complications following an extraction should be investigated carefully [13].

In conclusion, when a tooth or root does get displaced, it is very important to recognize very early that such an incident has occurred and the patient should be explained and reassured about the complication immediately.