Complementary food is, infant formula or follow-on formula given to infants in a form of liquids, semi-liquids, and solids other than breast milk. Complementary foods must also be nutritionally adequate and provide the bio available nutrients required, in combination with breast milk, to meet all needs for growth and optimal health [1]. Since the nutrients in breast milk are generally more bio available than from other sources, breast milk remains an important component of nutrition after the introduction of solids [1,2].

Appropriate complementary feeding depends on accurate information and skilled support from the family, community and health care system [1]. Inadequate knowledge about appropriate foods and feeding practices is often a greater determinant of malnutrition than the lack of food [2].

Providing sound and culture-specific nutrition counseling to mothers of young children and recommending the widest possible use of indigenous foodstuffs will help for local foods preparation and safely in the home [3]. Initiate safe and nutritionally adequate complementary foods at 6 month is crucial to achieve optimal growth, development and health [4].

The world health organization has defined complementary feeding period as the period during which other foods or liquids are provided along with breast milk and any nutrient containing foods or liquids given to young children after exclusive breastfeeding is critical and adequate for the first six months of child [4-8]. The most crucial time to meet child’s nutritional requirements is the first two years of life [4,8].

Inappropriate complementary feeding practices remain as major public health problem in many developing countries intern many children are victim of the malpractice [4]. Less than one-third of 6-23 months old children met the minimum criteria for dietary diversity [8,9], and only 50% received the minimum number of meals and only 21% of children aged 6-23 months met the minimum criteria [9]. Infant formula supplementation at any age is uncommon in Ethiopia [10].

The recommended timing for the introduction of solid foods for infants varies between countries [11,12]. Due to the high prevalence of inappropriate child feeding practices and the importance of exclusive breastfeeding, the Ethiopian government developed the Infant and Young Child Feeding (IYCF) guideline in 2004 to prevent malnutrition [13].

Malnutrition has been responsible, directly or indirectly 10.9 million deaths annually among children under five. Most of the deaths are often associated with inappropriate feeding practices [12], lack of knowledge and skill about complementary feeding [12,13], lack of sufficient food (food insecurity) [4,8] and lack of timely initiating of complementary feeding [4,12].

This facility based cross-sectional study was conducted in Addis Ababa from 30th February to 20th March 2015. Addis Ababa is the administrative and business capital of Ethiopia with total population of 2.7 million during the 2007 national population and housing census. The city totally holds 13 government hospitals, 88 health centers and 760 private clinics [10].

d=Margin of error, assumed to be 5%

By considering 10% non-response rate the final sample size was 400.

In Addis Ababa city, there are 88 health centres, and 5 of them were selected by using simple random sampling techniques. Based on the number of clients/patients who visited each health centre during the previous one year, the total sample size was proportionally allocated to each selected health centres. Finally, interviewing of the mothers was carried out in each selected department/units as participants using systematic sampling methods by considering the 1st comers as starting point, and then every other at exit time.

After reviewing of the relevant literature, the questionnaire was adapted as appropriate to address the study objectives. Primarily the questionnaires were prepared in English and translated to local language (Amharic) and the Amharic version was used for interview.

Finally, five data collectors, who were diploma holders, know the local language, and resident of the study were selected to interview the mothers at the exit time from 30th February to 20th March 2015.

Intensive training for data collectors was given for two days. Continues supervision of data collection process was carried out to assure the quality of data. Finally, the collected data was carefully checked on daily basis for completeness, outlier and missing value as well as consistencies.

The collected data were cleaned, coded and entered into EpiData 3.1 statistical software package. The statistical analysis was done using SPSS version 20. Frequency distribution for selected variables was performed. The statistical significance and strength of the association between independent variables and an outcome variable was measured by bivariate logistic regression model.

A variable P value less than 0.25 was transferred to multivariable logistic regression model to adjust confounders’ effects and a p value less than 0.05 was considered as significantly associated in this model. Finally, the results of the study were presented using tables, figures and texts based on the data obtained.

The study was approved by the Scientific Ethical Review Committee of Addis Ababa University, and Addis Ababa health office. Informed assent was obtained from mothers after detailed explanation of the purpose of the study. Any involvement of the mothers was after their complete consent. Mothers were told as they would have the right to withdraw from the study at any time during the interview.

Time of initiation of complementary feeding 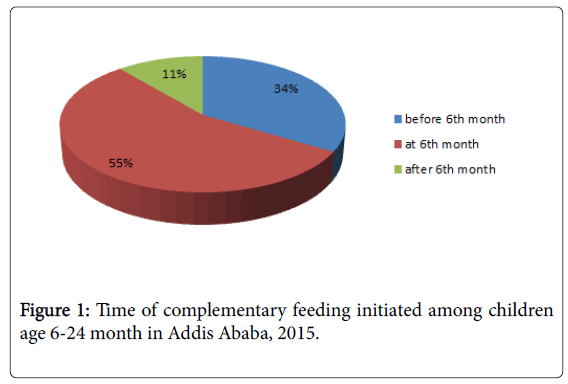 Occupational status of the mother is one of the determinants of timely initiation of complementary feeding. In this case, mothers who were employed were less likely to initiate complementary timely than unemployed mothers. This is consistent with a study conducted in Kemba, Mekele and Germany [20-22]. This may be due to unemployed mothers usually stay at home with their child and have sufficient time for frequent breast feeding and would not be obligated like employed mothers to wean their child early to go to work.

We would also like to express our appreciation to Addis Ababa University for funding, staffs of Addis Ababa Health department and each respondent for supplying us valuable information.

Author’s contributions: TY designed the study, collected and analyzed the data, and wrote the manuscript. EB, MY and YW participated in revision of the manuscript and data analysis as well as conceived the study and reviewed the draft manuscript. All authors read and approved the final manuscript.

Copyright: © 2016 Yeheyis T, et al. This is an open-access article distributed under the terms of the Creative Commons Attribution License, which permits unrestricted use, distribution, and reproduction in any medium, provided the original author and source are credited.