The empirical diagnose rate of Attention Deficit Hyperactivity Disorder (ADHD) in non-Western country is scant. This study determine the diagnostic rates of ADHD specific to age, gender, and subtype in children under 18 in Taiwan by examining national insurance claims data. 31,074 children (<18 years) having at least one outpatient visit with a primary diagnosis of ADHD in 2005 according to outpatient care claims data from the National Health Insurance Research database were included. Diagnostic prevalence of ADHD was 0.59%; fell in unexpected under-diagnosis of ADHD than 5% prevalence of ADHD from the nationwide community data. Only boys, aged from 6 to 11, ADHD combined subtyped are more likely to be diagnosed with ADHD. Under-diagnosis of ADHD among child and adolescent is an urgent child mental problem in one of Non-western country. Policy maker in Taiwan should design more educational program to improve the early recognition of child and adolescent with ADHD.

ADHD is quite prevalent neurodevelopmental disorder (Polanczyk & Rohde, 2007) with worldwide increasing prevalence estimated to be 5.29% (Polanczyk, de Lima, Horta et al., 2007). Since 1987, ADHD had been considered as a treatable disease (Olfson et al., 2003; Zametkin & Borcherding, 1989). The under-diagnosis and under-treatment of ADHD could be a marker of under-developed public child mental health care (Pescosolido et al., 2008). Chiefly because when many children with ADHD remains untreated in a society, they may grow up with pile of potential problem like developing offending, delinquent, antisocial behavior (Gudjonsson, Sigurdsson, Adalsteinsson, & Young, 2012). Such under-diagnosis problem might produce more social problem.

In non-Western country, under-diagnosis of ADHD is still a problem. Although local researcher found increasing number of people with ADHD sought treatment during 1999-2005 (Huang, Chu, Cheng, & Weng, 2014) or during 1996-2005 according to limited sample size from claim data (Chien, Lin, Chou, & Chou, 2012), but little account was taken consideration of “under diagnosis of ADHD problem” by definitely comparing the clinical administrative prevalence to presumed prevalence of ADHD in non-Western country like Taiwan. Local clinician quite emphasize under-recognition problem by their clinical experience (Tzang, Chang, & Chen, 2013). An approach is accordingly required which enable to use a huge sample sized claim data to prove under diagnosis of ADHD problem in one of Non-western country.

Most of previous studies administrative prevalence rate of ADHD was only specific to age and gender. There is no claim data publication based on subtype. ADHD was categorized into combined subtypes (ADHD-C), hyperactive–impulsive subtypes (ADHDHI), and inattentive subtypes (ADHD-I). Among them, ADHD-C subtype stand for more severe form in their symptom severity (Todd et al., 2002), more impaired in cognitivefunctions, neurological and behavioral profiles (Gaub & Carlson, 1997), more commonly noticed in boys than girls (Weiss, Worling, & Wasdell, 2003). The “cultural bias to girls” concept is prominent in non-Western country (Murphy, Tao, & Lu, 2011), such prejudice might lead girl in oriental society being less diagnosed. But more girls usually are less severe in their ADHD-I subtype. Up to this point, little is known about why girl ADHD is less diagnosed in such cultural bias place. Therefore, here we hypothesize that the low recognition rate among girls is the result of a less severe ADHD-I subtype of girl being and not the result of cultural bias towards girls.

The purpose of this study as determine the under-diagnosis of ADHD in Taiwan based on huge actual number of children with ADHD, also to test whether subtype issue resulting in lower recognition and treatment rates for girls with ADHD by using the outpatient care claims from the Taiwanese National Health Insurance Research database. In this paper we give diagnostic prevalence rate of ADHD not only according to age, gender, also to ADHD subtype. Such study findings may have a contribution to unravel the unknown situation of under-diagnosis of ADHD problem in Taiwan. It is hoped that this result will encourage child mental experts to be more vigilant of the unmet needs of children with ADHD in Taiwan.

The participants for this study were selected from the claim dataset from outpatient records retrieved from the National Health Insurance Datasets (NHIRD) released by the National Health Research Institute (NHRI) in Taiwan. The outpatient expenditure file includes general information of age, gender, one principal and two secondary ICD-9-CM diagnosis codes. All personal identifiers were encrypted by the Bureau of NHI before release to the researchers. Confidentiality assurances were addressed by following the data regulations of the Bureau of National Health Insurance., Institutional Review Board (IRB) approval was waived for this study.

This study examined children under the age of 18 with at least one outpatient visit and a primary diagnosis of ADHD (ICD-9-CM code=314: Hyperkinetic syndrome of childhood ). The search of the entire database yielded a final sample of 31,074 children who had sought care for ADHD symptoms during 178,138 outpatient visits between 1 January 2005 and 31 December 2005. The index was defined as the date when the 1st outpatient visit was sought for the treatment of ADHD during 2005.

The administrative prevalence of ADHD means who sought care for ADHD during 2005. The findings are expressed in number of patients per 100 children out of the total population in 2005.

First, the number of ADHD patients by age, gender, and subtype was described. The logistical regression was performed under assuming that age, gender and subtype entered as independent predictor variables for the dependent variable of stimulant use. All analyses were performed using the SAS/Stat system for Windows, version 9.13 (SAS Institute, Cary, NC). 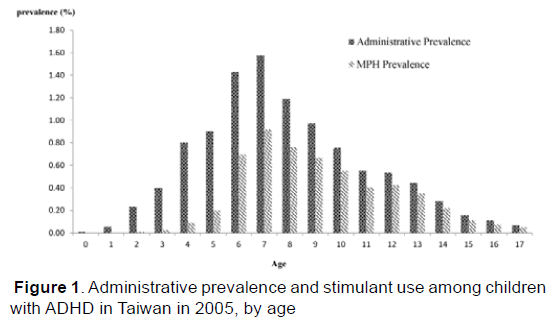 Figure 1: Administrative prevalence and stimulant use among children with ADHD in Taiwan in 2005, by age

Table 1 : Administrative Prevalence Among Children with ADHD in Taiwan in 2005 by Age and Gender

Table 2 : Administrative Prevalence of ADHD in 2005 by Disease Subtype and Gender

Table 3 : Logistic regression for any stimulant use

This study indicates widespread under-diagnosis (0.59%) of ADHD children in Taiwan using a huge and extensive database covering 31,074 ADHD children, baseline population representing 97% of the population in Taiwan in 2005. We demonstrates only more boys, school aged, characterized as combined subtyped ADHD children are more likely to be diagnosed with ADHD than girls, preschool aged children, and children with the ADHD-I subtype.

Accordingly in 1987 only 0.9% of children in The United States were diagnosed as ADHD (Olfson et al., 2003). But 20 years after then, in Germany 5% for children on 2003 (Schlander, Schwarz, Trott et al., 2007), in Netherlands 2.1% for aged 6–17 years on 2007 (Schlander et al., 2007) had increasingly being recognized as ADHD. But this study result presents only 0.59% of child and adolescent in Taiwan on 2006 is diagnosed as ADHD. Basing on the ground report, the prevalence rates of ADHD by community sample in Taiwan on 2001 is 5 %. Therefore, 27 years later after the fact ADHD is treatable disease, the result of administratively 0.59 % vs. theoretically 5% of children being diagnosed as ADHD seems implying that only one in twelve children with ADHD in Taiwan is diagnosed administratively. Therefore, there is “under diagnosis of ADHD” problem in one of non-Western country-Taiwan. The mental health work toward ADHD children should be more emphasized in Taiwan because the prevalence rate of ADHD on 1987 in The United States was already 0.9%. If in Taiwan on 2005, ADHD prevalence like 0.59% still remains 19 years behind The United States. Definitely the direct comparisons must be treated with caution because many cultural factors in both the US and Taiwan contribute to changes in diagnostic rates over time. However, these results are clearly very interesting and important with respect to how future policy making focusing on ADHD should be designed in Taiwan. Our study result implies to generalize to the extent child mental health care quality for ADHD and serve as a reminder to ADHD experts in Taiwan to be more vigilant in recognizing the unmet needs of children with ADHD to increase the diagnosing rate.

One of the purposes of this study is to find whether boys get more attention as a result of the more presence of a severe ADHD-C subtype. Our study result demonstrated no difference is existed about symptom severity among boy more tend to be ADHD-C subtype after we eliminate age and gender as confounding factors by logistic regression. A cultural preference of boys or other neurobiological differences to influence the symptom severity among boy and girl might contribute to the risks why boys receive more diagnosis than girls. In line with previous Western study or local study demonstrated, we found four times more school aged boys (1.66%) was diagnosed than girls (0.4%). But such result implied ADHD related expertise should pay more attention to the unmet needs of girls in Taiwan. Because researcher found there is a significant improvement on such gender discrepancy gap (Rowland et al., 2002; Vinker et al., 2006).

This study has several limitations which need to be taken into consideration, including the possibility that the overall quality of the claim data because many of the ADHD diagnoses for very young children were made by pediatricians and not child/adolescent psychiatrists. This could clearly impact the results on ADHD diagnoses or subtype. In addition, child psychiatrists in Taiwan usually make diagnoses according to DSM-IV criteria (American Psychiatric Association, 1994), but they are required to code their diagnoses under the ICD-10 administrative system. While the characteristics of the two systems are largely interchangeable, interpretation bias from resulting from different areas of expertise cannot be completely rule out. A second limitation is that there may be systematic variations between physicians/hospitals regarding the thoroughness and/or consistency of the documentation of associated clinical information. Thus, some variations noted in the distribution of the ADHD subtypes and co-existing diagnoses may reflect differences in overall clinical documentation quality produced within a particular care setting. Third limitation is reported diagnostic prevalence of ADHD in Taiwan by Hong et al. with big effort to collect 5000 more school aged ADHD children and adolescent from nationwide child and adolescent population, but result is not published in academic journal (Hong, 2001). But that study is performed under governmental study plan, so 5% diagnostic rate stand for the general ADHD diagnostic prevalence in Taiwan.

Despite these limitations, this study represents the first attempt to make use of a population-based claims dataset of a developing country as a means to gain a better understanding of lower administrative diagnostic prevalence of ADHD. This study suggest ADHD policy maker need to expand efforts for public acceptance of ADHD as Western country is (Charach et al., 2011) and increase awareness of the safety of stimulants such as long-action osmotic release oral system methylphenidate (Tzang et al., 2012; Wolff et al., 2011) especially more effort should be made toward girl, younger, ADHD-I children with ADHD. This study represents a cornerstone in regards to the design of effective strategies for improving knowledge about ADHD and proper drug management of ADHD in Taiwan.

All other authors declare that they have no conflicts of interest.