Copyright: © 2015 Sasikala S, et al. This is an open-access article distributed under the terms of the Creative Commons Attribution License, which permits unrestricted use, distribution, and reproduction in any medium, provided the original author and source are credited.

The physico chemical parameters of surface water in Tindivanam Taluk, Tamil Nadu, India were analyzed by APHA standards (2012). The surface water is one of the sources of drinking and household use water in this area and monthly variation of water quality parameters such as pH, Dissolved oxygen, TDS, Alkalinity, COD as well as trace amount of metal concentration were measured. This had led to indiscriminate actions, including dumping of wastes into the water washing and bathing in open surface water bodies. The analytical results indicated considerable variation among the analyzed samples with respect to their chemical composition. The result shows that the water quality of Tindivanam city is not good and there is an urgent need for the preliminary treatment of water before it is used for the drinking purpose. Sustainable water development in the city is needed to fulfill the demand of water for future.

In general surface water is preferred as a source of drinking water because of its convenient availability and its constant and good quality. However, the source is contaminated by several substances [1-2]. Substances that pollute the surface water can be divided as substances that occur naturally and substances produced or introduced by human activities [3]. Naturally occurring substances causing pollution of surface water include for example the deposition of dust, atmospheric process of evapotranspiration, by the natural leaching of organic matter and nutrients from soil, by hydrological factors that lead to runoff and by biological processes within the aquatic environment that can alter the physical and chemical composition of water [4,5]. As a result water in natural environment contains many dissolved substances and non-dissolved particulate matter. The natural quality of surface water depends upon the physical environment the origin and movement of the water. Water pollution is one of the most serious environmental problems in Tindivanam Taluk. The surface water qualities are affected by various anthropogenic activities. The surface water contains various contaminants such as turbidity, Dissolved oxygen, organic and inorganic impurities and pesticides [6-8]. These substances include household chemicals, agricultural chemicals some inorganic and organic contaminants. Due to this environmental persistence, these pollutants can cause contamination of surface water which is the main water resources of production of drinking water in Tindivanam Taluk; this area surface water becomes more and more seriously polluted due to disposal of domestic and agricultural runoff. At present study to analyze the water quality especially the presence of emerging contaminants from surface water that is used as a source of drinking and even for domestic and irrigation purpose [9,10] in Tindivanam Taluk, Tamil Nadu, India.

Water samples were collected directly from ponds in Thenkalavoy oorani, Tindivanam Taluk, Tamil Nadu. Using clean stoppered polythene bottles and labeled, it was preserved in a refrigerator. The analysis was carried out according to Water and Wastewater standards [APHA-2012] method for various physico-chemical parameters.

All chemicals and reagents used were of analytical grade and were purchased from E. Merck, India. Double distilled water was used to prepare all Calibration Solution. The pH and electrical conductivity were measured by using digital pH meter and conductivity meter. Alkalinity was measured by titrimetric method using standard sulphuric acid solution. Calcium, magnesium, chloride were measured by EDTA titrimetric method. Sodium and Potassium was measured Flame photometer. Sulphate and Nitrate values are measured by UVVisible spectrophotometer. COD analyses were performed by the dichromate closed reflux method. Turbidity was measured by using Nephelometry Turbidity meter [11].

Table 1 presents the monthly variation of physico chemical parameters of surface water of Tindivanam Taluk, Tamil Nadu. The surface water contains colour, odour taste and was slightly saline. The pH of the surface water in the study area is 7.4. The Electrical conductivity of surface water varies from 645 to 766 μs/cm. Higher electrical conductivity may be attributed to high salinity and high mineral content in the sampling points. High concentration of oxygen usually indicates good water quality. As the temperature increases amount of Dissolved oxygen decreases. The highest dissolved oxygen value was observed in surface water. The dissolved oxygen in water is best suitable ranging from 5.5-8 ppm. Turbidity refers to the water clarity. The turbidity value of surface water varies from 160 to 500 NTU. The surface water contains greater the amount of suspended solids in the water higher the measured turbidity. Temperature is important in aquatic systems because it can cause mortality and it can influence the solubility of Dissolved oxygen (DO) and other materials in the water column. Water temperature varies seasonally. The pH value between 6.5 to 8.5 indicates the good water quality. Natural acidity in surface water caused by dissolution of atmospheric carbon dioxide. Alkalinity is a related concept that is commonly used to indicate a system’s capacity to buffer against acid impacts. The alkalinity value varies from 220 to 190 mg/L. The Ca2+ and Mg2+ are important ions for Total hardness. In the study area the Ca2+ concentration varies from 40 to 36 mg/L. The Mg2+ in the study area varies from 21.6 to 8.2 mg/L. A Concentration of 30 mg/L is recommended for Mg2+ in drinking water. The chloride concentration in the study area varies from 130 to 156 mg/L. Nitrate is a major contaminant in drinking water. Water for agricultural purposes should be seasonally good for both plants and animals. The important parameter affecting the suitability of surface water in connection with irrigation purposes are electrical conductivity (EC) Sodium absorption ratio (SAR) sodium percentage and Residual sodium bicarbonate (RSC). SAR is computed by the equation

According to Richard’s SAR value is less than 10 it is excellent, between 10-18 for an greater than 26 is poor quality. The percentage of sodium is given by the equation

The RSC value is given by the formula

And for the water samples the values are between 1.25 to 2.4 meq/l. Which indicate marginal quality of water

Chemical oxygen Demand is an important parameter in water pollution control analysis. It is closely related to the organic contamination of water or wastewater sample. A permissible limit of COD in drinking water 10 ppm seasonally variation of COD concentration in surface water varies from 24 to 64 mg/l is shown in Figure 1. The water level is decreased from day by day. Hence the various organic and minerals concentration increased in the surface water. So the concentration of COD values also increased from 1st month to 3rd month. 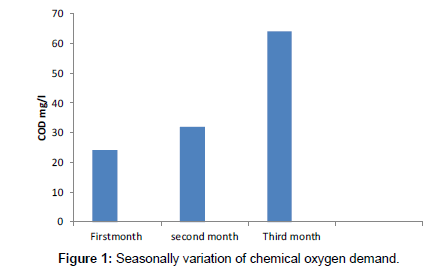 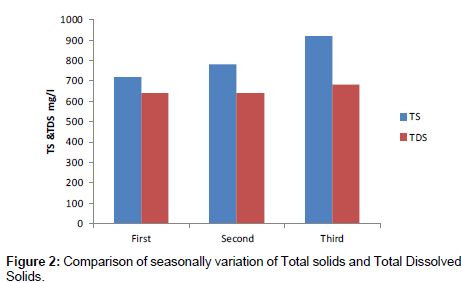 Electrical conductivity of the Surface water

Salination is an indication of the concentration of dissolved salts in surface water. The major Cations Calcium, Magnesium, Sodium, Potassium and the major anions Carbonates, Sulphate, Chloride are ions responsible for the salinity and conductivity of the surface water. The level of salinity in surface water is important to aquatic plants and animals as species can survive only within certain salinity ranges. Salinity is measured by comparing the dissolved solids in a water sample with a standardized solution. Electrical conductivity measures how well the water conducts an electric current that is proportional to the concentration of ions in solution. Evaporation of water from the lake and ponds then leads to the concentration of salt within the system. In dry period will lead to increasing the salinity and conductivity value.

Pathogenic or disease producing micro-organisms mostly originate from domestic wastewater. These include micro-organisms, which cause diseases of the intestinal tract. In an aquatic environment the die-off rate of E-Coli parallels that of pathogenic organisms. For these reasons E-coli has come to be used as an indicator for pathogenic organisms. E. coli is exclusively of faecal origin. Some coliform bacteria are normal inhabitants of soil and water. Results of bacteriological analysis therefore may be reported as total coliform and faecal coliforms. The presence of coliform in a water sample is determined by observing their growth in special culture media and making a statistical deduction their number. The results reported as most probable number (MPN)/100 ml. The surface water sources exceeds the acceptable limits of E-Coli.

The DO level in a surface water body is an important indicator of its health. The presence of DO in water is necessary for maintaining favorable conditions for growth and reproduction of a normal population of fish and other aquatic life. The absence of a low level of DO in surface water indicates pollution by organic matter is decomposed by anaerobic bacteria resulting in production of obnoxious end-products such as hydrogen sulphate, ammonia etc.

Wastewater including polluted surface water is one of the main causes of water-borne diseases. These include both communicable disease, non-communicable disease (such as those related to longterm chronic exposure to toxic substances) and water borne disease. The physico-chemical parameters of surface water samples indicate provide a precise picture of water quality additional water management flexibility and development of best management practices. Seasonally variation of physico-chemical parameters of water samples was analyzed. From these report most of the parameters did not meet the Indian water quality parameters. Particularly sulphate, nitrate, chloride concentration exceeds the acceptable limit. High value of COD concentration indicates the water is not suitable for drinking purpose without any pretreatment. But the surface water can be used as such for irrigation and domestic purposes. Awareness programs should also be organized to educate the masses for the conservation and management of surface water resources and the need to reduce of overuse and wastage of the surface water resources should be emphasized. Sustainable water development in the city is needed to fulfill the demand of water for future. Natural coagulants are used to remove all contaminants from surface water.