Why are Psychiatric Disorders in Children Becoming More and More Common?

In the last decades, an increase of new paediatric problems requiring medical care like eating disorders, behavioural and attention problems has been observed. Based on the hypothesis that mental illness is accompanied by autonomic dysfunction, we compared measurements of heart rate variability (HRV) in Holter ECG's from children with attention deficit/hyperactivity disorder (ADHD) with those of healthy children and a historical control from 1997. Method: We analysed the HRV parameters SDNN, rMSSD and pNN50 from 24 hours Holter ECG from children (mean age 10.8 years) with ADHD before or during medical therapy with methylphenidate (MPH). These values were compared with aged matched healthy children. Results: Compared to healthy controls ADHD children with and without MPH treatment showed significantly higher mean heart rates, lower pNN50 and lower RMSSD. pNN50 and RMSSD values of healthy children are lower compared to the historical control group from 1997. Conclusion: Compared to healthy children the peak of parasympathic activity measured by the HRV values pNN50 and RMSSD in early adolescence was reduced in children with ADHD. Compared to a historical control these values are also reduced in healthy children. A reduced vagal activity will - within the meaning of W. Porges polyvagal theory - have consequences on the social and emotional development of children. Moreover this observation may have consequences for an enhanced cardiovascular risk.

Why are psychiatric disorders in children becoming more and more common? This question haunts us pediatricians as well as many teachers not forgetting the affected parents.

Epidemiologic data, such as the number of admitted children and adolescents with psychiatric disorders as reported by the Statistics Center of Baden Wuerttemberg, Germany or the prescriptions of the psycho-active drug Methylphenidate (MPH) through the public health system show that this is not a subjective impression (Figure 1). A view on the diagnoses over 10 years depicts an increase of emotional and neurotic disorders in in-patients and a rise of attention deficit syndrome with and without hyperactivity (ADHD) cases treated with methyphenidate seen among out-patients. An American study from the Center of Disease Control clearly showed a comparable increase of ADHD cases by 21.8% between the years of 2007 and 2010 (Akinbami, Liu, Pastor et al., 2011). 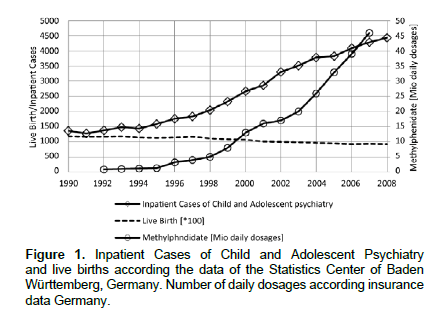 Figure 1: Inpatient Cases of Child and Adolescent Psychiatry and live births according the data of the Statistics Center of Baden Württemberg, Germany. Number of daily dosages according insurance data Germany.

However, the society shows little reaction to this “epidemic” of pediatric psychiatric disorders. It only comes to an emotional pro and contra discussion on the drug therapy of ADHD.

Choice Of An Appropriate Pathophysiologic Model

Why do experts hesitate to further investigate the causes of this increase in pediatric psychiatric cases in our modern industrialized society? In my opinion, this is mainly a methodological problem of most sociological studies. The “epidemic” of pediatric psychiatric disorders coincides with current demographic change and globalization. This implies that many influencing factors have simultaneously evolved and the scientist finds plausible arguments for a certain thesis leaning on his ideological background. In addition to that, finding an answer using methods of modern molecular genetics is unlikely as such a drastic genetic change within 10 to 20 years is not plausible. The attempt to explain the rise of psychiatric disorders as a result of an infection, nutrition or electromagnetic waves has repeatedly failed.

The most appealing method to me was the “polyvagal theory” as proposed by SW Porges (Porges, 2009). It showed that our autonomous nervous system does not only control the heartbeat and peristalsis but also our social and emotional behaviour. This mostly refers to the vagal efferences. As a pediatric cardiologist, I was familiar with Porges approach to measure the interaction between the brain and the heart by analyzing the heart rate variability (HRV). The 24-hour ECG as an absolutely non-invasive method is an ideal way of researching on this topic involving children. The heart rate variability analysis is well standardized and has been applied in various settings in all age groups. The respective norm values for adults (Bonnemeier et al., 2003; Umetani et al., 1998) and children (De Bock et al., 2013; Massin et al., 1997) are available. The analysis of the HRV using the 24-hour ECG allows an interpretation of circadian changes of the autonomous nervous system, as opposed to the short-time measurement of HRV. pNN50 is defined as the percentage of consecutive NN-intervals which differ by more than 50 ms. The parameter SDNN indicates the standard deviation of all NN-intervals within a measured period. It is influenced by both the sympathetic and the parasympathetic nervous system.

Initial Results Of A Pilot Study On Children With Adhd

Children receiving methylphenidate (MPH) for ADHD are seen by pediatric cardiologists on a routine basis due to the potential risk of cardiac dysrhythmia. Since 2005, I added 24 hour ECG to the normal apparative diagnostics consisting of ECG, measurement of blood pressure and echocardiography. The systematic analysis of the heart rate variability of 12 patients before MPH therapy and 19 patients of the same age group under MPH treatment revealed in 2010 surprising unequivocal results 7: Compared to healthy control patients, children with ADHD with or without methyphenidate treatment have a higher mean heart rate (85 ± 2/min versus 94 ± 2 /min, p=0.0051 and 90 ± 1 /min, p=0.035), a lower pNN50 value (10.3 ± 1.0 versus 3.4 ± 0.3, p=<0.0001 and 6.8 ± 0.7, p=0.008) likewise the RMSSD value (44 ± 2 versus 26 ± 1, p=<0.0001 and 37 ± 2, p=0.008). The circadian analysis of the HRV showed an extensive reduction of nightly vagal activity measured as sNN50 in children with ADHD prior to MPH therapy (Figure 2). These results, if confirmed by prospective studies, are of major clinical and pathophysiological significance. They show that the HRV analysis in 24-hour ECG can be used as an objective bio marker for ADHD. Moreover, it may serve to monitor methylphenidate therapy. 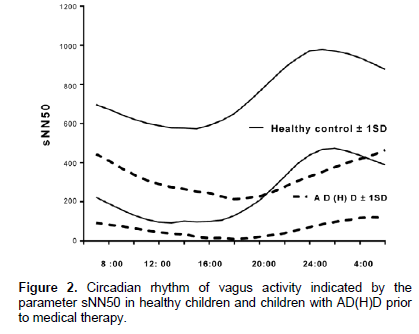 Figure 2: Circadian rhythm of vagus activity indicated by the parameter sNN50 in healthy children and children with AD(H)D prior to medical therapy.

Trend Of Heart Rate Variability Within A Lifetime

Figure 3 illustrates the regression curves of global heart rate variability indicated as SDNN and the vagal parameter rMSSD at the course of the life of a healthy human being from 0 to 90 years. The prominent increase of the vagal activity as from birth up to the age of fifteen years is typical of healthy children. There is a decline of HRV and vagus activity with age in adults with very similar data in the United States (Umetani et al., 1998; Zulfiqar et al., 2010) and Germany (Bonnemeier et al., 2003). 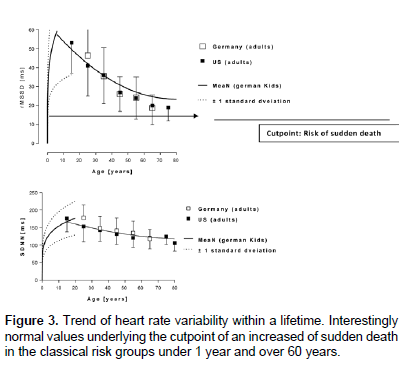 Figure 3: Trend of heart rate variability within a lifetime. Interestingly normal values underlying the cutpoint of an increased of sudden death in the classical risk groups under 1 year and over 60 years.

Referring to the discussion on sudden cardiac deaths under methylphenidate therapy, it is noticeable that adults with a rMSSD value below 15 ms irrespective of cardiovascular risks (Umetani, 118Singer, McCraty et al., 1998) have a significantly higher risk of sudden cardiac death. The rMSSD values among children with ADHD in our study, due to the missing increase of the rMSSD, lie just slightly above this risk zone. It is below the value of 15 ms in a few children in our study. It should therefore be noted that children with ADHD seems to have an increased baseline risk of sudden cardiac death. This risk was attributed in the study on this topic by Gould (Gould, Walsh, Munfakh et al., 2009) to the therapy with methyphenidate.

This statement is nevertheless based on mere pathophysiological speculations which refer to widely accepted theories on how the autonomous nervous system relates to sudden cardiac death (Vaseghi & Shivkumar, 2008).

On comparing the norm values of heart rate variability in childhood from the years 1995-1997 as collected by Massin (Massin & von Bernuth, 1997) with our values from the years 2010 – 2012 (De Bock, Jarczok, Hoffmann et al., 2013), it is remarkable that only the global HRV parameter SDNN lies within the normal distribution (Figure 4). In our control group it is however noticeable that rMSSD values lie in the lower part of normal distribution. Should this trend be confirmed by a larger study, then it has come, within the last decade, to a general decrease of vagal activity in childhood years. If this loss of physiological, pre-pubertal vagal activity will - within the meaning of the polyvagal theory according to Porges - have consequences on the social and emotional development of the children this correlation may not just be coincidental but possibly causal. 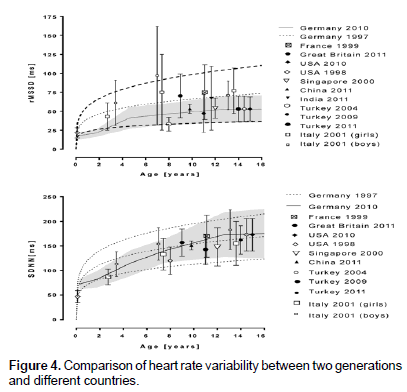 The attempt to explain fundamental changes in pediatric mental health with dysfunction of the autonomous nervous system is a bold hypothesis considering also that practical consequences are currently still unknown. Nevertheless, the chosen methodological approach offers the unique opportunity to find an objective answer to the urgent questions concerning the cause of psychiatric emotional disorders in children irrespective of ideological and educational concepts. Studies examining the effects of several different interventions on the HRV should also be referred to for this purpose:

1. Influence of nutrition, body mass index, and especially the substitution with Omega 3 fatty acids on the HRV

2. Influence of physical activity on the HRV

3. Influence of media consumption on the HRV

5. Influence of educational interventions on the HRV

6. Influence of relaxation and bio feedback exercises on the HRV

7. Influence of different family constellations on the HRV

8. Further research on the evident regional differences in the incidence of pediatric psychiatric disorders by using the HRV (field studies)

9. Influence of specific psychotherapeutic interventions, e.g., the neuro-emotional integration through eye movement desensitization and reprocessing (EMDR) on the HRV, in particular in children with posttraumatic stress disorder

10. Influence of pollution, phthalates, electromagnetic fields etc. on the HRV

Our data indicate a relationship of mental health in childhood and 24 hour heart rate variability measurements. As an objective, non invasive and low budget measurement, 24 hour analysis of heart rate variability is an optimal tool to investigate the autonomous nervous system in the growing number of children with mental disease independent from ideological background of the researcher.