Copyright: © 2012 Nazzal Z, et al. This is an open-access article distributed under the terms of the Creative Commons Attribution License, which permits unrestricted use, distribution, and reproduction in any medium, provided the original author and source are credited.

Food-borne infections are common and constitute an important health and economic burden globally. Among the factors responsible for this burden are centralization and globalizations of food supply, increasing microbial resistances to antibiotic and growth of immunosuppressed subpopulations [1,2]. Many studies indicate that most outbreaks of food borne acute gastroenteritis occur in places of mass feeding such as institutions, schools, restaurants, mess halls, and military units [3-9].

Non-typhoidal Salmonella is one of the most reported causes of food-borne infections [1]. Food products of animal origin (contaminated meat, poultry, eggs, and dairy products) are considered the most commonly identified source of Salmonella Infection [3,8- 13]. Eating undercooked eggs or meals prepared with uncooked eggs is a well-defined risk factor; in the last two decades, many Salmonella outbreaks related to raw or undercooked egg consumption have been reported in deferent parts of the world [1,3,14-16].

Salmonella bacteria are classified into different groups (B, C, D, and E); within each there are many serotypes. More than two thousands of Salmonella serotypes have been described and all of them are considered pathogenic. Amongst them; S. Enteritidis and S. Typhimurium are the most commonly reported [17].

During a holiday week, in Nov 2010 an outbreak of non-typhoidal Salmonella gastroenteritis occurred in Rass Laffan industrial city in the State of Qatar, where hundreds of thousands of labourers work in the gas and oil industry. Most of these labourers live inside the city in different camps. In one of these camps that mainly accommodate Filipino workers, about 300 workers developed signs and symptoms of acute gastroenteritis. Stool samples were collected from 6 case; all of which were positive for Salmonella group D. The present outbreak was investigated to determine its original source and to decide on its possible food vehicle to stop the current outbreak and prevent later ones.

Case definition: For the purpose of this epidemiological investigation we defined a case as “A person with diarrhoea (three or more loose stools during a 24-hours period) who has attended the Filipino Mess Hall (RLM2) in the five days after 16th Nov 2010”.

Case finding: The cases were found through the mandatory reporting of food poisoning disease by peripheral health services to the Communicable Disease Control and Prevention (CDC) department at the Supreme Council of Health (SCH) and by enquiry among the regional primary health centres and hospitals. Preliminary epidemiological investigation suggested that human infection with Salmonella was probably associated with the ingestion of food at the Filipino Mess Hall at Rass Laffan industrial city.

Case-control study: To determine if a particular food item was associated with the outbreak a case–control study was conducted. Of the total 300 cases, 85 were randomly selected to participate in the study. Besides, 85 controls were randomly selected. A control subject was defined as any person who is served by the Filipino Mess Hall and lives in the same campus with cases and who didn’t experience gastrointestinal illness.

A questionnaire was developed by the CDC investigation team to collect information on the outbreak. It included questions on personal characteristics, types of symptoms experienced, date and time of onset, duration of illness, and consumptions of different food items at the Filipino Mess Hall on 16th Nov. The meals eaten the day prior to the outbreak (16th Nov) were determined from the menu and all food items in these meals were included in the questionnaire. The interview was conducted on 24th and 25th of Nov by a trained Filipino Nurses. The same questionnaire was used for both cases and control.

We inspected the work process and food stores, catering hall, dishes and utensils, washing halls and accommodation and we took water samples.

Stool samples were taken from 6 patients and from all thirty one food handlers who are involved in preparing and cocking the food at the Filipino Mess Hall. Samples of the food served for the labourers were taken from the Filipino Mess Hall and were transferred to the lab for microbiological examination. Food samples included all leftover food of the three meals served on 16th Nov and random samples of the leftover food served on 17th, 18th, and 19th Nov. No leftover eggs were found from the day 16th Nov.

Data entry and statistical analysis were done using the SPSS version 17. Univariate analysis was carried out using a chi-squared test in order to investigate the association between the food items and the disease. As well, odds ratio and confidence intervals were calculated.

The total number of gastroenteritis cases in this outbreak was 300 among the approximately 1050 attendees, giving an overall attack rate of 28.5%. Majority of the cases were mild; less than 5% needed treatment with IV fluid, and none of them was admitted to hospital.

A total of 84 cases and 80 controls were interviewed during the investigation. All of them were male Filipino labourers. Their median age was 34 years (range: 22-58 years) with no difference between cases and controls. Table 1 presents the clinical complaints experienced by the cases. Diarrhoea seemed to be the most frequent symptom followed by abdominal cramps. None of the interviewed cases reported underlying medical condition.

Table 1: Prevalence of symptoms among cases.

The outbreak started late in the evening of 16th Nov and peaked midday day on 17th Nov and ended within 3 days of its start as demonstrated by the epidemic curve (Figure 1). The median incubation periodI was 15 hours; it ranged between 4 and 67 hours. The median illness duration was 3 days, ranged between 1 and 7 days (Figure 2). 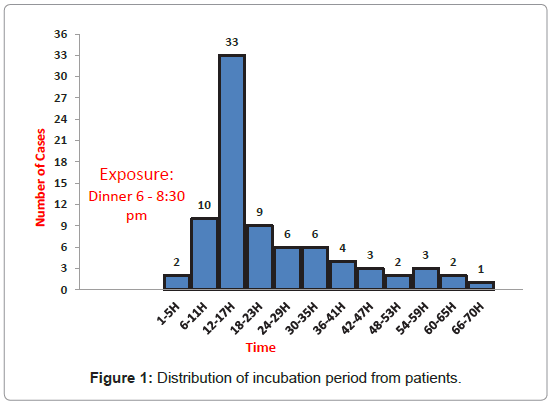 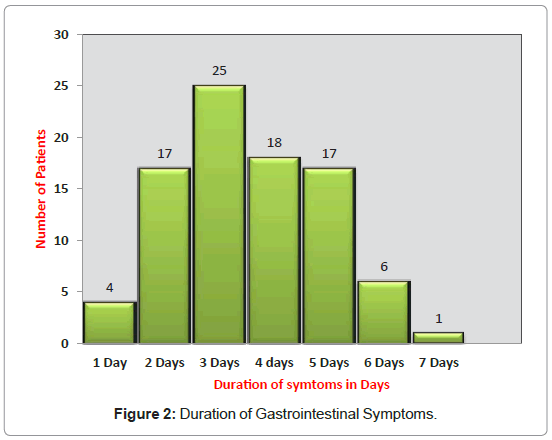 From the initial analysis, it was established that dinner (Rice, Beef, Vegetables, and Macaroni Salad) consumed several hours prior to the onset of symptoms, was the most likely source of outbreak. The probability of eating the dinner among the cases was much higher compared to controls with OR 42 (CI: 10-182). From the dinner menu items, ill persons (97.3%) were significantly more likely than well persons (27.3%) to report eating macaroni salad. The overall OR is 109 (CI: 25-484). Additionally, odds ratios of 7.6, 19.4, and 7.1 were observed with the consumption of rice at lunch time, rice at dinner time, and beef sticks at dinner time, respectively. However, a majority of labourers who consumed the rice and beef also consumed the macaroni salad at dinner time (Table 2).

Table 2: Comparison of Food exposure between cases and controls with Odds Ratio and Confidence Interval.

Based on our inspection, we noticed that personal hygiene was satisfactory and all food handlers had valid health certificates. However, the regular check up in Qatar doesn’t require the food handlers to do stool cultures. Water coolers were used for drinking water and tab water was used for food preparation and cooking. Water samples couldn’t be analyzed due to technical problems in transporting them.

Six stool samples from the cases were cultured for common bacterial gastrointestinal pathogens. All of these samples were positive for Salmonella group D. Thirty one stool samples from the food service workers at the Filipino Mess Hall were also collected for culture. Three of them were positive for Salmonella group D. None of the food items showed growth of microorganism. Further investigation into the preparation of the macaroni salad revealed that the chief cook used row egg while preparing macaroni salad; he used around 225 raw eggs, discarded the yolk and poured the egg white to complement the Mayonnaise of the Macaroni. This occurred 5 to 6 hours before serving the meal.

The outbreak of gastroenteritis, reported on 17th Nov 2010, was initially assumed to be a food-borne outbreak, caused by one of the common food-borne diseases pathogens. This assumption was based on the short incubation period and abrupt onset, symptomatology and the food consumption history. The epidemic curve and sharing of a common meal by a group were compatible with a common- source outbreak.

Description of the food causing the outbreak is essential when investigating an outbreak and detecting the pathogen in the suspected food is not always possible, in which case epidemiological methods are used to decide on the food that caused the outbreak [18].

In the outbreak reported here, the macaroni salad was prepared by adding huge quantity of raw eggs to improve the taste 5 to 6 hours prior to serving. The long interval between the preparation of the macaroni salad and the time the dinner was served made it possible for contamination and bacterial multiplication. It is recommended by CDC that foods with potential for Salmonella contamination shouldn’t be kept in the temperature range of 4.6 Co to 60 Co for more than two hours, to prevent bacterial growth [22].

Shell eggs have been reported as the source of many Salmonella food borne infection, both in developed and developing countries, which can be due to break down in any step from the egg production at the farm tell it is served to the consumer.

The findings of this investigation are subjected to certain limitations; the first that no eggs remained for testing, the second is the lack of the molecular analysis and typing of the Salmonella subgroups, and the third that taking the meal history many days later; subject it to recall bias.

In the preparation of food for large gatherings, care should be taken in the food preparation such as proper food handling, clean workplace and equipment and uncontaminated food products. As well, food should not be prepared long time before serving; if this not feasible, proper storage is necessary.

Food handlers must be taught that eggs can be harboured by Salmonella, cooked eggs rather than raw ones must be used while preparing the food and prepared food must be stored under refrigeration. In addition, samples of all food items used in the meal should be collected and stored.

Information obtained from the epidemiological and microbiological analysis led to the conclusion that the etiologic agent of this outbreak is Salmonella group D, and the most probable food vehicle of transmission is Macaroni salad. As well, it indicated that consumption of shell eggs, in particular raw eggs or food containing it, is a significant risk factor of Salmonella infection. It highlights the fact that excessive production of foods for holidays or special events, in the absence of necessary precautions, represents a potential public health threat. This requires that food handlers should be educated that intact fresh eggs can harbour Salmonella, foods made from eggs must be cooked, and prepared food must be stored under refrigeration.