Copyright: © 2013 Olaniyan TO, et al. This is an open-access article distributed under the terms of the Creative Commons Attribution License, which permits unrestricted use, distribution, and reproduction in any medium, provided the original author and source are credited.

A series of glycoprotein and glycolipids on red blood cell surface constitute blood group antigens. These are the ABO (A, B, AB and O) and Rh blood groups which are the most important blood groups despite the long list of several other blood groups discovered so far. The ABO and Rh blood groups vary worldwide and are not found in equal numbers even among ethnic groups. Therefore, this study was aimed at having information on the distribution of ABO and Rh blood groups among indigenes of FCT, Abuja, Nigeria. A total of 305 individuals were randomly selected among the indigenes of FCT, Abuja, Nigeria (Gwari, Bassa, and Koto). The blood samples were taken by cubital venipuncture and analysed using the agglutination method. 170 (55.7%) were males and 135 (44.3%) were females. In the ABO system, their blood groups were A 66 (21.6%), B 80 (26.2%), AB 15 (4.9%) and O 104 (47.2%). Rh-positive were 292 (95.7%) and Rh-negative were 13 (4.3%). Blood group O and Rh-positive had the highest frequency and blood group AB and Rh-negative had the least frequency. The results obtained were compared with previously published data. Some variations in frequencies were observed. However, apart from blood transfusion practise, it is imperative to have information on the distribution of these blood groups in any population group that comprise tribes and ethnic groups.

The origins and distribution of blood groups have given rise to a great deal of speculation and conjecture in scientific circles. Much study has been born as a result. Serological markers have served as important indicators for the understanding of genetic variation between and within population. This has been extensively studied all over world, providing valuable insight into the dynamics of population structure [1]. Blood grouping system in clinical practise is important because an antigen may in certain circumstances, react with its corresponding antibody and cause harmful clinical effects like haemolytic transfusion reactions and haemolytic disease of newborns [2], what we could refer to as blood incompatibility. There are about a total of 30 human blood group systems now recognised by the International Society of Blood Transfusion [3] but only the ABO and Rh systems are of clinical importance. The ABO system consists of four main groups, AB, A, B and O. In Rh system, blood groups are Rh-positive or Rh-negative on the basis of presence or absence of Rh-antigens on the red cell surface. The frequency with which blood types are observed is determined by the frequency with which the three alleles of the ABO gene are found in different parts of the world [4]. Variation in this allele frequency of the ABO gene reflects the social tendency of populations to marry and reproduce within their national, regional or ethnic group. As people throughout the world intermingle to a greater degree, the distribution of the different blood types will continue to become more uniform. There are racial and ethnic differences in blood type and composition. Most populations have migrated and mixed. Unfortunately, the reliability of the blood data for assessing relationships between population groups is very limited. This is mostly due to the lack of availability and interchange of this important data. Statistics are more important in modern medicine for many reasons. From time to time, it has been discovered that there are certain racial groups that are more susceptible to one blood disease or rare blood disease, blood disorder or blood inclusion than others [4]. So having adequate knowledge about one’s blood group can be very informative and will help improve the health status of people. Though studies have been carried out and published on several ethnic groups in Nigeria like Ogbomosho, Oyo State [5], Benin, Niger- Delta region [6], some other ethnic groups still have their statistics not known and this ignorance has led to high rates of mortality. It is to this effect that this study is being carried out among the indigenes of FCT, Abuja, Nigeria to determine if tribe and ethnicity was a factor that affects variations in blood groups since there are no published data regarding the Blood group and Rhesus factor among the indigenes of FCT, Abuja, Nigeria.

The research was carried out in the sub district and villages of FCT, Abuja, Nigeria. Reason being that Abuja being a Metropolis and a centre for all, concentration of the indigenes will be in the villages which include Kwali, Kuje, Dukpa, Paikon-Kore, Ujja, Paiko and Ungwan-Bassa. The target population for this study are the children, teenagers and adults amongst the indigenes of Abuja. Three hundred (305) individuals were randomly selected among the indigenes of the FCT, Abuja, Nigeria and were tested for ABO and Rh blood groups. This consists of about 135 females and 170 males. This study was carried out in Gwagwalada area councils in order to have the intended number of subjects (indigenes) for the research work. The blood samples were analysed at the Haematology Department of University of Abuja Teaching Hospital, Gwagwalada, Abuja, Nigeria.

ABO and Rh blood group determination: The blood typing was done on the basis of agglutination. The cubital of the subject was gently cleaned using a swab (methylated spirit soaked cotton wool) and the multi-sample needle was inserted on the tube holder and the EDTA bottle inserted under the holder. The blood samples collected from the subjects were emptied into the prepared ethylenediamine tetriacetic acid (EDTA) anticoagulant bottle to prevent clotting of the collected blood sample. A drop from each of the subjects was placed on a clean white tile in three different places as shown in figure 1. 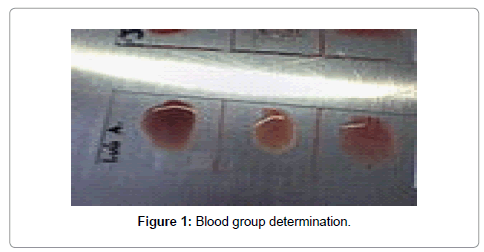 A drop of each of the antisera, anti A, anti B, and anti D was added and mixed with each blood sample, with the aid of glass rods. Blood was mixed thoroughly with the antisera and rocked gently for about 60 seconds to observe agglutination. In the case of doubt, the test was examined with a hand lens or the results were confirmed by reverse grouping using known group A and B red cells [7].

Agglutination observed on the middle tile shows that the antiserum used is the same with the antibody contained in the blood sample hence the blood group is determined (Figure 2). 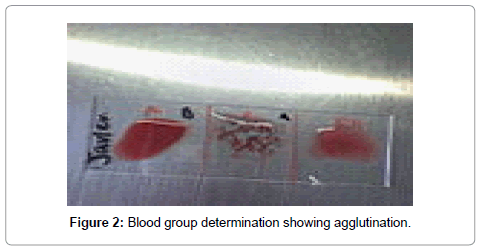 All data were analysed using the Statistical Package for Social Science (SPSS) software package 13. The distribution of different blood groups was compared between males and females using independent “t” test. In addition, the association of the different blood groups within the tribes and the distribution of blood groups obtained in the present study were determined using the one-way analysis of variance (ANOVA) with Duncan’s Post-hoc analysis. P-value of ≤ 0.05 was considered to be statistically significant.

Table 1: Shows the gender distribution of the subjects used in this study.

The frequency distribution of blood groups A, B, AB and O among the male and female subjects were shown (Table 2).

n= No. of subjects

Table 2: The frequency distribution of blood groups A, B, AB and O among the male and female subjects (P>0.05).

n= No. of subjects

Table 3: Shows the presence and distribution of RhD groups between the male and female indigenes of FCT, Abuja.

The result from this study showed that tribe had no influence on blood group distribution. During the study it was observed that there was a prevalence of intra tribal marriages and so, this may be a factor that affected the distribution of the blood groups among the individual used in the study. Great variation occurs in different groups within a given country, even a small country, as one ethnic group mixes with another by virtue of factors like marriage and so on. Blood types purity depends on migration, diseases, inter- relational reproductive opportunity, traditions and customs, geography and the initial blood type assigned [4] (Table 5).

Table 5: Shows Tribe-Sex or Gender Cross Tabulation of Subjects in this study.

The results of this study showed that blood group O was the highest with a percentage frequency of 47.2% followed by blood group B with a percentage frequency of 26.2%, blood group A as 21.6% and AB as 4.9% which is in correlation with the study made by [9], but blood group A and B was found with variation in the frequency of distribution when compare with the study made in Nigeria as a whole by [6]. This could be as a result of variation in sample size. During the study, it was also observed that there was a prevalence of intra-tribal marriages and so, this may be major factor that affected the distribution of the blood groups among the individuals used in this study. When blood types are 100% genetically inherited, the environment can potentially determine which blood types in a population will be passed on more frequently to the next generation. It does this through natural selection. Specific ABO blood types are thought to be linked with increased or decreased susceptibility to particular disease [10-12]. For instance, individuals with type A blood are at a somewhat higher risk of contracting smallpox and developing cancer of the oesophagus, pancreas and stomach [13]. Individuals with blood group O are at a higher risk for contracting cholera, plague, duodenal and peptic ulcers as well as malaria [14-16]. Therefore, there is a very high likelihood that the indigenes of Abuja are quite susceptible to malaria and the severity, to a large extent, will be more. From this study, Rh-positive had a larger occurrence with a frequency percentage of 95.7%. For the occurrence of Rh-factor in ABO blood group, O+ had the largest frequency percentage of 45.9% and the least percentage as B- and O- of 1.3% accordingly. There were about 7 females that were Rh-negative which may be due to the fact that over the years, the Rh blood group systems has been distributed among many population in such a way that the frequency of the RhD negative is very low since clinical situations could arise through Rh blood incompatibility. During this study, it was discovered that women most especially have faced one form of persecution or the other as a result of the destructive effect of Rh-incompatibility since they have lost children in the process. Similar pattern of distribution is also observed in other studies [8,17,18].

Publishing the ethnic and racial differences in blood types is not, in the present day world considered to be politically correct because citizens do not want their blood groups published and they see it as confidential. Some of the limitations encountered during the course of the study are due to the fact that: some of the villagers are illiterate and only understood their native languages, so it was difficult to communicate with them because of the language barrier. Secondly, Religious Belief and Trust and thirdly, Fear of unknown. All these factors pose as a barrier which made some of them to be reluctant in donating their blood as samples for the study.

The importance of the blood groups in regards to the health of an individual is enormous. Some blood groups are more susceptible to certain diseases than others; the information from this study will help in proper sensitization, medical diagnosis, genetic information, genetic counselling, prevention and treatment of certain disease that could be more prevalent and severe within this region like malaria. This will also contribute to the blood banking services and transfusion medicine in Abuja, Nigeria in order to avoid morbidity and mortality in both adults and children as cases of death arising from blood incompatibility and unavailability in blood banks have been increasingly alarming.