Copyright: © 2012 Ghosh R, et al. This is an open-access article distributed under the terms of the Creative Commons Attribution License, which permits unrestricted use, distribution, and reproduction in any medium, provided the original author and source are credited.

Litter production in mangrove has immense ecological importance, as it sustains both the planktonic and detritus food webs in the aquatic phase and intertidal mudflats, respectively. The present study was undertaken in the western and central sectors of Indian Sundarbans that are different in terms of physico-chemical variables (particularly salinity). Litter production was higher in the western sector owing to higher diversity of mangrove species in the selected plots. High salinity and wind action also accelerated the process of litter fall (both leaf litter and miscellaneous litter), and hence, the peak values of total litter, leaf litter and miscellaneous litter fall (except Sagar Island) was observed in premonsoon season, in both the western and central sectors of the study area.

Mangroves are taxonomically diverse group of salt-tolerant, mainly arboreal, flowering plants that grow primarily in tropical and subtropical regions [1]. A “mangrove” has been defined as a “tree, shrub, palm or ground fern, generally exceeding more than half a meter in height, and which normally grows above mean sea level in the intertidal zones of marine coastal environments or estuarine margins” [2]. The term “mangrove” can refer to either the ecosystem or individual plants [2]. Estimates of mangrove area vary from several million hectares (ha) to 15 million ha worldwide [3,4]. Mangrove ecosystems thrive along coastlines throughout most of the tropics and subtropics. These intertidal forests play important ecological and socioeconomic roles by acting as a nutrient filter between land and sea [5], contributing to coastline protection [6], providing commercial fisheries resources [7], and nursery grounds for coastal fishes and crustaceans. About 60% to 70% of the tropical coasts are covered by mangrove ecosystem. Mangrove vegetations sustain food webs in the adjacent aquatic phase and intertidal mudflats through litter production. Litter production is the shedding of vegetative or reproductive plant structures. Senescence, withering, death and other stresses, such as winds and precipitation govern mangrove litter production. As shown in Figure 3, mangrove litter production can vary from as low as 0.905 gm.m-2 day-1 to as high as 1.605 gm.m-2 day-1, depending on the seasons and physico-chemical conditions of the area. Variability in the production of litter from place to place may be attributed to climatic conditions and other factors, e.g. types of forest, sediment quality and available nutrients for the plant growth. Following litter production, decomposition and mineralization of detritus occurs, thus fertilizing the water in and around the ecosystem with high nutrients. Microorganisms [8], invertebrates [9-11], and fishes [12] have been reported to consume and help in mineralization. Thus, the role of mangrove litter in spinning the estuarine food web is beyond any debate and doubt. Quantification of litter fall through seasons and its relationship with ambient aquatic salinity has not been documented in the eastern part of Indian Sundarbans, although the area is one of the most biologically productive, taxonomically diverse and aesthetically celebrated ecosystems of Indian subcontinent, and is the only mangrove base of the Royal Bengal Tiger (Panthera tigris tigris) in the planet Earth.

In the present study, an attempt has been made to report the seasonal pattern and amount of litter production in mangrove swamps of Indian Sundarbans during 2012. Common physico-chemical variables like surface water temperature, salinity, pH, dissolved oxygen, wind speed and rainfall were also analysed and collected from secondary source (Indian Meteorological Department), simultaneously to determine the influence of these variables on litter production.

The Indian Sundarbans, a Gangetic delta at the apex of Bay of Bengal, has an area of 9630 sq. km and houses 102 islands. The western sector of the deltaic lobe receives the snowmelt water of mighty Himalayan glaciers after being regulated through several barrages on the way. The central sector, on the other hand, is fully deprived from such supply due to heavy siltation and clogging of the Bidyadhari channel in the late 15th century. The contrasting physical set up has made the mangrove ecosystem of Indian Sundarbans, an interesting study zone in terms of physico-chemical variables, which have great role in the growth and survival of mangrove species. Accordingly, our sampling stations were selected in the western and central sectors of Indian Sundarbans (Figure 1 and Table 1), primarily on the basis of salinity. Litter fall was determined by setting 2 rectangular traps (3 m×3 m) in all the 5 randomly selected plots (10 m×10 m) in each station. Thus, materials were collected from 10 traps to get a representative picture of each station. The traps were made of 1 mm mesh size nylon screen through which rainwater can pass [13]. They were positioned above the high tide level [14], and contents of all the 10 traps were collected from each of the selected stations and brought to the laboratory in every month during 2012. The collected litter was segregated into leaf litter and miscellaneous litter (comprised of twigs, barks, fruits, stipules etc), dried at 80 ± 5°C, and weighed to get the proportions of major components in the total collections. Finally, the mean weight per plot was estimated and transformed into gm.m-2 day-1 unit.

Hydrological parameters, such as surface water temperature, salinity, pH and dissolved oxygen were analyzed as per the standard methodology outlined in Strickland and Parsons [15]. Data on rainfall and wind speed were collected from the Indian Meteorological Department of nearest monitoring station at Canning.

The mangrove ecosystem of Indian Sundarbans sustains 34 true mangrove species and several associates, which nourish the adjacent waterbodies and intertidal mudflats through contribution of litter and detritus. The tidal flushing at regular interval of time washes out the litter from the intertidal mudflats to estuarine systems (Figure 2), which on decomposition produces nutrients (nitrate, phosphate, etc.) that compose the biomass of phytoplankton. The total litter fall pattern in all the sampling stations of the study area exhibited a unique seasonal variation (Figure 3), with highest value during premonsoon (March- June) and lowest during monsoon (July-October). Station wise the litter fall values (mean of three seasons) varied as per the order Henry’s Island (1.392 ± 0.151)>Sagar South (1.343 ± 0.225)>Chemaguri (1.261 ± 0.188)>Gosaba (1.152 ± 0.253)>Canning (0.942 ± 0.198). Figure 2: Mangrove litter washed away by tidal action in the aquatic system. 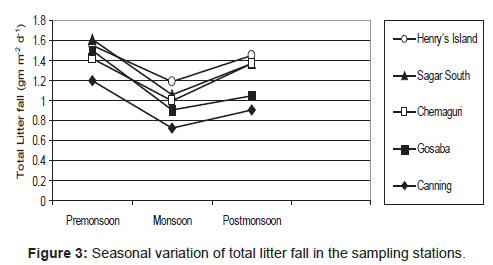 Peaks of leaf (Figure 4) and miscellaneous (Figure 5) litter coincided because the flowering season in Sundarbans mangrove is mostly restricted during Premonsoon [16] (Table 2). The total litter fall peak coincided with the period of high wind speed in Indian Sundarbans (Figure 6). Similar pattern of litter production was reported in a number of mangrove studies [17-20]. Leaf production was found to be continuous throughout the study period, which suggests that the environmental conditions are favourable for leaf emergence all year round, and the stress does not appear to limit the leaf production in the present geographical locale which shows that they are evergreen forests. Similar trends were also observed by a number of researchers, while working on the mangrove systems [21,22]. 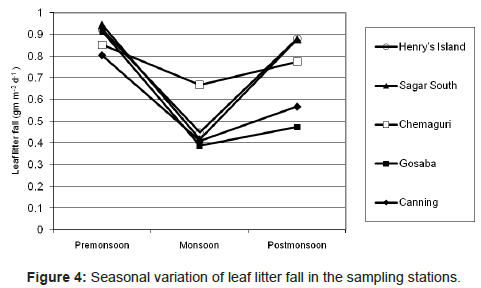 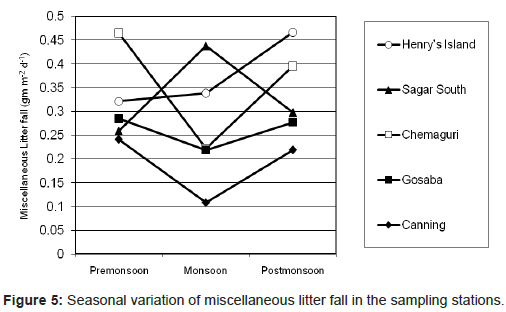 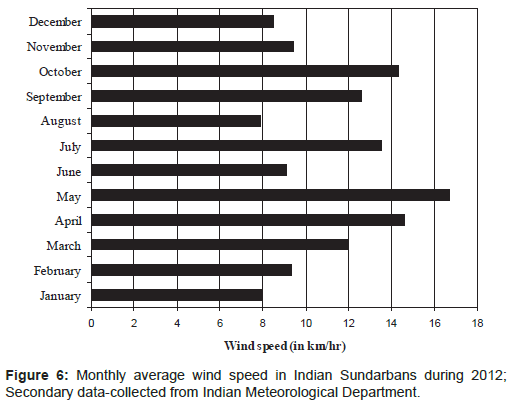 Table 3: Composition of mangrove flora in the selected stations.

The physico-chemical variables of the sampling stations (Table 4) seem to exert a regulatory influence on mangrove litter production in the present geographical locale. Significant positive correlations of litter fall rate with wind velocity (r=0.597; p<0.05), and salinity (r=0.699; p<0.01) were observed, which confirm the premonsoon season as the peak season of litter fall in the study area. The premonsoon season in this part of the subcontinent is characterized by Nor’westers and occasional torrential rain (Figure 7), which induce the falling of leaves, flowers and fruits and breaking of twigs contributing to total litter production. High surface water temperature and salinity accelerate litter fall by posing physiological stress to mangrove species, as stated by several researchers [29,30].

Table 4: Monthly variation of physico-chemical variables at the sampling stations. 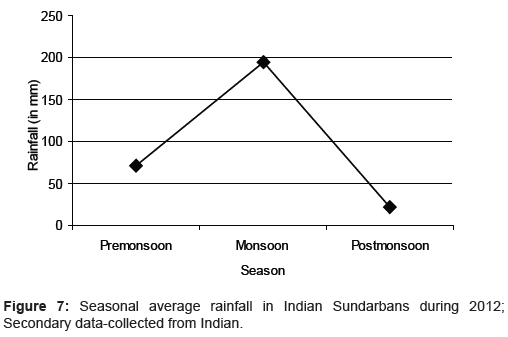 Litter production in mangrove system and its transportation to adjacent waterbodies by tidal action has immense ecological importance, in terms of sustenance of both detritus and planktonic food webs. Quantification of litter biomass through season is, therefore necessary to understand the magnitude of energy flow through various members of the trophic level in the Sundarbans mangrove ecosystem.