Copyright: © 2011 Sudharsan S, et al. This is an open-access article distributed under the terms of the Creative Commons Attribution License, which permits unrestricted use, distribution, and reproduction in any medium, provided the original author and source are credited.

The octadecanoic acid (OA), methyl ester was isolated and characterized from root of fenugreek (T. foenumgraecum) using ethyl acetate (EAC) in hydroponics method. The OA was characterized by TLC & HPTLC and purified by HPLC. The structure and molecular weight (298) of OA was confirmed by GC-MS. The Rf value of sample (peak 4) was matched with standard. OA has strong anti-bacterial activity in B. subitlis and P. aeruginousa, where as weak activity in S. aureus and E. coli. Among the tested concentration of in vitro anti-oxidant activity of OA was maximum in 40Âµl and minimum in 20Âµl.

In recent years, there has been gradual revival of interest concerning the use of medicinal and aromatic plants in developed as well as in developing countries, because plant derived drugs have been reported to be safe and without side-effects [1]. Thus, there is a pressing need for new plants-based fenugreek (Trigonella foneum-graecum L.) is an annual dicotyledon plant belonging to the family Papilionaceae Leguminsae and is thought to be originating in India and Middle East. The seeds contains sapogenins, isoleucine and galactomannan, which have been shown to exert beneficial health effects, specifically in diabetic and hypercholesterolemic animals and humans [2]. Among the potential active components of fenugreek seeds is galactomannan (GAL), which is a guar representing approximately 50% of the seed weight [3] Due to its strong flavor and aroma fenugreek in one of such plants whose leaves and seeds are widely consumed in Indo-Pak subcontinent as well as in other oriental countries as a spice in food preparations, and as an ingredient in traditional medicine. It is rich source of calcium, iron, β-carotene and other vitamins [4]. Both leaves and seeds used in normal diet of family, 3 especially diet of growing kids, pregnant ladies, puberty reaching girls and elder members of family because they have haematinic value [5]. Fenugreek seed is also used as a galactagogue by nursing mothers to increase inadequate breast milk supply [6].

At present most of the recombinant proteins and valuable nature products extracted from plants by using different solvents, which is used as fine chemicals, pharmaceuticals, crop protection compounds, cosmetic ingredients, etc. This method requires more expensive and purification steps for the extraction active ingredients from complex mixtures of organic molecules and proteins [7]. Science needs an alternative technique which is used as a large scale production of active metabolites from the plants and this could be less expensive. Hydroponics is a technology for growing plants in nutrient solutions without the soil. The method is developed for the large scale production of recombinant proteins [8]. Thus, we turned our attention to isolate of the root exudates from T. foneum-graecum by using hydroponics technique. The present study has been focused to isolate octadecanoic acid (OA) (methyl ester) from T. foneum-graecum, confirmed the presence of OA in root of T. foneum-graecum by TLC, HPTLC and HPLC. Finally the presence of OA is confirmed by GC-MS. The antioxidant and anti-microbial activity of OA was also tested by in vitro.

Plant material and extraction of OA

T. foenum-graecum seeds were collected from local market of Chennai, Tamil Nadu, India. Extraction of OA was carried out by the protocol of Schlesier et al. [9] after suitable modification. Dried fenugreek seed (100 g) was sterilized by using 1% sodium hypochloride for 2-3 min and soaked in 200 ml distilled water for overnight. These seeds were spreaded in loamy soil and allowed to the formation of sprouts. These sprouts were transferred to hydroponics 4 device which contains 100 ml distilled water. Hydroponics medium was left into 7 days at 24°C. After the incubation periods, the sample was extracted using EAC as a solvent and it was concentrated by rotator evaporator at 45°C (Lark, India). The hydroponics medium was drawn out and stored at 4°C for further analysis.

Post-chromatographic characterizations for the ethyl acetate extract were done by HPTLC. 20 µl solution of extract was spotted on a 10 x 10 cm size pre-coated silica gel 60254 TLC plate using CAMAG Linomat IV automatic sample spotter. The plate was developed in solvent system (85:15) and dried at room temperature. The plate was scanned using CAMAG; TLC scanner II at UV 540 nm and the densitogram was obtained, which recorded the Rf value, spectra and peak area of the resolved bands. The mean peak area of three injections (20 µl at each time) was used for qualitative analysis of OA in the root extract.

The extraction and quantification of OA was done following methods described by [10]. HPLC analysis was performed on a C-18 column (Bondapack, internal diameter 300 mm x 3.9 mm) under isocratic conditions using acetonitrile/water (65:35, v/v) adjusted to pH of 2.5. OA was detected at 254 nm and its retention time was compared with that of standard OA (Sigma). OA was isolated from the root extract by silica gel column chromatography and its identity was checked by comparing its melting point (determined by Toshniwal Apparatus) and mass spectrum. Samples for which data presented were extracted and analyzed in triplicate with an average variation of ± 0.001 in the percentage OA content determined.

This was carried out on a Shimadzu GC–MS instrument (Shimadzu Corporation, Kyoto, Japan) equipped with a GC-17A gas chromatograph and provided with a DB-5 (J and W Scientific, 91 Blue Ravine road, Folsom, CA, USA) capillary column (5%-phenyl)- methylpolysiloxane, length, 30 m). The operating conditions were: column temperature programmed from 140 to 280°C at the rate of 4°C/min, held at initial temperature and at 200°C for 5 min and further to 280°C at the rate of 10°C/min, held at final temperature for 10 min; Injector and interface temperatures, 210 and 280°C, respectively; carrier gas helium (flow rate, 0.9 ml/min); ionisation voltage, 70 eV; electron multiplier voltage, 1 kV. Samples (10 µl) were injected in the splitless mode. Peaks were identified by comparing their mass fragmentation pattern with that of standard compounds as well as from the data available in the spectral library (Wiley/NIST Libraries, Shimadzu Corporation, Kyoto, Japan) of the instrument.

Free radical scavenging activity of hydroponics ethyl acetate extracts of the roots of T. foenum-graecum was determined by the DPPH assay described by [12]. The capability to scavenge the DPPH radical was calculated using the following equation [13]. 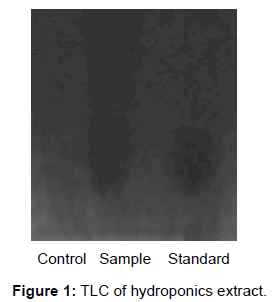 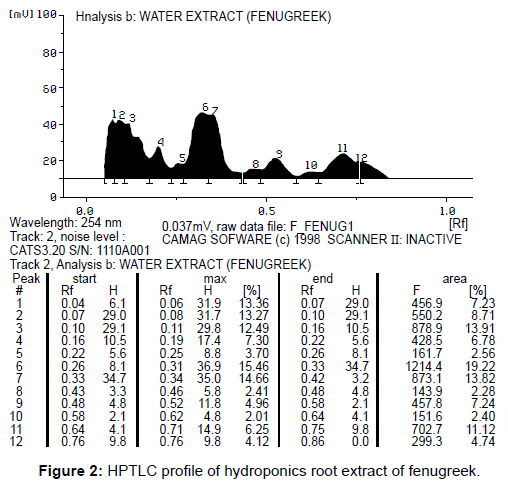 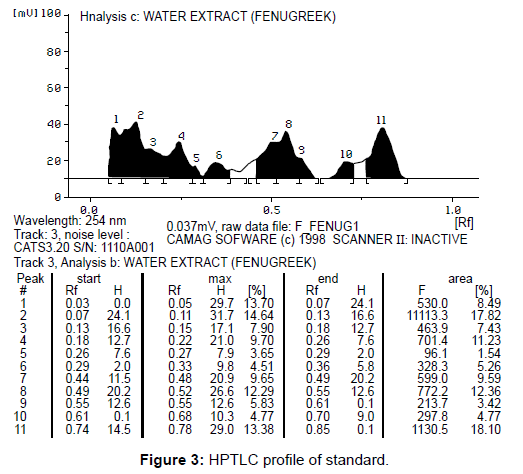 The organic compounds were separated from EAC extracts of hydroponics (Figure 4) sample of fenugreek using HPLC. The peaks 4 & 6, 6 & 8, 10 & 12 in hydroponics root exudates and standard (Figure 5) respectively, it showed the retention time of sample and standard are closely related and the peaks such as 4, 6 &10 in the hydroponics water medium were more or less matching with the standard peaks 6, 8 & 12. 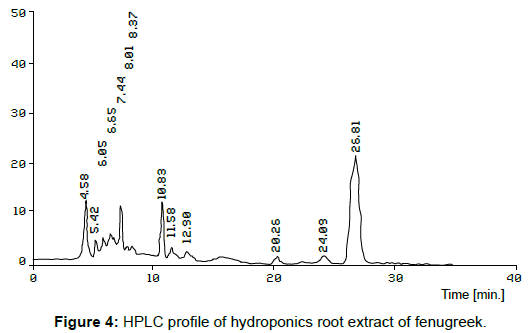 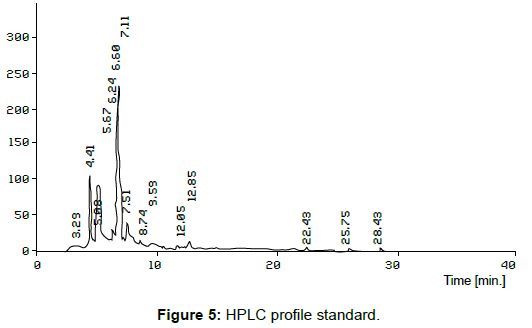 The hydroponics root extract was subjected to GC-MS analysis. The spectra of sample showed six major peaks at retention time 12.14, 13.65, 13.90, 18.97, 19.77 and 20.68 (Table 2). The peak at retention time 13.68 was compared with authentic sample OA, methyl ester and molecular weight was 298, from the result the structure of hydroponics root extract compound was may be OA-methyl ester (Figure 6 and Figure 7) which was compared with standard (not included) and confirmed.

Fenugreek is a native of the Indian sub-continent and the Eastern region. Its high adaptability to dry climate, high yield and their ability to fix atmospheric nitrogen make it an ideal for short-term crop rotation in Northern countries, such as Canada. In the traditional Indian pharmacopoeia, plants are often used by healers to treat recurrent fever. Further the polyphenolic structures of flavonoids partition into the hydroponics core of the membrane similar to cholesterol and cause a modulation in lipid fluidity [14]. These substances, therefore, could react with the deeper

membrane domains and intracellular structures, and protect the cells from oxidant injury. On the basis of GC-MS six peaks were detected in the EAC hydroponics root extract of T. foneum-graecum (Figure 6). Hence, identification of experiments were focused on the root extract, peak 2 was particular interest because of its retention time same with the standard OA. The EAC extract of fenugreek root secreted compound shown antibacterial activity against the human pathogen. We observed strong activity of T. foneumgraecum against B. subtiis and P. aeruginosa whereas poor activity was noted against E .coli and S. aureus. This result suggests corroborate the earlier findings of Omoloso and Vagi [15] who reported maximum activity of T. foneum-graecum against 26 bacterial pathogens. DPPH is a stable free radical having maximum absorption at 515 nm [16-18] that accepts an electron or hydrogen atom to become a stable diamagnetic molecule. We have observed the ability of the EAC hydroponics extract of fenugreek to neutralize the free radicals such as DPPH radicals. In the presence of the EAC hydroponics extract capable of donating an H atom its free radical nature is lost hence the reduction in DPPH radical was determined by the decrease in its absorbance at 515 nm. It is very convenient to follow the DPPH reactions and it has often been used to estimate the antiradical activity of the natural products. The decrease in DPPH absorption in the presence of two concentrations (20µl – 40µl) of EAC hydroponics extract has been monitored. It can be noticed that the extract at high concentrations showed significant decrease in the absorbance of DPPH radical. The present study was supported by the result of Gupta and Prakash [19], who has observed the least free radical scavenging activity of 7.52 - 23.89% was found in T. foneum-graecum at concentrations of 0.4 – 2.0 mg/ml. The free radical scavenging activity was found to increase with increasing concentration of the EAC hydroponics root extract. Thus, our findings show that OA, methyl ester from EAC root hydroponics extract of T. foneum-graecum has anti-bacterial activity against selected human pathogens and in vitro antioxidant property. It can be concluded that OA from T. foneumgraecum, could be used for developing plant-drived anti-bacterial and anti-oxidant drugs.