A Comparative Study of Nutritional Status in Government vs. Private School Children

Copyright: © 2016 Mbamalu ON, et al. This is an open-access article distributed under the terms of the Creative Commons Attribution License, which permits unrestricted use, distribution, and reproduction in any medium, provided the original author and source are credited.

One of the greatest problems for India is malnutrition among children. The country is still struggling with this problem. Malnutrition, the condition resulting from faulty nutrition, weakens the immune system and causes significant growth and cognitive delay. Growth assessment is the measurement that best defines the health and nutritional status of children, while also providing an indirect measurement of well-being for the entire population [1]. Malnutrition refers to the situation where there is an unbalanced diet in which some nutrients are in excess, lacking or in wrong proportion. Simply put, we can categorize it to be under-nutrition and over-nutrition. Despite India's 50% increase in GDP since 1991, more than one third of the world's malnourished children live in India [2].

Among these, half of them under 3 are underweight and a third of wealthiest children are over-nutriented. Nearly 70 years of Independence to India has brought about an improvement in the economic status of the country. This has also brought about a change in the outlook of the society. An increase in awareness of importance of education and the Government’s efforts to provide free education and the introduction of Mid-Day meal scheme has increased the enrolment of children from lower economic group in schools. Mid- Day Meal Programme (MDMP) also known as “School Lunch Programme” has a major objective to attract more children for admission to Schools and retain them so that literacy improvement of children could be brought about.

Chronic under nutrition in childhood is linked to slower cognitive development [3] and leads to serious health problems later on in life.

Understanding the nutritional status of children has far-reaching implications for the better development of future generations. A perspective of nutritional status of the school going children will reflect their prevailing health status. Until recently, underweight people were more than double that of overweight/obese category. Now the scenario has changed to one in which more people are obese than underweight [4] Overweight/obesity is on a serious rise nowadays and it could rise to such a degree that one in five of adults could be obese in 2025 [4].

The present study is conducted with the aim of knowing

• The nutritional status of school children in general and to make a comparison of the same in government versus private schools.

• Also to have an idea of how beneficial the Mid-Day Meal Scheme provided by the Government is to the children of LSES. The Indian government started midday meal scheme on 15 August 1995. It serves millions of children with fresh cooked meals in almost all the Government run schools or schools aided by the government fund [5].

Anthropometric examination is an almost mandatory tool in any research to assess health and nutritional condition in childhood. Physical measurements like body weight, height, circumference of arm and calf, triceps skin fold of children have been extensively used to define health and nutritional status of communities [6]. This is a cross sectional study on children of Government and Private Schools in Visakhapatnam. The study is conducted on a total population of 350 children. It includes both boys and girls of ages 10 to 16 years. Of the total 350 children, 175 are from Zilla Parishad High School, Yellapuvanipalem, Visakhapatnam and 175 are from Olivet High School, Maharanipeta Visakhapatnam. Height and weight of all children was measured by a stadiometer and simple weighing machine respectively. BMI was calculated by the formula BMI=wt in kgs/(ht in mts)2. BMI is relatively quick and easy to calculate. It is used for population surveys and health status when assessing individual patients. BMI provides a good indicator for the levels of body fat and it is known that having a BMI that is too low or too high is associated with an increased risk of ill health in childhood as well as later in life. In this study total boys are 199 (56.8%) and total girls are 151 (43.14%). The nutritional status is assessed by taking the BMI into consideration. Consent had been taken from the Heads of the respective schools as this is a noninvasive method.

As per Academy of Nutrition and Dietetics an averagely active adolescent child requires around 1800 to 2200 calories per day [1]. The Calorie intake of each child in Government School per day at home is around 1400 Calories to which another 700 Calories is supplemented by the Mid-Day Meal Scheme which comes to around 2100 Calories. This is just enough or slightly less than the daily energy requirement. In contrast the Calorie intake in a child of Private School is approximately around 2400-2600 Calories which balance the Physical Activity of around 200 to 400 Calories requirement well enough (Tables 1 and 2).

The above intake of home diet is calculated by a survey of both LSES and upper middle class families of their monthly groceries purchased and converting them into calories per month and substituting it per day for each member of a family of four. Also, their milk, breakfast and other extra food intake were taken into account based on individual questionnaires. In neither group there was no extra supplementation of vitamins or minerals.

BMI was done on three hundred and fifty students in the age group of 10 to 16 years. One hundred and seventy five students were from Government school and the same numbers are from Private school. In the Government school 56% (Normal=98) were found to be in the normal BMI. There was no incidence of overweight/obesity. However the underweight category in government school was 44%. Compared to it in the private school which caters to the slightly affluent society, the normal range of BMI has shown a higher incidence of 93.14% (163 students) and overweight of 6.85% and no incidence of underweight (Figure 1). The prevalence of overweight is more in boys compared to girls, i.e. 4.5%: 2.6%. The proportion of underweight is 22.6%: 21.8% in boys: girls (Figure 2). 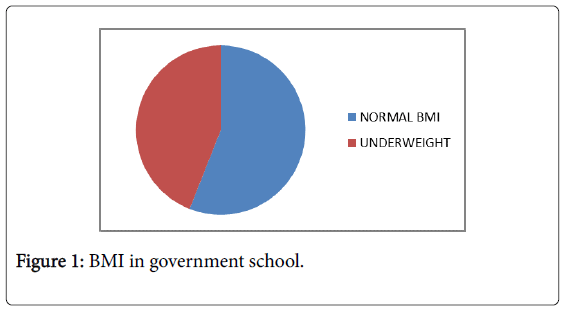 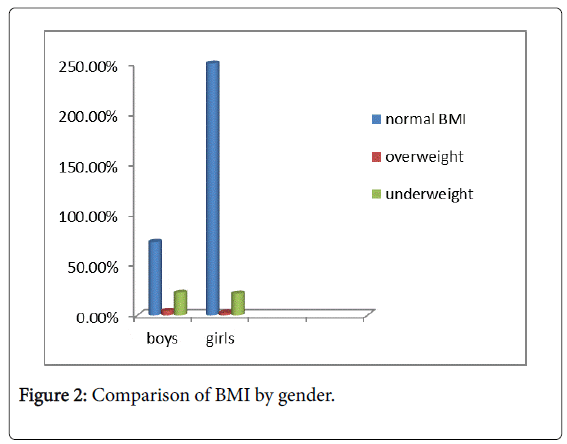 Figure 2: Comparison of BMI by gender. 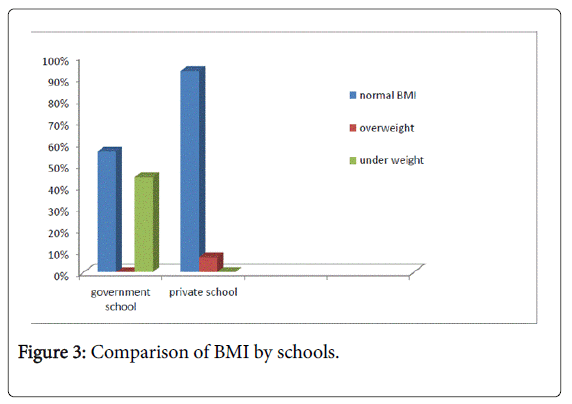 Figure 3: Comparison of BMI by schools. 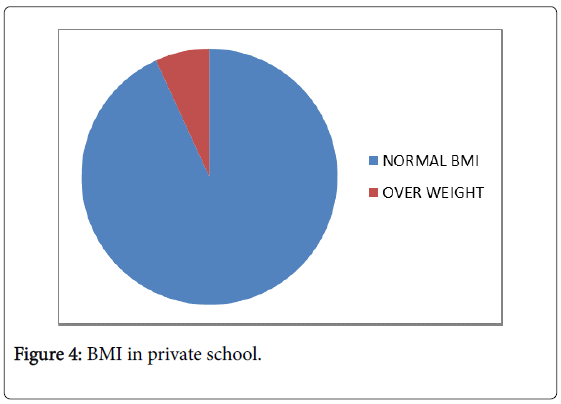 The normal p-value is 5.99 for 2 degree freedom. Chi square value is 0.914. 0.914<5.99. Therefore, null hypothesis is accepted. So, there is no association between gender and nutritional status.

Our figure also closely tallies with 4.78% of overweight in the study by Hq et al. in hazara division of Pakistan [13]. The prevalence of overweight is 14% whereas underweight is 52% and normal 32% in a study conducted by Warraich et al. in Karachi [14]. There is a significant disparity in the overweight figure of 46.38% in upper socioeconomic class when compared to lower socio economic strata in a study conducted by Marwah et al. [15] where the figures are 46.38% overall in both boys and girls.

In our study, there is a higher incidence of overweight of 6.85% in Private School. There is a marked prevalence of underweight of 44% in the Government schools. This suggests that the 700 kcal provided by the mid-day meal scheme which has to be supplemented by diet at home is not done in the lower socio economic strata probably because of poverty. Compared to it the absence of underweight in private school and prevalence of overweight though only to small extent of 6.85% reflects the over indulgence in food habits and relatively sedentary life in upper socio economic class.

As our study is a limited one, a broader perspective of study involving a larger cross sectional population may give a better evaluation of the nutritional status of school going children. Worm infestation and other associated causes of malnutrition have to be assessed. The other parameters of health status should also be taken into consideration. Improving Mid-Day meal scheme and encouraging easily available inexpensive energy giving foods like leafy vegetables and millets among children in India can improve the nutritional status of school children to an extent. A little prevalence of obesity in Private School children recommends an increased physical activity. Physical activity is a good health discipline which should be encouraged in both groups of school children while at the same time sensitizing them to healthy and enough food intakes.