Copyright: © 2016 Madhuri V, et al. This is an open-access article distributed under the terms of the Creative Commons Attribution License, which permits unrestricted use, distribution, and reproduction in any medium, provided the original author and source are credited.

Odontomas are benign tumors of odontogenic origin characterized by their slow growth and non-aggressive nature. Odontomas may consist of enamel, dentine, cementum and pulpal tissue but have a discrepancy in the structural arrangement of these epithelial and ectomesenchymal tissues. They are usually asymptomatic and diagnosed by routine radiographic examination. They are rarely associated with primary teeth. These malformations may cause interference with eruption of permanent teeth, cystic transformations and bone resorptions. Surgical excision is the treatment of choice with preservation of adjacent structures. This case report presents a compound odontoma associated with unerupted primary lateral incisor in a seven year old female child.

Odontomas are the most common type of odontogenic tumors and account for approximately 22% of maxillary odontogenic tumors [1-3]. They are considered to be developmental anomalies rather than true neoplasms [4]. They are generally asymptomatic [1]. The term odontoma was coined by Paul Broca in 1867. The World Health Organization (WHO) 2005 has categorized odontomas based on the histopathological findings as compound and complex odontomas. In compound odontomas, the dental tissues are normal, arranged in an orderly pattern, but their size and conformation are altered, giving rise to multiple small teeth like structures called odontoids or denticles where as in complex odontomas, the dental tissues are well formed but exhibit an amorphous and more or less disorderly arrangement [5,6]. Compound odontomas are more common than complex odontomas and coexistence of both compound and complex odontomas has also been reported [5,7].

The etiology of this tumor is still unclear, but it is known that factors such as trauma, local infection, genetic mutation or even hereditary factors can lead to the formation of this lesion [2]. Odontomas are discovered during second and third decade of life and occur predominantly in the permanent dentition compared to primary teeth [8,9]. The presence of these lesions is detected by routine clinical and radiographic examination [2]. Odontomas may be associated with the absence of some primary or permanent teeth [2]. Histopathology analysis of the specimen is helpful to establish the definitive diagnosis [2]. Early diagnosis of odontomas during primary dentition is essential in order to prevent complications such as impaction or failure of eruption of permanent teeth [10]. This case report presents the clinical and radiographic findings of a child with compound odontoma associated with unerupted primary maxillary lateral incisor.

A seven year old female child came to the department of paediatric dentistry with a chief complaint of unerupted upper front tooth. Past medical and family history is non contributory; there was no history of trauma to the teeth or jaws. Extra oral examination showed a healthy girl with no other physical abnormalities. The presence of 19 caries free primary teeth in good periodontal condition was registered in the intra oral examination but the maxillary primary right lateral incisor was clinically missing. The soft tissue covering the edentulous space in relation to the missing lateral incisor was found to be normal (Figure 1a and 1b). An orthopantamograph revealed numerous calcified structures resembling teeth coronal to the area of the missing lateral incisor (Figure 2a). The permanent lateral incisor seemed to be embedded within the mass. The permanent central incisor was present adjacent to this mass and it was rotated. Based on the radiographic features, a provisional diagnosis of complex or compound odontome was made. 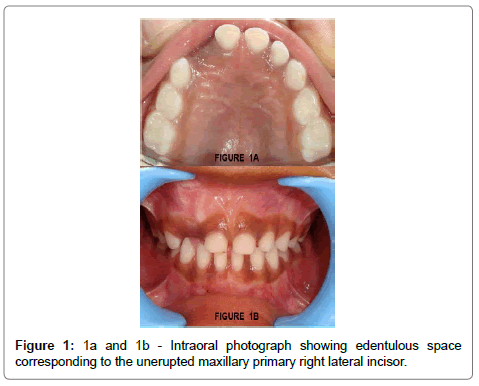 Since the child exhibited frankle’s definitely negative behaviour the surgical procedure was done under general anesthesia. Buccal mucoperiosteal flap was elevated and the bone overlying the lesion was removed. The calcified structures were then removed without disturbing the permanent lateral incisor (Figures 2b and 3). The wound healing was uneventful and sutures were removed after 7 days. Histopathological examination confirmed the diagnosis of compound odontoma. The patient was recalled periodically to monitor the eruption movement of the permanent lateral incisor. Signs of eruption were evident during the following visits and finally after 24 months the permanent lateral incisor erupted into the oral cavity (Figure 4a and 4b). Odontomas are the most common types of odontogenic tumors which result from the growth of completely differentiated epithelial and mesenchymal cells that give rise to ameloblasts and odontoblasts [4]. When fully developed, odontomas consist chiefly of enamel and dentin with variable amounts of pulp and cementum [4]. They are commonly seen in second and third decade of life; however the child in the present case report was in the first decade of her life [8]. The sex predilection is contentious as few authors report equal distribution among genders while others report either male or female predominance [8]. The anterior maxilla has a stronger tendency for being the predilection site for compound odontoma as seen in this case [10].

Gravey et al. classified compound odontomes as: Denticulo type: composed of two or more separate denticles, having crown and root, dental hard tissues resembling to that of tooth, particulate type: composed of two or more separate masses or particles, bearing no resemblance to tooth consists of hard dental tissues; Denticulo – particulate type: in this type denticles and particles are present together [8]. Accordingly, the present case falls in the denticulo particulate type of compound odontome.

Odontoma may cause disturbances in the eruption of teeth such as impaction, delayed eruption or retention of primary teeth [8]. The canines, followed by upper central incisors and third molars are the most frequent permanent teeth impacted by odontomas. Occurrence of odontomas associated with primary teeth are rare and in a very few instances they are related to missing teeth [1,3]. However, in this child the odontoma was associated with a primary lateral incisor. Odontomas are of concern when they are associated with pain and swelling, suppuration, bony expansion, displacement of teeth, root resorption, paresthesia and cystic transformations [7,9]. In the present case report the odontoma was associated with an unerupted primary lateral incisor which had also displaced the permanent lateral and central incisors.

Radiological findings may vary depending upon the amount of enamel and dentin present in the lesion; this makes clinical judgement difficult as the lesion which is radiolucent in early stages may become radiodense at later stages [7]. Based on the clinical and radiographic findings, a provisional diagnosis of odontoma was established. Sometimes odontomas are found associated with syndromes such as Gardner syndrome, Hermann syndrome and basal cell nevus syndrome however they were no such associated conditions in this child [7].

Ideally odontomas should be removed when the permanent teeth adjacent to the lesion exhibit about one half of their root development because this ensures safety of the developing permanent teeth and prevents interference with their eruption. Kaban states that odontomas are easily enucleated and adjacent teeth that may have been displaced by the lesion are seldom harmed by the excision since they are usually separated from the lesion by a septum of bone [1]. The treatment of choice for odontoma could be surgical removal of the lesion with preservation of the underlying succedaneous tooth bud. Similarly in the present case, the odontoma was surgically excised and clinical and radiological follow-up was done till the eruption of the permanent lateral incisor. After the removal of the tumor the underlying permanent teeth must be treated according to their location, their developmental stage and the age of the child [5]. In the present case the permanent lateral incisor was immature and located above the odontoma deep within the alveolar bone; hence it was kept under observation for spontaneous eruption. The permanent lateral incisor has erupted spontaneously without any intervention.

Spontaneous eruption of impacted teeth in such cases has been reported to range from 32% to 48.5% [5]. Routine post-operative clinical and radiographic analysis is essential to monitor the eruption of the teeth thereby aiding in the prevention of malocclusion. A thorough clinical and radiographic examination should be performed for all the pediatric patients who present with clinical evidence of delayed eruption, missing tooth, or tooth displacement, anticipating the presence of odontomas, impacted supernumerary teeth and congenitally missing teeth.

Early diagnosis of odontomes aids in conservative treatment and better prognosis. Complications in dental arch development, occlusion and esthetics can be avoided through timely intervention. Surgical excision is the treatment of choice however care should be taken not to damage the adjacent tooth or tooth germs especially in children.