1Department of Biomanagement, School of Life Sciences and Technology, Indonesia

Copyright: © 2016 Muhammad H, et al. This is an open-access article distributed under the terms of the Creative Commons Attribution License, which permits unrestricted use, distribution, and reproduction in any medium, provided the original author and source are credited.

Indonesia shrimp production in 2014 was 623.000 metric tons, which was dominated by white shrimp species (Litopenaeus vannamei), with the contribution of up to 69.5% of shrimp total production [3]. The production actually does not ensure the sustainability of the particular industry, because most shrimp farms use conventional culture technology (typically a batch/static or a flow-through system). The existing shrimp rearing strategy that widely applied is still economically profitable for the farmers due to its simplicity and acceptable production cost. However, since the cultivation relies on an outdoor earthen pond with less attention paid to water quality and disease/predation control, it is not surprising that the shrimp production is often unpredictable under this culture condition [4].

The accumulation of harmful substances from uneaten feed and excretion (e.g. ammonium) can exceed the tolerance limits and affect the shrimp productivity in conventional culture system [5]. Besides, the system is considered as not environmentally friendly, because toxic effluent water can pollute the surrounding aquatic environment [4]. In term of space requirement, the system needs large production area and should be closed to coastal area to ensure sea water access. These circumstances will contribute to the inflexibility of shrimp culture and shrimp industry sustainability in the near future. One cultivation strategy, Zero Water Discharge (ZWD) system, was developed to resolve these problems [6,7]. ZWD is an intensive culture technology, which is environmentally friendly as it maintains water quality, therefore prevents pathogen spreading as well as wastewater discharge, that is rich in nutrients, to the environment [8]. The ZWD principle is to limit/reduce water usage, by implementing microbial consortium that recycles nitrogen compound in the culture water, and to clean harmful nitrogen substances before the water is partially or totally reused [6,7]. Based on Suantika et al. [7], by cultivating white shrimp using ZWD system at a laboratory scale, excellent shrimp culture performance reflected by acceptable water quality, 90% survival rate, and low feed conversion ratio (FCR) were obtained. For further development of the system to an industrial scale, research on biological, technical, and financial feasibility needs to be conducted before implementing this low salinity ZWD system in a real aquaculture operation. Therefore, the aim of this current study was to analyze the biological, technical, and financial feasibility of the low salinity white shrimp production using zero water discharge (ZWD) system in an urban, north-coastal area of Gresik, East Java Province, Indonesia.

Upon collection, eight days old white shrimps post larvae (PL-8) were stocked in an indoor circular concrete pond (≈20 m3 volume) at the stocking density of 60 PL/L and 33 ppt initial salinity. To acclimatize shrimp PL at low salinity, salinity reduction was conducted at the rate of 3 ppt/day by mean of daily freshwater addition during nine days acclimatization period, until the salinity level decreased to 5 ppt [11]. After acclimatization, the PL-17 was ready for grow out cultivation at low salinity. The schematic overview of shrimp acclimatization process is presented in Figure 1. 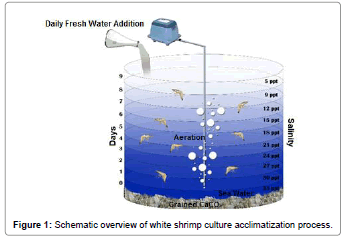 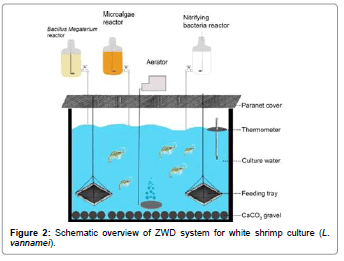 PL-17 white shrimp cultivation using ZWD system at low salinity water (5 ppt) was conducted for 70 days in three different stocking densities treatments: (1) stocking density 1: 200 in d/m3, (2) stocking density 2: 300 in d/m3, and (3) stocking density 3: 400 in d/m3. Each treatment was conducted in four replicates. Continuous aeration rate of 47.62-83.33 mL/second was maintained during culture period by mean of six aeration lines (through air diffuser tubing) inside each culture tank. Approximately 2% of total water volume from each tank was siphoned and replaced every day to remove the remaining uneaten feed and shrimp feces. The feeding scheme was modified from Tacon [13]: commercial feed with 40% protein content was delivered five times a day at 06:00, 10:00, 14:00, 18:00 and 23:00. Feed was placed on a feeding tray and monitored frequently to provide information of daily delivered feed accuracy (Table 1). Leftover feed on the tray enables monitoring of shrimp consumption rate, to observe the effect on shrimp size and health condition. Feeding level was adjusted every week based on the measurement of mean body weights and estimation of the shrimp survival and feeding rate. Each parameter contributed and calculated with equation 1:

Technical feasibility was assessed based on the production site analysis and operational necessities for shrimp production. The distance of production site to water resource, biophysical condition, land topography and structure, materials supply, market location, accessibility and supporting facilities nearby were considered in production site analysis [15]. On the other hand, materials, equipment and facilities required for cultivation were accounted for operational necessities analysis based on their specification and quantity [16].

Production scheme plan was developed to produce 1,000 kg shrimp biomass/cycle at each stocking density. The scheme was arranged by identification of operational unit needed for shrimp production at industrial scale. Afterwards, a farm layout using low salinity ZWD system was designed based on the culture performance at each stocking density. The production scheme was then developed based on the real condition in shrimp industry during the study period.

By stocking shrimp at a higher density, higher percentage of shrimps which sized between 100-150 shrimps/kg was also harvested. Proportion of harvested shrimp with size distribution between 100- 150 shrimps/kg at 400, 300, 200 in d/m3 stocking densities was 95.85%, 91.93%, 86.77%, respectively. In contrast, higher percentage of shrimps with lower size distribution (150-250 shrimps/kg) was obtained at a lower stocking density (Table 3).

It is shown that the higher stocking density (300 in d/m3 and 400 in d/m3) produced significantly lower survival rate compared to the low stocking density (200 in d/m3) (Table 4). This is attributable to the environmental stress due to space competition and crowded effect caused by the high shrimp population present [18,19]. It has been suggested that competition increases cannibalistic behavior of shrimps, particularly during the molting period [20,21]. Besides, high stocking density causes higher risk of water quality deterioration, pathogen spreading, and cannibalism due to competition for food and space [19]. Although high stocking densities resulted in decreased survival rates, a more homogenous niche occupancy could have been obtained and hence the more homogenous feed access chance may have allowed the survived shrimp to reach a higher final body weight at the end of the culture period [22]. No significant differences in FCR value were observed between the high and low stocking densities, indicating that the feed conversion efficiency was still acceptable at high stocking densities, despite their lower survival rates.

In general all biological parameters were in the acceptable condition for shrimp production. All treatments resulted in survival rate of 70-93% and productivities of 1.39-2.21 kg/m3 within 70 days culture period, which were comparable to an intensive conventional culture method in Indonesia (average survival rate of 81% and productivity of 1.72-2.0 kg/m3 within 100-120 days culture period at a stocking density of 60-300 in d/m3) [23-25]. Based on the following comparison between ZWD system and conventional system performances (Table 3), the use of ZWD system in all stocking densities was biologically feasible.

Water quality parameter analysis: Several culture physicochemical parameters measured during 70-day-culture period are presented in Table 4. In general, there were no significant difference on water quality measured among treatments (p>0.05). Acceptable water quality parameters were obtained among treatments during 70 days culture period. Temperature, dissolved oxygen, pH level, ammonium (NH4 +-N), nitrite (NO2 --N), and nitrate (NO3 --N) were ranged between 29.3-30.9°C, 4.90-8.50 mg/L, 7.27-8.38, 0–3.0 mg/L, 0.2–5.0, and 5.0- 35.0 mg/L, respectively. The ammonium (≤3.95 mg/L), nitrite (≤25.7 mg/L), nitrate (≤232 mg/L) concentration was still within tolerance range of hite shrimp culture [5,26,27]. The similar values of most water quality parameters, especially pH level and ammonium, nitrite and nitrate concentration between treatments were attributable to the use of ZWD system for all stocking densities, which emphasizes on the nutrient (carbon and nitrogen) cycle manipulation [7]. In this system, ammonium produced from organic decomposition by heterotrophic bacteria, such as added B. megaterium inoculum, can be directly converted to nitrite by ammonium oxidizing bacteria from nitrifying bacteria consortium. On the other hand, nitrite availability enables nitrite oxidizing bacteria to shift chemical equilibrium of the nitrification reaction by nitrate production. The produced nitrate can be used by photoautotrophic microalgae C. calcitrans [7]. The use of grained CaCO3 was able to stabilize the pH level due to its slow release of carbonate ion (CO3 2-) that can balance the acidification as the result of organic matter decomposition and continuous nitrification processes [28-31].

Selection of suitable area for ZWD system implementation as well as production requirements are crucial to ensure that the technology can be accepted and successfully implemented. Farmer selection was considered to be the most important aspect. By considering several criteria as follows: quality and quantity of water sources, land topography, land structures, accessibility, availability of production infrastructure, such as electricity sources, seed producers, and distance to an aquaculture government research facility, it is suggested that the north coastal areas of East Java Province, such as Tuban, Lamongan, Gresik, Sidoarjo, Pasuruan, Probolinggo, and Situbondo were suitable for shrimp urban aquaculture using ZWD system. All of these areas fulfill the following criteria:

3. Land topography is relatively contour less, provides easiness to build a farm on the terrain and less land clearing cost.

5. Free from any social conflict.

6. Receive government supports in form of many aquaculture research institutions.

1. Purchasing and inventory unit, for ordering and purchasing raw materials

4. Harvesting unit, to conduct shrimp harvest from a pond and post-harvest treatment

To operate the mentioned scheme, one or two technicians and one tank operator are needed to produce 1000 kg/cycle of fresh shrimps. Considering the small production scale, the recruited human resources must be able to multitask in order to maintain production efficiency and sustainability. ZWD system facilities include a controllable small pond that provides easiness to be cleaned and harvested regularly, which simplify the labour works. Workload are distributed into several positions consist of a technician, a pond operator and an owner. Technician is responsible for assisting operator and technical matters related with water treatment and rearing process, including siphoning, feeding, shrimp weight sampling and harvesting. Pond operator is responsible to lead production operational and coordinate technician to assist production. Meanwhile, the owner is responsible to pay the worker’s salary, to create financial report, and to direct and build company networks.

1. One production cycle runs for 70 days. 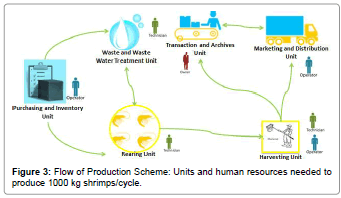 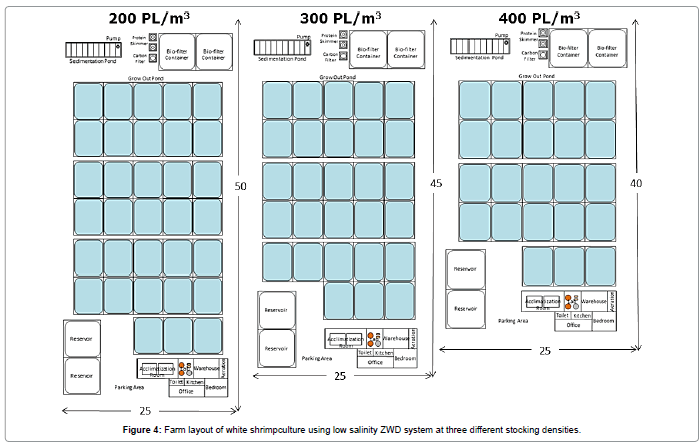 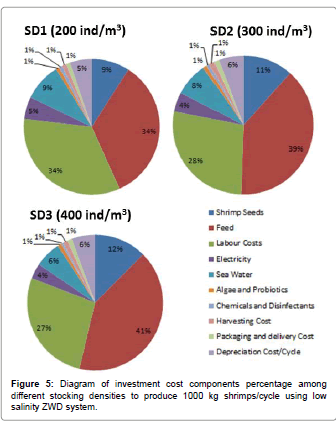 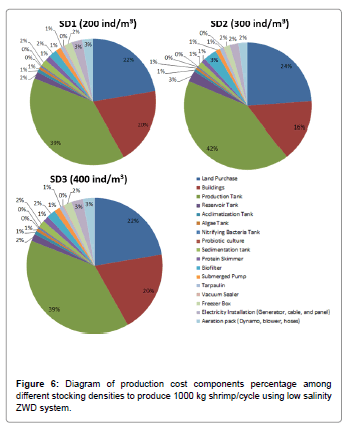 Financial ratio calculation: Financial ratios were calculated to assess the financial feasibility of ZWD system. Financial ratio analyses consist of NPV, IRR, B/C Ratio, and Pay Back Period (PBP). Based on financial analysis, the project is financially feasible if the NPV positive, the IRR value is higher than discount factor, and the B/C ratio value is higher than 1 [16,38]. The financial ratio calculations are presented in Table 18. It can be clearly seen that 300 and 400 in d/m3 stocking densities were financially feasible as they resulted in positive NPV (approximately Rp 47,593,537 and Rp 69,439,955), IRR value that higher than discount factor (approximately 13.40% and 15.49%), and B/C ratio higher than 1 (around 1.13 and 1.22). In contrast, 200 in d/ m3 stocking densitiy was not financially feasible due to its negative NPV value (around Rp -175,315,390) and IRR value that is lower than discount factor (lower than 10%), with B/C ratio less than 1 [38].

Based on the results of this current study, it can be concluded that the implementation of low salinity ZWD system for urban shrimp aquaculture production at high stocking density of 300 in d/m3 and 400 in d/m3 was feasible to be applied in Gresik on the north-coastal area of East Java Province, Indonesia.

We thank LPPM ITB for the Community Empowerment Research Grant 2014 as the main funding for this study. We also thank Ir. Usman Zuhri as the Head of UD. Popular Nursery, for the kind support in providing shrimp larvae and facilities used in this study.