Copyright: © 2016 Shimizu Y, et al. This is an open-access article distributed under the terms of the Creative Commons Attribution License, which permits unrestricted use, distribution, and reproduction in any medium, provided the original author and source are credited.

IgA nephropathy (IgAN) is the most common form of primary glomerulonephritis worldwide [1] and is one of the leading cause of end-stage kidney disease (ESKD) [2]. IgAN is characterized by the presence of polymeric IgA1 deposits in glomerular mesangial areas [3-5]. Since it is necessary to perform a renal biopsy to diagnose IgAN, many efforts have been devoted to developing verified methods to predict IgAN without the biopsy [5-8].

Since it was revealed in 2000 that the patients with a serum IgA/C3 ratio >3.01 have a higher possibility of IgAN [5], the IgA/C3 ratio has been discussed as a useful clinical biomarker to predict the diagnosis, renal histological findings, and prognosis of IgAN [5-7,9-13]. However, there is no report focused on the chronological change of the IgA/C3 ratio.

The Japanese Society of Nephrology (JSN) published clinical guidelines for IgAN in 2011 (3rd version) [14]. The guidelines are based on the data from a multicentre retrospective cohort study [15]. These guidelines indicate new risk stratification for ESKD progression based on clinical histological severity. In these guidelines, IgAN patients are divided into four groups (low, medium, high, ultra-high) according to the possible risk of ESKD in 5 years.

At the time of renal biopsy and the nearest consultation day from April 30th, 2014, all patients provided blood and freshly voided samples. Serum and urine samples were determined in the clinical laboratory center of the Juntendo University Hospital. The level of urinary protein excretion was individually normalized to urinary creatinine (Cr) levels. The estimated glomerular filtration (eGFR) was calculated using the Japanese eGFR equation [19].

All renal biopsy specimens were evaluated by immunofluorescence, light, and electron microscopy. For light microscopy, paraffin sections were stained with hematoxylin-eosin (HE), periodic acid-Schiff (PAS), and periodic acid methenamine silver-Masson trichrome (PAM-MT). Histological severity was graded according to the JSN histological grading criteria for IgAN patients [14]. The patients who had a percentage of the affected glomeruli of <24.9 % of the total number of glomeruli were classified as histological grade (H-grade) I, 25 to 49.9 % as H-grade II, 50 to 74.9 % as H-grade III, and >75 % as H-grade IV.

Table 1: Risk stratification for progression to ESKD based on the clinical and histological severity in the JSN clinical guidelines for IgAN patients.

Table 2: Characteristics of the IgAN patients. Comparing patients with or without tonsillectomy, the tonsillectomized patients showed a smaller ⊿Cr/year and a significant difference of ⊿Cr/year among patients in histological grade 2, clinical grade 3, and high risk for ESKD (p<0.05, p<0.05, and p<0.01, respectively) (Figures 4d-4f).

Effects of combination therapy with tonsillectomy and steroid therapy 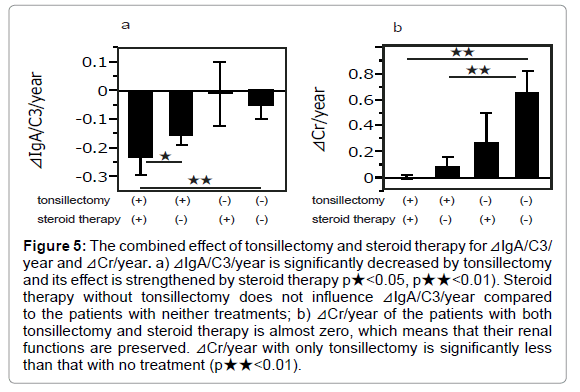 ⊿IgA/C3/year is not significantly different between patients in each histological and clinical grade (Figures 3a and 3b). There is a significant difference in ⊿IgA/C3/year between the middle and high risk groups for the progression to ESKD (Figure 3c). While the histological and clinical grade groups are from cross sectional data at the time of renal biopsy, ESKD risk is estimated based on a cohort study in Japan [15] and this stratification is including a chronological concept as well as ⊿IgA/C3/year. It is suggested that both ⊿IgA/C3/year and ESKD risk are influenced by the treatments.

Since macroscopic hematuria is observed after upper respiratory infection and is driven by stimulating tonsils in IgAN patients, a relationship between tonsillar infection and IgAN has been argued [29]. The tonsil is a mucous lymphatic organ and polymeric IgA1 (secretory IgA1) is secreted on the mucous membrane. A part of this polymeric IgA1 is considered as a nephritogenic IgA1. The plasma cells, which produce nephritogenic pIgA1 may transfer into bone marrow [30]. These plasma cells produce circulating nephritogenic pIgA1 and glomerular depositive CICs are formed. A combined tonsillectomy and steroid pulse therapy has been developed and performed in Japan [16-19]. The objective of this therapy is to decrease plasma cells producing nephritogenic pIgA1 in the tonsils and to prevent the cells from transferring to bone marrow [31].

Tonsillectomy and ESKD risk grade 3 have been indicated as significant enhancers for ⊿IgA/C3/year by a multiple regression analysis (Table 3a). It is suggested that the patients in the higher ESKD risk grade have a higher level of ⊿IgA/C3/year and are more down regulated by tonsillectomy than those in lower risk grades. Tonsillectomy, steroid therapy, and clinical grades 1 and 3 are significant enhancers for ⊿Cr/year (Table 3b). A similar analytic result is obtained when ⊿IgA/C3/year is used instead of tonsillectomy (Table 3c). This phenomenon indicates that the huge impact on ⊿IgA/ C3/year is driven by tonsillectomy. It is interesting that steroid pulse therapy is extracted as significant enhancer for ⊿Cr/year and it may reflect various pharmacological characteristics of steroids, including anti-inflammatory effects as well as the inhibition of producing nephritogenic pIgA1.

The authors are grateful to Mr. Kaoru Sasao for his clerical assistance. This study was supported by a grant in a part by The Clinical Research Project for Intensive Therapy of Chronic Kidney Disease: a collaborative project between Kowa Co. Ltd., Kyowa Hakko Kirin Co. Ltd., Mitsubishi Tanabe Pharma Corporation, and Novartis Pharma, and by JSPS KAKENHI grant number 26461238. Shizuoka Medical Research Center for Disaster, Juntendo University is supported by the MEXT-Supported Program for the Strategic Research Foundation at Private Universities, 2015-2019.