Copyright: © 2017 Thirumamagal R, et al. This is an open-access article distributed under the terms of the Creative Commons Attribution License, which permits unrestricted use, distribution, and reproduction in any medium, provided the original author and source are credited.

Stable oxides of Ni, Fe and Co nanoparticles are synthesized by chemical route using leaf extraction. Structural, biological morphological and magnetic properties were investigated. X ray pattern shows a polycrystalline structure of samples. Diffraction planes of (200), (122) and (200)-oriented crystal structures were revealed by X-ray pattern for NiO, Fe2O3 and CoO respectively. Hexagonal, orthorhombic and cubic crystal structures have been revealed respectively for NiO Fe2O3 and CoO nanoparticles. Microscopic structure has been detected by using of Scanning Electron Microscopy. Ni, Fe and Co is present at 71%, 78.8%, 79% as indicated by EDS analysis respectively. Mass magnetization values of 51, 61 and 54 emu/g are recorded for NiO, Fe2O3 and CoO nanoparticles.

The aim of this study was to find out comparative studies of metal oxides of Ni, Fe and Co mediated oxidative stress synthesized NPs. This study suggested that bare CoO NPs are a toxic for primary human immune cells that deals directly with human health. Surface modification or surface functionalization may open the gateway for further use of CoO NPs in different industrial use or in biomedical sciences [1,2]. The highest values of coercive field and saturation magnetization were obtained for the sample at x¼1.0, while the lowest values were obtained in the sample with the highest Co excess (x¼2.5). The results indicated that the used synthesis route was suitable for the synthesis of cobalt ferrite with moderate saturation magnetization and high coercive field values [3-5]. In addition, the de-amination is contributed by the nucleorphilic attack of water molecule to the carbon atom of aromatic ring bonded to NH2 group. After the deamination reaction, the intermediate product is phenol. The following de-hydroxyl reaction by FeO domain proceeds immediately. The final product is benzene that is observed in all FIT involved catalytic routes [4]. Nanostructured iron oxides have been widely used in catalysis, adsorption, sensor, biomedicine, and so on. In this study, iron oxide nanoparticles containing nanosized cavities were prepared by hydrothermal treatment of a colloidal dispersion of iron hydroxide. Moreover, the iron oxide nanoparticles calcined 7-15 nm and 5-12 nm-diameter cavities, respectively. These peculiar structures might be conducive for some applications such as adsorption involving large molecules [5]. Pure NiO, CoO and Fe2O3 exhibits anti ferromagnetic nature, which transforms into ferromagnetic one with moderate moment at room temperature with decreasing crystallite size. On the other hand, annealing of as-milled powders showed a large reduction in magnetic moment and the rate of decrease of moment strongly depends on the milling conditions. The observed properties are discussed on the basis of crystallite size variation, defect density, oxidation/reduction of Ni, Co and Fe and interaction between un- compensated surfaces and particle core with lattice expansion [6,7].

Materials used for the synthesis of Nickel oxide nanoparticles are Nickel Chloride salt (NiCl2), cobalt chloride CoCl2 and ferrous chloride FeCl2 the salt was purchased from Merck, were the main sources of producing synthesized NiO, FeO and CoO, these three salt solutions were placed separately in three different beakers. These salt solutions were prepared in 1M ratio, with these individual beakers, 1mM NaOH was added separately 1 μL of coreopsis leaf broth extract with, 30 μL of milli Q water and then boiling the mixture before finally decanting it, freshly prepared double distilled water was used throughout the experimental work, the mixture was heated to 250°C for 20 minutes followed by filtering. Maintain this temperature for the entire reaction. Broth stored in refrigerator at 4°C. Within an hour (50 minutes) cherry red solution was obtained. Different plant extracts require different times to complete the reaction. The extract was added to 3.5 × 10-4 M Nickel chloride aqueous solution, obtaining different samples with different pH (the volumetric ratio mixture extract/Nickel chloride salt control sample containing only Nickel chloride salt. We have synthesized the Nickel oxide, cobalt oxide and ferrous oxide nanoparticles using this plant. The leaves were collected and the leaf broth was prepared by taking 5 g of thoroughly washed and finely cut leaves and 15 μL of milli Q water. Then the leaves were nicely crushed in mortar pestle, transferred the nicely crushed leaves in to centrifuge tube and centrifuged at 10000-11000 rpm for 10 min at 4 to 5°C. 1 μL of nitric acid was mixed with the 1 μL of biological extract and added into 30 μL of boiling milli Q water. Within a few minutes; the solution developed a distinct characteristic colour (Green) and later varied the volume of concentration (50 μL and 100 μL), like that the experiment is repeated for different pH (7, 9) by keeping the volume leaf extract (25 μL) constant with constant stirring till the reaction got over (20 min) and studied the absorption of samples by using spectrophotometer.

The XRD pattern of NiO, CoO and Fe2O3 were shown in Figure 1. All the observed diffraction peaks are indexed within face centred cubic (FCC) structure of NiO phase, in agreement with JCPDS card No. 451027 (Hexagonal) and FCC structure of CoO phase in agreement with JCPDS card-711178 (Cubic) and third nanoparticle Fe2O3 phase in agreement with JCPDS-897047 Orthorhombic. It can be noticed that the peak are broad, indicating the formation of nanocrystalline NiO, CoO and Fe2O3 phase. In addition, with annealing temperature of 250°C, the intensity of peaks increases thereby enhanced crystallinity (Table 1). The crystallite size (D), dislocation density (δ), strain (ε), and lattice parameter (a), were calculated using the following formula: Where λ is the wavelength of the x-ray source, β is the full-width at half-maximum (FWHM in radian and θ is the Bragg’s angle;

The dislocation parameter is then calculated;

The strain is then determined by the following relation,

Where dexp and dhkl represent the experimental and for standard values of interplanar distance respectively calculated values are reported in Table 2. It can be noticed that the value of the crystallite size increases slightly setting in the range 29.82, 26.103 and 31.289 nm, due to grain growth. According to formula (2), the smaller value of the crystallite size, the larger the value of the dislocation density (inversely proportional), which indicates a better crystalline quality. From Table 1, it can be seen that the prepared films exhibit a compressive strain (all values are positive). In addition, when annealing temperature increases, the strain value increases, which is may be associated with the formation of oxygen vacancies [8].

Table 2: Structural and optical analysis of NiO, CoO and Fe2O3 Nanoparticle at 250°C.

Morphological studies of microstructure analysis deals with agglomeration of the particles due to biosynthesis of the leaf extract. Coreopsis leaf extract was added in the equal ratio of these three mother solutions of the particles. The as-prepared NPs were annealed at constant temperature of 250°C. The particles distributions of these NPs were almost constant shown in Figures 2a, 2b, 3a, 3b, 4a and 4b respectively. Scanning Electron Microscopy for creating nanofibers of these oxides materials and its elemental analysis confirmed the metal oxides and its presence in its condition (Figures 2-4). 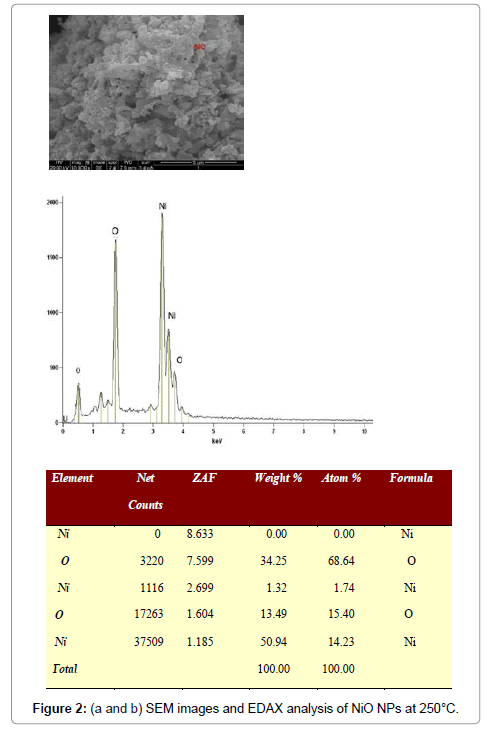 Transmission Electron Microscopy confirmed the size distribution of metal oxides NPs which were below 100 nm, shown in Figure 5a- 5c. The diffraction planes of x-ray diffractometer were well matched with SAED pattern. This efficient tool exhibits the real morphology of single particles and its agglomerations of the outcomes of the product. Slight dark batches present in these three particles distributions verify the biosynthesized products. The experimental results for NiO, CoO and Fe2O3 are more complete and will, therefore, be treated first. Thus, we note first that the magnetization curves for these samples for the present particle size range (i.e. below about 50 nm) and manifest a peak at about 29 K (which should approximate the Néel temperature, known to be a degree or two smaller than the peak temperature and converge at about 100 K (Table 4). The inverse susceptibility shown in Table 4 manifest an anti-ferromagnetic behavior, namely, χ(Τ)=χο+C/(T-θ) with a Weiss temperature θ<0. Here C is the Curie constant and χο comprises an admixture of several contributions, including various magnetic phases contributions a temperature independent orbital contribution and a small diamagnetic contribution measured in this system elsewhere to be approximately 2.06 × 10−6 emu/Oe.g for NiO (i.e. relatively small), 2.53 × 10−6 emu/Oe.g, for CoO and 2.96 × 10−6 emu/Oe.g for Fe2O3. Choosing to find the values of Curie constant for the sample Fe2O3 neglecting χo yields a Curie constant CB≈6.54 10−3 K emu/(g Oe), and hence an effective moment per ion μeff≈3.69 μB, with θΒ≈−55 K. The determination of θ is, however, known to be problematical and a large range of values is reported in the literature (Figure 7). On the assumption that the overall magnetic behavior m(Ho) (Figure 7) of this nano-particulate system can be expressed as a linear combination of an average antiferromagnetic behavior for the core component and an average superparamagnetic behavior for the shell component it would be given also Chen et al. [10]. 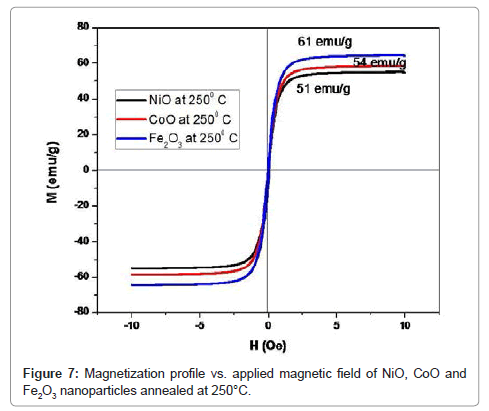 NiO, Fe2O3 and CoO were successfully synthesised by biosynthesis method. The effect of annealing temperatures at 250°C on their comparative structural and morphological properties of metal oxides was investigated using X-ray diffraction and Scanning Electron Microscopy and Transmission Electron Microscopy respectively. In addition, the characterizations, analysis and simulation studies recommended these three unstable metal oxides were very much helpful for magnetic and biological applications.