Copyright: © 2016 Kannangara S, et al. This is an open-a ccess article distributed under the terms of the Creative Commons Attribution License, which permits unrestricted use, distribution, and reproduction in any medium, provided the original author and source are credited.

Air pollution is one of the major problems arising in the modern world and it can be due to many anthropogenic chemical compounds. Out of these air pollutants, aromatic hydrocarbons (AH) play a special role as hazardous chemicals due to high carcinogenicity and genotoxicity to all living beings [1]. Main source of these chemicals to the air are vehicular emission, industrial processes and oil refinery processes which are increasing day by day as a consequence of urbanization and industrialization [2]. These AH pollutants in the ambient air deposit on the ground level, mainly leaf surfaces soil and other substrates through wet and dry depositions. As reported in literature, many of the microorganisms inhabiting the polluted soil and leaf surfaces have special ability to degrade such kind of AH pollutants [3]. Especially, lignolytic and non-lignolytic fungi have special ability to degrade AH pollutants into the non-polluted level using various types of enzymes like oxidasese and peroxidases.

Many studies have focused on the ability of litter-decomposing fungi [4-6] and non-lignolytic fungi [7], which could also metabolize a variety of PAHs to polar metabolites. Capability of wood decaying fungi to detoxify polycyclic aromatic hydrocarbons (PAHs) has been studied extensively [8] and the majority of these studies have focused on white rot fungi [9-14]. Particularly Phanerochaete chrysosporium [15-17]. Phanerochaete chrysosporium, are wood decomposing basidiomycetes that can degrade not only lignin but also a broad spectrum of recalcitrant environmental organopollutants, including PAHs that are not readily degraded by other microorganisms [11]. This degradative activity is due to the lignin-degrading systems of these fungi, which is regulated by array of enzymes such as lignin peroxidase, manganese peroxidase and laccase [18].

Lignin peroxidase (Lip) is a haem containing peroxidase with an unusually high redox potential. It is highly glycosylated as most enzymes are secreted for extracellular action. Most but not all white rot species produce it [19]. LiP is able to oxidize aromatic compounds with redox potentials higher than 1.4V (NHE) by single-electron abstraction, but the exact redox mechanism is still poorly understood [20]. Manganese peroxidase (Mnp) is also haem containing and is generally considered to be essential for lignin degradation. MnP is an extracellular heme enzyme which is common in lignin-degrading basidiomycetes fungi. Other than basidiomycetes some ascomycetes are also able to degrade aromatic hydrocarbons using these lignolitic enzymes. In fact, Trichoderma hazianum isolated from three different sources, soil, compost and rotting wood from Poland demonstrated the potential in degrading aromatic hydrocarbonic compounds using lignolitic enzymes [21]. Even though most of the fungal species belong to basidiomycota and Ascomycota have amylases, lignases, pectinases and cellulases enzymes which degrade mostly many polypeptides they also involve in degradation of aromatic pollutants deposited on the ground level [12]. Many studies on Fusarium spp. have shown their capability to degrade high molecular-weight organic compounds such as coal cellulose, xylan, pectin and different hydrocarbons [22] as well as PAHs [23].

Leaf phyllosphere is one of the major exposing surfaces to these hazardous pollutants. The phyllosphere represents the largest biosphere-atmosphere inter-phase on the earth and is dominated by leaves. Like other biological surfaces, the phyllosphere harbors a large number of diverse microorganisms, including bacteria, yeasts, oomycetes, fungi, and algae [25].

As stated by Ref. [24] many of leaf phyllosphere bacteria as well as fungi showed in vitro degradation of aromatic hydrocarbons. As per literature, little has been known about the AHs degradation by phyllosphere fungi for tropical situations compared to temperate situations. Also the enzymes involved in degrading these aromatic hydrocarbons have not been studied extensively. Therefore, the objective of the present research was to characterize the extracellular enzymes involve in the naphthalene, phenanthrene, xylene and toluene degradation by selected AH degrading phyllosphere fungi that inhabit the phyllosphere of four ornamental plants (Ixora chinensis, Ervatamia divaricata, Hibiscus rosa-sinensis and Amaranthus cruentus) grown in the five polluted sites (Colombo Fort, Orugodawattha, Maradana, Panchikawattha and Sapugaskanda) in Sri Lanka.

Isolation of phyllosphere fungi and the screening of AH degradation

Isolation of AH degrading phyllosphere fungi was carried out as described in Ref. [24]. Potential of the isolated AH degrading fungi were evaluated using plate assays, colorimetric methods and HPLC analysis.

Erlynmeyer flasks (100 ml) containing BBH broth medium (50 ml) with pure aromatic hydrocarbons; naphthalene, phenanthrene, xylene and toluene (5 gl-1) were separately autoclaved at 121°C for 15 minutes. Two agar plugs (1 cm2) from the periphery of 7 days old pure cultures of each fungal species grown on Czapek-Dox agar were inoculated into the sterilized flasks with the broth medium. The flasks were then incubated at room temperature (28 ± 2°C) for 10 days. Then the content was filtered using a filter paper (Watman No.4) and filtrate was obtained. This filtrate was then used for measuring the extracellular lignolytic enzyme activities (Mnp, Lip and laccases). This experiment was carried out in six replicates [26-28].

Laccases (Phenol oxidases) activity was determined at 470 nm (εmax=6,740 mol-1cm-1) using guaiacol as the substrate. The enzyme reaction was performed in 1 ml volumes containing acetate buffer (pH=5.0, 10 × 10-3 moll-1), guaiacol (2 × 10-3 moll-1) and properly diluted enzyme solution (0.1 ml) and then the mixture was incubated at 50°C for 30 minutes. In the blank, guaiacol was replaced with acetate buffer. One unit of enzyme activity was defined as the amount of enzyme oxidizing 1 μmol of substrate per minute under the assay conditions [28].

The following equation was used to express the enzyme activities in μmol of substrate oxidized per milliliter per minute.

The enzyme activities of amylases, lignases, pectinases and cellulases responsible for the biodegradation of starch, lignin, pectin and celluloses

The pectin, starch, cellulose and lignin degradation ability of isolated fungi using the fungal enzymes in the presence of AHs in the medium was observed following the methods given in Ref. [29,30].

The isolated phyllosphere fungal species were grown on basal medium of Ref. [31] supplemented with 1% cellulose powder and 1% AH (phenanthrene, naphthalene, xylene and toluene). Subsequently, fungi inoculated test tubes were incubated at room temperature (28 ± 2°C) for a month and then the observations were taken at weekly intervals. Cellulose utilization of the fungal species was detected using the clear zones around the actively growing colonies [30,31].

Starch degradation through the amylase activity was assessed using Difco nutrient agar supplemented with 5% starch and 1% AH (phenanthrene, naphthalene, xylene and toluene) [29]. These starch agar plates were inoculated separately with isolated fungal species and incubated at room temperature (28 ± 2°C) for five days. After the incubation period test plates were flooded with 1% KI/I2 solution to observe the amylolytic activity indicated by the production of clear zones around the active growing colonies [30].

Pectin degradation of isolated fungi using two enzymes; polygalacturonase and pectatelyase was assessed using mineral nutrient agar plates which contained the basal medium of Ref. [31], 0.5% of liquid citrus pectin and 1% AH (phenanthrene, naphthalene, xylene and toluene) [30]. Two sets of plates were prepared, one set of plates was adjusted to pH 5 and the other pH 7 to observe optimal polygalacturonase activity (at pH 5) and pectatelyase activity (at pH 7) using a pH meter (Model- Eutech Cyber Scan PC 510). Plates of each type of pectin agar were then inoculated separately with each isolated phyllosphere fungus. After 7 days’ incubation period at room temperature (28 ± 2°C), all the plates were flooded with 1% cetavlon solution (cetyltrimethyl ammonium bromide) which precipitated the intact pectin in the medium. Clear zones around the active colonies indicated pectin utilization ability of selected fungal strains [30].

The degradation of lignin by three enzymes, laccase, peroxidase and tyrosinase, was assessed by growing isolated fungi on malt extract agar (pH 7) supplemented with 1% AH (phenanthrene, naphthalene, xylene and toluene). After the 7 days’ incubation period at room temperature (28 ± 2°C), observations were taken using the drop tests [32]. Six replicates were carried out for each fungal species. The methods for the drop tests were given below.

A test solution of 0.1M Napthol was prepared in 96% ethanol. Drops from this solution were tested on the active marginal hyphae of each of the test fungal species using a pasture pipette. Diffusion of purplish coloration into the medium indicated the presence of laccase [33].

Data presented for enzyme activities were the means of six replicates. The SPSS 16.0 software was used in determination of standard error (SE) and least significant difference (LSD), ANOVA.

The enzyme activities of amylases, lignases, pectinases and cellulases responsible for the biodegradation of starch, lignin, pectin and celluloses

Present study clearly showed the monoaromatic hydrocarbon degraders also had the potential to secrete cellulose and starch degrading enzymes cellulases (Figure 5) and amylases (Figure 6) respectively. But the fungi (Penicillium oxalicum, Colletritichum ciamense and Aspergillus aculateas) that could degrade phenanthrene and naphthalene lack any of these enzymes whereas both of the polyaromatic and monoaromatic hydrocarbon degraders had the ability in secreting pectin degrading polygalacturanase and pectatelyase like enzymes. Further were able to degrade lignin using lignin degrading enzymes as laccase, peroxidase and tyrosinase (Table 1; Figure 7). 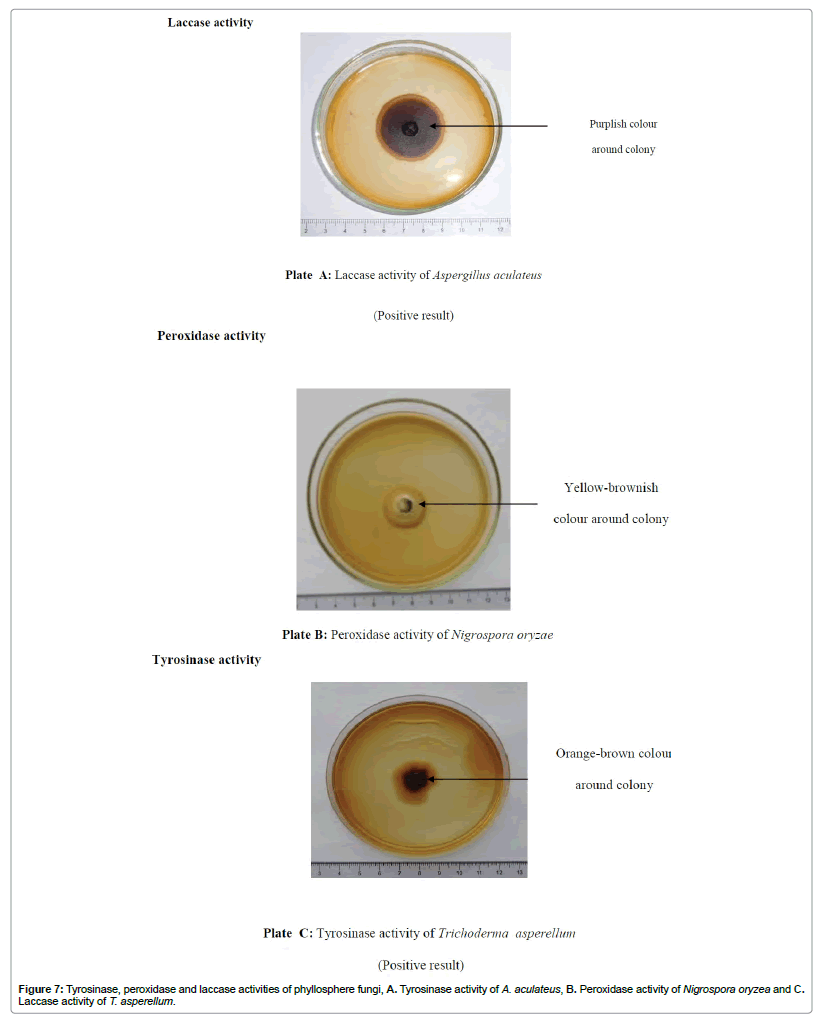 Microorganisms have evolved in such a way for several enzymes capable for degrading the different polymers. These enzymes include cellulases (for degrading the cellulose), xylanases (for degrading the hemicellulose), and ligninolytic enzymes (for degrading the lignin). There are two major families of ligninolytic enzymes which are involved in lignolysis: peroxidases and laccases [21,34-36]. Out of these lignolitic enzymes, Mnp, Lip and laccase enzymes are predominant in aromatic hydocarbonic degradation activity of fungal species [35]. As per the HPLC results of a research carried out by Ref. [24] Penicillium oxalicum, Coletritichum ciamense and Aspergillus aculateus were the best aromatic hydrocarbon degraders and during the aromatic hydrocarbon degradation process all these fungal strains demonstrated significant Mnp, Lip and laccase enzyme activities in the medium.

These results revealed the involvement of lignolitic enzymes in the process of aromatic hydrocarbon degradation.

Many studies on Fusarium spp. have shown their capability to degrade highmolecular-weight organic compounds such as coal cellulose, xylan, pectin, different hydrocarbons [22] as well as PAHs [23]. As investigated in the present research monoaromatic fungal degraders also demonstrated amylase and cellulase activities more than the lignolytic enzymes. Many of the polyaromatic degraders lack such kind of enzymes. However, they had pectin degrading enzymes at a significant level. The reason for this may be, due to their adaptations to degrade mostly the AHs like complex structures using lignolitic and pectin degrading enzymes rather than the degradation of comparatively simple substrates such as cellulose and starch.

In summary, the present investigation can be considered as the first reported experiment conducted in Sri Lanka which explored the enzyme activities especially Mnp, Lip and laccases activities of phyllosphere fungal strains during the biodegradation of AHs (phenanthrene, naphthalene, toluene and xylene). Findings of the research also opens several avenues for further experiments in the relevant field and also indicate the possibility of the use of the efficient AH degraders in remediating the aromatic hydrocarbon pollutants from environmental sites where high contamination prevails.

Authors have no conflict of interests of any nature to state in this section.