Copyright: © 2014 Jamali H, et al. This is an open-access article distributed under the terms of the Creative Commons Attribution License, which permits unrestricted use, distribution, and reproduction in any medium, provided the original author and source are credited.

This study was carried out to evaluate the effect of Probiotic (Bacillus spp.) on growth and survival rate and nitrogenous excretion in Rainbow Trout (Oncorhynchus mykiss) larvae. Rainbow Trout larvae were fed on Artemia parthenogenetica nauplii enriched at suspension of five probiotic bacilli at doses of 0, 1×108, 2×108 and 3×108 (CFU l-1).The feeding level was 30 percent of total biomass per day. The daily ration was divided into four feeding portions. The end all the trout larvae were sampled for biometry and growth determination. Feces were collected twice a day by pipetting and ammonia and urea contents in each tank were determined. Results showed that, with the inoculating of probiotic Bacilli in suspension of broth, trout larvae survival and growth parameters generally increased. Fish larvae fed with enriched Artemia nauplii at dose of 2×108 CFU l-1 in suspension of broth had significantly higher survival and growth parameters than the control group (p<0.05). Ammonia excretion, urea excretion and fecal production decreased in experimental treatments (p<0.05). Then, our results confirm the potential of probiotic bacillus had promoted effects on enhancement of survival rate and growth performance in experimental treatments and probiotics can reduce ammonia and urea excretion in Rainbow trout larvae.

Rainbow trout culture is economically important in Iran and bacterial infectious disease in trout farming seems to be the major reason for decreasing the production level in some farms. Success and failure of fish culture programs are determined by early life stage conditions [1]. On the other hand, the occurrence of sub-clinical infections under farming conditions probably lead into reduced growth and increased mortality [2]. Probiotics are a cultured product or live microbial feed supplement, which beneficially affects the host by improving its intestinal balance and health of the host [3]. Most studies with probiotics conducted to date in fish have been undertaken with microbial strains isolated and selected from aquatic environments. There are a wide range of microalgae (Tetraselmis), yeast (Debaryomyces , Phaffia and Saccharomyces), gram positive (Bacillus, Lactococcus , Micrococcus, Carnobacterium, Enterococcus, Lactobacillus, Streptcoccus , Weisslla) and gram negative bacteria (Aeromonas, Alteromonas , Photorhodobacterium , Pseudomonas and Vibrio) that have been evaluated as a probiotic in aquaculture [4]. Probiotics in aquaculture have been shown to have several modes of action: competitive exclusion of pathogenic bacteria through the production of inhibitory compounds; improvement of water quality; enhancement of immune response of host species and enhancement of nutrition of host species through the production of supplemental digestive enzymes [5]. Because Bacillus bacteria secrete many exoenzymes [6], these bacteria have been used widely as putative probiotics. Some works have been done to evaluate competitive exclusion of potential probiotics on rainbow trout [7-9].

Stimulation of immune system in rainbow trout with several candidate probiotics has also been evaluated by some researchers [7,10-12]. The present study examined the effects of probiotic Bacillus spp. on growth and survival in Oncorhynchus mykiss larvae, when the Bacillus spp. were bioencapsulated within Artemia parthenogenetica.

The probiotic Bacillus was prepared from the commercial product Protexin aquatic (Iran-Nikotak), which is a blend of five Bacillus species. The blend of probiotic Bacilli (Bacillus licheniformis , B. subtilis , B. polymixa , B. laterosporus and B. circulans) from suspension of spores with special media were provided. Three concentrations of bacterial suspensions, 1×108, 2×108 and 3×108 bacteria per liter (CFU l-1) were provided by Protexin Co. and the colony forming unit (CFU) of probiotic Bacilli were tested by microbial culture in Tryptic Soy Agar (TSA) [13].

The Artemia parthenogenetica had been collected from the Lake Maharloo. The Artemia parthenogenetica were bioencapsulated in three doses of bacterial suspensions for 10 h at 29 ± 1oC, in glass con with 1 liter of seawater (30 gl-1 salinity) at a density of 2.0 g l-1 with constant illumination and oxygenated through by setting air pump [14]. The bioencapsulated nauplii were used as a vector to carry probiotic bacillus to digestive system of Oncorhynchus mykiss larvae. The Artemia parthenogenetica at a density of 2 g live Artemia litter-1 was held in a broth suspension with Bacillus licheniformis , B. subtilis , B. polymixa , B. laterosporus and B. circulans at densities of 1×108, 2×108 and 3×108 bacteria per liter for 10 hours.

This experiment was conducted in a completely randomized design with four treatments (three probiotic levels and a control), and three replicates per treatment for a total of twelve fiberglass tanks (each with a capacity of 10 liters). Larvae of Oncorhynchus mykiss (initial weight: 176 mg) were obtained from Hatchery of Zamiry center, Golestan, Iran. The density of fish larvae in per tank were 40 fish. Rainbow Trout larvae in control and experimental treatments were fed 30 percent of their body weight for 4 times a day (6.00, 12.00, 18.00 and 22.00).The control treatment was fed unbioencapsulated Artemia parthenogenetica. Water quality parameters of input water to rearing system were monitored each week throughout the experimental. The water temperature was 14 to 16°C, pH was 7.85 ± 0.26 and water oxygen level was maintained above 7.65 ± 0.55 mg l-1 during the experiment an electrical air pump.

Feces were collected twice a day by pipetting, oven dried at 70°C, weighed, at the beginning and end of which period, water was sampled, and ammonia and urea contents in each tank were determined by the method of Chaney and Marbach [15] and converted into energy by multiplying by 24.83 kJ g-1 for ammonia and 23.03 kJ g-1 for urea [16]. Potential loss of nitrogenous compounds through bacterial action or diffusion was quantified by setting controls without fish and the value was used to adjust determined nitrogenous excretion. 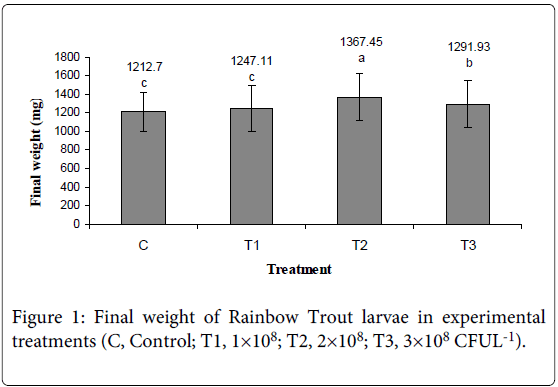 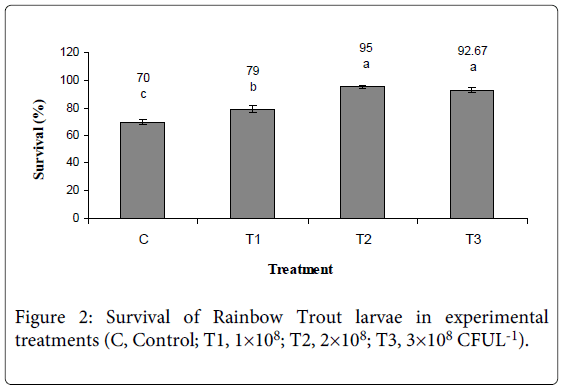 Final weight, Survival and Specific growth rate was affected significantly by probiotic bacillus and higher rate observed in 2×108 CFUL-1 treatment. The advantages of using probiotics in fish aquaculture were recently reviewed by Nayak [19] and Qi et al. [20]. The main beneficial effects of probiotic use in fish aquaculture are growth performance improvement [21,22] and disease control through immunity enhancement [19,20,23] and pathogens exclusion [20]. The bacteria could also have improved digestive activity via synthesis of vitamins and cofactors or via enzymatic improvement [4]. Among probiotics, Bacillus strains have become more and more popular and widely used in fish aquaculture [19,20,24]. In the use of live prey, Artemia nauplii are widely recognized as the best natural storable live feed available and are extensively used in marine finfish and crustacean hatcheries throughout the world because of their nutritional and operational advantages [25,26] and have been used as a vector for the carrying of different materials, including probiotics [27].

In this study, Artemia parthenogenetica were used as a vector to carry the probiotic Bacillus to the digestive tract of Rainbow Trout larvae. The probiotics in this experiment promoted the feeding and growth parameters in Rainbow Trout larvae in experimental treatments in comparison to control treatment. Effects of commercial probiotic on aquaculture has been investigated by researchers, and some of this research has not shown any positive effects on growth parameters or survival rate or any promising result on the cultural condition. For instance, Shariff et al. [28] found that treatment of Penaeus monodon with a commercial Bacillus probiotic did not significantly increase survival. These results disagree with our findings.

Results of all the probiotic treatments showed better growth performance and feeding parameters than the control. The beneficial effect of probiotic Bacillus sp. on the feeding efficiency of Rainbow Trout larvae was completely observed. The results indicated that the probiotic bacillus had significantly effects on the growth and feeding parameters in experimental treatments. The better body weight and SGR for weight, protein and energy were obtained in experimental treatments also better Feed conversion efficiency in wet weight, dry weight, protein and energy of larvae Rainbow Trout were obtained in experimental treatments. Similar finding were observed by Gatesoupe [29] in using Bacillus toyoi on turbot (Scophthalmus maximus), Swain et al. [30] in Indian carps that improved the growth factors and feeding performance and Ghosh et al. [31] on the Rohu. Bagheri et al. [32] found that supplementation of trout starter diet with the proper density of commercial Bacillus probiotic could be beneficial for growth and survival of rainbow trout fry. This finding agrees with our results. Ghosh et al. [1] indicated that the B.circulans, B. subtilis and B. pamilus, isolated from the gut of Rohu, have extracellular protease, amylase, and cellulose and play an important role in the nutrition of Rohu fingerlings. The photosynthetic bacteria and Bacillus sp. (isolated from the pond of common carp) was used in diet of common carp (Cyprinus carpio) by Yanbo and Zirong [33]. The results indicated that this probiotics increased growth parameters and digestive enzyme activities. Gram-positive bacteria, including members of the genus Bacillus, secret a wide range of exoenzymes [6], which might have supplied digestive enzymes and certain essential nutrients to promote better growth. Bacillus subtilis and B. leicheniformis can break down proteins and carbohydrates [34,35]. So it can be suggested that administration of Bacillus bacteria to trout fry results in enhanced digestion of food and improved growth [32].

There were significant (p <0.05) differences in dry matter, crude protein and crude lipid of O. mykiss between experimental treatments and control. Crude lipid and Gross energy were decreased in experimental treatments while crude protein was increased. Results showed that crude lipid and moisture of Rainbow Trout decreased in experimental treatments after feeding with probiotic while crude protein were increased [32,36]. El-dakar [37] reported that use of a dietary probiotic/prebiotic on Spinefoot rabbitfish (Siganus rivulatus) Although significant differences in moisture level and crude protein proportion are apparent among treatments, they do not follow a trend and thus suggest that variations among results are probably due to inherent variation associated with using wild undomesticated gene stock in research. However, results suggest a positive correlation between NEM supplementation and lipid concentration of the carcass.

Ammonia excretion, urea excretion and fecal production decreased in experimental treatments when larvae were fed by bioencapsulated Artemia parthenogenetica. Faramarzi [38] showed that ammonia and urea excretion were decreased in experimental treatments by inclusion of the probiotic bacilli in comparison with control treatments in Acipenser percicus larvae. Ammonia excretion rates are directly related to dietary nitrogen and protein intake in teleosts [39,40]. Increasing the dietary level of non-protein, digestible energy increases nitrogen retention by decreasing nitrogen losses [41,42]. The decrease in NH3-N concentration in this study appears to be the result of increased incorporation of ammonia into microbial protein, and may be the direct result of stimulated microbial activity [43]. Lashkarboloki [44] showed that enrichment of daphnia with Saccharomyces cerevisiae extract (Amax) probiotics can reduce ammonia and urea excretion and also cause increase protein retention in Acipenser percicus larvae body notably. The results of these studies showed that the blend of bacterial probiotics can increase the growth and feeding efficiency and also decrease ammonia and urea excretion in fish of experimental treatments in comparison of control.