Copyright: © 2015 Sanudi F, et al. This is an open-access article distributed under the terms of the Creative Commons Attribution License, which permits unrestricted use, distribution, and reproduction in any medium, provided the original author and source are credited.

A study was undertaken to determine the effects of stocking density and type of feed on growth of mono-sex culture of improved strain of Oreochromis shiranus reared in tanks. The fish stocked at 3 fish/m2 and 5 fish/m2 replicated three times were randomly assigned to Malawi Gold Standard (MGS) and maize bran (MB) diets. The fish were cultured for 42 days. Results showed that the mean weight gain and gain in standard length were inversely proportional with stocking density. Treatments fed MGS and a stocking density of 3 fish/m2 had higher mean body weight gain (4.37 ± 0.284 g) and standard length gain (3.07 ± 0.111 cm) compared to 2.60 g and (2.25 ± 0.120 cm) for weigh gain and gain in length for treatments fed MB at 5 fish/m2 respectively. There were significant differences (P<0.001) between treatments fed MGS and MB in terms of mean weight gain and standard body length. The study also determined the rate of survival in the different treatments. The highest survival rate was in MGS and 3 fish/m2 (94.7%) while the least was in MB and 5 fish/m2 (87.1%). This study shows that stocking density and feed affect growth of mono-sex culture of improved strains of O. shiranus reared in tanks. MGS and stocking density of 3 fish/m2 gave the best results. However, for resource limited farmers a recommendation of 3 fish/m2 and MB can be made to achieve 2.59 cm gain in length and 2.78 g gain in weight instead.

Fish contributes about 72% of animal protein in people’s diets [1] and the fish industry employs more than 600,000 people. Fish is thus of paramount importance to food and economic security of Malawian citizenry. However, fish catches have declined in the natural water bodies, consequently there has been a decrease in the per capita fish consumption from 14.9 kg to about 5.6 kg between 1970s and 2011. The decrease in the per capita fish protein supply is dangerous to the health and economic security of Malawians. Aquaculture is therefore considered a remedy to counteract the decreasing fish catches from the wild water bodies. Aquaculture production is dependent on a number of factors such as stocking density, quality of feeds, good husbandry practice and the fish stock.

In Malawi, the most cultured fish species are tilapias as they have excellent aquaculture potential owing to their herbivorous and omnivorous feeding habits, high tolerance to diseases and parasites [2]. Tilapias are the easiest fish to culture and ideal for small farmers as well as industrial scale aquaculture [3]. Two tilapia genera cultured in Malawi are Tilapia species which are macrophagous and substrate spawners and Oreochromis species which are microphagous and mouth brooders.

Russell et al. (2008) pointed out that Oreochromis shiranus is one of the currently farmed species in both smallholder and commercial aquaculture. Being one of the commercially important species, this study focused on this species which is cultured by over 90% of the fish farmers in Malawi. In 2007 Maluwa and Gjerde improved the species by mass selection (MAS) [4]. The selection achieved 37% increase in growth after two generations. The growth performance of mono-sex culture of this improved strain kept at different densities given different kinds of feed was studied to recommend the optimum stocking density using a particular feed (Malawi Gold Standard or maize bran).

Tilapia grows and reproduces in a wide range of environmental conditions and tolerates stress induced by handling [5]. This allows easy and rapid propagation of the fish in various environmental conditions, but can as well be a source of problem within a limited environment. Uncontrolled multiplication of the fish not only reduces genetic diversity of the system but also produces dwarf fish population of poor market value.

Problems common for many tilapia culture systems are the reduction of growth rates at the onset of sexual maturity and precocious and excessive reproduction [6]. There are a number of ways to control reproduction in mixed-sex populations, one of which is the culture of all male tilapia. The mono-sex culture of male populations of tilapia is desirable as reported by Pillay (1993) because of its ability to increase production potential and lower management requirements [7].

The mono-sex culture of sexually reversed O. shiranus combined with the appropriate stocking density and feed can lead to increased production in the different culture systems and hence act as a stable source of fish protein to supplement the declining catches in the wild water bodies.

Water quality parameters that were measured were water temperature, dissolved oxygen, and ph. These parameters were measured in the morning around 8.00 a.m. and late in the afternoon around 4.00 p.m.

Data was entered on a Microsoft Excel at the end of each sampling. Body weight and length were compared using univariate analysis of variance using Statistical Package for Social Scientists (version 16.0).

Wo is initial weight(g)

t is culture period in days

The hypothesis of no significant difference between mean of four treatments was accepted or rejected using 95% significance interval. After that, Post hoc analysis using Duncan test was used to separate means.

The fish stocked at a stocking density of 3 fish per square metre and fed MGS registered the highest gain in body weight and standard length (Table 1).

Stocking density of 3 fish/m2 and maize bran as feed

The fish stocked at 5 fish/m2 and given Malawi Gold Standard as feed attained a mean body weight and standard length of 5.45 ± 2.95 and 5.18 ± 0.122 respectively (Table 1). The growth was reduced as compared to the treatment given the same feed but stocked at a stocking density of 3 fish/m2. The mean weight gain in this treatment was close to that observed using maize bran as feed at a stocking density of 3 fish/m2 (Table 1).

Stocking density of 5 fish/m2 and maize bran as feed

In this treatment the least growth was observed as compared to all the other treatments. The treatment had a mean body weight of 4.53 ± 2.47 (Table 1), a mean which is least among all the treatments and it also had the least standard length.

Comparison of all treatments 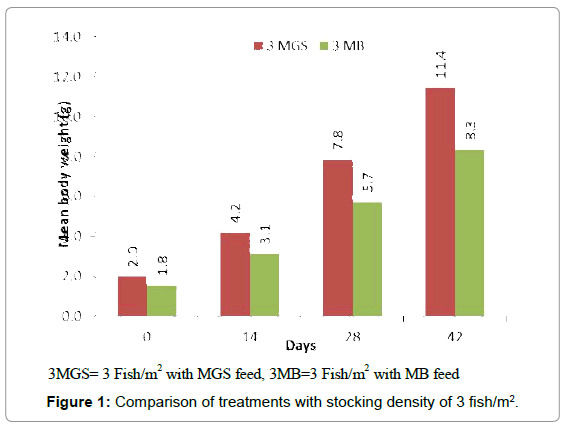 Figure 1: Comparison of treatments with stocking density of 3 fish/m2.

The growth of an organism is said to be contributed by the genetic makeup of the organism and the environment [3]. The differences in growth in this study can be attributed to the differences in stocking density and feed since the environment of the experiment were constant for all the treatments. The results of this study show that there were significant differences (P<0.001, Table 1) between treatments fed Malawi Gold Standard and maize bran in terms of mean weight gain and standard body length. The observations show that body weight and standard length gain were greatest in treatments with Malawi Gold Standard as feed compared to treatments where maize bran was given as feed. This high increase in weight is attributed to the high average crude protein in Malawi Gold standard (CP=18%) as compared to maize bran. This is the case because there is a positive relationship between the quality of feed and the output obtained in aquaculture.

The results also show that there was greater growth in treatments with low stocking density as compared with treatments with a higher density. The effect of stocking density among the treatments had significant differences (P<0.001, Table 1). This difference in growth is attributed to social interactions through competition for food and space which negatively affect fish growth. Therefore higher stocking densities lead to increased stress and consequent increase in energy requirements causing a reduction in growth rates and food utilization. These findings are in line with what was reported by [3,8]. 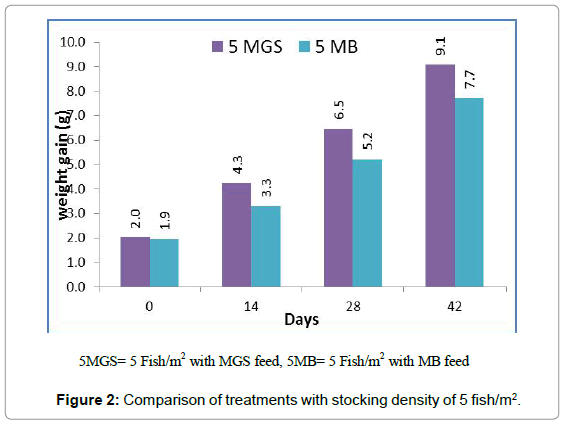 Figure 2: Comparison of treatments with stocking density of 5 fish/m2.

The test also indicated that there were no significant differences at (P<0.05) between treatments with stocking density of 3 fish/m2 and 5 fish/m2 given maize bran as feed though direct observation showed differences. This can be attributed to the survival of the fish in the tanks stocked at 5 fish/m2 which registered much mortality during stocking and sampling.

These findings on body weight are also in line with Charles (2001) who observed that poor weight gain in Oreochromis shiranus [9] stocked at a higher density becomes a source of stress and the fish needs to use energy stored in the body tissue as protein hence reduced growth (Figure 3). The findings of this research also agree with Garr et al. (2011); Mazlum, 2007 and Zhu et al. (2011), who observed that fish stocking density is one of the most important parameters affecting fish growth and health in a number of ways [10-12]. Pouey et al. (2011), Sorphea et al. 2010 reported those growth performance and survival rates are adversely affected by high stocking densities. It is evident that growth of fish is enhanced at lower stocking densities as demonstrated in the treatment with stocking density of 3 fish/m2 which was higher throughout the study period [13,14]. This is in agreement with Yousif (2002) who reported that it is a generally accepted principle that increasing the number of fish (density) will adversely decrease growth. The observation of decrease in growth with increase of stocking density also corresponds to observations reported by Breine et al. (1996) [15,16]. 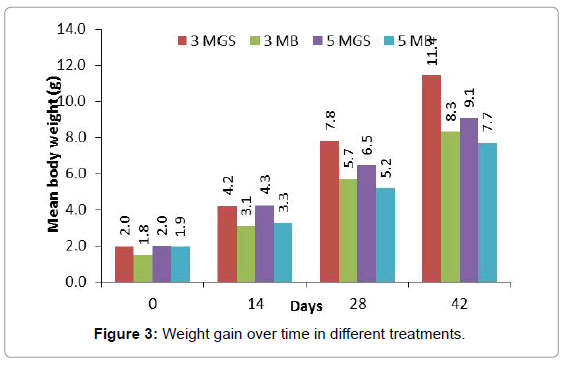 Specific growth rate and feed conversion efficiency were different in the various treatments (Table 4), with good SGR and FCR in treatments with low stocking density and given MGS as feed as compared to treatments given maize bran as feed.

Furthermore, average resource fish farmers, can use MGS at a stocking density of 5 fish/m2 to achieve a reasonable yield in each rearing period.

I also acknowledge the support from technical staff at National Aquaculture Centre for their technical support.