Copyright: © 2015 Ndau LJ, et al. This is an open-access article distributed under the terms of the Creative Commons Attribution License, which permits unrestricted use, distribution, and reproduction in any medium, provided the original author and source are credited.

The demand to substitute fishmeal in Fish feed has necessitated with the use of plant-derived Feedstuffs. Though, problems of anti-nutritional factors in these feedstuffs have limited their usage and assimilation into fish feed formulation. Different processing approaches have been applied to remove or reduce the level of these anti nutrition factors in these plant- derived feedstuffs. In this study Pigeon peas (Cajanus Cajan L) were soaked in cold water (1:3 w/v) for 24 hours. Effect of soaked Pigeon peas on the growth of Nile tilapia; Oreochromis niloticus was then evaluated for a period of 54 days. Seven diets (three diets of raw pigeon peas and soaked pigeon peas and one control diet) were formulated to contain about 30% crude protein. Fishmeal was replaced by 0% (control), 15%, 30% and 45% for both raw and soaked pigeon peas. Results obtained in this study showed that growth and feed utilization of fish fed diets containing raw Pigeon peas seed meal decreased significantly (P>0.05) with increased dietary levels of raw Pigeon peas While significant results (P<0.05) were are shown for fish fed soaked Pigeon peas seed meal with 45% level inclusion performing best next to control. It was therefore concluded that whenever the cost of Pigeon peas is lesser than fish meal, Pigeon peas can be soaked for 24 hours with a ratio of 1:3 w/v to replace up to 45% fish meal in fish diets as a way of reducing the current demand pressure on fish meal

Tilapias are tropical cichlid teleosts native to Africa, the Mediterranean, and the Middle East. Tilapias are some of the oldest cultured fishes, as illustrated in Line drawings found in Egyptian tombs that date back to 2000 BC. Tilapia is the second mainly important farmed fish after the carps [1].

The Growth of Tilapia in different parts of the world has increased exponentially in recent years. Many factors explain to why tilapia is globally cultured. These are: adaptive capability to a variety of environmental conditions, acceptance of a wide broad spectrum of diets and are low on the food chain, palatability, ability to reproduce in captivity and low expense relative to other finfishes.

High nutritional value due to a well-balanced amino acid profile, low in fat and saturated fat, omega-3 fatty acids, calories, carbohydrates high amount of vitamins and minerals has been accounted as a major factor which makes Tilapia to be liked by people all around the world [2,3].

Likewise, fish meat is usually affectionate because it contains less connective protein tissue than other meats from beef, mutton, pork, and poultry. For this reason it is easy to chew up, particularly for children and the elderly [4].

More than 93% of the total fish production in developing countries has been reported to be contributed by omnivorous and herbivorous fish species such as carps and tilapia. As production of these fish species step up, feed inputs and nutritionally balanced diets are required. Fishmeal has been used as a source of protein in formulating the balanced fish diets. The estimations that have done by many researchers suggest that the amount of feeds for fish will increase at a rate of 93% by 2012 to give the massive production of farmed fish especially in developing countries. This suggests that fishmeal demand, as a source of protein will increase. To reduce this increase in fishmeal demand, different fish feed ingredients have been evaluated. El-Sayed and Tacon; El-Sayed [5,6]; reported that ingredients can either be animal protein sources – by products such as blood meal, bone meal and hydrolyzed or Plant protein sources such as soybean meal, cottonseed meal, Pigeon peas and groundnut meal. Based on affordability, local availability and good nutritional profile, Pigeon peas (Cajanus cajan L) have been acknowledged as a potential source of protein in aqua feed formulation.

Nevertheless the use of Pigeon peas is limited by the presence of ant- nutritional factors such as protease inhibitors, Amylase inhibitors, Oligosaccharides and poly phenol.

Table 1: Composition of mineral used in the experimental diets.

In attempting to remove anti- nutritional factors, seeds were soaked by dipping them in cold water in plastic container for 24 hours with soaking ratio of 100 g/300 ml (1:3w/v) at room temperature. After soaking, the seeds were oven dried at 60°C for 24 hours. Maize brain and Pigeon peas were milled by using milling machine and stored in name labelled containers prior to analysis.

Chemical composition to determine composition of raw and soaked Pigeon peas seeds was carried out according to standard method adopted by Association of Official Analytical Chemists (AOAC) [7]. Moisture content was determined by drying samples in an oven at 70°C for 48 hours.

Crude protein was determined according to Kjeldah method. Samples were digested in concentrated sulphuric acid by a digestor, distillated and titrated to obtained nitrogen. Crude protein was obtained by multiplying nitrogen content with conversion factor of 6.25. Crude fibre was determined by digesting a sample with weak base preceded by weak acid. Ankom 220 Fiber analyzer was used to determine the crude fibre.

Crude lipid was determined after soxhlet extraction of dried samples with 1.25% H2SO4 and 1.25% NaOH Ash content was determined by calcinations method. Samples which were previously oven dried were put in crucible and heat in a muffle furnace at 550°C for 3 hours and then cooled before weighing.

During compounding of diets, the weighed proportions of dry milled ingredients were carefully mixed by hand before adding water. The mixture was then passed through meat micer of 0.4 mm sieve size to make pellets.

During compounding of diets, the weighed proportions of dry milled ingredients were carefully mixed by hand before adding water. The mixture was then passed through meat micer with 0.4 mm sieve size to make pellets. Pellets were then dried by passing in the oven for 6 hours at 40°C and then spread on the floor under room temperature for one week prior to packaging. Composition of experimental Diets (g/100 g diet) is shown in Table 2.

The experimental design was a completely randomized design (CRD). 105 Nile tilapia fingerlings with initial average body weight of 15 g were randomly distributed in plastic buckets with a capacity of 20 litres at a stocking density of 5 Nile tilapia per bucket.

Fish were hand fed twice a day according their apatite; diets were given between 9.00 hours and 17:00 hours at 5% of body weight throughout the experiment. The quantity of feed was adjusted weekly based on the weight of fish to avoid feed wastage and deterioration of water quality parameters. A few remaining feeds at the end of the week were weighed to and used to estimate feed intake.

Fish were weighed prior to the start of each experiment to obtain fish of consistent size and weight. A top pan balance was used in weighing procedures. Fish were acclimated to Experimental environment for one week and fed control diet. After the acclimation time fish were netted from each plastic bucket using a fine mesh hand net and total weighed. The dietary treatments were at random assigned to the plastic buckets. Total weighing of experimental fish was done weekly throughout the experiment.

The study lasted for 8 weeks during which fish were fed the experimental diets containing Pigeon pea seed meal. Parameters measured were bulk initial weight, bulk final weight and feed intake. Weekly weight gain was measured to monitor growth while other parameters were calculated as described below:

N2 -Number of fish at the end of the experiment

N1 - Number of fish at the beginning of the experiment

Data collected from this experiment were subjected to one -way analysis of variance (ANOVA). Comparisons of treatment means were done by Turkey’s Honest at 5% level of significance. Analyses were performed using SPSS software versioN16.

This part presents the results of the experiment. First, the proximate composition results for both Raw and Soaked Pigeon Peas are presented followed by Growth Performance and Feed Utilization which include

The biochemical composition of unprocessed and processed Pigeon peas is shown in Table 3. In general soaking method led to reduction of dry matter, crude lipid, crude fibre and ash content. However there was slightly improvement of protein content. 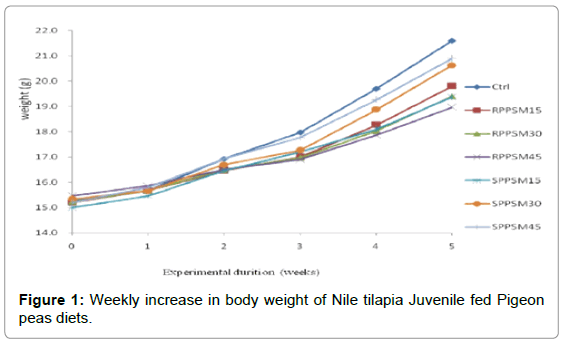 Table 4 describes the decreased performance with increased inclusion level of RPPSM. The decline in intake was accompanied by a considerable decline in growth in terms of final weights, average daily gain, and specific growth rate as well as feed utilization in terms of feed conversion ratio. No significant difference in fish survival between different dietary treatments was observed.

Processing of Pigeon peas using cold water led to the reduction of nutrients due to Nutritional change which caused losses of water soluble components such as carbohydrates and nitrogen. Valvearde et al., [8] detailed decrease in dry matter of beans after soaking. Low dry matter in soaked Pigeon peas than in raw Pigeon peas was reported by Apata and Kadam et al. [9] due to leaching during soaking. Contrasting these results is Akingbade et al. [10] who detailed that protein content of Jack Bean (Carnavalia ensiformis) Seeds increased from 88-92% after 96 hours of soaking in water

Moreover, processing of Pigeon peas by using cold water led to the reduction of crude lipid. Nevertheless it is within the value reported by Ravindran and Ravindran [13]; Siddhuragu et al., when two groups (A and B) of Mucuna seeds were soaked in water for 12 and 24 hours.

Low content a of ash in the soaked Pigeon peas could be explained by leaching of minerals despite the fact that it is still within the values reported by earlier studies [14,15]. Pigeon peas are known to contain mineral such Iron, Calcium, Manganese, magnesium and Zinc which tend to dissolve and hence leaching into soaking medium during the whole process of soaking.

Poor Performance in terms of growth and feed conversion ratio for fish fed diets containing raw Pigeon peas could also be attributed by presence. Protease inhibitors such as trypsin and chymotrypsin inhibitors. Faris and Singh [20] reported that these ant nutritional factors have ability to inhibit the activity of protein digestive enzymes within the gastro intestinal tract by binding to and precipitating these protein digestive enzymes thereby causing digestive losses. Again Antnutritional factors have been reported to have deleterious effects and can interfere with food utilization, health and production of catfish fed diets containing raw Pigeon peas [21]. Liener [22,23] recorded that protease inhibitors including trypsin are potential anti-nutrients and are known to decrease growth performance

Based on the results obtained from dietary composition of Pigeon peas, processing of Pigeon peas in cold water (1:3w/v) for 24 hours under room temperature has no significant influence on the nutritive value of Pigeon peas. However slightly reduction in dry matter, crude lipid and ash content has occurred.

We wish to acknowledge the Department of Animal science and production for generously providing experimental fish for this study.

We are also grateful to Mr. Mfui; Alute and Haji for their assistance they offered during the laboratory operations. We are thankful to Sharon (Editorial Assistant) and his panel for assistance, manuscript reviewing and preparation.